SCROLL DOWN FOR A PLAYLIST OF SONGS BY THE FEATURED SONGWRITERS

Along the way, he found inspiration, mentoring and support from a bevy of uber-talented Nashville tunesmiths who have honed and polished the art of songwriting.

As a result, Terry now has copyrighted 150 songs, has published two books of lyrics and music, and plans to release his second studio album at the end of September.

The Rockford resident continues to make regular trips to Nashville to record upwards of 21 songs a year, and in his 60s, insists, “My best years are ahead of me.” 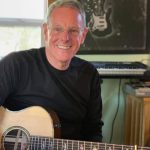 He credits the guidance of renowned songwriters such as the Grammy Award-winning Steve Leslie for spurring and refining his creativity – which is why he launched the West Michigan Songwriter’s Festival last year and will co-host the second edition of the event with Leslie at Belmont’s Blythefield Country Club on Friday and Saturday (Aug. 26-27).

Terry, an executive with Edward Jones, has made it his mission to showcase songwriting talent and share the wisdom of experienced writers with other musicians, hoping to educate dozens of artists in coming years through establishment of the Terry Tribe Scholarship Fund.

In between, Leslie will lead a 1 p.m. Saturday songwriting workshop, also at Blythefield, 5801 Northland Drive NE. 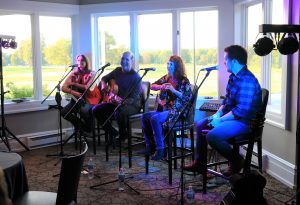 Leslie, Sutherland and Enderlin have impressive resumes, with their songs recorded by the likes of superstars Alan Jackson, Reba McEntire, Luke Bryan, George Strait, Darius Rucker, Trisha Yearwood and others over the years.

The weekend festival “is designed to raise awareness of songwriting as an art form, songwriters as artists and songwriting as a craft that everyone can learn to appreciate,” Terry said, adding that West Michigan has a “vibrant” music scene that he’d like to elevate even further. He also plans to stage a free workshop next spring.

Tickets for this weekend’s event are $25, which includes attendance at one of the evening performances as well as the Saturday afternoon workshop. Seating is limited. Find tickets online at westmichigansongwritersfestival.com.