In honor of this week’s #SaveMIStages campaign, Local Spins’ publisher offers up tracks from the best past performances at West Michigan concert venues which have been closed due to COVID-19. 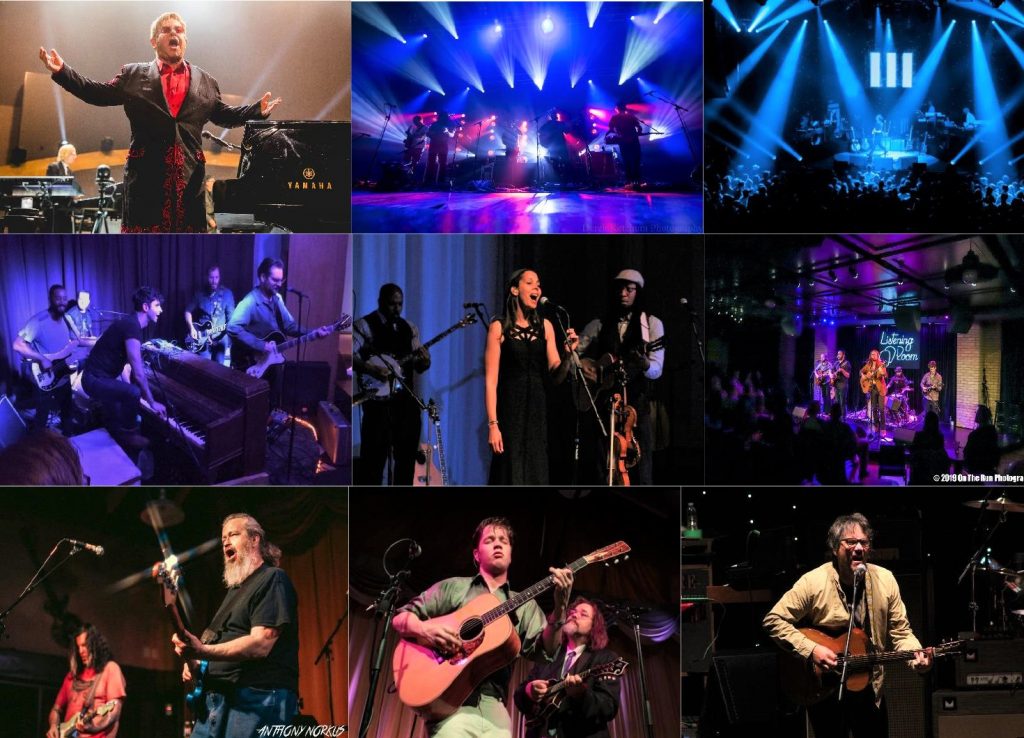 EDITOR’S NOTE: For its recent weekly guest playlists, Local Spins has focused on West Michigan concert venues which have been silenced by COVID, with representatives of these rooms compiling lists of songs by their favorite performers. Today, Local Spins publisher John Sinkevics presents his Top 15: Tracks from acts who’ve delivered the best shows he’s seen over the years at 15 indoor West Michigan venues closed since March.

The stages are dark, the halls are quiet.

For more than six months, Michigan concert venues have taken an unplanned, devastating hiatus from live music and there’s still no light at the end of the tunnel.

And on the first day of autumn — when most of these arenas, theaters and nightclubs are usually gearing up for a hectic indoor concert season — more than 70 Michigan-based members of the National Independent Venue Association instead are taking their plea for help to the state of Michigan.

In its #SaveMIStages campaign, the group is seeking $10 million in state funding for music venues “to help with overhead costs and ensure that these community spaces aren’t lost forever,” according to Nate Dorough, talent buyer for Audiotree Presents.

Just like NIVA’s national drive for legislation to assist its members, this week’s kickoff of a statewide campaign targets Michigan legislators, asking concertgoers and music fans to write letters of support for the funding proposal. Visit https://www.savemistages.com/ to send an email to local elected officials. 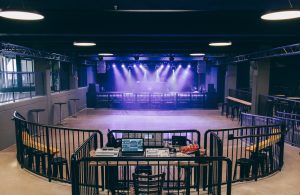 Shuttered, Empty Venues: Elevation inside The Intersection is among many. (Photo/Kendra Petersen-Kamp)

In a prepared statement, Scott Hammontree, talent buyer and partner in The Intersection, noted these businesess “have zero revenue, enormous overhead and no visibility into when we can fully reopen. … Venues have a huge impact in their communities as employers and economic engines. Here in Michigan, our NIVA members have a $667M annual impact on the state’s economy.”

For years, I’ve seen the impact these venues have had across the region, not only creating jobs and economic opportunities, but spawning a vibrant artistic environment that uplifts communities and makes them magnets for other musicians, artists and their fans.

So, today’s special Tuesday playlist spotlights 15 indoor West Michigan venues, reflecting artists who’ve unleashed my favorite concerts at each of these live music spaces. It wasn’t an easy task because I’ve seen so many inspiring shows at these venues over the past 20 years — and I’ve likely forgotten as many as I remember. I should also point out that many of the best shows I’ve seen feature local and regional acts.

In all, it’s a wide-ranging list, and I’m hopeful that I’ll soon be able to add to it with even more memorable performances.

Until then, support your local music venues. They need you now and, without them, we’re a cultural desert.

1. VAN ANDEL ARENA – Elton John, “Rocket Man” – Friends won’t be surprised by this choice, considering my admiration of the piano-pounding Reginald Kenneth Dwight dates back to my teen years. But I’ve also seen dozens of incredible concerts at Van Andel Arena, from Fleetwood Mac to Foo Fighters to Tom Petty to Roger Waters, so this wasn’t a slam-dunk. But Elton John stands out, in part, because I had second-row seats for one of the half-dozen EJ shows I’ve witnessed at the arena and spent time chatting backstage with ever-gracious guitarist/music director Davey Johnstone. And while I’ve seen Elton more than 20 times over the years, he’s always unfurled a different version of “Rocket Man” at each show. (Other top faves: live versions of “All the Girls Love Alice,” “Talking Old Soldiers,” “Funeral for a Friend.”)

2. THE INTERSECTION – Greensky Bluegrass, “Windshield” – Once again, so many memorable performances at this Grand Rapids nightclub, not just in the main showroom but at The Stache and newer Elevation, with national stars galore. But I must say, nothing has matched the feel-good vibe of Michigan’s own progressive/psychedelic bluegrass band Greensky Bluegrass’ numerous appearances on the Intersection stage — especially in 2016 when Billy Strings joined in the fun.


3. FOUNDERS BREWING – Meat Puppets, “Lake of Fire” – Actually, this is a tie with indie-rock’s Built to Spill, which unleashed an incredible, jaw-dropping show at the Founders Taproom in 2015. But Arizona’s cowpunky Meat Puppets teamed up with the legendary Mike Watt (Minutemen, Firehose) in 2017 to create an eclectic and loud night of “twangy, sonic madness full of insanely hypnotic, groovy guitar solos.”

4. 20 MONROE LIVE – Jack White, “Over and Over and Over” – Jack White’s much-buzzed-about 20 Monroe Live debut in April 2018 was everything one would expect from the Michigan hero and as unconventional as anything most fans had ever seen. No cellphones, oodles of spontaneity and often-electrifying music in one of the smallest venues that he and his band played on that tour. (The Pixies’ 2017 show at 20 Monroe Live comes in at No. 2 for me.)

6. THE PYRAMID SCHEME – Heaters, “Centennial” – There’s something brilliantly mesmerizing and communally hypnotic about Heaters’ wall of psychedelic sound, something that’s filled The Pyramid Scheme many times over the years. It’s perfectly suited to this intimate venue, especially when it’s filled to capacity with fans of the Grand Rapids rock band.

7. TIP TOP DELUXE BAR & GRILL – Low Cut Connie, “Shake It Little Tina” – There’s good reason why many have dubbed Low Cut Connie the best live band on the road. Witnessing hyper-energetic Philadelphia pianist-singer Adam Weiner and band in their first-ever appearance at this West Side club in 2015 was a revelation — one of the best nights of rock ‘n’ roll I’ve ever seen, like watching Jerry Lee Lewis or Screamin’ Jay Hawkins in their prime in a sweaty bar. I’ve seen ’em three times since and they never disappoint, but I’ll never forget the wild and completely captivating Tip Top debut.

8. KALAMAZOO STATE THEATRE – Wilco, “Random Name Generator” – In a venue as beautiful, historic and unique as this, it’s hard to imagine ANY show not living up to expectations. But the prodigious Wilco, led by Jeff Tweedy, was beyond impressive when I caught them at State Theatre on their “Star Wars” tour back in 2015. It left me feeling that this uber-talented band can play — and do — anything.

9. ST. CECILIA MUSIC CENTER – Rhiannon Giddens, “Waterboy” – I could probably use the same opening line that I used for State Theatre (above) to describe St. Cecilia’s Royce Auditorium. But Rhiannon Giddens makes you forget where you are no matter where she performs. I said it back in 2015 when she made her debut there and I’ll say it again: The most riveting folk performance I’ve ever seen at this historic place.

10. BELL’S BREWERY ECCENTRIC CAFE – The Accidentals, “Earthbound” – So many lively and inspiring performers have graced this Kalamazoo stage over the years, but Traverse City indie-folk band The Accidentals have become real favorites there because they never fail to emanate passion, happiness and uplifting messagery — not to mention eye-popping multi-instrumental charm.

11. SEVEN STEPS UP – Glen Phillips (of Toad the Wet Sprocket), “Everything But You” – It’s a singer-songwriter’s dream venue and has been for many years in West Michigan. Spring Lake’s Seven Steps Up boasts exceptional and unique acoustics, which is why it’s hosted return visits by many touring artists, including Toad the Wet Sprocket’s Glen Phillips. I was lucky to catch one of those performances by this talented wordsmith.

12. ONE TRICK PONY – Paul Thorn, “I Don’t Like Half the Folks I Love” – Long treasured as a spot for acoustic music, One Trick devotees lovingly recall the days of Monday night “Hat Trick Concerts” when national touring singer-songwriters would perform in the cozy environs and folks from WYCE-FM would pass the hat for a local charity. Mississippi’s terrifically entertaining Paul Thorn — alternately humorous and with a colorful past — played one of those shows and I’ll never forget it.

13. LISTENING ROOM – The Gasoline Gypsies, “Playing With Fire” — It opened in October and closed in mid-March (due to COVID), but in that short period of time, Grand Rapids’ Listening Room cultivated an audience of many who now consider it their favorite music venue. Listening Room also squeezed in lots of tour stops by national artists, with Ladysmith Black Mambazo’s March appearance ranking as my favorite just as the venue was forced to close. But hands down, the best live show I experienced just happened to be a Local Spins-sponsored “Michigan Mondays” concert: Detroit roots rock band The Gasoline Gypsies playing their first all-acoustic show in December.

14. ROCKFORD BREWING – Billy Strings & Don Julin, “Dust in a Baggie” – Before he became an award-winning national bluegrass hero selling out major venues across the country, guitarist Billy Strings was an Ionia native and Traverse City resident who teamed up with a veteran mandolinist, Don Julin, to wow jaw-dropped audiences in tiny venues from Bellaire to Kalamazoo. I’ll always treasure the nights I had to stand on a table at Rockford Brewing just to get a peek at the sweaty duo regaling fans packed in around the little stage.

15. SPEAKEZ LOUNGE – The Go Rounds, “Make It Sweeter” – It’s been an absolute honor hosting Local Spins Wednesdays at Grand Rapids’ SpeakEZ Lounge the past six years, and my heart literally hurts to have that series silenced by the pandemic the past six months. Over the years, we’ve been fortunate to have packed the house for terrific mid-week performances by Michigan acts — from The Concussions to The Accidentals to Billy Strings to That Beatles Thing — but nothing compares to the Grand Rapids release show for The Go Rounds’ 2015 album, “Don’t Go Not Changin.” SpeakEZ’s “dance floor” was jammed with happy, gyrating fans all night and the mood was beyond celebratory, propelled by a Michigan band with a truly distinctive approach.


THE TUESDAY PLAYLIST ON SPOTIFY