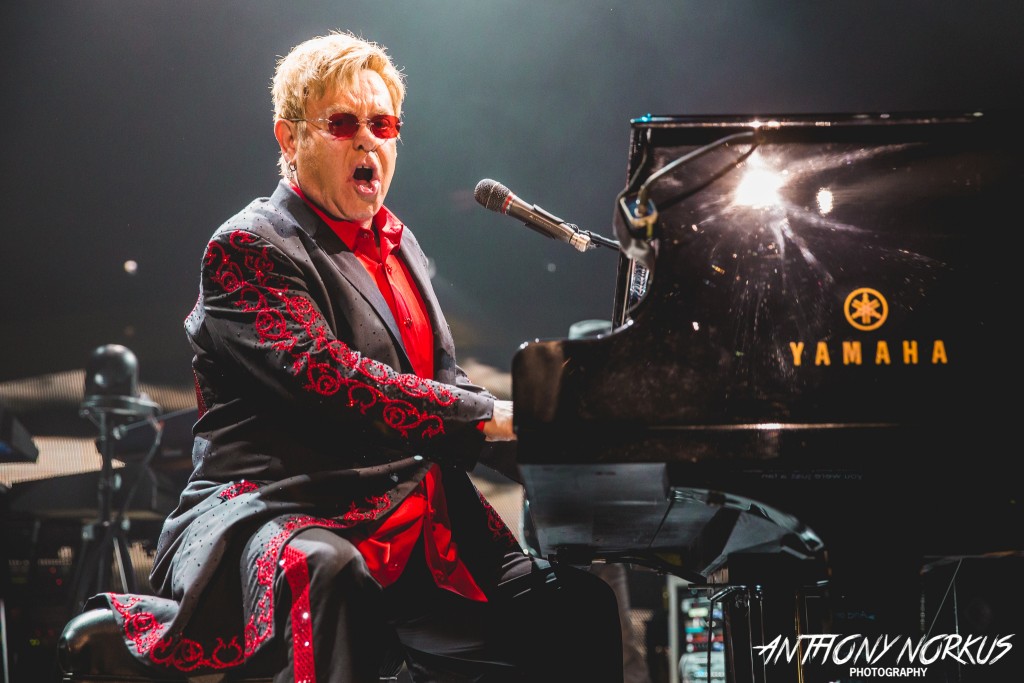 And like many of his contemporaries boasting a ’70s heyday – The Rolling Stones, Aerosmith, Eric Clapton, Robert Plant, Billy Joel – the piano-pummeling icon has devised a masterful way of maintaining his popularity and tactfully readjusting his approach while managing to rock houses in a playfully rambunctious way. 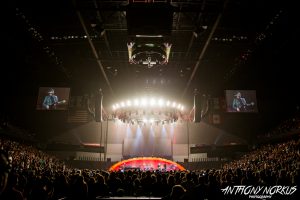 At Van Andel Arena on Wednesday night, Elton also proved he still has the keyboard chops to match any rocker in the business as he unfurled an epic 2-1/2-hour, 24-song show – a concert that covered most of the greatest-hits bases while tossing in new material and a couple of deeper album tracks to boot.

Accompanied by a stage-savvy, polished and snappy five-piece band which includes longtime comrades Nigel Olsson on drums and Davey Johnstone on guitar, the 60-something Elton traded the piano handstands and bench-kicking antics of old for his ageless and impeccable keyboard wizardry, stretching out frequently for extended jams and revamped piano-propelled arrangements of classics such as “Levon,” “Bennie and the Jets,” “The Bitch is Back” and “Burn Down the Mission.” 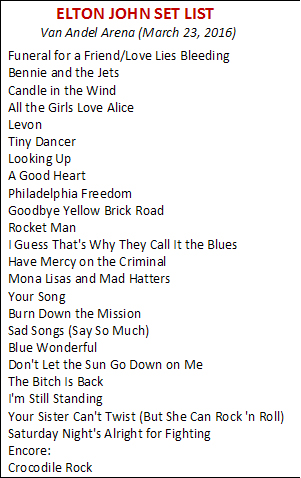 The highlight of the night, in fact, may have been Elton and band’s 13-minute rendition of “Rocket Man,” a truly extraordinary reinterpretation of a rock milestone, featuring an extended neo-classical solo piano intro, spacey video-screen effects and a climactic finish. (Indeed, this reviewer has seen Elton John in concert 16 times over the years and seen 16 different versions of “Rocket Man.”)

All of it went over famously with fans who seemed in an upbeat mood even after waiting in long lines to pass through metal detectors and heightened security on the way into the show. After all, it had been six years since Elton had graced the Van Andel Arena stage and they were ready to embrace the venerable, fist-pumping pianist who is, indeed, “Still Standing.”

Elton – garbed in a glitzy black and red suit – wasn’t shy about trotting out new stuff, either, performing “Looking Up,” “A Good Heart” and “Blue Wonderful” from his latest studio album, “Wonderful Crazy Night.”

The first two appropriately reflected the vibe of the rocker’s glory years. And while the more laid-back “Blue Wonderful” may have been less effective, it gave fans a chance to rest up and hit restrooms before the flourish of the concert’s final six-song blast: “Don’t Let the Sun Go Down On Me,” “The Bitch is Back,” “I’m Still Standing,” “Your Sister Can’t Twist (But She Can Rock ‘n’ Roll),” “Saturday Night’s Alright for Fighting” and the encore, “Crocodile Rock.” 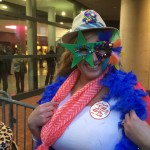 Dressing the Part: This fan from Midland did just that.

Of course, Elton also has reimagined the melody of some classics to suit a voice that doesn’t have the range that it once did. But that occasionally raspy voice also is more resonant, bluesy and every bit as passionate, with percussionist John Mahon, bassist Matt Bissonette, Olsson and Johnstone uncorking some striking harmonies to aid the cause.

That voice and the guitar prowess of Johnstone (the band’s music director, who has long been an under-rated six-string doyen) turned one of the night’s deep tracks, “Have Mercy on the Criminal” from 1973’s “Don’t Shoot Me I’m Only the Piano Player,” into a blues-hued gem with a dark rock wallop. 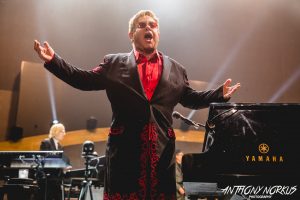 It showed that while Elton aims to please fans with a retrospective of his biggest hits, he’s also willing to energize his band and his audiences with extended solos and less familiar material that smolders in a live setting.

Then again, there’s nothing quite like the nostalgia of crisply performed classics to inspire the usual sing-alongs, swaying and lighter-and-cellphone waving from a sold-out crowd of 12,000 mostly baby boomers.

That certainly was the case during “Don’t Let the Sun Go Down on Me,” “Tiny Dancer” and, of course, “Your Song,” which prompted Elton to declare fittingly, “That’s YOUR song, Grand Rapids.”

Uh, that song and 23 others on this particular “wonderful crazy night.” 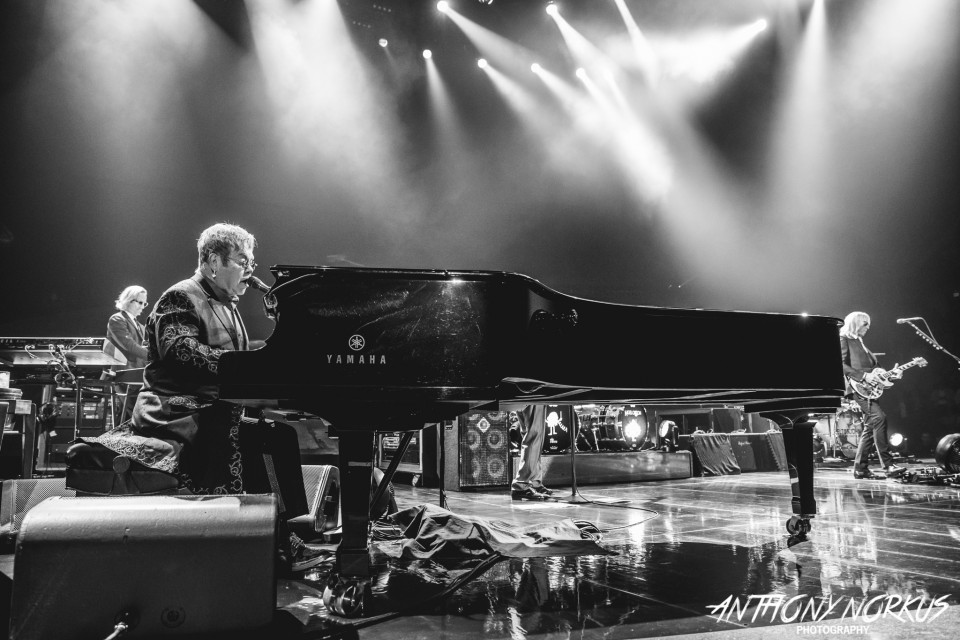 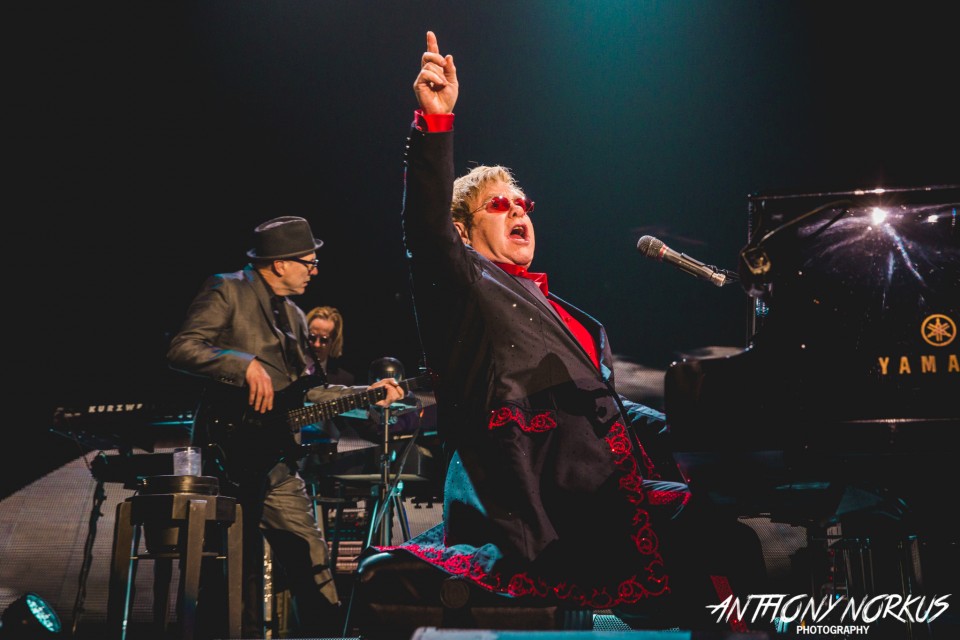 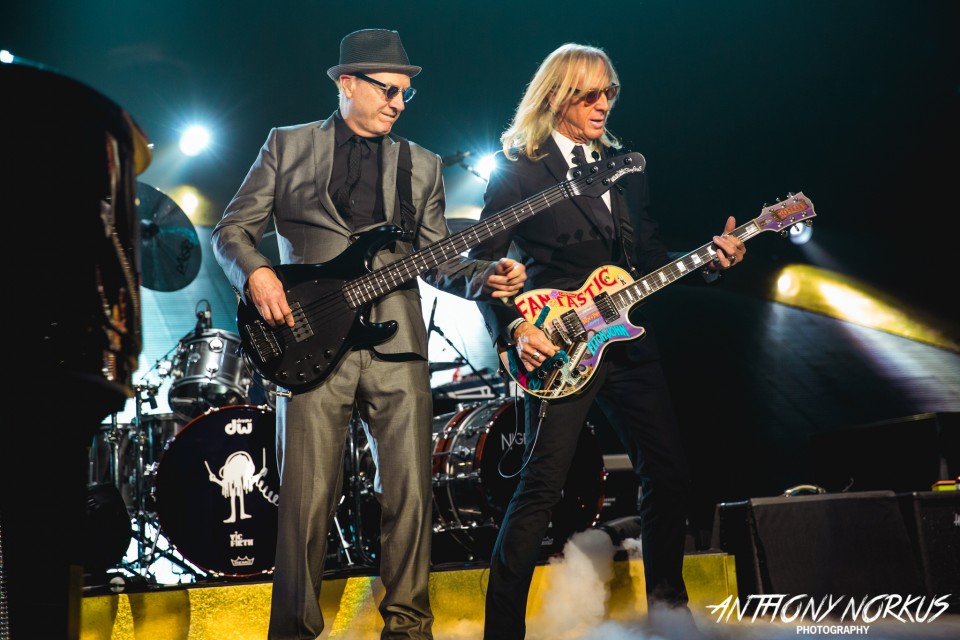 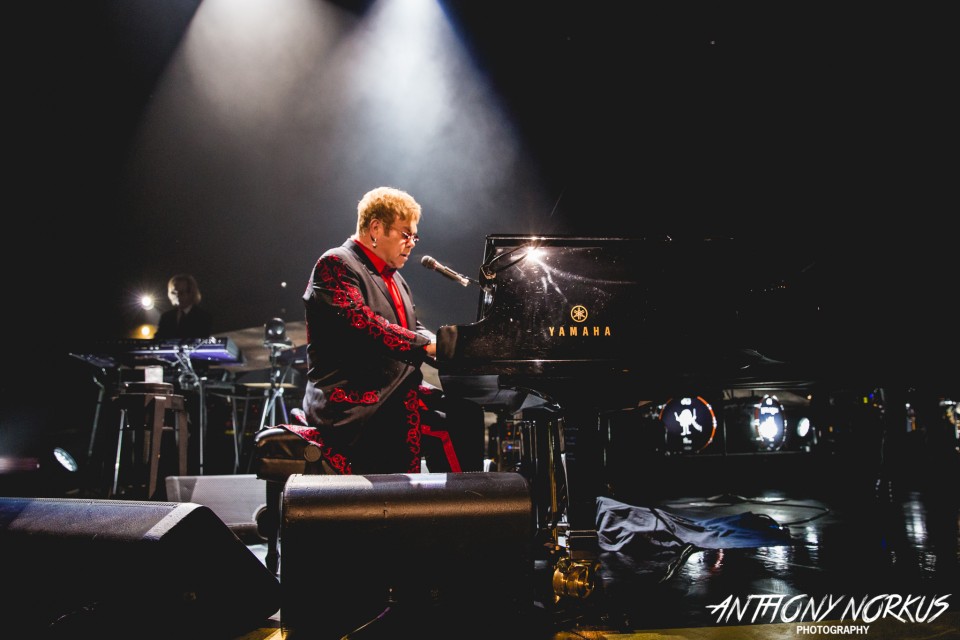 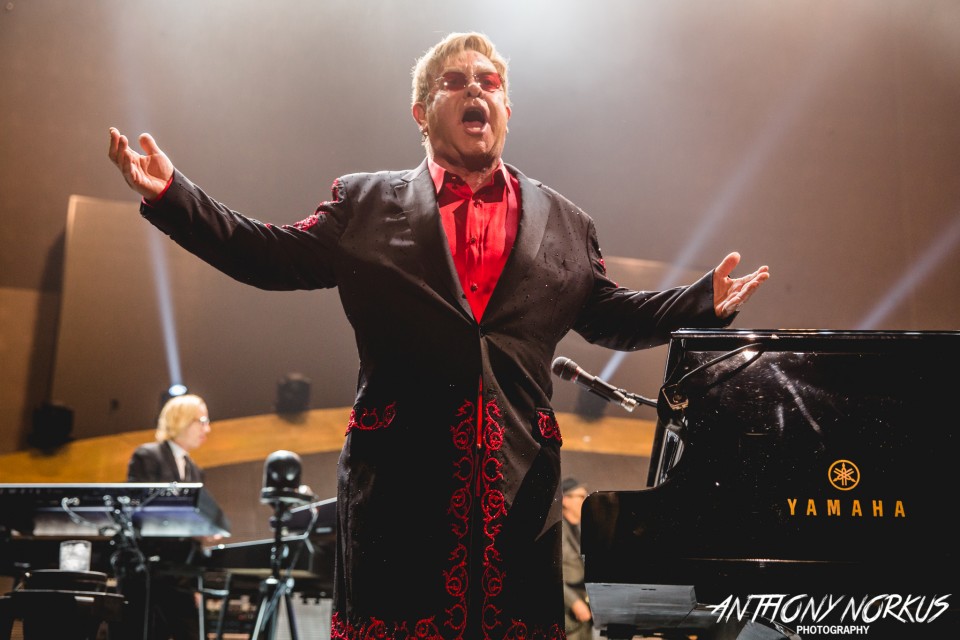 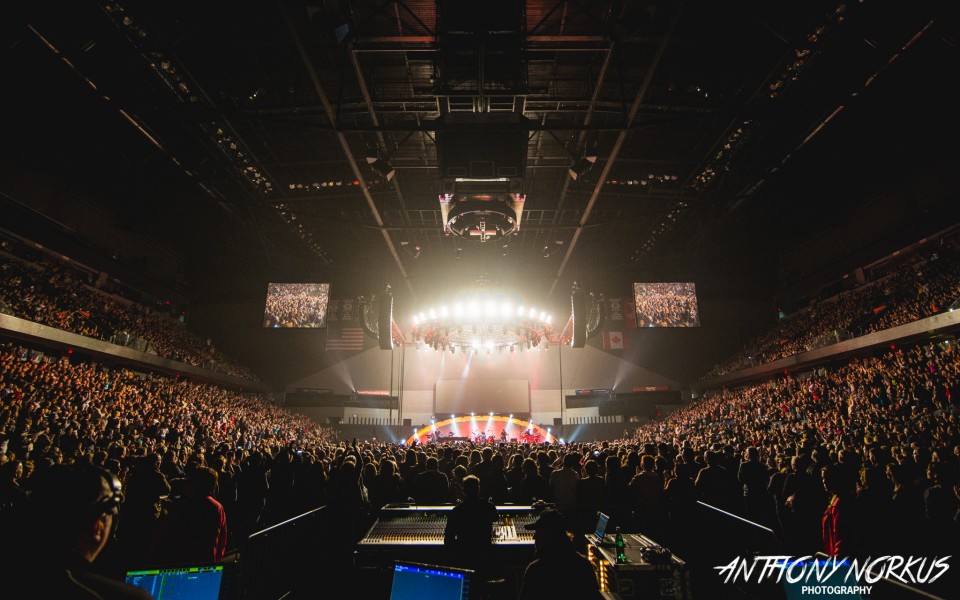 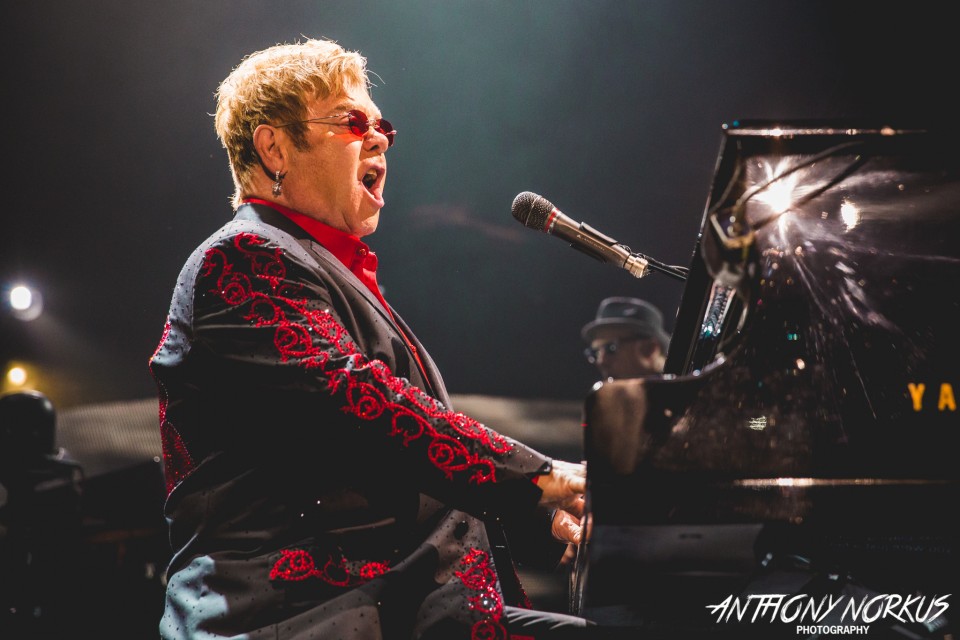 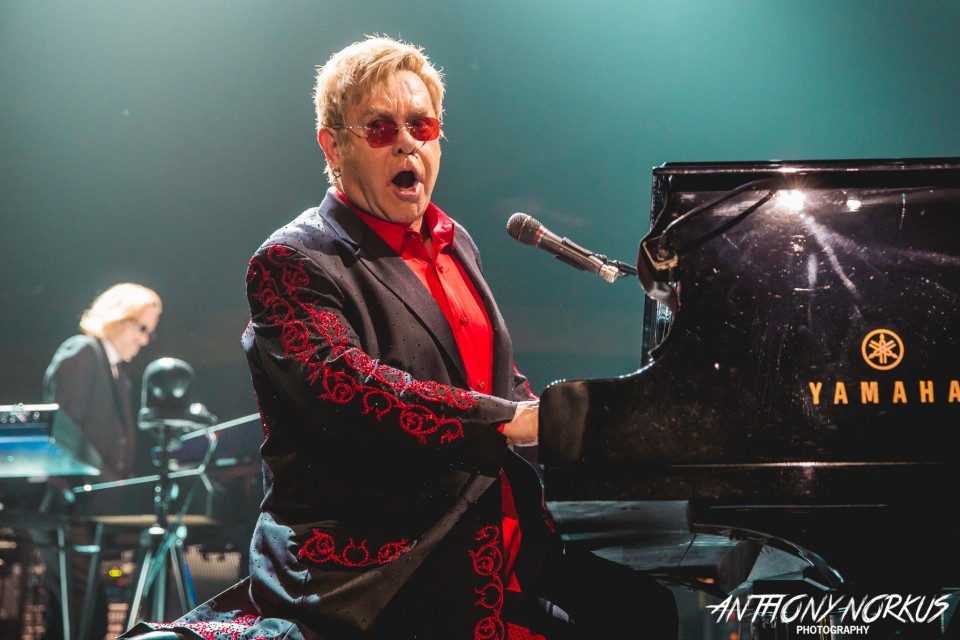 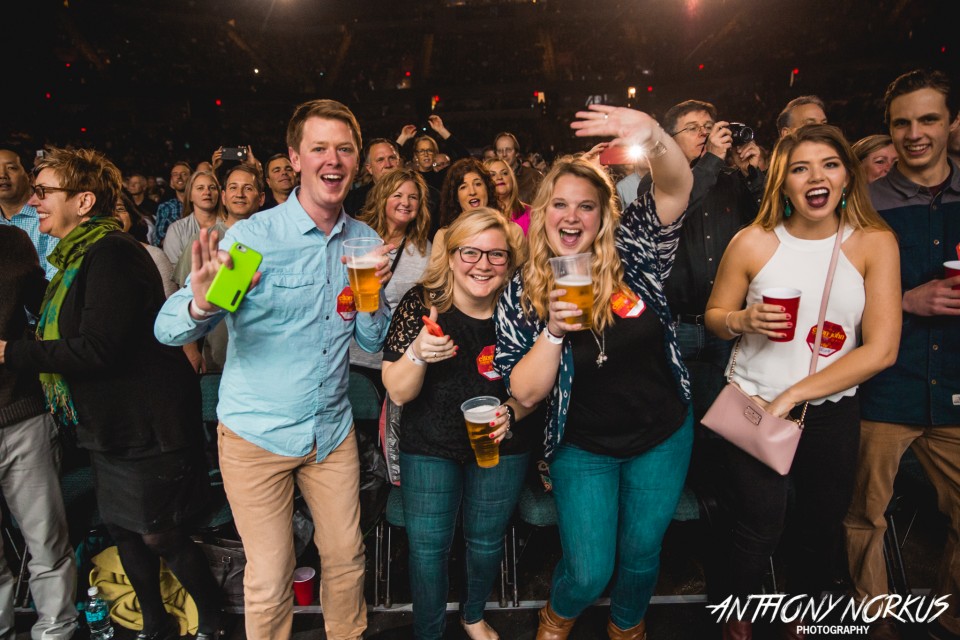 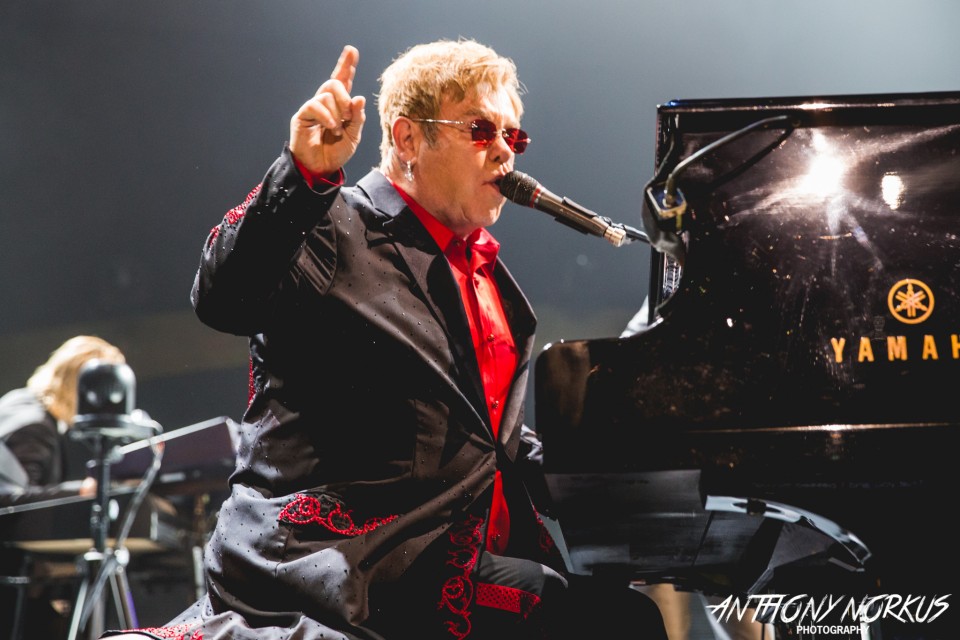 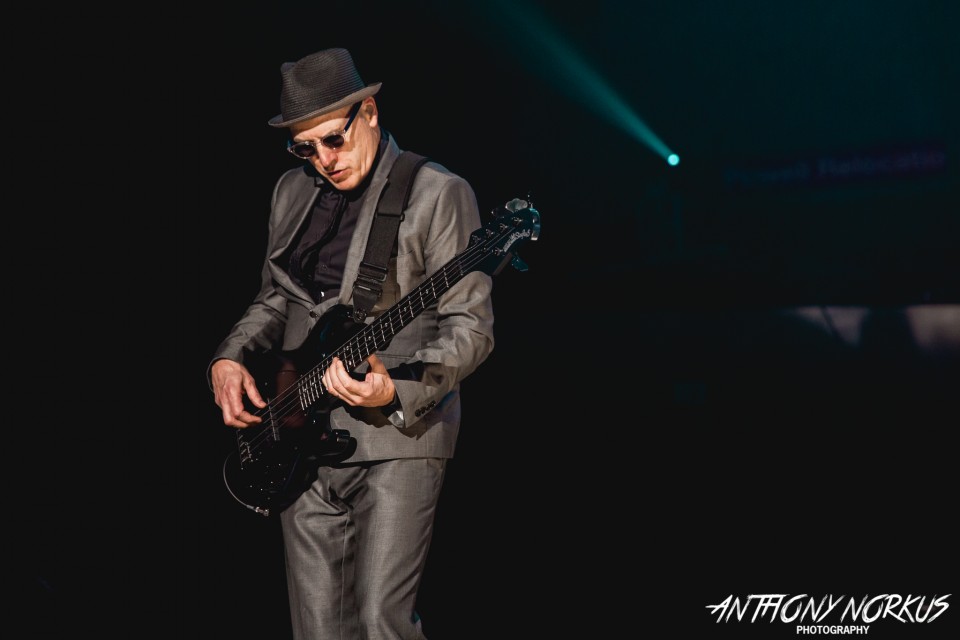 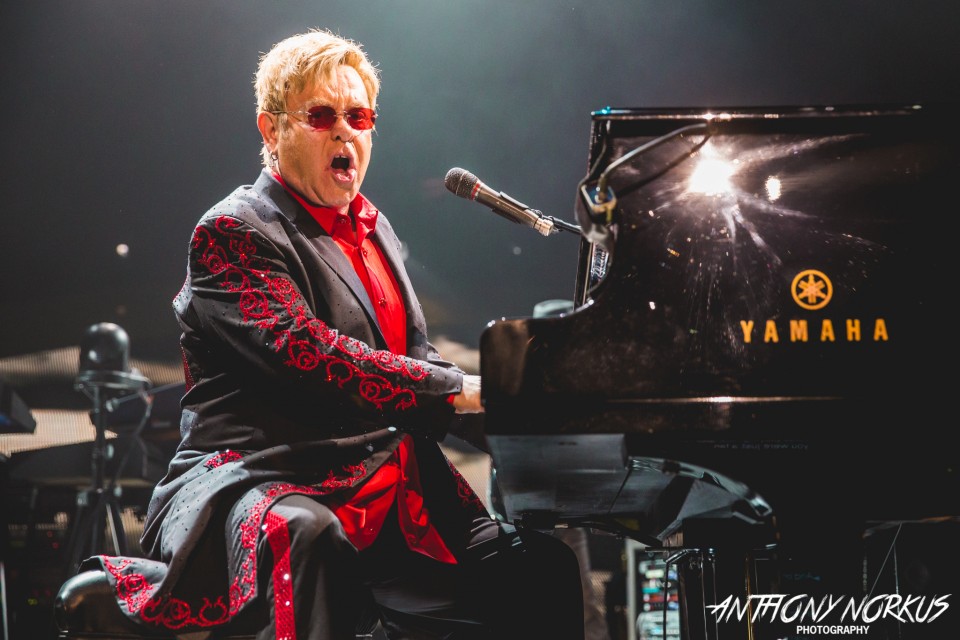 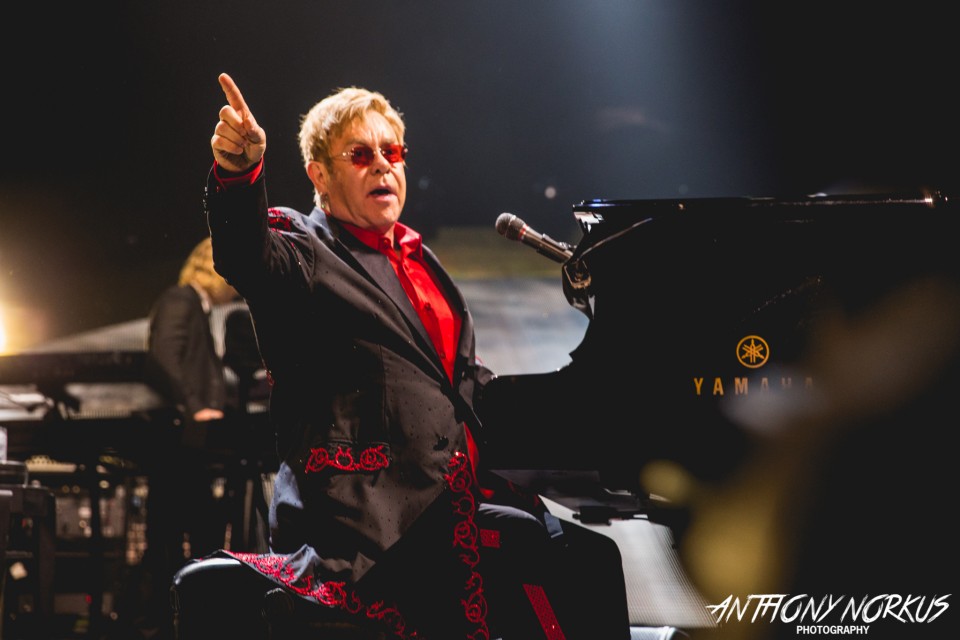 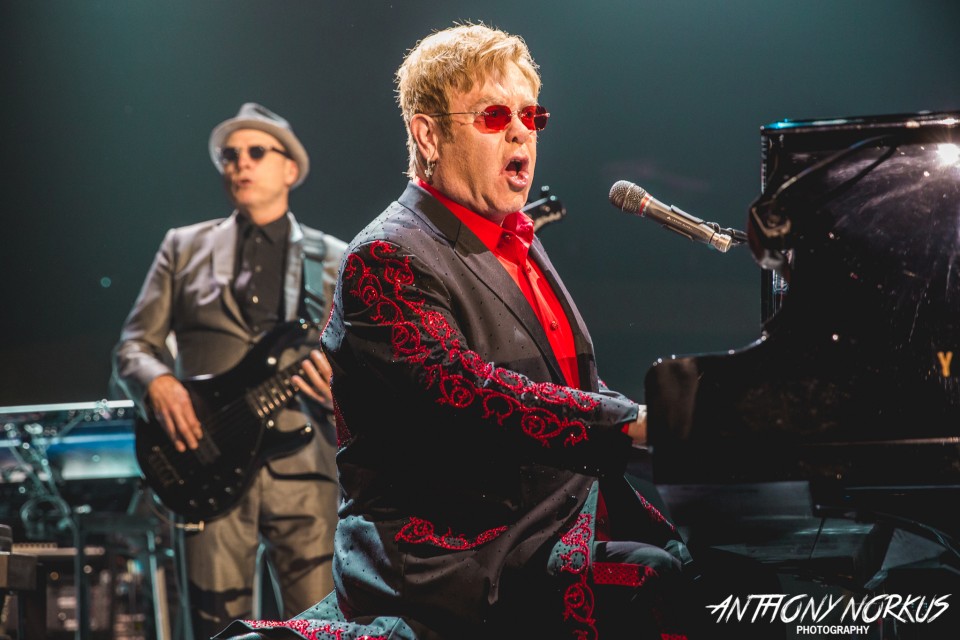 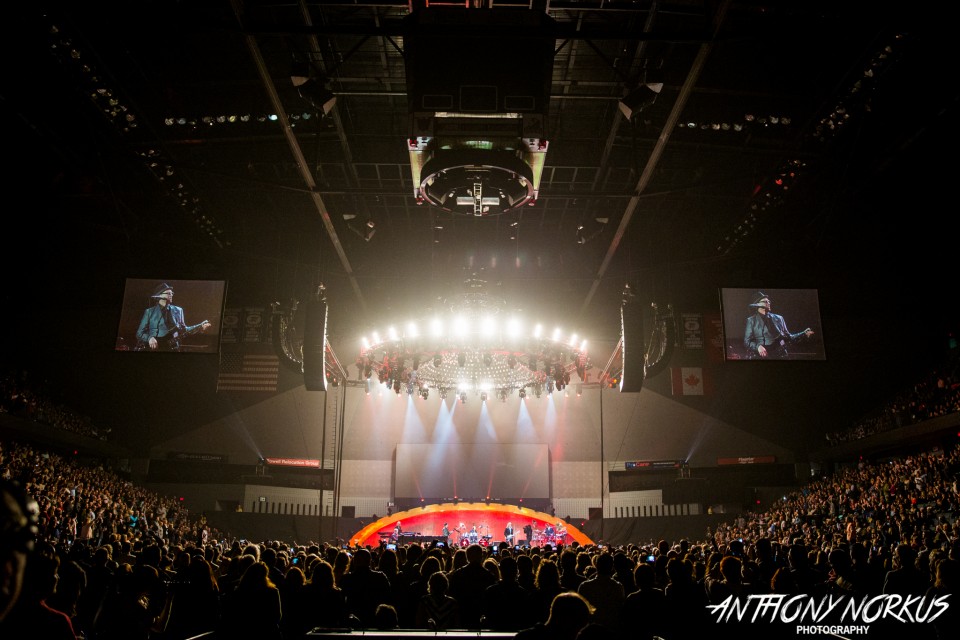 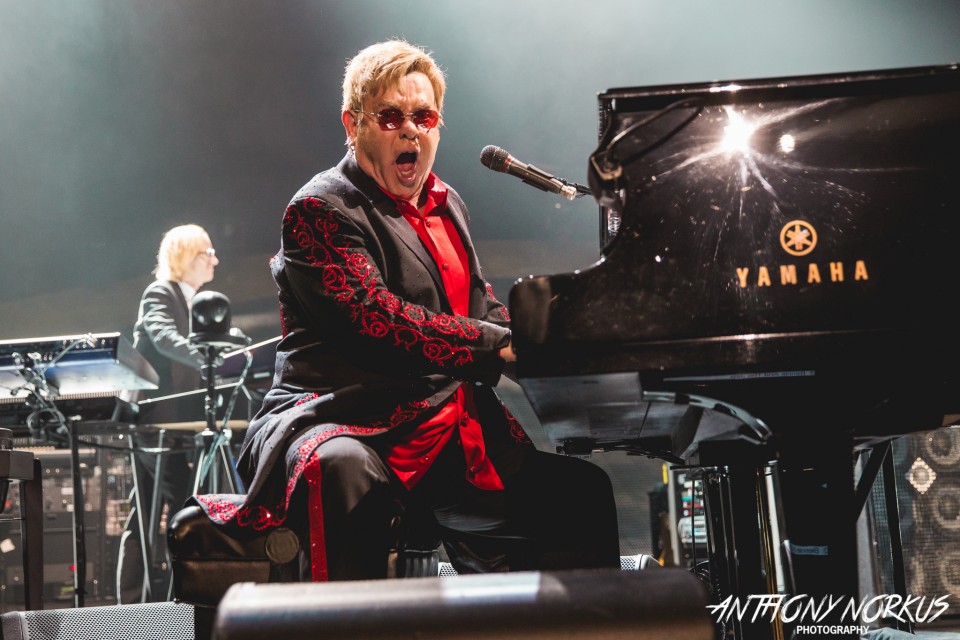 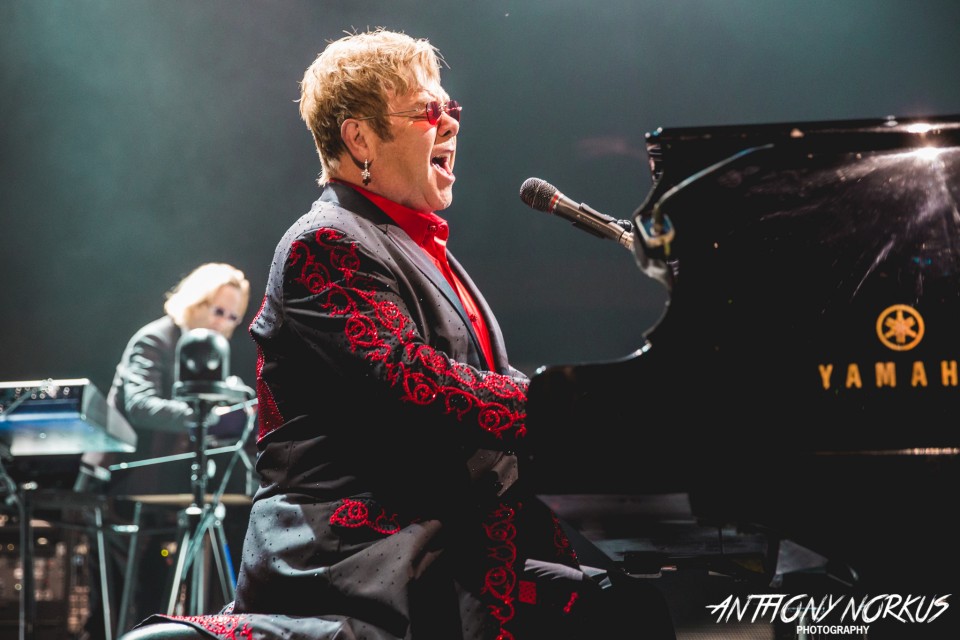