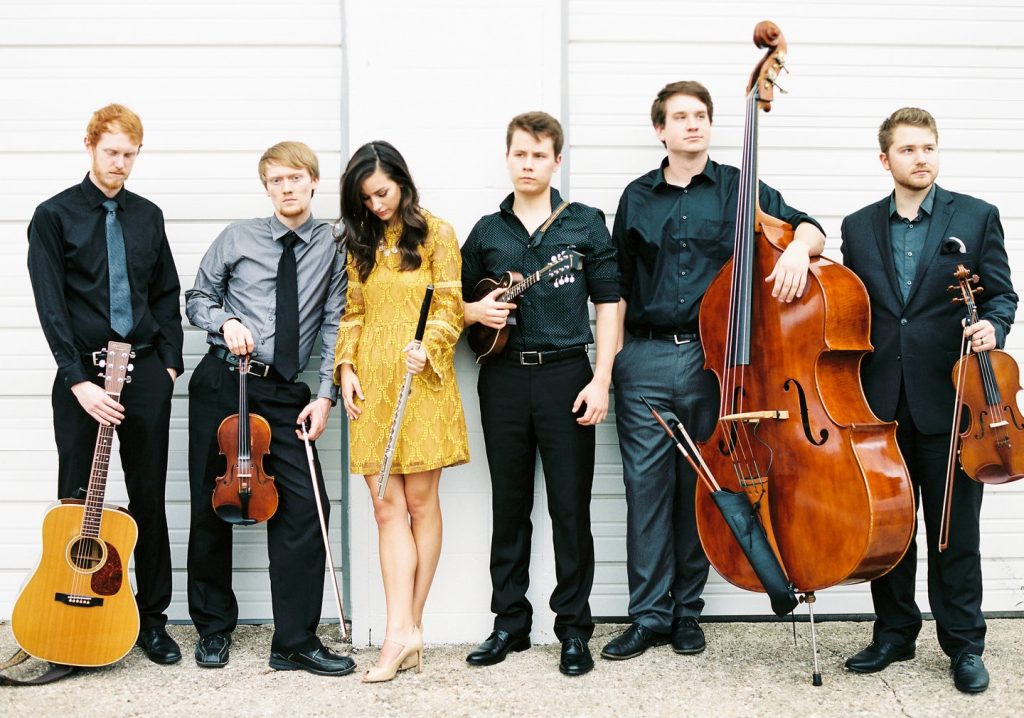 At a ‘Nice Little Intersection of Irish Culture’: The Founding gains inspiration from traditional Celtic music and bands like The Punch Brothers. (Photo/Ashley Slater Photography)

THE ARTIST: The Founding
THE MUSIC: Progressive Celtic folk
WHERE YOU CAN SEE THEM: 9 p.m. Thursday (Nov. 16) at The Wealthy Theatre, 1130 Wealthy St. SE, Grand Rapids (album-release show with Peat in the Creel opening); Saturday (Nov. 18) at the 16th Annual Fiddle Festival at Mona Shores High School in Norton Shores; and Nov. 25 at the State Theatre in Bay City (Christmas-themed show)

It’s been a quick ride to notoriety for Kalamazoo’s The Founding, formerly known as Blarney Castle. 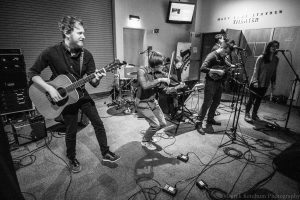 The progressive Celtic sextet has been expeditiously carving out a name for itself since forming in early 2015 and has already played its way up bills at top-tier Irish music festivals around the region.

And while that name has recently changed — more on that below — the lineup has remained the same.

“We feel very fortunate to be at a nice little intersection of Irish culture here in the Kalamazoo area,” said Joel Myers, the band’s composer, mandolin player and one of two fiddlers. “We’re not that far from Chicago or Detroit, two of the main traditional Irish music hubs in America, and there’s a lot of really strong bands and influences coming out of this area.”

At festivals such as the Michigan Irish Music Festival in Muskegon, where they played this September, the sextet members have had the luxury of sharing stages with top bands from Ireland and Scotland, including Old Blind Dogs and Lunasa, along with acclaimed regional acts. The Founding, however, has been busy discovering a sound unique unto themselves.

“All the tunes on the album have that traditional element in there, some more than others, but we are taking this traditional genre and adding to it, creating a more original sound,” said Myers, who pointed to the utilization of three-part harmonies, while factoring in elements of bluegrass and establishing a somewhat different rhythmic style. 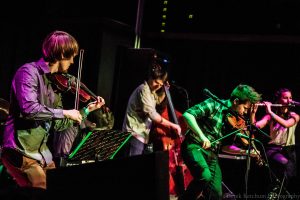 On Stage: The Founding at Bell’s Brewery prior to the name change. (Photo/Derek Ketchum)

It’s done in the vein of one of Myers’ biggest influences, The Punch Brothers, who as he puts it “have taken this traditional art form and expanded upon it … while not taking away from those traditional elements, but instead adding more to them.”

That approach to their sound, “sort of the founding of a new style or sound,” as Myers put it, helped inspire the band’s name change. Actually, the band was never super sold on the original name, which had been chosen hurriedly before the group’s first gig following a Google search of Irish castles.

“We’d always been slightly dissatisfied with the name. But we were doing a lot more purely traditional stuff at first and Blarney Castle is about as Irish as it gets, so it sort of fit who we were then,” said Lukas Stanley, the band’s keyboard player and percussionist.

“Now that we are two-and-a-half years into the project, we sort of realized the need for a name that represents more of what our music is now. And with the new album coming out, it was as good of a time as any to sort of revamp and rebrand the whole thing.”

MOSTLY CELTIC BY NATURE AND NURTURE

All but one of The Founding’s members have a bit of Irish or Scottish heritage, and while some came to the genre later on, Myers knew from an early age it was what he was called to do.

“Celtic music is the genre I grew up playing. It was the genre that got me interested in playing music at all,” he said. “When I was really young, probably in kindergarten, I saw this group play, called the Chelsea House Orchestra, and I said to my mom, ‘I want to do that someday.’ So when I got into high school, I joined a group and started playing these Irish sessions here and there. 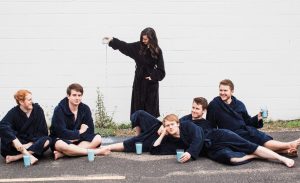 Pouring Out Their New Sound: The Founding (Photo/Ashley Slater Photography)

“When I came to college, Lukas and I had the opportunity to hear my old group live, and Lukas turned to me and said I think we should do that. And I said, ‘That’s what I’ve been saying.’ And it just went from there.”

Stanley, one of multiple Founding members who is not playing his original instrument in the band, had a background playing Celtic fiddle and had composed some as well in high school. Like Myers, he had been drawn to the music for some time.

“I have a little Irish and Scottish in my heritage so I have always had some of that folk music around me,” Stanley said. “There’s something kind of intangible that I think draws people to the Irish culture and tradition and I don’t know if that comes out of the American history and how that is influenced by the Irish immigrants in the last century, but I’ve always just felt drawn to the culture and the music.” 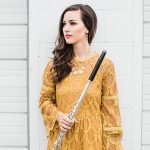 The lone member without Gaelic ancestry is vocalist and flutist Elizabeth June (EJ). Because her voice draws many people into the band’s music, it’s easy to see how The Founding sets itself apart from other Celtic groups.

“While her voice fits really well in this genre, she doesn’t have an Irish accent or anything that limits us to really traditional Irish songs, like some bands might stick to. So I think she brings a lot to the band in that way,” Stanley said.

In addition to Myers, June and Stanley, The Founding features bassist Kyle Pitcher, fiddler John Robey and Patrick Hartson on guitar and cello.

Winners of the 2017 Kalamazoo Fretboard Festival play-in competition in the acoustic category, the band once known as Blarney Castle officially releases the new album Friday. It can be pre-ordered online here or purchased a day early at Thursday’s album-release show at Wealthy Theatre.

VIDEO: The Founding, “Her Heart Was Buried”

VIDEO: The Founding, “Silhouettes Against the Soil”