Savannah Buist and Katie Larson have generated a buzz with their catchy folk-rock, caught the ear of Marshall Crenshaw and built a solid fan base. Their One Trick Pony show marks their Grand Rapids debut. 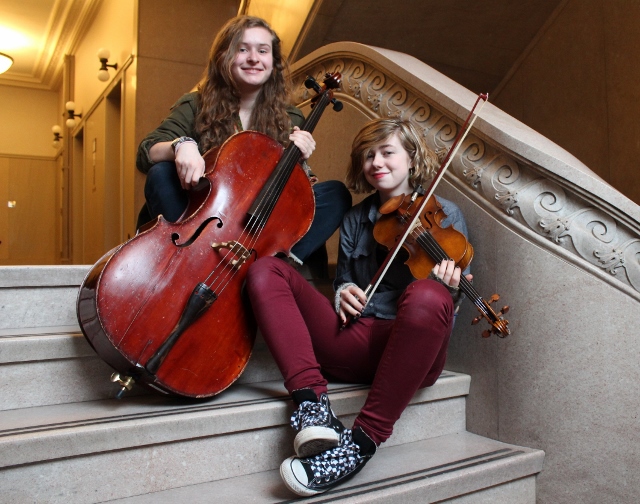 Since the fall of 2011, the teenagers in this buzzed-about Traverse City string duo – Savannah Buist and Katie Larson – have released two studio albums and made guest appearances on nine others, played more than 500 live shows, landed song placements in commercials and films, and were named 2013’s “Red Hot Best” of northern Michigan music by Traverse Magazine. 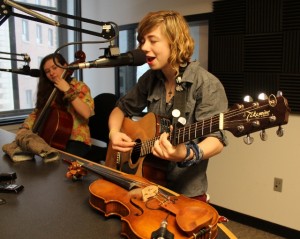 Although Buist is primarily a violinist and Larson a cellist, both play a host of instruments – including guitar, banjo, piano, accordion and bass – in delivering their catchy indie folk-rock, acoustic pop and gypsy jazz, and both recently were accepted into Boston’s esteemed Berklee College of Music.

The young singers and multi-instrumentalists even have caught the attention of renowned singer-songwriter and radio host Marshall Crenshaw, who invited them to New York in February to record a three-song EP with producer Stewart Lerman that Crenshaw plans to shop to record labels.

“We’re going to see where that goes. We want to make sure that we’re doing what’s best for us and that we’re with people whose best intentions are to help us,” Buist says with a wisdom beyond her 18 years. “We’re really going with the flow right now.”

‘A REALLY GOOD TEAM’ AND A BUSY TOURING SCHEDULE

That flow exudes professionalism and surprising musical maturity, but also youthful exuberance and refreshing innocence: They schedule tours around their school schedules, and Buist’s mom, Amber, still drives them to shows, traveling with the duo full-time as they crisscross Michigan and the Midwest.

Buist jokingly refers to her mom as “the roadie,” with whom she works on band booking and promotion every week.

“We’re a really good team at this point,” she says. “I feel like there’s no real security other than somebody who truly loves you from the bottom of their heart and is willing to help you in any way they can because of that.”

It’s been a meteoric rise for the team, ever since the self-proclaimed orchestra “dorks” met as students in orchestra class at Traverse City West Senior High School in 2011 and instantly hit it off. Together, they explored Irish music, jazz and even worked up a version of Django Reinhardt and Stephane Grappelli’s “Minor Swing” on cello and violin. Both ended up being recruited to the singer-songwriter program at Interlochen Arts Academy.

In 2012, the duo released its first self-produced album, “Tangled Red and Blue,” and followed that with 2013’s “Bittersweet,” recorded partly in Nashville – an album that was even praised by UK Magazine’s Leicester Bangs, who compared it to the music of Joanna Newsom “in full poetic flight.”

SHARING STAGES AND GROWING UP IN THE TRAVERSE CITY MUSIC COMMUNITY

Along the way, the duo has toured and recorded with Interlochen Arts Academy musicians Elaina Burress and Taylor Fernandez as part of the band Academy 4, and has shared stages with the likes of Andrew Bird, Rosco Bandana and Sixto Rodriguez (aka “Sugar Man”).

On Wednesday, the teens traveled to Grand Rapids to appear on Local Spins Live on News Talk 1340 AM (WJRW), showing off their versatility by trading vocals and switching instruments for the two songs they played on the air: Buist played acoustic guitar on “The Silence” with Larson on cello, then handed the guitar to Larson for “The End,” while she alternately plucked and sawed away on her violin.

Listen to the show podcast here, with videos of their performances below. They make their Grand Rapids concert debut at 8 tonight (Thursday) at One Trick Pony, 136 E. Fulton St. Admission is free.

The duo’s rapid emergence “really has a lot to do with the scene in Traverse City,” Larson insists. “It’s really been blowing up with artists who’ve kind of taken us under their wing. They’ll be like, ‘Hey, do you guys want to play cello or violin on our album or come out to a gig?’ We really have grown up in that community.” 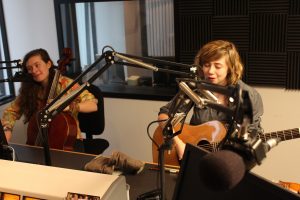 Multi-instrumentalists Larson and Buist on the air (Photo/Anna Sink)

Buist cites artists such as Billy Strings and Don Julin, Nicholas James & The Bandwagon, and Blake Elliott & E Minor among many who’ve supported and nurtured The Accidentals.

And of course, both musicians grew up in ultra-musical families, with mothers (Amber Buist and Mary Larson) who sing and fathers (Rick Buist and Steve Larson) who play piano professionally.

“It had a huge influence,” says Larson. “My family always listened to music growing up and that’s probably the reason why we’re open to so many different styles. (It included) pop and Broadway musicals and classical music that I can now incorporate into my own songwriting and my own musical interests.”

A FAST-GROWING, ‘MIND-BLOWING’ FAN BASE

As Buist puts it, their parents are their heroes who helped them develop a passion for creating music and testing new genres.

“Sometimes we rock it out, too,” she says. “We really have a lot of rock songs in our set. We like to be able to have a lot of versatility with our music and try to expand our knowledge of each genre and share it with others.” 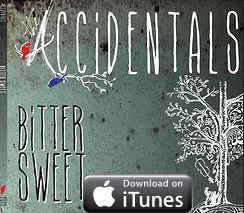 Buist, 18, who’s now enrolled in the audio technology program at Northwestern Michigan College, and Larson, who turns 18 on Friday and graduates from Interlochen in May, both were accepted into the Berklee College of Music, but are taking “a gap year” or two off before enrolling at the school to pursue opportunities with The Accidentals.

It’s easy to see why: The band has gone from 40 “likes” on its Facebook page after releasing its first album to nearly 4,900 today.

And this young group – which is taking a short spring break tour over the next week to play venues in Indiana and Tennessee – already plans to play the prestigious Wheatland and Blissfest festivals this summer, along with more extensive Midwest touring.

“It’s blowing our minds. We’re really excited,” says Buist. “We don’t know where we’re going, but we like to think that if we surround ourselves with people who truly care about us, and with the kind of fan base that we have where it’s more like a family than anything else, we’ll be OK. We really just want to keep playing music until we stop.”

Learn more about the duo at its official website, moreaccidentals.com, and follow them on their Facebook page. You can also catch them on WYCE-FM (88.1) at 4 p.m. today.