The all-star trio of singers — May Erlewine, Lindsay Lou and Rachael Davis — launch a four-show Mitten run at Bell’s in Kalamazoo on Wednesday, and are eyeing a really big year in 2020. 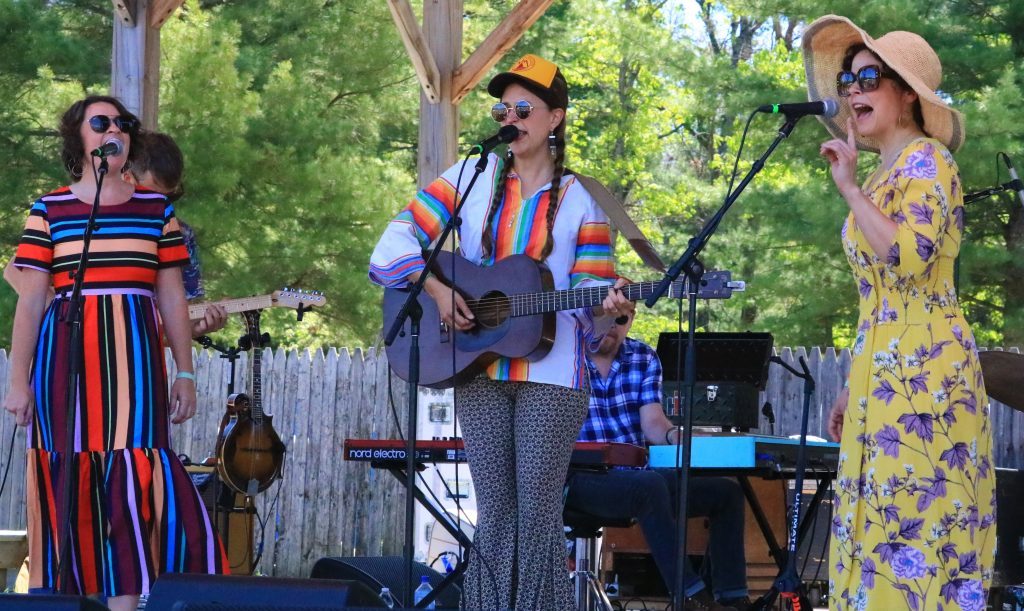 ‘Carving Out Space’ for More Shows in 2020: The Sweet Water Warblers also plan to record a new album. (Photo/Anna Sink)

THE BAND: The Sweet Water Warblers
THE MUSIC: Harmony-rich, deep-rooted Americana
WHERE YOU CAN SEE THE BAND: 8 p.m. Wednesday (June 19) at Bell’s Eccentric Café in Kalamazoo ($18 advance, $23 day of show); 6 p.m. Thursday (June 20) at Adams Park in Tecumseh (Free show); 8 p.m. Friday (June 21) at The Orpheum Theater in Hancock; 7 p.m. Saturday (June 22) at The Crystal Theatre in Crystal Falls

The Sweet Water Warblers have been turning heads together for nearly five years now.

And while the project has yet to become the top musical priority for any of its members since first performing an impromptu set at the 2014 Hoxeyville Music Festival at the request of festival organizer Kristin Robinson, the trio of Rachael Davis, Lindsay Lou and May Erlewine is ready to embark on what will be their busiest time together yet. 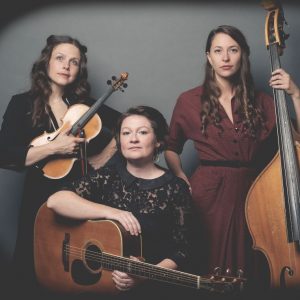 A quick look at the act’s tour calendar shows there’s nothing on it outside of a four-night, four-show run through Michigan that kicks off Wednesday night (June 19) at Bell’s Brewery Eccentric Café in Kalamazoo, but it’s what isn’t on the calendar that should have fans of the harmonious Americana super group most excited.

“2020 is going to be the year of the Sweet Water Warblers,” Lindsay Lou announced during her solo set two weekends ago at Camp Greensky — a set that featured sit-ins from both of her Warbler bandmates on the very stage where it all began a half decade ago.

Indeed, the trio, Lindsay Lou said, has plans to head into the studio this October, likely in Nashville, to record their first full-length album — and then tour extensively behind it next year.

“We all still have our own careers, and lives and families and everything else that’s going on, but we are carving out a space for about 50-75 shows next year,” she told Local Spins following Camp Greensky. “It will be some proper touring, a real push forward for us.”

KEEPING BUSY ON THEIR OWN

Those independent careers have been anything short of busy since the trio of lead vocalists — known for trading off duties on a number of acoustic instruments, including the double bass, guitar, fiddle, banjo and uke — put out their debut EP, “With You,” in 2017 and headed to the United Kingdom for an ensuing mini-tour.

Lindsay Lou and Erlewine have each released successful solo LPs — Erlewine’s “Mother Lion” and Lindsay Lou’s “Southland” — and on top of an EP with her soul band, The Motivations, that came out last winter, Erlewine also has another solo LP, to be called “Second Sight” due out this fall. 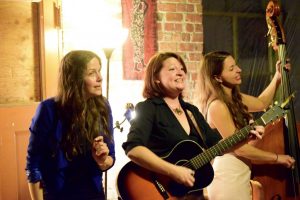 Busy Solo Careers: All are hitting the road this summer. (Photo/Ryan Boldrey)

Erlewine, the only one of the three to still call Michigan home, has a jam-packed schedule this summer — filled to the brim with Michigan shows and festival appearances.

Lindsay Lou, who has put out a pair of singles, “Keep on Going” and “Ready,” over the past two months, has been busy taking the national festival circuit by storm.

The Nashville-based songstress has appeared recently at, among numerous other festivals, Bluegrass in the Bottoms, Camp Greensky and Del Fest. And she has quite a few more stops on the horizon, including some notable ones at Red Wing, Northwest String Summit, Four Corners Folk Festival, Huck Finn Jubilee, and of course, back home at Hoxeyville this August where Erlewine will also perform.

Davis, who also now calls Nashville home, has been busy of late as well, recently performing solo at Otus Supply in Ferndale as well as Camp Greensky. She’s also hit the road with both Joshua Davis and her husband Dominic Davis, the latter of whom she has a duo show with, scheduled for June 29 at The Livery in Benton Harbor.

SOMETHING SPECIAL AS A TRIO

There’s no doubt when the three of them get together, though, it’s something special.

And Lindsay Lou, who called her time spent playing and singing with Davis and Erlewine “a highlight to (her) existence,” couldn’t be more excited for what’s around the bend. 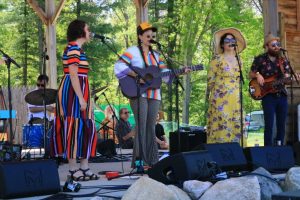 Savoring Their Time Together: Davis and Erlewine joined Lindsay Lou on stage at Camp Greensky earlier this month. (Photo/Anna Sink)

“We’ve been busy writing and having retreats, just creating, practicing songs together and making up songs on the spot,” she said. “We’ve got a lot of voice memo recordings and stuff, but we’ve got the dates set aside to go into the studio in October. It’s all going to start in October.”

Quite a few of the songs are finished, or close to it, Lindsay Lou said, adding that fans can definitely expect to hear some new material at this week’s shows.

Wednesday’s appearance in Kalamazoo is a partially seated show in the Back Room. Seats are available on a first-come, first-served basis. Tickets are $18 in advance and $23 on the day of the show. Doors open at 7 p.m. and Kalamazoo songstress Megan Dooley opens the show at 8 p.m.