Turning heads with their unique, bluesy sound that gives new meaning to ‘power trio,’ West Michigan’s The Strapping Owls launch an eight-state tour behind their new recording in Saugatuck on Friday. 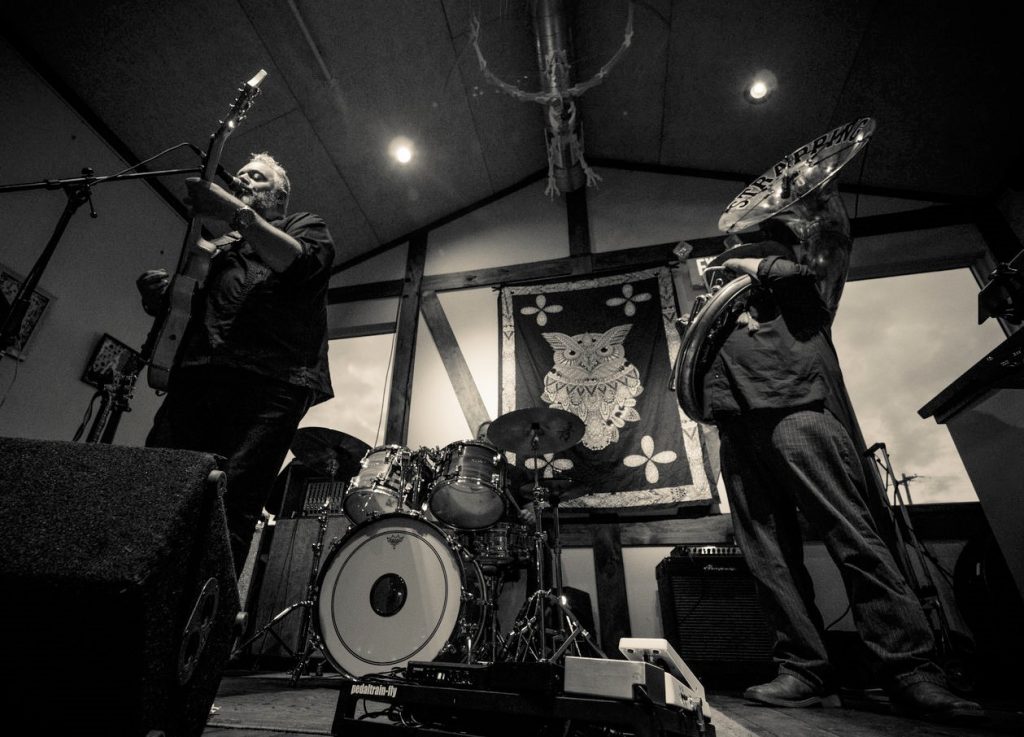 A Signature Live Experience: The Strapping Owls will be taking that on the road this month. (Photo/Kyle Bice)

THE ARTIST: The Strapping Owls
THE MUSIC: Power trio playing funky blues
WHERE YOU CAN SEE THE BAND: 7 p.m. Friday at The Saugatuck Center for the Arts with Dede & The Dreamers

SCROLL DOWN TO LISTEN TO TRACKS FROM ‘LIVE WIRE SOUL’

Who needs a bass when you’ve got a sousaphone?

Already forging their way as a funky blues trio and crafting a sound all their own after but a few months together, The Strapping Owls’ Fred Bueltmann made the call three years ago — with support from bandmates Nicholas Barron (vocals, guitar) and Larry Beers (drums) — to leave his bass on its stand for an entire show.

“I hadn’t played the tuba for 15 years or so, but something about this group sort of encouraged me,” said Bueltmann, a resident of Fennville who had majored on the instrument in college.

“Right away we felt like we had something kind of unique. We were now making in-the-moment musical decisions based on this instrumentation that was a twist on an average band, or the band we had started and gotten used to.”

Bueltmann — who had known longtime Chicago musicians Barron and Beers for years and played bass in a couple bands with Beers (including Uncle Heavy and The Seeing Eye Horns) — corralled the two for an improvisational show at an industry event at New Holland Brewing four years ago.

And the rest as they say, is history.

A minority owner at New Holland for 12 years, and author of a pair of books, “The Beervangelist” and “A Rising Tide: The History of Michigan Craft Beer,” Bueltmann — who had previously served as VP of sales and marketing at Bell’s for more than a decade — had been preparing for a change in his everyday life.

He’s since sold off his shares at New Holland, taken on consulting work focusing on brand identity, team development and mission and vision, and found more time for his own vision: working on another book and diving full bore into the music The Strapping Owls are creating.

After a slow start in Year 1, the trio, fueled by the depth of both Barron’s words and voice, began to pick up steam.

The songs began to pile up, along with the miles that they began to log between four- to five-show micro-tours across the country, and festival appearances at places like Milwaukee’s Summer Fest and Earthwork Harvest Gathering in Lake City.

THE STUDIO OR THE STAGE? IS IT EVEN A QUESTION?

Now, The Strapping Owls were faced with a decision.

What was their first album going to sound like? The answer turned out to be a relatively easy one, according to Bueltmann. 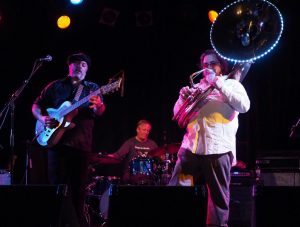 Have Tuba, Will Travel: The band has many sides, from ‘sweet and melodic’ to ‘wild.’ (Photo/Kyle Bice)

“I felt like when we brought this music out into the world, we should be bringing this live experience along with it, because that’s our signature,” he said. “I think that there is a distinct possibility that this could become our MO.”

With a vision in mind, the band tabbed recording engineer Tim Julian to head out on the road for a series of five gigs at breweries across Michigan. Julian tracked roughly 100 songs from those shows, and 11 of them, co-produced by Dominic John Davis (Jack White, Steppin’ In It) and Bueltmann, now make up the band’s debut record, “Live Wire Soul,” to be released Friday.

“They’ve got many sides to them,” Davis said of the band, “a very sweet and melodic side, but also a very wild side that wants to color outside of the lines — musically and lyrically, as well. Nicholas can be very sweet and touching, but doing so while delivering a powerful message that might be difficult to hear.”

The Strapping Owls will celebrate the album release by kicking off a nine-date, eight-state tour Friday night at the Saugatuck Center for the Arts. The show will feature live performance art, a walking art gallery and an opening performance by Dede & The Dreamers. Tickets, $25, can be purchased online here.