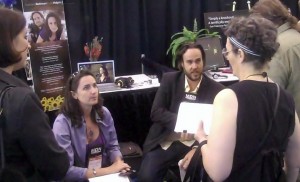 All of them and more are right under our noses – and right in front of us on stage – in West Michigan this week.

For the first time, the Midwest Arts Conference is being held in Grand Rapids, with 950 artists, managers, agents, venue representatives, performing arts presenters and arts administrators attending the booking and educational conference for the Midwest performing arts industry at DeVos Place and Amway Grand Plaza Hotel.

Held last year in Minneapolis (with next year’s conference taking place in Austin, Texas), this is the place where the industry makes contacts, where venues and performing arts organizations seeking acts for upcoming seasons check out offerings, where artists and managers strut their stuff.

By day, it’s professional development seminars and a “marketplace” of some 250 exhibitors representing 4,000 artists. 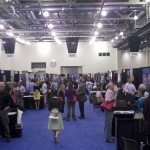 By night, it’s all about performance showcases, with dozens of acts playing short sets in several locations – “spotlight showcases” at DeVos Performance Hall, and “independent showcases” in banquet and meeting rooms at the Amway Grand (and a few off-site venues, such as The B.O.B. and Grand Rapids Ballet).

I checked several out on Wednesday night and the talent level was phenomenal, whether it was Latin beats (Calle Sur) or bluegrass (Rhonda Vincent). You can check out video snippets of some performances below (Susan Ashton, Calle Sur, John Berry, Neil Jacobs, Rhonda Vincent).

“It’s kind of everything,” says Anne Romens, external relations manager for Arts Midwest, which is based in Minneapolis. 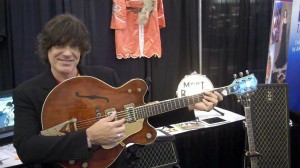 Jim Hondros, aka George Harrison, of Chicago’s Meet the Beetles, which has a booth at this year’s conference.

The bottom line: The marketplace is where contracts get signed. “It’s where a whole lot of bookings happen,” she says.

Or as Arts Midwest executive director David Fraher puts it, referring to the process of getting deals done: “There is a backroom.”

Consequently, many artists and performing groups return annually to the event, which is now in its 25th year.

“It’s a great opportunity to get into a whole new market,” says Stephanie Bettman, part of the Denver-based Americana duo of Bettman and Luke Halpin.

And bookings are part of the package. “Absolutely, or we wouldn’t be doing this,” says Halpin.

Get more details about the Arts Midwest and the conference at its website.

And while you have to be a registered conference attendee to check out the marketplace and spotlight showcases, those who stroll the Amway Grand Plaza Hotel tonight and Friday night can catch a host of independent showcases by impressive performers, including classical musicians, jazz singers, Celtic bands, dance ensembles, guitar duos and country bands.