The highly regarded Spring Lake concert venue which opened 11 years ago has hosted hundreds of concerts by iconic artists. The back story at Local Spins. Star in the Making: Billy Strings and Don Julin played Seven Steps Up in 2015. (Photo/Anna Sink)

A trailblazing West Michigan listening room that brought scores of iconic, national touring acts – as well as regional stars — to Spring Lake for more than a decade will be closing its doors.

Seven Steps Up announced Sunday that the venue will close after its final scheduled show in December, with the renovated historic building that previously served as a Masonic Temple put up for sale.

On the venue’s Facebook page, Michelle and Gary Hanks called it one of the most difficult and “heart-wrenching” decisions they’ve ever made.

“It is with a heavy heart that we announce the closing of Seven Steps Up. Thank you for the support of the many artists and music lovers who have made this opportunity to bring music to West Michigan for the past 11 years a reality and a joy,” they wrote. End of an Era: Gary & Michelle Hanks inside Seven Steps Up. (Photo/Matt Marn)

“We have been so honored and humbled to share the music and experiences.”

Michelle Hanks didn’t immediately respond to Local Spins queries about the reasons for the closure, but Seven Steps Up – along with many concert venues – was severely impacted by the COVID-19 pandemic that wiped out live music and concerts for an extended period of time. She referred Local Spins to the GoFundMe campaign information for the non-profit Courtyard Concerts organization that the Hanks formed to sponsor concerts in Grand Haven and Spring Lake — a description that indicates they must sell Seven Steps Up to cover shortfalls in funding.

View that here with a link for donations, along with the story behind financial issues related to that organization.

Chicago singer-songwriter Alice Peacock played the first show at the unique, acoustically pristine listening room in March 2011 and has performed there several times since, along with other highly acclaimed tunesmiths and musicians, including Griffin House, Ari Hest (both of whom play there again this fall), Pat McGee, Billy Strings, May Erlewine, John Waite, Glen Phillips and many more.

East Coast singer-songwriter Stephen Kellogg currently is slated to play the final show at the 112-seat venue on Dec. 10, based on the schedule found on the Seven Steps Up website. The full schedule and ticket links can be found online here.

“All concerts currently up for sale will go as planned,” the couple stated on Facebook. “If there is one thing you can do for us as we close our doors, you can purchase tickets to one of these remaining concerts. The building will be going up for sale soon.” 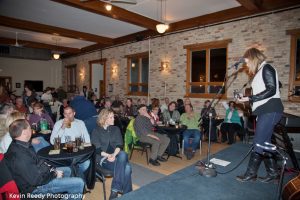 Devoted Fans: The crowd at a Liz Longley concert at Seven Steps Up. (Photo/Kevin Reedy Photography)

Seven Steps Up and the related, non-profit Courtyard Concerts have been involved in staging and promoting concerts at Grand Haven’s Lynne Sherwood Waterfront Stadium, with John Waite and Ambrosia playing the next big show there on Aug. 18. Details, tickets online here.

It’s uncertain how or if Seven Step Up’s closure might impact future shows in the series staged there, but the Courtyard Concerts GoFundMe notes the organization experienced losses “in excess of $100,000” and that the Hanks “are supporting the shortfall through personal and business loans for the short term,” forcing them to sell Seven Steps Up. They’re seeking donations to help them through.

Reaction to the closure announcement brought literally hundreds of comments from saddened fans and patrons online.

“So sad. Thanks for bringing us fabulous music,” wrote Bette DelVecchio. “You two are the best.”

Calvin Webb called it “definitely my favorite venue” and Lee Chase described the Hanks as “area pioneers for this type of venue. I have nothing but fond memories of Seven Steps Up.”

After moving from Texas to West Michigan, the Hanks purchased the old Masonic Temple building in 2001, converting the upstairs into living quarters and initially turning the main floor into an event and banquet center.

Read more about Seven Steps Up at Local Spins: