Ready for a Sunny, Upbeat 2022: Nicholas James Thomasma is ramping up for festivals and more. (Courtesy Photo)

In many ways, Nicholas James Thomasma serves as a role model for career musicians attempting to maneuver their way through the often-thorny thicket of a fickle business that presents a challenge for regional artists.

The Grand Rapids guitarist and singer-songwriter with a voice as pure as any in West Michigan’s music scene has deftly balanced solo and band obligations, regular gigging and studio work with a savvy social media approach, all while spearheading a revered songwriters-in-the-round series starring Michigan artists.

And while the pandemic pulled the rug out from under performing musicians, Thomasma pivoted quickly to concentrate on his solo endeavors and live-streams, and even returned to college to pursue business and marketing as a way of further enhancing his career in music.

At 42, the Grand Rapids Community College student and full-time musician also has plunged enthusiastically into volunteer work for Folk Alliance Region Midwest and Michigan Music Alliance, which both strive to guide and create opportunities for performing artists. 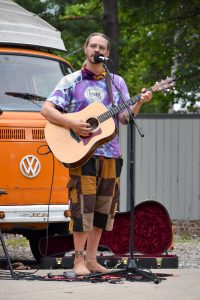 Playing a ‘Bunch of Shows This Summer’: Thomasma and his VW bus. (Photo/Nick Moran)

“The fact of the matter is, the music industry is like a $20-plus billion annual industry. That’s real money,” said Thomasma, a familiar figure on the scene, along with his beloved orange Volkswagen bus. “So, I decided I wanted to figure out how I fit into the business world.”

Because, as he points out: “I make my living as a musician. I don’t have time for a job. Being a full-time musician is too much work.”

“The goal of the show is to showcase the many incredibly talented Michigan songwriters by placing the emphasis on the stories behind the songs,” he said. “I love showcasing different types of songwriters.”

PLENTY OF NEW SONGS AND FIRING UP HIS BAND AGAIN

Of course, as a songwriting aficionado, Thomasma has a looming pile of 40 or 50 new songs “that deserve studio attention” – especially after his last solo album, “Rolling Home,” came out just as the pandemic shut everything down in spring 2020 and didn’t benefit from the usual touring cycle.

Thomasma shared two of those new songs for this week’s edition of Local Spins on WYCE – “Love is Love,” recorded as a trio at Holland’s Park Theatre, and “In the In Between.” Check out a video preview of his solo rendition of “Love is Love” and scroll down to listen to the tracks and the full radio show podcast.

The singer hopes to eventually release two new recordings – a full-band EP with The Bandwagon, and a solo album, “Thumblandia,” based on songs he wrote as part of a 2019 artist-in-residence program in Harbor Beach. But he stressed that preparing for the studio, funding these projects and completing another album can be daunting.

“Making a record is just not as easy as people think it is. You would think that if you can write songs then you can record them, but it just doesn’t work like that,” he said. “At the moment, the plan is to play a bunch of shows this summer and then think about recording in the fall and winter.” Those shows include several this summer as Nicholas James & The Bandwagon, which has played only once in the past two years due to the pandemic.

“We have a new drummer and a new bass player, but have barely even seen each other since they’ve joined,” Thomasma noted. “It’s tough being in a band, especially right now.”

The group will play several Michigan music festivals such as May’s Buses by the Beach, June’s Buttermilk Jamboree and July’s Smiling Acres Music Festival and Blissfest, among others.

After a turbulent and difficult – yet somehow productive – two years, Thomasma is thrilled to still be standing and doing what he loves.

“I made it. Not everyone did. Bands broke up. People switched careers. Many people died,” he said. “I’m just thankful that I made it through.”

This week’s episode of Local Spins on WYCE — which focuses on regional music at 11 a.m. Fridays on WYCE (88.1 FM) and online at wyce.org — also debuted new music from Eric O’Daly, The Heiden Underground, Kanin (this week’s musician’s pick by Thomasma), Tiny Car Army, Luke Winslow-King, Brian Koenigsknecht and Pretoria, as well as tracks by Steve Talaga, The Bootstrap Boys and Jordan Hamilton. Listen to the show here.