In one of his first public performances in months, the veteran singer-songwriter played Local Spins on WYCE, which also debuted tracks by Michigander, Emma Bieniewicz, Josie Kenyon and more. 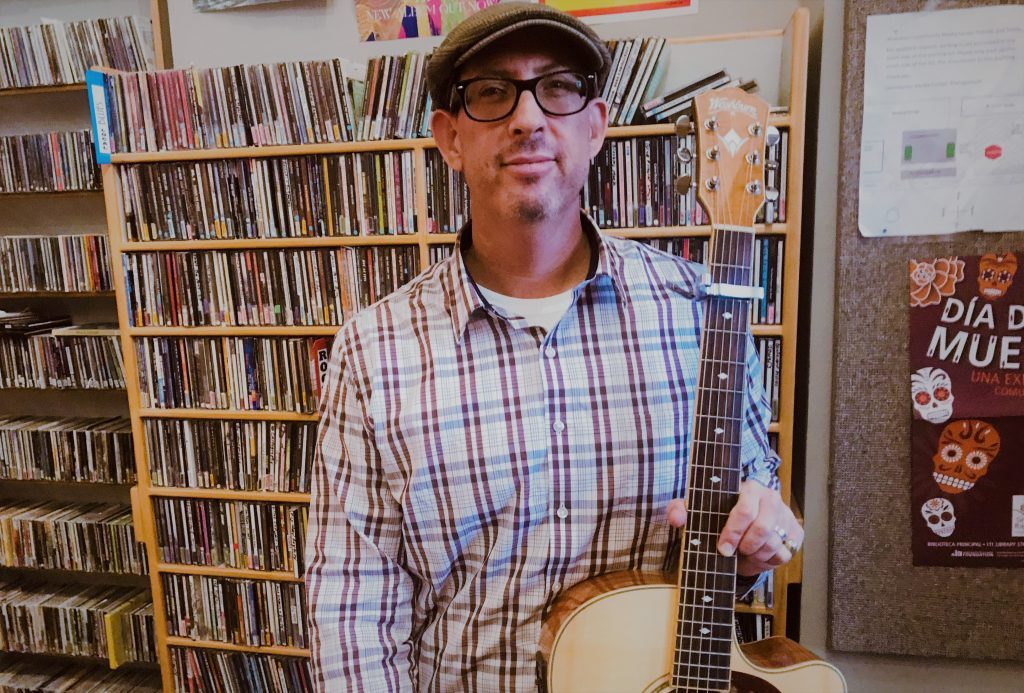 Grand Rapids singer-songwriter John Sanger has taken what began as devastating, gloomy news and turned it into an uplifting work of art.

Sanger was diagnosed with throat cancer in March, after experiencing “a little scratchiness” at the end of his live shows.

“It was an absolute super-shocker,” the singer said after learning the results of a biopsy. 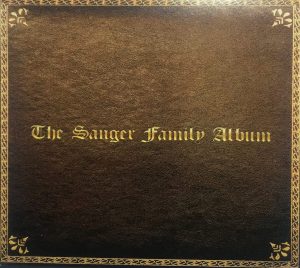 The subsequent chemo and radiation treatments forced the busy performer to the sidelines for months, sapped his energy and saw him lose about 60 pounds.

But it also gave him an “amazing sense of perspective,” especially because he was right in the middle of working on a new album about his family (he’s the youngest of seven siblings) and “the roller-coaster of life’s trials and tribulations.”

As he puts it, it was “life imitating fiction and a real perspective. … I was unable to do anything except write during chemo and radiation, and a couple months after. So, five months off from performing, just focusing on writing new songs and finishing the record and a lot of reflecting.”

In one of his first public performances in more than six months, Sanger appeared on Friday’s edition of Local Spins on WYCE, singing the new songs “Yoda & Luke” and “Sun & Moon” on the air. Watch the video of his performance of “Sun & Moon” here, with the full radio show interview and podcast below.

For Sanger, the life-changing diagnosis has convinced him to gig less frequently and focus more attention on family and friends.

“Chemo and radiation is a bummer, but it’s over now,” he said. “I’m doing great now.”

He officially releases “The Sanger Family Album” during a special show starting at 1 p.m. Sunday at The Corner Record Shop in Grandville. 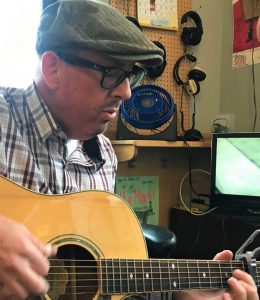 The release party will feature videos for each song from the new album, culled from footage of family home movies. Sanger said he might also perform a couple tunes along the way.

The Grand Rapids singer-songwriter, who blends covers and original music during his performances, has released several albums over the years, starting when he was just a teenager. His oldest brother, Steve, a tugboat captain, sent him recordings by Doc Watson, Leo Kottke, Skip James and other artists, which influenced Sanger’s own writing and playing.

Although Sanger usually plays solo, he also performs occasionally in The Sanger Brothers Band with his brother, Mike, a standup bassist.
Sanger also will perform Oct. 25 at BrickYard Tavern in Grand Rapids, but stressed that he’ll no longer maintain the sort of hectic gigging schedule he once had.

“I’m going to focus on growing and focusing on other people,” he said. “I think that will serve my songwriting well.”

The Oct. 11 edition of Local Spins on WYCE – taking place on the first day of the Fall Fund Drive at WYCE (88.1 FM) – also featured the on-air debut of new songs by Michigander, Emma Bieniewicz and Josie Kenyon, as well as tracks by Gabrial James (this week’s musician’s pick by Sanger), Pretoria, Guitar UP, Kari Lynch Band, The Ryne Experience and Stovepipe Stover. Listen to the podcast here. Donate to WYCE’s Fall Fund Drive here.