‘All roads lead to Blissfest’: The festival near Cross Village resumes July 8-10 for the first time since 2019 with a robust roster of artists. Get details and view the lineup. Back for 2022: Blissfest and its devoted fans. (Photo/Anna Sink)

SCROLL DOWN FOR LINEUP POSTER

After being forced to cancel the festival two years in a row due to the COVID-19 pandemic, one of Michigan’s most-beloved, longest-running music festivals will return to its familiar site near Cross Village July 8-10.

Dedicated to preserving the traditions of American and world roots music, the 2022 edition of Blissfest will boast performances by more than 70 bands and solo artists, many of them regional favorites.

“The first-year cancellation was difficult; that was the 40th anniversary. It did not occur to me, or many others, that we would not present the festival. There were financial difficulties associated with losing our primary income stream. There was an emotional toll, too, a sense of loss.” 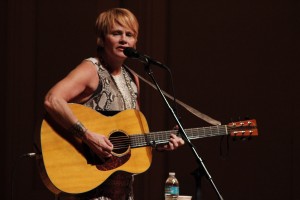 McSurely said the 2022 roster of artists is designed “to honor as many of the original 2020 lineups as possible,” with some new acts added to the mix by talent buyer Caroline Barlow.

General admission wristbands for adult non-members are $200 for the weekend and can be purchased online here. Day passes and discounted tickets for teens and children also are available. Get details about “rollover orders” for those who purchased passes for the canceled 2020 festival here.

McSurely noted there are third generation family members that attend Blissfest every year.

“We’ve heard from many people how important the event was to them; connection with loved ones, the music, being on the farm, longtime friendships developed at the festival, musicians meeting their future collaborators and bandmates, musicians being inspired and more.”

One of those Bliss regulars is singer-songwriter and Earthwork Music founder Seth Bernard, who jokes that he’s the same age as the long-running festival and has been attending the event since he was a baby. Bernard, who lives a half-hour east of Traverse City in Kalkaska County, is part of this year’s performer lineup.

“I’m excited to be back. Blissfest is a reunion, it’s a midsummer night’s dream and every square foot of that entire acreage is packed with meaningful memories,” he said.

“Some of my earliest musical inspirations and my first musical performances happened there. I’ve met and made friends with musicians from across the country and around the world at Blissfest. And I always get surprised by bands that I’ve never heard of at Blissfest. There is a beautiful musical cross-pollination of the local, the regional, the national and the international that takes place every year. I feel really honored to take part in Blissfest every year and to know and love and be in beloved community with the folks who put it on.”

Grand Rapids singer-songwriter Nicholas James Thomasma, who’ll appear at the festival with The Bandwagon, said he’s “thrilled to be performing at Blissfest,” an event he’s attended for more than 10 years but never been booked to play.

“Blissfest is one of my all-time favorite festivals. It’s big enough that you can really soak up the best of the festival vibe with great vendors, wooded or field camping, multiple stages, healing arts and world-class entertainment, but still small enough that it feels like a family reunion,” he said.

“I’m looking forward to getting lost on the winding trails through the woods once the sun goes down. It doesn’t matter what path you’re on or which direction you’re heading: All roads lead to more music at Blissfest.”

For Dobro whiz Mark Lavengood, who’ll play solo and with his band as well as sitting in with other groups, Blissfest is one of the first festivals he ever attended. “I am beyond thrilled to be getting back to Bliss post-COVID,” he said. “It’s been a long two years, but it will be worth the wait.”