Thrilled to Be Back on the Road: Nathan Kalish, who has a new album on the way. (Photo/Ryan Hartley)

Just prior to the COVID lockdown in 2020, a tornado tore the roof off of the Michigan-bred singer-songwriter’s house in Nashville while he was hunkered down inside.

Just a month or so later, while working part-time as an Uber driver during the pandemic, straight-line winds forced him to maneuver his vehicle off the road into a ditch.

“It was crazy. There were trees flying and stuff,” he recalled. “I thought I was going to die again.” So, it’s not all that surprising that the Americana- and country-fueled artist who started his career in the Grand Rapids area would pay homage to those experiences by dubbing his new band, the Derechos – a term that refers to widespread, straight-line windstorms.

“That was kind of the inspiration,” he conceded, noting that he also happens to like using echo effects on his instruments.

With a new studio album on the way, Kalish & His Derechos bring their windswept and boisterous country-driven attack to West Michigan this week, playing The Mitten Bar in Ludington tonight (April 8) and Grand Rapids’ Listening Room at 7:30 p.m. Saturday, with singer-songwriters Chloe Kimes and DL Rossi also the bill. Admission is $10 and tickets are available online here.

The Michigan jaunt – which included stops earlier this week at The Loving Touch in Ferndale and 20 Front Street in Lake Orion – represents Kalish’s first tour with a band since 2019, a rather remarkable anomaly, considering he’d averaged more than 200 shows a year across the country for many years.

“It’s gonna be a lot of fun. I’m real excited about it,” he said, describing the live shows with a drummer, pedal steel guitarist, guitarist and bassist as “a 45-minute banger set every night, kind of like an old rock show.”

The tour comes after Kalish released a new single, “Past the Everglades,” from his forthcoming new album, “Great Big Motel Bed in the Sky,” which he mixed and engineered himself at his East Nashville residence.

It also comes after a series of varied musical projects that Kalish has embraced since unleashing his psychedelic, rootsy rock band Nathan Kalish & The Wildfire in Grand Rapids well over a decade ago.

FINDING A ‘MAGICAL PLACE’ WITH OTHER MUSICIANS IN NASHVILLE

He’s traversed the United States as a member of alt-country/rock’s The Deadstring Brothers, who brought him to Nashville for the first time in 2010, started the vintage country-leaning The Lastcallers not long after that, and toured the country and Europe as a solo troubador, always championing that gritty and twangy Americana-styled approach.

And he’s found like-minded, top-notch players amid Nashville’s music-centric community, where he’s also worked as an engineer and producer for other artists.

“It’s a pretty magical place,” he said. “There’s a lot of things I don’t like about the city, but the people is the part I really love. … I’ve had the opportunity to play with some amazing musicians and make some amazing friends.”

While the pandemic lockdown cramped Kalish’s style in terms of incessant touring, it did provide ample opportunity to write and record his new collection of songs. 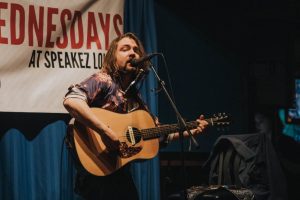 “I spent more time on it than I ever have on anything ever before really,” he conceded. “I had the time. There was no rush. I was just here in Nashville and just playing with my guys who I’ve been playing with for probably four or five years now.”

“I wrote about the loss of friends and the loneliness I was experiencing at that time – pretty much the cornerstone of most people’s 2020,” he said. “I tried to make it funny though; a healthy dose of self-deprecation and a bit of satire.”

That may stem from Kalish’s admiration of musician Todd Snider (“Just love to laugh and listen to his words and stories”) and even reflects Kalish’s view of himself.

For this week’s edition of Local Spins on WYCE, Kalish spotlighted his latest single, as well as the lead track, “Kalimotxo,” from “Songs for Nobody.”

In addition to showcasing Kalish, this week’s edition of Local Spins on WYCE — which spotlights music by artists from Michigan on WYCE (88.1 FM) and online at wyce.org — featured an interview with Jack White’s bassist, Dominic John Davis, and the on-air debut of tracks by White, Aspen Jacobsen, Wuzee & Dusty Fingerz, Chole Kimes (this week’s musician’s pick by Kalish), Jeff Socia, Deepfall, In the Valley Below and more. Listen to the full radio show podcast here.