Feed the needy and feed your musical cravings with Spins on Music’s Big List: The best in West Michigan’s live music offerings and a worthy cause. And check out the new name for The Intersection’s front lounge.

Not to get overly serious on a Monday after a spectacular weekend, but Spins on Music this week tackles serious business in a special way because the needs in this community are great and so are the opportunities to help.

Access of West Michigan this week hosts its Countywide Food Drive and I’m encouraging everyone who visits this website this week to contribute in some way – by donating canned goods and non-perishable food items to their churches, grocery stores and other drop-off sites, or by opening up their wallets and joining Access in its effort to eliminate hunger and poverty in our community.

Just bring a grocery bag filled with canned goods and other food this week to any D&W or Family Fare store, Walgreen’s, Aldi store, Fifth Third Bank or Mercantile Bank location in Kent County. Other drop-off sites are listed here.

Tonnages of food collected by the drive were down in 2011 and Access desperately needs to boost those numbers this year because more struggling families depend on those food pantries: More than 6,500 households a month visit the 75-plus food pantries scattered across the county. In Kent County, 87,000-plus people (and one out of every five kids) actually live below the poverty line. 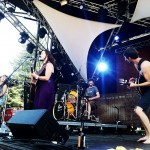 Get details about how to help out here at the Access website and get more information later this week on WZZM TV 13 and News Talk 1340 AM (WJRW) as the drive gears up.

Best of all, you can help out and celebrate at the same time by joining us at Feedback 2012 at Founders Brewing Co. at 4 p.m. Sunday, when The Crane Wives and The Fuzzrites – my 2011 “Local Spins of the Year” award winners – plus The Honeytones All-Star Revue will toast the end of the food drive with some special performances, a 50-50 raffle and more. Get more details in The Big List below.

Spins on Music is dedicating its space to the Countywide Food Drive theme all week, in a musical sort of way.

Because hunger hasn’t gone away.

Now, on to the concert guide, with a chance to win some free tickets this week. (BTW, if you didn’t already know, much-hyped Dutch DJ/musician Tiesto canceled his Friday show at the DeltaPlex.) 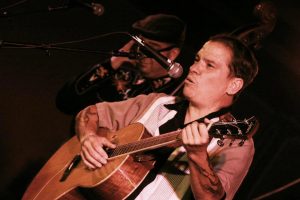 Wayne “The Train” Hancock steams back into Grand Rapids this week.

He’s “the viper of melody” and “the king of jukejoint swing,” with so much twang and country heartache you’ll be crying in your beer all night, tapping your cowboy boot toes and loving every minute of it. Wayne “The Train” Hancock brings his Texas-bred honky tonk, swing and country strains once again to the Tip Top Deluxe Bar & Grill on the city’s West Side (760 Butterworth St. SW), sure to keep fans of the likes of Jimmie Rodgers, Hank Williams and Ernest Tubb very happy. Traverse City duo The True Falsettos will open the show with their “hot jazz and western swing.”

And two lucky people will win a pair of free tickets to the show, courtesy of Spins on Music. Just be one of the first two people to “Like” the Spins on Music Facebook page, and leave a comment underneath the posting for this week’s Big List and you’re in. And remember to sign up for email updates to Spins on Music (in the lefthand column on this page).

(UPDATE: The ticket winners are David Austin and Tom Hancock. Congrats, boys, and enjoy the show.) 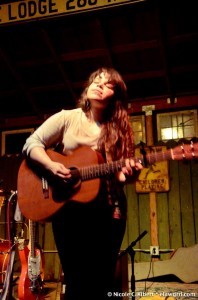 Samantha Crain will likely give you the shivers at The Pyramid Scheme.

The Oklahoma native, with a single, “Never Going Back,” that Rolling Stone last week featured as its download of the day, returns to Grand Rapids where she has lots of fans and musician friends after spending a winter here a few years ago playing open-mic nights and otherwise absorbing West Michigan’s music scene. I’m guessing her “homecoming” will be a real treat.

By the way, The Pyramid Scheme also hosts the “Michigan Hip Hop Revue” at 8:30 p.m. Saturday ($5). Get ticket details for all their shows here. 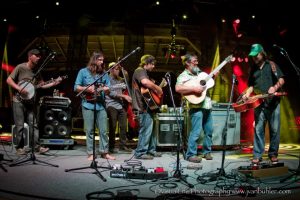 Greensky Bluegrass is sure to get musically colorful at The Intersection this week.

This is one of those “I used to know them when” bands. Kalamazoo’s Greensky Bluegrass long ago left its humble West Michigan beginnings behind to become a national force on the progressive bluegrass scene, touring incessantly across the land, winning awards and generally tearing up stages with its jam-friendly instrumental prowess.

Well, they’re back in GR still touring behind their most recent album, “Handguns,” lighting things up with fellow, rootsy Michiganders Josh Davis and The Turnips. (Greensky Bluegrass also plays Traverse City’s Octoberfest at the Commons on Friday.)

There’s also a front lounge show worth mentioning, and indeed, there’s a new name for The Intersection’s front lounge (which never really had a name): The Stache.

Dennis Beauchamp came up with the name that the nightclub chose for the front room, so Beauchamp wins free tickets to every show for the next year. Sweet, but does he have to have a mustache to collect? Would a goatee suffice? Check out the new logo.

One of those shows: At 6:30 p.m. Friday, it’s pop/rock singer-songwriter Jon McLaughlin and opening act Xenia, playing The Stache ($12 advance, $14 day of show). Details about all the Intersection’s shows here. 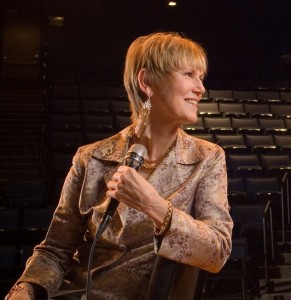 Over the past several years, the MAJIC Concert Series has collected more than $24,000 in donations to help support the Heartside Fund, Heartside Music Together (aka Hill Music Together) and the Grand Rapids Coalition to End Homelessness.

Not only that, but the monthly series has spotlighted a truly diverse collection of outstanding regional musicians and singers. This year’s series kicks off on Friday with two sets by jazz singer and recording artist Sunny Wilkinson, accompanied by pianist Ron Newman (her husband and a Michigan State University faculty member). Wilkinson has performed with the likes of the Count Basie Orchestra and the Lansing Symphony Orchestra, and headed up the vocal jazz program at MSU until 2011.

In future months, the series continues with Potato Moon, Embellish, The Jukejoint Handmedowns and more. Get details at the MAJIC website. The church is located at 250 Commerce Ave. SW with parking available in an enclosed parking garage. 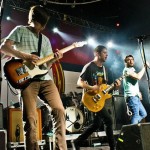 Say Anything won’t just play anything in Grand Rapids.

Pop-punk’s Say Anything is touring behind its latest album, “Anarchy, My Dear,” bringing its Los Angeles-styled volume to The Intersection, along with Murder by Death and others on its national tour.

On the same night, the front lounge features Hawaii reggae band The Green with Stick Figure and Skee-Town Stylee in an all-ages romp at 7:30 p.m., $15. 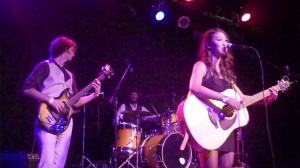 Fresh from their recent CD-release show, The Crane Wives play Feedback 2012 on Sunday.

First, a statement of full disclosure: I’m part of The Honeytones All-Star Revue which will open Sunday’s Feedback benefit show for food pantries operated by Access of West Michigan. But the real stars are headliners The Crane Wives (Americana/folk-rock) and The Fuzzrites (garage rock), award-winning Grand Rapids bands who’ve graciously agreed to donate their time to a very important cause – raising money and collecting food donations for Access of West Michigan’s food pantries for needy families.

And plenty more stars will be on hand, as truly special guests join The Honeytones for various songs in our set: singer-songwriter Ralston Bowles, guitarist Jimmie Stagger, harmonica players Hank Mowery and Dave Winick, drummers Jerry Seim and Tom Taylor, and yes, even members of The Crane Wives and The Fuzzrites. They all recognize the importance of supporting the work that Access does. 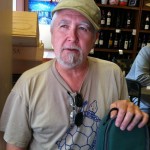 It could end up being one beautiful musical mess and a fabulous celebration of the end of a successful 2012 Countywide Food Drive, with a 50-50 raffle and CD sales that will feature The Crane Wives’ acclaimed new album, “The Fool in Her Wedding Gown” and The Fuzzrites’ garage-rock masterpiece “Baby Cakes.”

Tune into News Talk 1340 AM (WJRW) at 9:30 a.m. Wednesday for a special expanded edition of Local Spins Live, with more details about Feedback and the Countywide Food Drive. And if you can’t make it to Sunday’s show, you can still donate to the cause by clicking here. Because hunger hasn’t gone away. 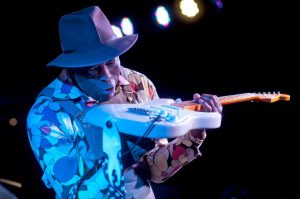 Buddy Guy will try to cool off his sizzling guitar at The Orbit Room this weekend.

At one point not so long ago, Jonny Lang was the upstart young gun in this “hot shot blues guitarist” equation, but Lang’s now in his early 30s and stands on his own as a soulful singer with impressive chops. I’ve seen him on stage countless times and never been disappointed with a live Lang performance. And I’ve interviewed him enough to respect how he’s matured as an artist and as a man who’s overcome personal foibles to translate his spirituality into powerful music.

But then there’s Buddy Guy. An honest-to-god blues legend who may have had as much influence on rock ‘n’ roll guitar development as any musician who’s walked the planet. And while his performances can be unpredictable and uneven, he commands the kind of respect and attention due all the greats of his genre: B.B. King, Albert King, John Lee Hooker, and so on. 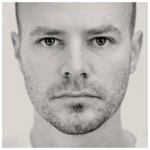 Derek Webb and Page CXVI at the Ladies Literary Club, 8 p.m. Thursday, $20 – A fabulous place to see this singer-songwriter perhaps best known for his work with Caedmon’s Call. And there’s a post-concert conversation with Webb, too.
Details and tickets online here.

Pop Evil at The Orbit Room, 8 p.m. Friday, free – This “Shockpocalypse” free show sponsored by WGRD-FM/Shock Top Lemon Shandy features one of Grand Rapids’ most successful, hard-touring hard-rock outfits, Pop Evil. The show is free but you need tickets to get in, so go to wgrd.com for details or tune into 97.9 FM. It’s a 21-and-older show.

The Vincent Hayes Project at Billy’s Lounge, 9:30 p.m. Friday, $5 – A resident of the lakeshore, Hayes plays the blues like he was born in a smoky Chicago blues club. Same goes for his band. And Hip Pocket rolls into Billy’s on Saturday with its horn-infused musical magic, also $5. (By the way, the always entertaining Flashing Blue Lights brings its pop-inflected Americana to Billy’s on Thursday, $5)

KinFyre at Zellie’s Opry House in Howard City, 8 p.m. Saturday, $8 – If you’re a fan of bluegrass and folk and you’ve never been to Zellie’s up in Howard City, you don’t know what knee-slapping passion you’re missing. This amazing venue carved out of an old church hosts some of the best regional acoustic music you’ll hear anywhere, and that includes the Celtic-hued KinFyre, which brings its retro “1930s Radio Show” to Zellie’s at 8 p.m. Saturday. (There’s the usual Friday night jam at Zellie’s this week, too.) Check the full schedule here. 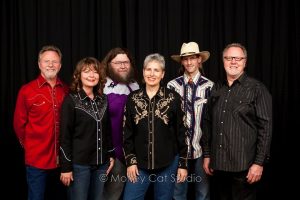 Joshua P. James & the Paper Planes at Wealthy Theatre, 8 p.m. Saturday, $10 (with discounts for students and seniors) – I’m quite impressed that the Grand River Folk Arts Society has nabbed this energetic young folk/blues/country outfit from Ohio, which plays with inspirational fire. Get details online at the society website and the band’s site. A cozy place to see this trio uncork its music.

Sister Wilene at Fennville’s Salt of the Earth, 7 p.m. Sunday, $12 – Check out the bracing, vintage country of Sister Wilene, a Michigan band of veteran musicians — a band which includes Roger Brown, a guy who once played with Gerry Rafferty overseas and who’s also distinguished himself with the Midnight Cattle Callers. Others in the band include Mary Sue Wilkinson, Joe Wilson (Steppin’ In It), Kevin Gill and Roger Tarczon. Get details at the Salt of the Earth website.