Get a behind-the-scenes glimpse into the mind of innovative electronic whiz Nick Rowland, aka Super Future, who just released a new song and headlines a big weekend show. And listen to his new single. 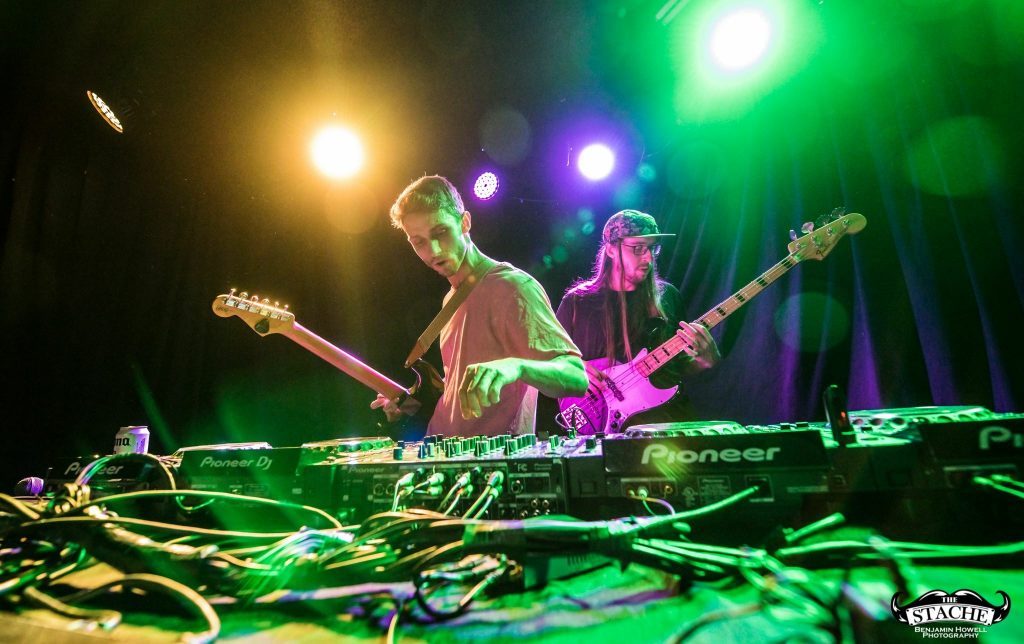 THE ARTIST: Super Future
THE MUSIC: Genre-spanning electronic/bass music with live instrumentation
WHERE YOU CAN SEE HIM: 8:30 p.m. Saturday at Holland’s Park Theatre for “The Park After Dark,” headlined by Super Future with WokeZan, Kaptain, Jake Walker, Wayso, Wuzzy, Goolay and Critta ($15 advance, $20 day of show); April 20 at Creston Brewery in Grand Rapids with Shooka

SCROLL DOWN TO LISTEN TO SUPER FUTURE’S NEW SINGLE

As he sits down for an interview with Local Spins, Nick Rowland can’t help but point out the music playing in the background.

“What’s playing here right now, I would love to bring some aspect of live soloing to it,” says the Grand Rapids musician better known as Super Future. 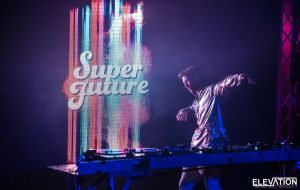 “It doesn’t seem hard to me to prepare a little bit of a guitar element for a show rather than just waking up, bringing a USB, playing some songs and then leaving.”

A chemical engineer turned music creative, Rowland’s life ever revolves around music. From his hometown of Rochester Hills to Grand Rapids, he has taken on the role of a musical pathfinder, dancing on the boundaries of the bass music world.

Stage-named after the musical style he most closely identifies with – future bass – Rowland pulls inspiration from different aspects of various genres including pop, electronic and R&B.

THE CHALLENGE AND ARTISTRY OF ADDING LIVE INSTRUMENTATION

A hard-to-define genre in itself, bass/electronic music allows Rowland the creative freedom to meld different types of music and sounds into his own distinctive style.

That freedom includes using live instruments over pre-recorded bass tracks for live sets. This crossover of recorded, electronic music with live instrumentals is far more challenging to pull off than one would expect, but Rowland says it’s worth the extra effort to incorporate that special element. 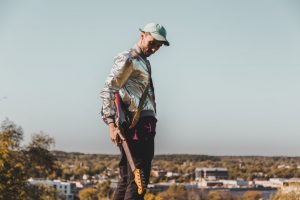 Not Just Heavy Bass and Headbanging: With guitar in hand, Rowland aims make a deeper impact on listeners. (Photo/Sarah Ford)

“One person can press a button, but it’s kind of more artistic to bring something live that you can do free form,” he insists.

Instead of just heavy bass lines and headbanging, Rowland aims to bring emotion to his music — something that leaves a deeper impact on those who listen. Focused on the overall vibes and moods in his songs , he finds the tone he wants with melodies that only live instruments can provide.

By showing “the pretty side of things,” his music hits closer to home for mainstream audiences, serving as a bridge for those who aren’t huge devotees of electronic music. That’s what drove Rowland to create his 2018 track, “Endless Love,” with nearly 300,000 plays on Spotify, and his brand new single, “Again,” released just last week and already earning raves from TheElectricHawk.com as “uplifting” and EDMSauce.com as “another powerful future bass track.” Scroll down to listen to the single.

With more live elements in his shows, Rowland aims to grow the electronic music community and create a sort of sustainability in his work. If the draw of regular DJs eventually fade – and knowing that music’s popularity is cyclical – the more live elements Super Future incorporate into his shows the better.

That approach extends to his work with other artists, in West Michigan and across the country, which further enhances the Super Future sound.

Rowland frequently collaborates and performs with the Grand Rapids’ Samsara Family, a West Michigan electronic music collective. As head of the collective, Rowland says he spends about a third of his time managing Samsara, which brings together artists under its umbrella and promotes shows where many of these artists use live drums or guitars for their sets.

SAMSARA COLLECTIVE BRINGING A DIFFERENT, ‘NEW ELEMENT TO THE SCENE’

“We wanted to bring a new element to the scene,” Rowland says of Samsara, which features nine artists including himself.

“We wanted to be different. There’s more to it than just an hour of house music. We want to kind of help the community feel like different corners of genre can all come together and be one community.” 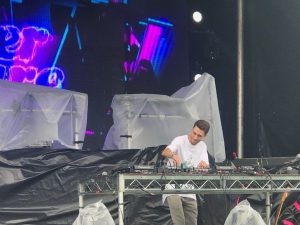 Influenced by artists such as Louis the Child and The Chainsmokers, Rowland is committed to keeping his music fresh while offering radio-friendly tunes and an interesting, weird style of bass.

Bringing this approach to his collaborations with local artists, dancers, designers and promoters, Rowland remains excited about West Michigan’s potential for music expansion and growth.

“I didn’t expect it to be this cool. It just started to flourish with the young generation out here, breaking stigmas from older generations,” says Rowland, who now headlines shows and has connected with some of his favorite artists as he pushes the boundaries of his music.

“There’s a lot of spirit of art and music that’s growing out here. I’m just happy to be a part of it.”

Super Future headlines “The Park After Dark” at Park Theatre, 248 S. River Ave. in Holland, at 8:30 p.m. Saturday, with WokeZan , Kaptain, Jake Walker, Wayso, Wuzzy, Goolay and Critta also on the bill. Tickets are $15 advance, $20 day of show. Doors for the all-ages show open at 7:30 p.m. Details and tickets online at parktheatreholland.org.