For 18 years, the concerts have raised money for Kent County food pantries and spotlighted local acts. Feedback fires up again on Sunday at Founders Brewing. 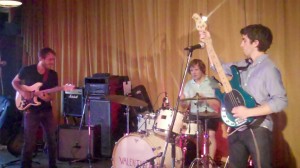 Little man walked up and down to find an eating place in town,
Well, he looked that menu through and through, to see what 15 cents could do
One meatball, one meatball, he could afford but one meatball

Few songs so poignantly describe the plight of the poor and hungry … the shame, the sadness, the frustration. 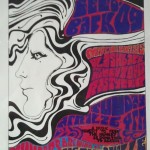 Actually, after researching the subject a bit, I’ve discovered there’s a dearth of tunes that effectively tackle the subject of hunger. Maybe that’s why it’s become the defacto theme for Feedback benefit concerts that have raised money for Kent County’s food pantries for nearly two decades, and it’s a tune you’ll hear at the 2012 Feedback on Sunday. (See a short list of other hunger/poverty songs below.) 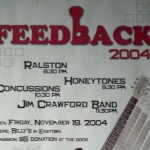 Face it: It’s easy to shift our gaze and turn away at the embarrassment of someone who’s so clearly down and out, panhandling for spare change on the street or fumbling to find the coins they don’t have to pay a modest tab.

And I’m convinced the long economic downturn has created more of these “little men,” folks once comfortable with their lot in life who now struggle to make ends meet.

Indeed, Access of West Michigan — which coordinates and helps fund 75 food pantries for needy families across Kent County and which is staging its Countywide Food Drive this week — notes that a growing number of pantry users are new to the system due to job loss, disability, underemployment or deaths in the family.

About 15 percent of Kent County’s residents live below the poverty line, which means many of them go to bed hungry. Worse yet, one in five are children. 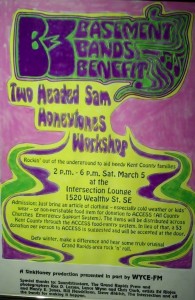 Those are the kinds of troubling statistics that convinced my bandmate in the Honeytones, Charley Honey, and myself to launch Feedback nearly 20 years ago – almost-annual benefit concerts starring local bands. The idea was to raise money and awareness. And sadly, that’s still the goal because needs continue to grow and it’s why Spins on Music is dedicated to that effort this week. (See how to help and take part in that Countywide Food Drive here.)

That first show at the old Intersection in Eastown back in 1994 was actually dubbed the “Basement Bands Benefit,” featuring such under-the-radar outfits as Two-Headed Sam, Workshop and yes, an early lineup of The Honeytones.

It may have been the loudest concert I’ve ever played, with ear-splitting feedback literally resounding off the walls of that narrow nightclub … which could be how my wife came up with the double-entendre name that’s graced the benefit ever since.

Feedback’s history has been colorful to say the least – as posters created for the benefit over the years prove – with rollicking shows staged at The Intersection, Martini’s/Billy’s Lounge, The B.O.B., Rhythm Kitchen and, as of late, Founders Brewing Co.

And while the cause has always been first and foremost, don’t get me wrong: It’s been an absolute blast, musically speaking.

The camaraderie and selfless giving of West Michigan’s musicians have been responsible for keeping Feedback alive for nearly two decades. 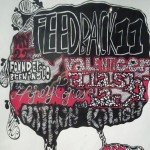 The almost-annual benefit has spotlighted just some of the Grand Rapids area’s most amazing and talented groups/artists: Domestic Problems, Valentiger, Ralston Bowles, The Willeys, The Concussions, Mid-Life Crisis, Harry Lucas & the Lowdown, Knee Deep Shag, Nathan Kalish, The Jim Crawford Band, Roberta Bradley, Flashback and many more still to come. (Oh, sure, there have also been a few promising bands that just, well, fizzled out not long after their Feedback glory.)

For 2012, I managed to convince both winners of my most recent Local Spin of the Year Award, The Crane Wives and The Fuzzrites, to headline. Special guests Ralston Bowles, Jimmie Stagger, Hank Mowery, Dave Winick and some past Honeytones members will also perform with the Honeytones All-Star Revue to open the show, with The Fuzzrites and Crane Wives pitching in for good measure. (The Crane Wives also are promoting a terrific new album, “The Fool in her Wedding Gown,” which you can read about in a REVUE Magazine story here.) 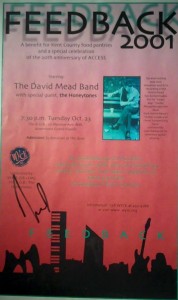 Even as word of this year’s show got out, I had musicians and bands contacting me saying they’d love to be a part of future Feedbacks – something that seems to happen regularly within a music community that cares about, yes, that “little man.”

And to prove lots of musicians nationwide care, here’s a link to Artists Against Hunger & Poverty, an organization that works for the cause in musical fashion.