Five groups will play Billy’s Lounge in Grand Rapids on Sunday, vying for a chance to travel to Memphis in January as part of the Blues Foundation’s International Blues Challenge. When the West Michigan Blues Society hosts this year’s International Blues Challenge competition on Sunday at Billy’s Lounge in Grand Rapids, it will showcase several up-and-coming acts from across the region.

“As one of the newer emerging blues bands, we are extremely excited and so grateful to have been invited to compete this year,” said Ryan Nykamp, singer for The Left Handed Rollers, a five-piece band formed in 2019. “We are currently in the process of recording our first EP and plan to debut a few of our new tracks at the Blues Challenge this Sunday,” he said.

The annual competition will feature 30-minute sets by each band. Doors open at 1 p.m. Sunday at Billy’s Lounge, 1437 Wealthy St. SE in Grand Rapids, with the competition running from 2 p.m. to 6 p.m. Admission is $5.

A panel of judges will evaluate the groups based on blues content, originality, vocals, instrumental talent and stage presence.

The winner will not only join more than 200 other acts at the international competition staged Jan. 24-28 on Beale Street in Memphis, but also play a date at Billy’s Lounge to help cover trip expenses and open the West Michigan Blues Society’s “holiday party” on Dec. 4. Renowned blues guitarist Amanda Fish from Kansas City will headline that party at Billy’s Lounge. For the North Grove Killers – a band first formed in the Whitehall and Montague area to raise money for the Killer Blues Headstone project that places headstones on unmarked graves of blues icons – Sunday’s contest provides an opportunity to showcase the group’s original compositions.

“I think fans will be impressed by the intensity and originality of our set,” said songwriter, singer and guitarist RJ Nordlund, who’s also brewmaster and partner at North Grove Brewers in Montague.

The Beer City Blues Band, meanwhile, first got together in 2021, with drummer Mike Fitzpatrick, bassist Jeff Szarowicz and guitarist-singer Tom Myers creating what’s now a blues power trio (after starting as a four-piece). Myers said the band unfurls as “a high-energy, blues-rock band that enjoys performing live and connecting with our audience,” paying homage to the likes of Robert Johnson, Muddy Waters and Willie Dixon.

“Our band performs an eclectic mix of choice blues and blues rock tunes that you probably won’t hear anywhere else,” he said. “Fans can expect a ‘shock and awe’ performance from us that showcases the band’s tight rhythms, soaring lead guitar and soulful, bluesy vocals.”

Many area blues fans already are familiar with the fifth act on tap Sunday. Describing their approach as “outlaw blues,” Grand Rapids’ Rochelle and The Spoilers released the full-length album, “Unfiltered,” in 2015, followed by a live EP in 2021, and they’ve performed regularly across the region.

A sixth band – Grand Rapids’ Steve Hilger Band, which recently celebrated its 15th anniversary – had to pull out of the competition earlier this week. Band frontman Steve Hilger told Local Spins that his house on Florida’s Sanibel Island was destroyed by Hurricane Ian and he is “feverishly trying to salvage” whatever he can.

Learn more about the West Michigan Blues Society and get more information about the blues challenge event online here. 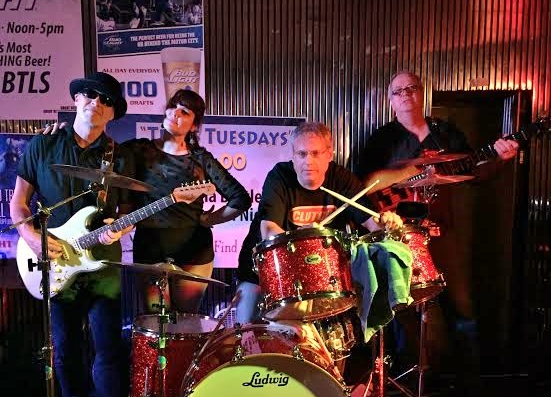