Both Grand Rapids blues bands mark their 15th birthdays with special performances in June. Learn more in a Q&A with both bands at Local Spins. Battling through the highs and lows and reveling in plenty of fun as a blues band for 15 years certainly produces its share of memorable performances and memorable moments.

And as it turns out, two Grand Rapids blues favorites – The Steve Hilger Band and Thirsty Perch Blues Band – both celebrate their 15th anniversaries this month with opportunities for fans to celebrate right along with them.

The Thirsty Perch Blues Band, meanwhile, will mark its 15th birthday with a free show June 28 at part of the Rogue River Blues Series at Garden Park in downtown Rockford.

Local Spins asked singer-guitarist Steve Hilger and Thirsty Perch guitarist-singer Chris Collins to reflect on each band’s legacy. Scroll down to listen to tracks from each band. Local Spins: How excited are you about celebrating your 15th anniversary?
Hilger: We are all very excited to perform our 15th anniversary show. Over the years, we have played a lot of venues, large and small, and a lot of festivals large and small. We have played for 15,000 people and other times, just for the sound guy! But, in all of that, we have developed musically and solidified lifelong friendships. Our very first show was acoustic. We have since done some acoustic shows in Memphis as semi-finalist duos in the International Blues Challenge, but this will be the full band.
Collins: Rogue River Blues Series and the city of Rockford put on the best local blues series in West Michigan. Always a fantastic crowd and a professional atmosphere with lots of choices to dine before or after the show.

Local Spins: Who are your current band members and has the lineup changed over the years?
Hilger: The current (Steve Hilger Band) consists of Steve Hilger, vocals, songwriter, guitar; Dave DeVos, bass; Bill Roelofs, drums; John Gist, saxophone; Steve Talaga, keyboards; Deborah Richmond, vocals; Rob Mulligan, percussion. The core group has not changed over the years. Brian Drews has also been a staple in the band on keys. He still plays with us and is on some of our CDs. We are also bringing back Matt Young on guitar who played with us often during the early years.
Collins: Current Thirsty Perch Blues Band members are Chris Collins, guitar & vocals; Andrew Ogrodzinski, guitar & vocals; Chris Carr, bass & vocals; George Ferguson, drums; Charlie Luscombe, harmonica & vocals; Clif Metcalf, organ & piano. The band lineup changed in 2011 when Andrew Ogrodzinski and Chris Carr were brought into the band. The experienced duo helped tighten up the band and opened us up to new ideas when creating our recording of original music and taking the next steps forward. Fast forward to 2018 when keyboard player Clif Metcalf joined; he helped us complete our sound and move yet to another level. 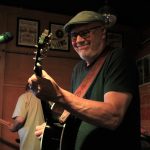 Local Spins: What can fans expect from your show and how would you describe your stylistic approach?
Hilger: As for the music, we will start out with simple, finger-picking acoustic blues and build to high-energy tunes, both original and some of the covers we have done over the years with the electric band. Our style is somewhat unique. The finger-picking blues is fairly traditional, but the full band material includes our electric blues style, just performed on acoustic instruments.
Collins: Just the same rockin’ blues originals and covers that kept us alive all these years but we have some planned guests stopping in so do not miss this show. We are basically the same style as when I started putting the band together in 2007; it took a good year of moving musicians in and out to find the first formula to get a gig and start playing out. But once it started, it kept rolling, and here we are 15 years later. The best memories would be all the opening act shows we had – especially Kenny Wayne Shepherd and Joanne Shaw Taylor, Ana Popovich and many more. And it was the friendships created that still last today.

Local Spins: Any new recordings in the works and what other gigs do you have for the summer?
Hilger: As for gigs this summer, they are few. This is because I am on the United States Archery Team this year and that is a pretty big commitment. My jazz quintet is playing at GRNoir on July 6. I’m still working as a lawyer although retirement is in sight. During retirement, I plan on ramping up the electric blues with a power quartet playing high-energy electric Chicago- and Texas-style blues. More to come on that. It is in the works.
Collins: Always working on new material as that’s what this band was put together for, but no (release) dates we can share yet. Summer is our favorite time to play because of all the outdoor events, but due to some of us being less available this summer, it will be less. A normal year can include 20-25 shows. In addition to the Rogue River Blues Series, we play July 23 in Jackson (Hot Air Jubilee), Aug. 19 in Ada for Beers at the Bridge, Aug. 20 in Pentwater, Aug. 27 in Union City for the Turtle Lake Music Festival.