Check out the latest batch of Michigan releases showcased at Local Spins and sample tracks from the featured albums, including recordings by Blueflowers and The Dead Shepherds. 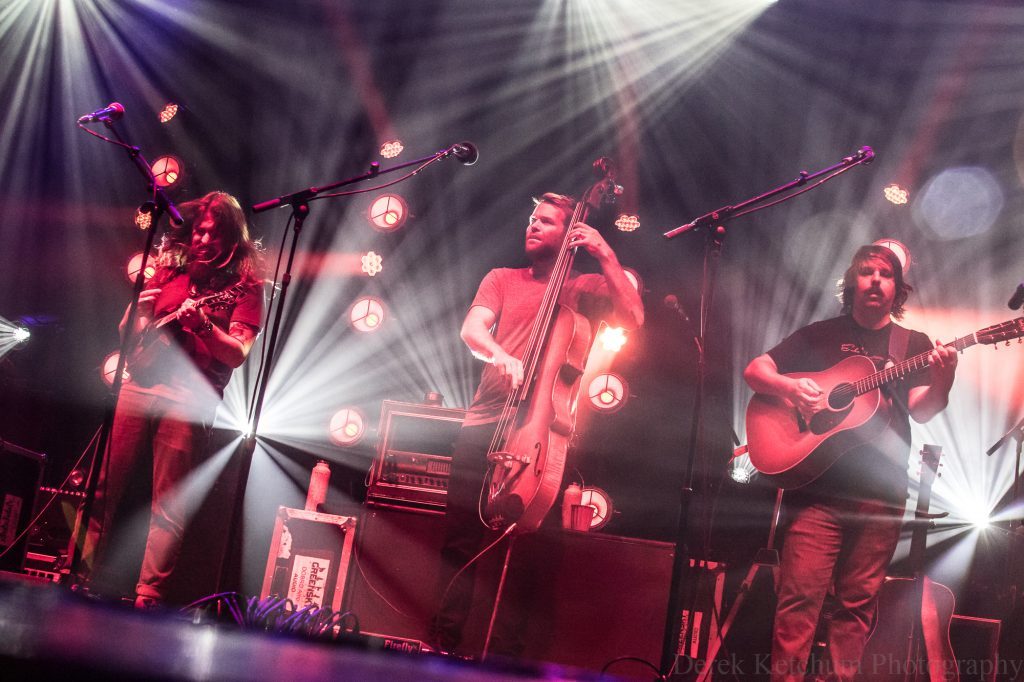 A Snapshot of the Band’s Growth and Momentum: Greensky Bluegrass’ “All for Money.” (Photo/Derek Ketchum)

The second batch of Local Spins album reviews for 2019 spans the state and several genres, leading off with the buzzed-about new studio album from Michigan progressive bluegrass faves Greensky Bluegrass, as well as a new live project by singer-songwriter Joshua Davis.

The roundup also features reviews of recordings by McWeakerton, Ajax Stacks, The Dead Shepherds and Blueflowers.

Browse the releases, find out where some of these acts are performing and listen to tracks from all of the featured artists. 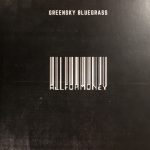 Greensky Bluegrass
“All for Money”

The Kalamazoo-bred quintet’s latest collection is perhaps the most vulnerable, honest and personal it has issued to date. Featuring a dozen tunes – from the edgy, album-opening “Do it Alone,” to the anthemic “Courage for the Road,” the dark and aggressive “It’s Not Mine Anymore” and the poignant title track “All For Money” – the band’s seventh studio album offers fans some of the strongest songs it has written, both lyrically and musically.

“Over the years, every album has kind of been a snapshot of where we’re at and I think this time we went into the studio with the mindset of ‘Let’s just make a record like a live set, let’s just get after it that way,” guitarist/vocalist Dave Bruzza told Local Spins. “We really opened up to some new ideas. … Things are changing. The way we structure songs is a little different. The way that we’re delivering our vocals is different. It’s just a snapshot of our growth and our momentum.”

“Known for its live shows,” as Bruzza pointed out, the band captured that essence well, most specifically with a trio of songs that approach or eclipse seven minutes in length, with jammed-out turns and tempo changes one has come to expect when watching them in concert. Highlighted are the sometimes spacey and psychedelic solos, and at other times, sharp and pointed fills by Dobro player Anders Beck. It’s the sort of thing that keeps many fans on the road to follow this now mostly Colorado-based five-piece.

But the hook has always been the songwriting of mandolinist/lead vocalist Paul Hoffman and of Bruzza, the latter getting major assists this time around from northern Michigan lyricist Aaron Allen. Standing tall are lines such as Hoffman’s “Spent too much time looking for the right song to sing/it matters more the love it brings/but if you need a voice, I’m yours friend/for something better in the end” in the album-defining title cut, and the Allen-penned “She wrote it all down with an eagle’s feather/dipped in cocaine and blood/A diamond needle on a broken record/of a melody never sung” on Bruzza’s “Murder of Crows.”

Further exhibiting the group’s diversity, the delicate and lovely “Ashes,” broken-hearted “Collateral Damage” and sentimental “Like Reflections” showcase Greensky’s softer side as band members “spill their hearts with music.” Allen also lent his hand to a cowrite with Michael Arlen Bont on the banjo-led “Cathedral Eyes,” a song that shows off rare interchanging lead vocals by Bruzza and Hoffman, as well as pitch-perfect harmonies. But make no mistake: No song on this album would be what it is without the constant and consistent rhythmic backbone of bassist Mike Devol. Recorded over a three-month period last spring at Echo Mountain Studios in Asheville, N.C., “All For Money” was co-produced by Dominic Davis and Glenn Brown. – Ryan Boldrey

Website: https://greenskybluegrass.com/#!/
Upcoming Shows: Feb. 8-9 at The Fillmore in Detroit (with Billy Strings)
Listen: “Courage for the Road” 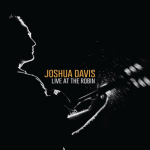 Joshua Davis
“Live at the Robin”

It’s not every day someone has the opportunity to glimpse the process that goes into recording an album, or to be a spectator at an intimate live show that later becomes one. Witnessing Joshua Davis undertake this process on the first of two November nights in which he performed three sets at Lansing’s cozy Robin Theater afforded me the chance to do the latter as Traverse City’s favorite adopted son put on full display the beauty, vulnerability and the quest for perfection that defines him as one of Michigan’s best singer-songwriters.

From fresh approaches on old classics from his Steppin’ In It days (“Pastures of Plenty,” “Tin Can Sullivan,” “The Ghost of Richard Manuel,” “Last Winter in Copper Country”) to selecting songs from his lengthy solo career (“Midnight Ghost,” “Nowhere Without You,” Bob Dylan’s “You’re Gonna Make Me Lonesome When You Go”), Davis treated a capacity crowd of 70 audience members at each of his three sessions to exactly how his songs sound best — live.

The resulting release – due out Feb. 1 – offers a significant and special snapshot into his 20-plus-year career as a recording artist. As an artist who has constantly challenged himself, Davis is well aware that once an album is released there’s no turning back. He accepted that challenge head on, putting forth an honest, careful release in which most songs had but one take; only a few went through two, thus preserving the true essence of a live show. What’s most impressive is that his voice sounds stronger and more melodic than in any prior recording. And with no other musicians on stage, there was no way to mask any of the extremely few and far between “perfect imperfections” that are destined to appear on a live album.

Self-produced and engineered by Glenn Brown, “Live at the Robin” plays like a greatest hits album presented in a fresh intimate fashion, filled with stories behind the songs. For any fan of Davis’ work, this album is a must listen. – Ryan Boldrey

Website: https://joshuadavismusic.com/home-2
Upcoming Shows: Feb. 1 at Hannah Community Center in East Lansing; Feb. 8-9 at Old Town Playhouse in Traverse City; Feb. 13 at Salt of the Earth in Fennville; Feb. 15 at The Ark in Ann Arbor; Feb. 16 at Old Dog Tavern in Kalamazoo
Listen: “The Ghost of Richard Manuel” 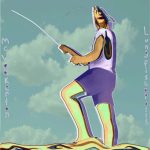 For some listeners, McWeakerton’s debut might feel like a blast from the past. At times, it harkens back to the early days of ’90s emo, an era when artists like The Promise Ring and Sunny Day Real Estate stood on the front lines of a new movement in alternative music. There’s clear punk influence here, but those listening to “Lungfishopolis” might also catch a hint of the laid-back, minimalist grooves of early Modest Mouse, or even the subtle intricacies of American Football – though it’s not as wistful as all that. McWeakerton is still fresh as a band, but the Grand Rapids group already seems to have a clear vision of the sound its shooting for: math-rock, garage rock and a bit of early emo all rolled into one. “Red Herring” and “Last Weak” are highlights, with the latter ending much too soon. “Hollow Bastion” is a preview to all the qualities that make this record such a delight: a sparse drifting soundscape, quick tempo and time changes, and jabs of distorted guitar riffs which all play into the overall feeling of this record. The album shines as a whole rather than as a group of standalone songs, proving the tight musicianship of those involved. The relaxed yet nostalgic mood of the record reminds the listener not to take life too seriously, and it shows a band that’s just having fun doing what they love. – Devin Dely 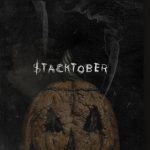 Lean back on that couch and relax because Grand Rapids-based hip-hop artist Avery Jackson, aka Ajax Stacks, delivers relaxing beats and nice flows on his latest album, “Stacktober.” Stacks has always brought high-energy and hard beats in the past, but this time around he brings in a new sound, experimenting with lo-fi and jazz-hop. “Stacktober” delivers its high intensity in a subtle way. On the opening track, “If I Lived on Mars,” Stacks creates a hauntingly calm beat, but when he brings in his technical rap and layers it, everything shifts, creating a pleasurable wave of energy that doesn’t disrupt the flow of the chill beat. The closing track, “Low, Low,” is dense with drowsy, but hypnotic vocal delivery that entraps the senses in a pure state of bliss. With this short six-track EP, Stacks manages to show off his versatile and diversified lyrics and leaves the listener wanting more. – Matthew Tep

Website: https://www.facebook.com/AjaxStacks/
Upcoming Show: Feb. 2 at the Scratchouse in Austin, Texas
Listen: “If I Lived on Mars” 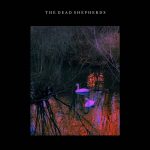 The Dead Shepherds’ self-titled album lives in a deep purple tone, nostalgic for the roots of classic country and folk rock, while also mixing in psychedelics. The opening tune “No Moss Grows” perfectly introduces the band’s gloomy beach vibes and the overall mood of the album. Lou Faino (vocals, guitar, piano), Christopher Dragone (electric guitar, vocals), Justin Advek (upright bass, electric bass, organ, vocals), Evan Follmar (drums, percussion, backing vocals) and Max Morrison (cello) pride themselves in using no computers in the recording of the album. This goes along with the theme of their most classic country-inspired songs, “Locket Around Your Neck” and “Tiny Things.” “Faces in the Tapestry” gives hope of bright acoustic guitar melodies, and then takes a turn back to the deep purples, the color wheel that the band thrives in. The album takes you on a journey of dark, haunting lyrics, then gives you no words at all with the stand-alone hallucinatory intro before the final song, “When We Were Young.” When Faino’s voice rings out on the final chord, you’re left feeling like you just escaped a forest of your deepest, darkest secrets – a sigh of relief and a cleansing breath all at once. The album, by the way is nominated for best rock album at the 20th annual WYCE Jammie Awards in February. – Liv Conaty 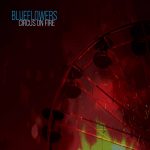 The Blueflowers
“Circus on Fire”

After a four-year hiatus, the Detroit-area band The Blueflowers has a dynamic and much darker, heavier new recording: “Circus on Fire,” which at times plays like a late ’70s record, with lead singer Kate Hinote channeling a bit of Pat Benatar with a dash of Stevie Nicks. The Blueflowers possess a brilliant ability to meld sounds together seamlessly, with a steady mix of dark moodiness and hypnotic intrigue that’s mesmerizing – a milieu that’s perfectly expressed on the title track. The band has honed its distinctive style of psychedelic and goth-leaning indie-rock over the past few years, now showcased in masterful fashion with “Circus on Fire.” – Olivia Menchaca