The band playing its first show in 18 months and eyeing its first release since 2010 was featured for this week’s Local Spins on WYCE, which also debuted tracks by several other Michigan artists. 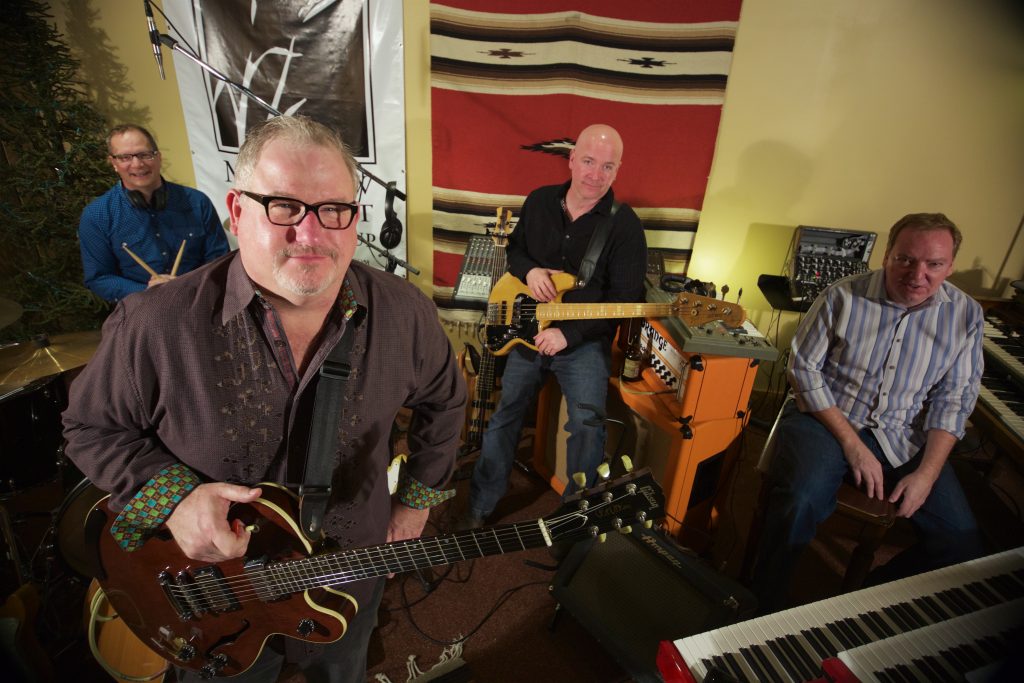 ‘Up North Music’: Michael Crittenden & Troll for Trout administer ‘the medicine that a lot of us need.’ (Courtesy Photo)

There’s no better “theme song” to kick off Troll for Trout’s first collection of original material in decades than “Gettin’ Outta Town.”

“It feels so free to be this direction again/Feel the pavement turn to dirt and the deer go on alert/It feels so good because when everything seems wrong/The best medicine I’ve found is gettin’ out of town.”

The band formed 26 years ago has always represented the intoxicating vibe of Michigan’s great outdoors, from fishing its rivers to singing around a campfire to escaping the pressures of modern life. 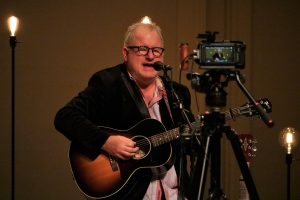 Ready to ‘Put a Bow on the Package’: Michael Crittenden. (Photo/Anna Sink)

And now, that band is getting ready to release its first album since 2010’s “The First Fifteen” compilation of Trout favorites.

“I think we needed a theme song – something that sort of reiterated the mantra and the lifestyle that we’ve chosen and tried to promote,” conceded Crittenden, who founded the band that also features Brian Morrill on drums, John Neil on keyboards and John Connors on bass.

“I’m going to a place that makes me feel like I’m alive and I’m going to forget about all the day-to-day crap that’s going through my head: the medicine that a lot of us need.”

The new, as-yet-untitled album planned for an October release represents years of songwriting and recording, with the roots of some tracks recorded several years ago.

“We’ve been threatening to make a new record for a long time, but then we keep getting sidetracked,” said Crittenden, a producer and sound engineer who also owns Mackinaw Harvest Studios in Grand Rapids.

The accumulation of tunes, he reasoned, just took time to jell as a complete collection.

HOGGING ‘THE WHOLE NIGHT’ FOR FIRST SHOW IN 18 MONTHS

For this week’s edition of Local Spins on WYCE, Crittenden debuted two tracks from the upcoming studio album – the aforementioned “Gettin’ Outta Town” and “Got the Radio On.” Scroll down to listen to the songs and the full radio show podcast.

Due to last year’s pandemic shutdown, Troll for Trout also is preparing to play its first full-band concert in one-and-half-years. 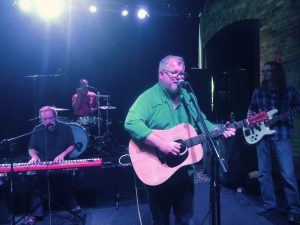 Playing the patio outside GR’s Sandy Point Beach House: It will be Troll for Trout’s first full-band show in 1-1/2 years. (Photo/Local Spins)

Because they haven’t played in so long, Crittenden joked, “we’re going to hog the whole night,” performing Trout classics as well as new material.

The anticipation is high, he conceded: “Just the experience of feeling the music coming out of all four of us or five of us at the same time, that’s why we started doing this in the first place, right? Because it felt cool when you put it together to feel that energy coming off the stage.”

For Crittenden, an avid lifelong fisherman who splits his time between his Grand Rapids studio and his home in Traverse City, last year’s pandemic gave him “a big window of time opportunity to create.”

Not only did that mean putting some final touches on the band project, but also working on a new solo record, “Too Chillay for Cats,” that he describes as “a Euro chill-out instrumental” album. It will be released under a pseudonym this fall or winter, he said.

As for the long-awaited Troll for Trout release – which also features lead and backing vocals from singer Tara Cleveland – it shapes up as everything that a fan would expect from a band that’s released fish-adorned albums with titles such as “Rancho Relaxo” (1998) and “Perfect Existence” (1995).

“It’s a collection of songs celebrating life,” he offered, “looking back, current and looking forward – a deeper look at our long-running theme of exploring the northern lifestyle.”

The July 23 edition of Local Spins on WYCE – which spotlights local and regional music at 11 a.m. Fridays on WYCE 88.1 FM and online at wyce.org – also featured new music by Cal in Red, Adam Jones, Libby DeCamp, Tobin Sprout, Seth Bernard, The Ryne Experience & .shi and Via Mardot, as well as songs from James Reeser & The Backseat Drivers and Ed Dupas (this week’s musician’s pick by Crittenden). Listen to the full radio show podcast here.