Iconic West Michigan musician Junior Valentine passed away March 1 at age 66, leaving behind a legacy of polished performances and musical mentoring. It was the No. 3 story of the year. 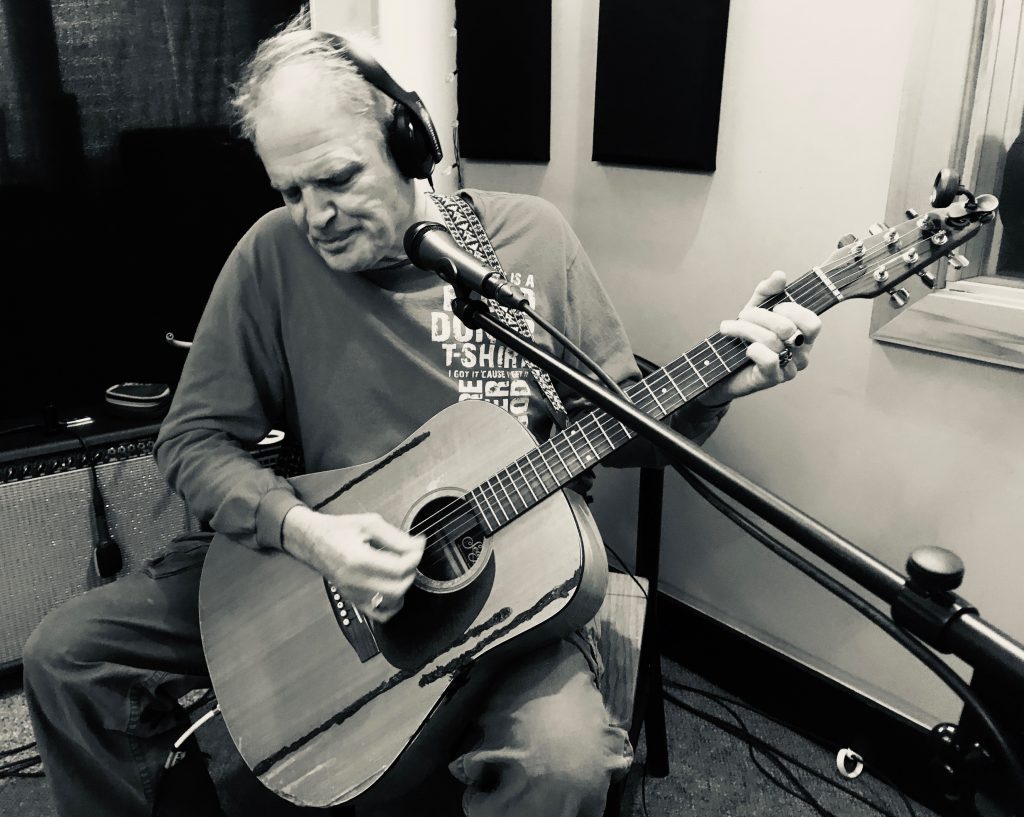 Generous With His Time, An Authority on the Blues: Junior Valentine (Photo/Local Spins)

EDITOR’S NOTE: West Michigan lost a true musical legend last spring when Junior Valentine passed away suddenly. His death led to an outpouring of memories from musicians and friends. Revisit the No. 3 story of the year at Local Spins.

Junior Valentine, 66, a widely respected Grand Rapids guitarist and singer with a penchant and passion for the blues, passed away Monday following a long illness and emotional struggles.

The frontman for Junior Valentine & The Allstars and member of Hank Mowery & The Hawktones was a mainstay amid the Grand Rapids music scene for nearly four decades, and a true authority on the blues genre.

Valentine – whose real name was Lawrence Meyering – was found by a neighbor, according to friends, and word spread Tuesday via social media. 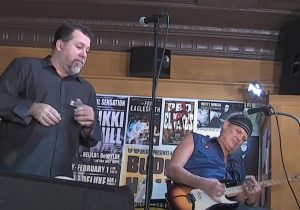 On Stage at the Tip Top: Hank Mowery with Junior Valentine in 2020. (Photo/Local Spins)

“He helped a lot of other musicians out, whether it was me or Johnny Bradley (who played bass for Gary Clark Jr. for many years) or David John or other guys who used to go sit in with him on Sunday night.”

A native of Grand Haven who grew up in Eastmanville and Greenville, Junior Valentine (aka Lawrence Meyering) played in various high school rock bands and officially launched his music career at age 27 inspired by Stevie Ray Vaughan among others.

He founded Junior Valentine & The Allstars and later also performed with Hank Mowery & The Hawktones, while recording several albums along the way and teaching guitar lessons.

While he “retired” from the music scene in 2015, he returned a few years later to play with the Allstars and Mowery. During the pandemic that shut down bars last year, Valentine even played live-stream fundraisers to support the Tip Top Deluxe Bar & Grill.

Valentine told Local Spins just last week that he was “isolating” and was “not well.”

An acquaintance said Valentine had been experiencing neurological problems, chronic fatigue and pain, with mood swings and a feeling “he’d done it all” in his career. 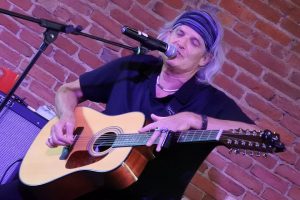 Memorial tributes and praise poured in from those who knew and performed with Valentine over the years.

“He was a true devotee of music,” said friend and musician Steven Doc Yankee. “It started with his love of the blues and swing music, and expanded out from there.

“A few years ago, Junior’s interests broadened it, and he’d call to talk about his latest musical find: musicians and different genres, such as world music. And he’d email me almost daily with new video music selections that I should hear, along with his observations and feelings of the songs.

“His energy and enthusiasm for listening to music and talking about it was contagious. As a bandmate, he was a natural generator of high energy, and really encouraged interplay between players. … He was very generous with his time.”

Said Ogie Dreyer: “He took me under his wing in 2014 and taught me to play the bass in the right way. … We’re losing so many, the circle is getting tight.”

Mark Sellers – “He gave me several private lessons on how to play blues guitar — 1990, when I was a young punk. I wasn’t good, at all — but he was very patient. I’ll always remember that.” 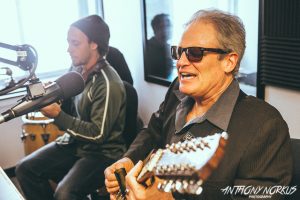 On the Air: Junior Valentine in the radio studio in 2014. (Photo/Anthony Norkus)

Jim Braun – “So sad to hear. I remember hearing him for the first time in the late ’80s at a bar in downtown GR. He had such a positive attitude on stage. Great command of his craft. He will be missed.”

Julie Bernat Swanson – “Really sad news for our musical community and beyond.”

Scott Stefanski – “Absolutely heartbroken to hear of my former bandleader Junior Valentine’s passing. He was always a funny guy with a deep love and respect of the blues, and American roots rock ‘n’ roll. He was notoriously tough on drummers, but was always great to me. You could never play too much ride with Jr.! I learned a heck of a lot from him and am glad we reconnected here on FB these past few years.”

Joe Rossi – “Junior was a fixture at the old Rhythm Kitchen and a very kind person as well.”

Jeff Mantia – “Lucky enough to have had him as a teacher for a few years in the ’90s. Infectiously enthusiastic about guitar techniques and the blues. Encyclopedic knowledge of blues/swing music history and it’s evolution. He will be missed.”

Craig Geers – “Very sad. Junior was always an amazing talent and so smooth, besides seeing him at many local venues in GR, he performed at a Gantos’ corporate office celebration party once and had everyone dancing, a really cool night!”

Jon Clifford – “I migrated to GR from Minneapolis in ’89. We met my second or third day living there. We became brothers almost immediately. A friendship that ran deep ever since. We pulled each other out of a lot over the years. Our love of music, world issues and most of all, humor, is the memory I will forever hold dear. He always had a joke in his back pocket to close out every conversation we had. A really bad joke. The worse it was, the louder we laughed. I love you Junior. Always will.”

Scott Diekman – “Sure was a cool friend to have. The last time I was with him, he signed a stage guitar he had used all the time. I bought it from him and with his blessing, put all the guts into another new build. Godspeed, brother.” 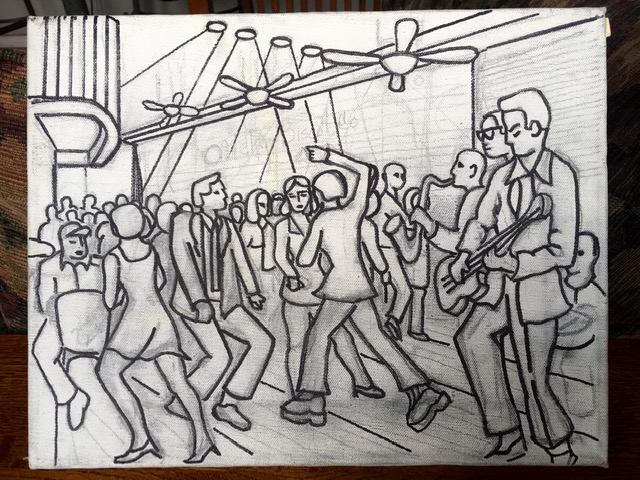 Rhythm Kitchen Memories: This drawing of Junior Valentine & The Allstars was created by Jim Starkey. 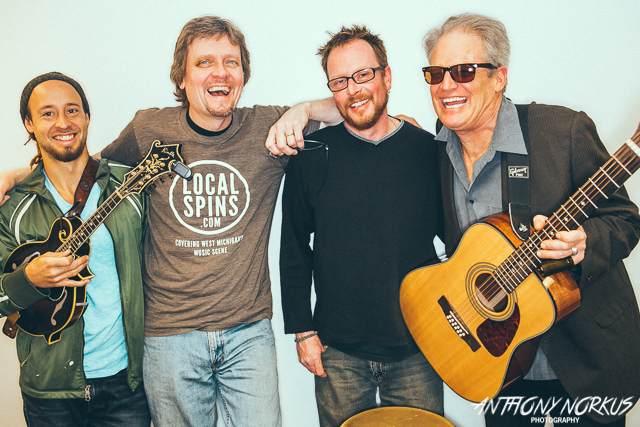