From jazz to rock to funk to country, it’s a busy week that also features Ganja White Night, Enter the Haggis, The Moxie Strings, Unknown Hinson, Freekbass, the Diatribe’s Grand Showcase and more. . 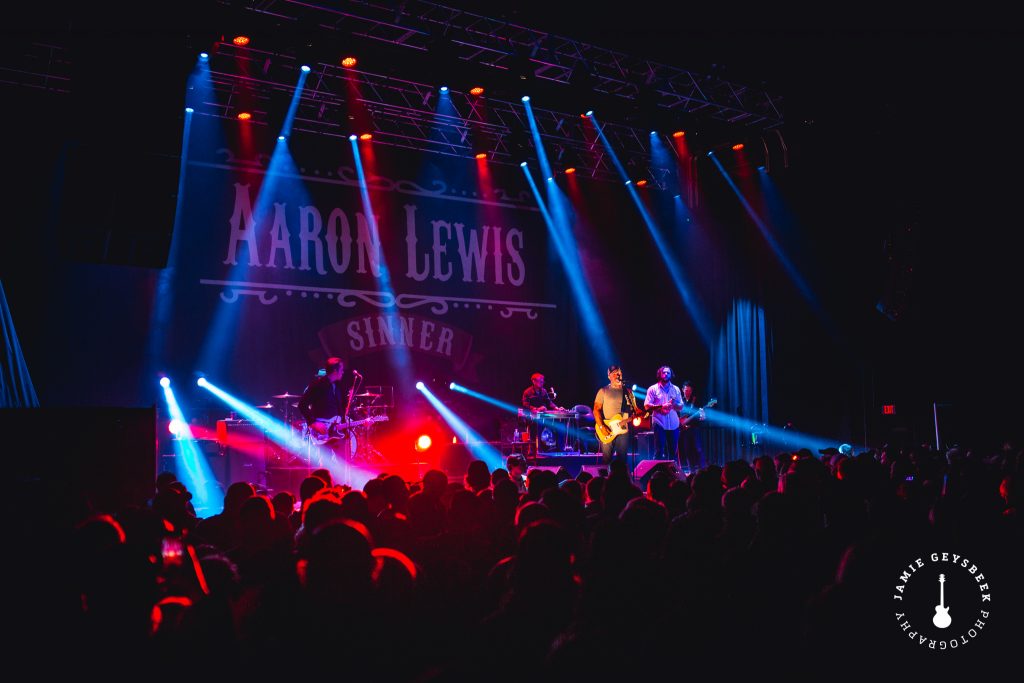 Back in GR: Aaron Lewis brings his tour to West Michigan this week. (Photo/Jamie Geysbeek) 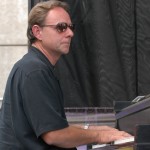 Doors open at 6 p.m. Gumbo or soup is available, served with salad and bread, or hot dogs and chips. (The price is reduced by $5 for those who only attend the concert.) 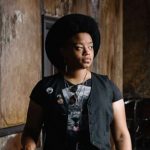 Singer-songwriter Amythyst Kiah is a Chattanooga native who delivers Americana, roots, alt-country, R&B and folk with a powerful and moving voice, something evident on a new song, “Wild Turkey,” she had filmed for a live video in New York earlier this year. She also has collaborated with Rhiannon Giddens, Leyla McCalla and Allison Russell on the “Our Native Daughters” project.

Get tickets and details online at listeningroomgr.com. 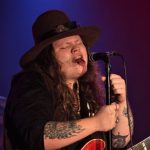 Hailing from South Carolina, guitarist and singer Marcus King wasted little time making a splash as a teenager. Now in his early 20s, King and his band continue to cultivate a devoted legion of fans with their soulful and psychedelic Southern rock and blues. And King is slated to release his debut solo album, “El Dorado,” in January – a record produced by The Black Keys’ Dan Auerbach.

The band brings its “El Dorado” tour to Grand Rapids, with an opening set by Aaron Lee Tasjan. Doors for this all-ages show open at 7 p.m. Get tickets and details here. Check out a 2018 Local Spins interview with Marcus King here: Marcus King gaining international respect, ready to ‘knock the door down’ with soulful, guitar-driven fire 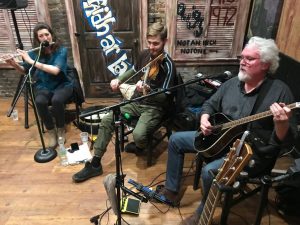 Peat in the Creel (Photo/John Sinkevics)

Local Spins Wednesdays are presented by Local Spins, SpeakEZ Lounge, North Coast Guitar Company and WYCE, with Michigan beer specials on tap and free parking in the city lot kitty-corner from SpeakEZ just to the south on Monroe Avenue NW or in the Sixth Street Park lot to the north (plus street parking). By the way, Pete Kehoe returns to SpeakEZ for a special Friday night show. 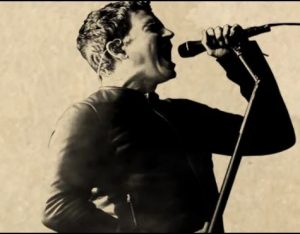 Soaring to pop-hued alt-rock fame in the late 1990s, Third Eye Blind (led by Stephan Jenkins) continues to tour and record, and the California band rolls into Grand Rapids this week to promote its new album, “Screamer,” which was released in October.

Smallpools will get things started on Thursday. Get tickets here. 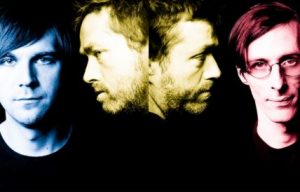 The 2017 album from Kansas City indie-rock band The Life & Times has been described as “a sun and drug-dappled beauty, infused with a thick sonic kaleidoscope of tones.” The group brings its U.S. tour to West Michigan, with Grand Rapids’ own Charles the Osprey and Blisshead filling out the bill.

Doors open at 7 p.m. for this all-ages show. Get details at pyramidschemebar.com, where you can also get the lowdown on Friday’s show featuring Last Night Saved My Life, Gold Route and more, $10 advance, $12 day of show. 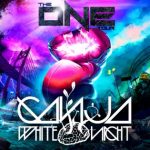 Belgian electronic music duo Ganja White Night returns to Grand Rapids, this time on “The One Tour” promoting the group’s latest album. The dubstep/hip hop act will be joined for the night by Boogie T, Jantsen and SubDocta.

Doors open at 8 p.m. for this 17-and-older show. Get tickets and details at sectionlive.com. 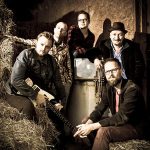 For more than two decades, Toronto’s Enter the Haggis has regaled uber-devoted followers with rock-hued Celtic strains. The band founded by Craig Downie (who was born in Scotland and raised in Canada) has released eight studio albums over the years. The band follows this Kalamazoo show with stops at The Ark in Ann Arbor and State Theatre in Bay City.

Get tickets for Thursday’s show online at bellsbeer.com. 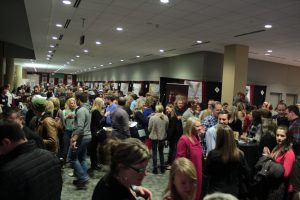 WINE, BEER & FOOD FESTIVAL TICKET GIVEAWAY: Congratulations to Local Spins readers Kyle Reidsma and Diane Atanasoff. They were the first two people to email john@localspins.com with “WINE, BEER & FOOD” in the message field and wona pair of one-day tickets to the Wine, Beer & Food Festival at DeVos Place. Check The Big List every week for your chance to win concert tickets.

Back for a 12th year and continuing to grow: The International Wine, Beer & Food Festival boasts more than 1,500 wines, beers, ciders and spirits from across the globe, as well as savory food samples from area restaurants.

The event also presents stellar live music, with The Vineyard stage featuring Blushing Monk on Thursday, Third Coast Gypsy Jazz on Friday and A League of Our Own on Saturday. The Beer City Music Station stage will present The Jake & Jimmy Band on Thursday and Friday, with Valentiger performing on Saturday. The Grand Gallery, meanwhile, will host solo artists: Jake Stevens on Thursday, Alistair Beerens on Friday, and Mark Sala and Brandon Ward on Saturday. Get more info online at showspan.com. 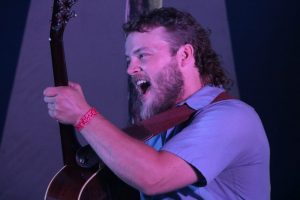 This Listening Room show pairs a couple of West Michigan favorites representing widely disparate genres. Resonator guitar/Dobro wizard Mark “Huggy Bear” Lavengood first made his mark as a member of Lindsay Lou & The Flatbellys, but has since leapt forward with a solo career, surrounding himself with some of Michigan’s finest bluegrass players.

Earth Radio, meanwhile, won Local Spins’ “Emerging Artist of the Year” honors with a progressive neo-soul sound that’s as unique as any band in the state. Doors open at 6 p.m. for this show. Get tickets here. Lavengood also plays a special “Dobro night” at Salt of the Earth on Sunday. Details in Under-the-Radar Picks below. 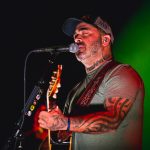 Talk about a successful career change. Formerly the lead singer for alt-metal band Staind, Aaron Lewis has prospered as a country singer since releasing “The Road” back in 2012. All three of his country albums have cracked the Top 30 and he’s released three singles from his latest album, “State I’m In,” which came out in April.

Ben Danaher will open the B93-sponsored Grand Rapids show. Get tickets and details online at 20monroelive.com. 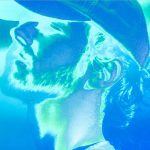 French electronic music producer Madeon (Hugo Pierre Leclercq) – who first got attention for a YouTube mashup of different popular songs – released his second studio album, “Good Faith,” last week via Columbia Records. The mix of “french house,” electropop and gospel has proven to be a popular formula for the artist.

Doors open at 8 p.m. for this 16-and-older show. Also on the bill: Ford. Get details online here. By the way, Mersiv, Super Future, Dissonance and The Bass Brothers light up Elevation downstairs the same night, $18 advance, $20 day of show.

DJ SuperDre will also perform at this special event in which all proceeds benefit the nonprofit Diatribe, which empowers young people through the performing arts and raises awareness of social issues. Get tickets for the event online here. 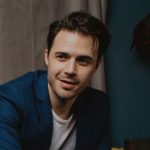 This is billed as “An Evening with Kris Allen,” and it promises to be a special one featuring the singer who won the eighth season of “American Idol.” Since then, the Arkansas native has released five albums, with his self-titled 2009 recording peaking at No. 11 on the Billboard 200 chart. He recently released, “10,” consisting of reworked songs from his previous albums.

Get tickets online at listeningroomgr.com. 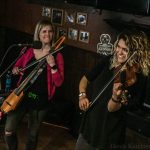 Michigan’s The Moxie Strings have fashioned an impressive career, bringing an ever-entertaining, string-based mix of Celtic music, Americana, classical and prog-rock to stages across the Midwest. Diana Ladio and Alison Lynn are virtuosos on fiddle and electric cello who offer not only high-energy performances, but an engaging and educational stage presence. They recently completed their first tour of Ireland.

Get tickets and details online at sevenstepsup.com. 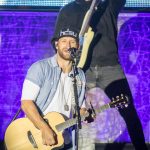 Country star and North Carolina native Chase Rice has topped the charts since bursting onto the scene in 2010. His most recent album, 2017’s “Lambs & Lions,” spawned the No. 1 country airplay single “Eyes on You.” He brings his U.S. tour to Grand Rapids, with Cale Dodds and Hunter Phelps also on the bill.

The show is nearly sold out, but some stray tickets remained early this week. Get info online at 20monroelive.com. 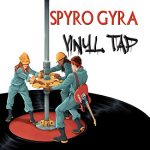 The band has sold more than 10 million records over the years, releasing the most recent album, “Vinyl Tap,” earlier this year, featuring jazz covers of vinyl-era pop hits. Get more information online at sc4a.org. 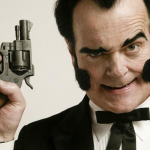 Yes, he’s the voice of Early Cuyler on “Squidbillies.” But North Carolina’s Stuart Daniel Baker, aka Unknown Hinson, is also singer, songwriter, comedian and performer who’s shared stages with the likes of rockabilly and country stars The Reverend Horton Heat, Marty Stuart and others — all while churning out “hilariously politically incorrect songs” with an “outrageous and campy, white-trash persona and freewheeling, sleazy tone.” 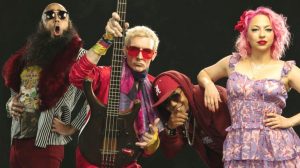 Freekbass is, well, freakish when it comes playing the bass – and unleashing a funk music party unlike any other. He returns to Founders with much-ballyhooed bass prowess, bringing his band, The Bump Assembly, along to ensure “danceable, infectious grooves.” Sammi Garett from Turkuaz is part of the lineup.

Get more info online at foundersbrewing.com, where you can also get details about Thursday’s free show starring another funk fave: The Main Squeeze (with Dizgo also on the bill). 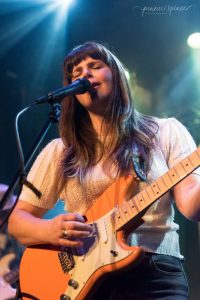 Welcome to the first “Songtellers Stories & Songs” show at the new Listening Room. Hosted and created by GR singer-songwriter Nicholas James Thomasma, the Sunday series moves from Creston Brewery to the Listening Room, with regional artists sharing their songs and the stories behind them.

The first episode features West Michigan native (and Missouri-based) artist Beth Bombara and The Crane Wives drummer Dan Rickabus, who has released a solo album and often performs on his own and with other musicians. Future “Songtellers” shows will take place on the last Sunday of the month through April. Get tickets here. 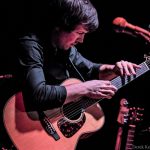 St. Joe Jack playing Rockford Brewing in Rockford, 7:30 p.m. Wednesday, free – St. Joseph’s Jack Adams is on a mission: playing 100 Michigan breweries in 100 days, and he’s about halfway through. Check out his one-man show this week at Rockford Brewing and come back to Local Spins later this week for a feature story on this amazing project. BTW, Rockford Brewing follows this on Thursday with Jim Spalink, on Saturday with the Devil Elvis rockabilly show, and on Sunday with The Soods, The Zells and Cole Hansen. 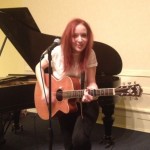 Raise the Woof with Melissa Dylan at The Stache inside The Intersection, 6:30 p.m. Friday, $20 – This fundraiser for the Hearts of Hope Dog Rescue will feature live music by Melissa Dylan and Tyler Kuiper, a raffle, a silent auction and a chance for attendees to see rescue dogs “strutting their stuff” on the red carpet. Details online here. 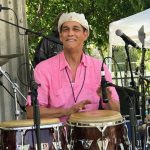 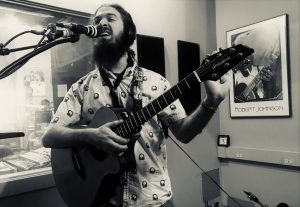 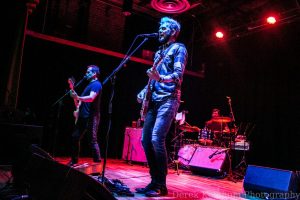