For the first time since the pre-COVID days of 2019, the beloved Michigan festival revs up next weekend with revered touring acts and Michigan stars. The preview and a schedule at Local Spins. Having attended countless editions of the renowned Michigan music festival over the years – and getting a chance to play the event this year with his band for the first time in nearly a decade – Nelson has even used a fond Wheatland memory as inspiration for one of his favorite songs.

“I was lucky enough to write my song, ‘True and Fine’ at Wheatland,” Nelson recalls.

“In the musicians’ campground there is a streetlight on a pole on a dirt two-track. I watched in the early morning glow, a group of musicians in a circle with a bigger circle of spectators surrounding them. They started playing a waltz and couples spun out into the street dancing. It was one of the most beautiful things I’ve ever seen. That’s where that song came from.” Indeed, some of the most magical moments at this much-beloved folk and roots music festival that commemorates its 49th anniversary outside Remus next weekend take place off-stage – around campfires and at late-night jam sessions.

Many cite the traditional Sunday morning gospel hour as a can’t miss gem, even Nelson, who’s a Buddhist.

“My absolute favorite every year is getting to be a part of the Gospel Sing on Sunday mornings. That’s a funny thing for a Buddhist but it’s the music I grew up with and it is still so close in my heart,” he says.

“Wheatland for me is like a family gathering. Some of the best parts of the festival happen backstage for sure.”

But make no mistake, the festival rolling out Friday through Sunday for the first time since 2019 due to the COVID pandemic also boasts the usual ultra-talented internationally acclaimed stars, from the Cajun-propelled Racines to fiddler Eileen Ivers and bluegrass powerhouse Blue Highway to bluesman Joe Louis Walker and Western swing favorites Big Sandy & His Fly-Rite Boys to old-school a cappella group Northern Kentucky Brotherhood and Michigan bred vocal super-group The Sweet Water Warblers. MICHIGAN MUSICIANS PIPE IN ON WHAT MAKES WHEATLAND MAGICAL

Local Spins asked a few of them what makes Wheatland such a treasure:

Kait Rose (Kalamazoo singer-songwriter) – “Being a part of the virtual festival two years ago in the middle of the pandemic was great, but performing there in person is on my bucket list. I’m thrilled. I’ll be playing solo, songs from the new album, maybe with a special guest or two. Wheatland has always been on a pedestal, a holy grail. I’ve always aspired to be considered as a worthy participant, since I was 15.” 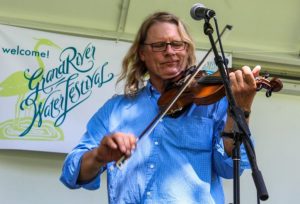 Bruce Ling (Hawks & Owls String Band) – “Hawks & Owls String Band is deeply honored to be the opening band on the Centennial Stage (6 p.m. Friday), setting the vibe for this much-beloved music festival after a two year shutdown due to COVID. What stands out for me is the powerful sense of community that is evident at Wheatland, more so than many others. The music, internationally traditional, has a lot to do with that. As well, I love that there is something for every age. There’s Kid’s Hill with kids’ performers, activities, their own very cool stage, an open-mic for kids, all sorts of things to stimulate those creative young minds. Middle Ground is for teenagers: a way to engage your creative side in a safe and nonjudgmental environment. These teenagers have their own stage for open-mics and performances, and so much more. There’s also the Elyce Fishman Scholarship Fund to support bright and talented younger musicians with lesson funding if they are interested in learning about Traditional American Music, fiddle tunes, old songs, sources for the music, and the history of this music. I’m recognized as carrier of “oral tradition,” the passage of music and its history from older to younger generations, and as such I receive funding for those music students of mine that I think will carry on what I’ve learned from my mentors and research in the Library of Congress, old recordings, and such.” 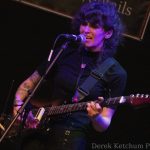 Olivia Mainville (Via Mardot) – “I’m looking forward to Wheatland. We’ll be performing as a four-piece and busting out the theremin and baritone for our set along with some new instrumentals (at 9:40 p.m. Friday on the Centennial Stage). A wonderful family I babysat for invited me to come with them to Wheatland when I was a teen. Wheatland was my first music festival and it was a shock to see how accepting and kind everyone was. Wheatland made me feel accepted unlike the schools in Holland, so Wheatland really boosted my teenage confidence and it stuck with me.”

View the Main Stage schedule below and find the complete schedules for all stages and more information online at wheatlandmusic.org. Although online ticket sales for the festival have ended, you can call the office at 989-967-8879 or 989-967-8561 to inquire about ticket availability.