Encouragement To People ‘To Not Give Up’: John Cooper and Skillet. (Courtesy Photo)

“We were coming in and out for that one ‘cuz we were on tour,” he said of the two-day festival at Belknap Park. “There were so many great bands and we got to watch some play. And we had a great turnout of people who were singing our songs with us.”

Skillet returns to West Michigan to headline the Winter Jam tour of Christian music artists, which stops at Van Andel Arena at 7 p.m. Friday (Feb. 18). The timing coincides with the release of the band’s new album, “Dominion.”

Cooper, 45, says the new collection is “dripping with positivity” in its lyrical approach.

“Coming out of this pandemic, we’re not gonna let this thing rule our lives,” he stated. “There are things on the outside I can’t control, but I do have some control over my heart and my mind. It’s an encouragement to people not to give up.”

Songs such as “Surviving the Game” and “Refuge” rock hard with their upbeat message.

“I think this record sounds heavier, more of an in-your-face (thing). It’s very big on the bottom end,” said the bass player. He compares the sounds of the title track to something from Shinedown or “really heavy Muse,” he suggested.

Cooper has led Skillet from its 1990s start as a faith-based band playing to faith-based audiences to a mainstream music force with platinum-selling albums, rock radio airplay and millions of hits on streaming platforms: all without leaving its Christian music fans behind.

The “Dominion” album is Skillet’s sixth straight to debut in the top 40 of Billboard’s all-genre weekly sales chart. Cooper hopes the new music will add to their total of 6.5 million monthly Spotify listeners.

Cooper has long been theologically conservative and even starred in a four-part video series for the Focus on the Family organization. And while refraining from endorsing political candidates, he has taken a controversial stance against COVID vaccine mandates.

Indeed, the 40-city Winter Jam tour has avoided arenas which have a proof of vaccination policy for admission.

“That kind of talk has angered some people, but I don’t regret saying it,” he noted. “I’ve never been against the vaccine; I just don’t like the mandates.”

A recent appearance on TV’s “Fox & Friends” gave Cooper a chance not only to share his concerns about free speech and cancel culture, but also to promote the new album. 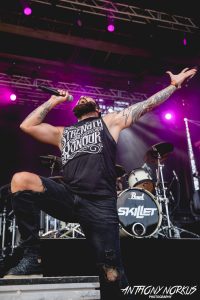 Meanwhile, Skillet continues to stake a claim on mainstream platforms. The band has played shows with Breaking Benjamin, Puddle of Mud and Seether. In 2017 Skillet opened on a tour with Korn and Stone Sour.

Skillet’s 2009 anthem, “Monster,” lived up to its name with a multi-platinum designation and dominance on various sales charts. More than a dozen years later, it has amassing 4 billion global audio streams.

Nevertheless, Cooper is still surprised at their inroads.

“When I met Five Finger (Death Punch) and found out they knew who I was, I was kinda stunned,” he offered. “I really think it’s because of the groundswell of grassroots fan support Skillet has. I get random texts from bands. It’s amazing how many Skillet shirts show up at, say, a Slipknot show.”

In addition to Skillet, Winter Jam 2022 features Tauren Wells, Colton Dixon, KB, NewSong and I Am They, with pre-show artists Abby Robertson and Bayside Worship, plus speaker Shane Pruitt.

The “pre-Jam party” starts at 6 p.m., with the show officially beginning at 7 p.m. General admission is $10 at the door, cash only. More details online here.