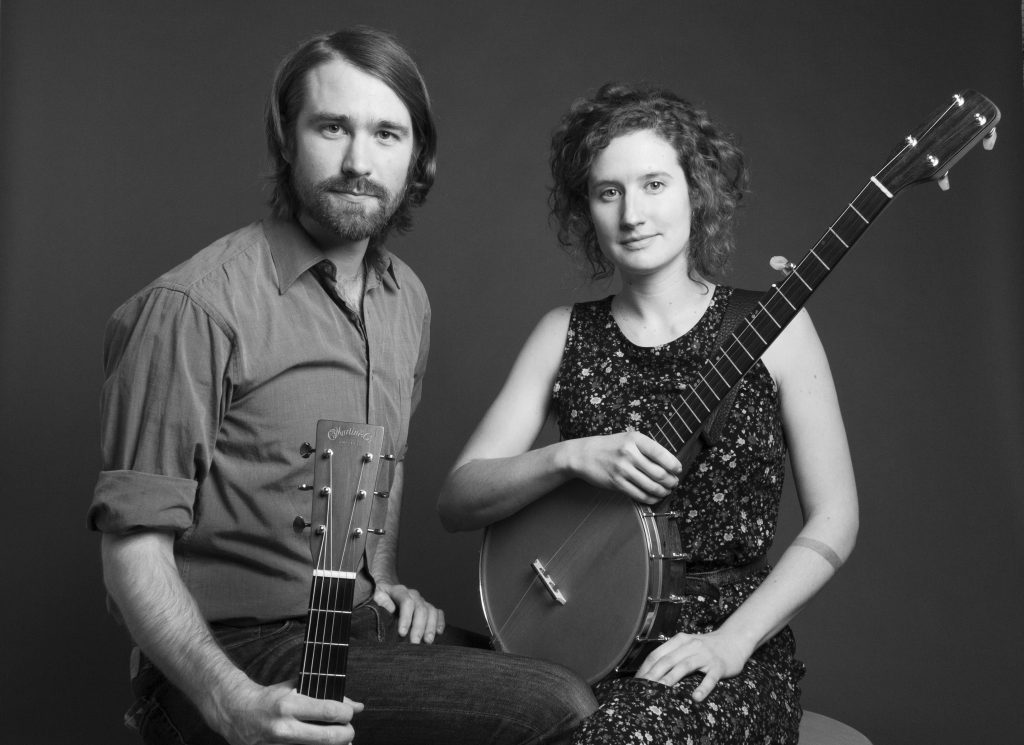 THE BAND: Red Tail Ring
THE MUSIC: Indie-folk, aka “old-time roots, new-time sounds”
WHERE YOU CAN SEE THE DUO: 1 p.m. Saturday at Earthwork Harvest Gathering outside Lake City; 8 p.m. Oct. 7 at Seven Steps Up in Spring Lake; 8:30 p.m. Oct. 8 at Short’s Brewing in Bellaire; 7 p.m. Oct. 9 at The Old Art Building in Leland

SCROLL DOWN FOR VIDEOS AND PODCAST

Red Tail Ring doesn’t just pay homage to vintage folk and roots music: The Kalamazoo duo breathes new life into it, channeling the power and charm of seminal material into its own original songs.

That approach has never been more evident than on Red Tail Ring’s latest album, “Fall Away Blues.” 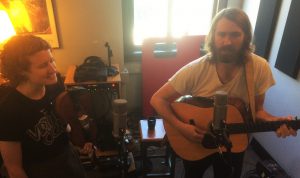 “We were really excited to kind of interact with old music in terms of writing new words to old melodies, or with reimagining old ballads,” said Michael Beauchamp. “The album is mostly original, but it has a streak, even more so than our previous recordings, of being informed by old music, and using old music as a basis for writing.”

It’s something the duo references on the song, “A Ghost Whispers,” from the new album released earlier this month: “When I sleep, a ghost whispers; when I eat, a ghost hungers; when I need, a ghost wonders what it’s like to be fed on the past … “

It was recorded with “no guests” and “almost no overdubs” – just a “straight duo record.”

‘LESS AFRAID OF THE SMALL LINES’ THAT SEPARATE GENRES

That alone speaks to the growing confidence of these University of Michigan grads who began performing together in 2009 and have since released several highly lauded recordings and toured the globe. 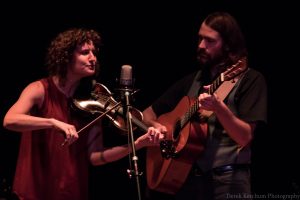 “I think we’ve gotten less afraid of variety, less afraid of the small lines that separate different genres. For instance, on this album, we explore the blues, country blues, and in general, use the concept of the blues to approach much of the album,” Beauchamp said.

“The more we play music, the less interested we are to fit into someone else’s little box, or to do what some arbitrary gig demands. We just want to play our music, without reservations.”

That has served the duo well as it cultivates a growing audience for its tender, harmony-laden and oft-melancholy songs – something Beauchamp describes as “intimate, careful, quiet” music. 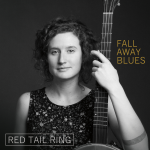 Premo, 28, and Beauchamp, 34, have been unveiling the new album in a series of appearances across the Midwest, including this weekend’s Earthwork Harvest Gathering outside Lake City (performing at 1 p.m. Saturday) and an Oct. 7 concert at the Seven Steps Up listening room in Spring Lake.

The duo stopped by the studios of WYCE-FM for this week’s edition of Local Spins on WYCE to talk about the new project and perform the songs, “Fall Away Blues” and “Love of the City,” on the air. Listen to the podcast here, with a video of “Fall Away Blues” — and the official video for “A Ghost Whispers” — below.

Over the years, Premo and Beauchamp, part of the Earthwork Music collective, also have created solo works and collaborated with other Michigan artists, including Chris Bathgate, May Erlewine and Orpheum Bell.

“Musicians across all kinds of scenes and genres support one another, which is what makes it such a great place to make music,” he said.

Get more information and purchase the new album online at redtailring.com.

This week’s episode of Local Spins on WYCE also featured the debut of a couple of new live tracks — from the Public Access super-group and from rock-pop’s The Outer Vibe – as well as music by Madcat Midnight Blues Journey, The Red Sea Pedestrians, Michael Robertson, The Weatherheads and The Jukejoint Handmedowns.

Next week: Tune in at 11 a.m. Sept. 23 at 88.1 FM or online at wyce.org when Jessica in the Rainbow and Maddie Jackson will talk about Ladyfest on the Lakeshore and perform in-studio.