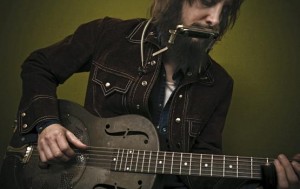 Kurt Marschke has linked up with a longtime pal and bassist to form a new rendition of the Deadstring Brothers.

The Deadstring Brothers are back.

Not that this alt-country, “Exile on Main Street”-styled rock outfit born in the Detroit area was ever actually gone, it’s just that frontman Kurt Marschke put the full-band thing on hold for awhile as he pursued a one-man “Deadstring Brother” act while working on a solo album.

But then he got a call from bassist and longtime buddy Jeremy Mackinder, who had recently left the honky-tonkin’ Michigan band Whitey Morgan & the 78s.

“He was the catalyst for me putting the band back together,” Marschke told me in a recent phone interview from the road, noting his close friend also is a talented booking agent who booked Whitey Morgan for seven years. “Now, he’s a Deadstring Brother. “

The rebirthing of a band is no short order. – Marschke

That means putting the solo project on hold, recording a new band record in September, and gearing up for up to 200 gigs on the road as a band in 2013.

After experiencing the frustration of managing rotating touring lineups of the Deadstring Brothers in the past, Marschke said he’s thrilled to have a core band to tour with again (while adding pedal steel and keyboard players as needed).

“The rebirthing of a band is no short order,” said Marschke, who estimates the new version of the Deadstring Brothers will play about 40 dates the rest of 2012, including Thursday’s first-ever stop at Grand Rapids’ Tip Top Deluxe Bar & Grill. 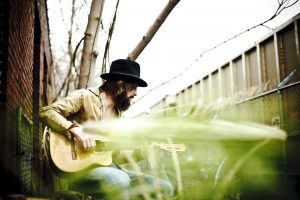 Marschke has plans for a new Deadstring Brothers album and heavy touring in 2013.

“We’re going to go out a little lean. We’ll have to build that whole thing back up. But we’ve got time and nothing but road dates ahead of us.”

It’s the latest episode in the up-and-down trajectory of a country-hued rock band that’s as unique as any with roots in the Detroit area. Formed in 2003, and inspired by bands such as The Volebeats, Marschke and the Deadstring Brothers earned acclaim and made their mark with songs that often hinted at the country personality of the Rolling Stones.

As one fan put it on YouTube, the band is “criminally under-rated.”

“We had developed something that really hadn’t existed before … as the scene for that kind of music in the Detroit area,” Marschke noted.

Grand Rapids singer-songwriter Nathan Kalish, who actually played on tour with the Deadstring Brothers, called Marschke “the most inclusive guy” he’s ever met — a hard-working guitarist and an exceptional songwriter. “Everyone who has ever enjoyed a Rolling Stones song should check out Deadstring Brothers, not because it’s exactly a replica, (but) because it’s an extension of that spirit of roots music,” Kalish said.

Marschke moved to Nashville from the Detroit area in 2010, inspired by the hard-working attitude of Nashville’s musicians and seeking a more centrally located home base from which to tour. But he still has family in Michigan and plays the state at least three times a year.

“Nashville is the busiest place I know. I really like the full-time, the real committal aspect of all the musicians I met. They were so committed to what they were doing,” he said. “I love Detroit. There was no personal reason for leaving Michigan. I just wanted to throw myself into something that was different.”

Now, with Mackinder on hand to help book shows, Marschke is throwing himself into work on a 24-month game plan to let fans knows the Deadstring Brothers are back.

“Tackling America is a whole different ballgame. If you back off, you’re starting all over again,” he conceded. “For the most part, it’s going out and letting people know it’s still alive.”