“Rocket Man” and “Space Oddity” certainly are appropriate song selections to commemorate the 50th anniversary of the lunar landing. But there are also some hidden gems in this Local Spins playlist. 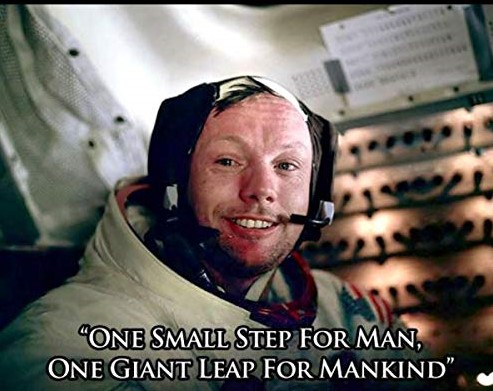 Man on the Moon: NASA released lunar recordings a few years ago.

It’s all about the moon these days.

The 50th anniversary of the historic lunar landing during the Apollo 11 mission has television and media outlets everywhere revisiting the Eagle’s landing on the moon and Neil Armstrong’s boots kicking up lunar dust for the first time.

Those of us old enough to have witnessed the fuzzy images live on TV certainly remember the wide-eyed, could-this-really-be-happening fascination with the milestone event.

So, of course, this gives Local Spins an excuse to fashion a soundtrack for the anniversary — Tuesday marked the 50th anniversary of Apollo 11’s takeoff, Saturday marks the anniversary of the lunar landing — with everything from the obvious and expected (David Bowie, Elton John) to the new and unusual.

Watch the videos, scroll down for the Spotify Top 10 playlist.

MEN ON THE MOON: The Local Spins Playlist

1. David Bowie, “Space Oddity” (1969) – Let’s start with some of the most obvious and iconic rock songs that apply to the whole astronaut-alone-out-in-space thing. Nothing describes the isolation better than this David Bowie gem from the late 1960s. The line, “Ground control to Major Tom,” is a phrase that’s stood the popular culture test of time.

2. The Grateful Dead, “Standing on the Moon” (1989/2000) – This song is about much more than the view from the craters of the moon. It says a lot about the sad state of global affairs, in an anthemic way.

3. Elton John, “Rocket Man” (1972) – This builds on the theme of “Space Oddity” above, but in more dynamic, pop-laced rock fashion with one of Elton John and Bernie Taupin’s most memorable, most poignant and most enduring hits.

4. R.E.M., “Man on the Moon” (1992) – It’s a twist on the whole “did they really film this whole thing on a movie set” in tribute to moon-struck comedian/actor Andy Kaufman. But “if you believe they put a man on the moon” … this song is still pretty cool.

6. Beach House, “Space Song” (2015) – And while you’re in an electronic-hued mood, there’s nothing like Beach House to make you feel like you’re actually floating in space.

7. Kacey Musgraves, “Space Cowboy” (2018) – This actually has nothing to do with astronauts, except that they’re cowboys with lots of space between them and fellow Earthlings. Personally, I just think it’s a groovier tune than Steve Miller’s “Space Cowboy.” Sorry.

8. The Amoeba People, “One Giant Leap” (2019) – If you’ve never heard this goofy rock band, this is a fun place to start. This new single turns Neil Armstrong’s famous utterance and the whole lunar voyage into a hilarious slice of “science rock from the Planet Crouton.”

9. NASA, “Apollo 11-2” (2011) – Nope, this isn’t music. This track is part of the actual radio transmissions from the moon in 1969, with the report that “The Eagle has landed” earning this response from ground control: “You’ve got a bunch of guys about to turn blue. We’re breathing again.” Historic stuff. (Another NASA album, “We Came in Peace for All Mankind,” also covers this territory.)

10. Pink Floyd, “Eclipse” (1973) – It would be silly not to include something from “Dark Side of the Moon” and this closing track is epic in its own very brief way. (For full effect, I’d highly recommend listening to the entire album, of course.) It all ends with the memorable final spoken lines: “There’s no dark side of the moon really. Matter of fact, it’s all dark.” Hmm.

MEN ON THE MOON: The Local Spins Playlist on Spotify