The North Carolina indie-folk group made its Meijer Gardens debut on Wednesday, touring behind its latest studio album. Check out the review, plus a Local Spins Q&A with the band. 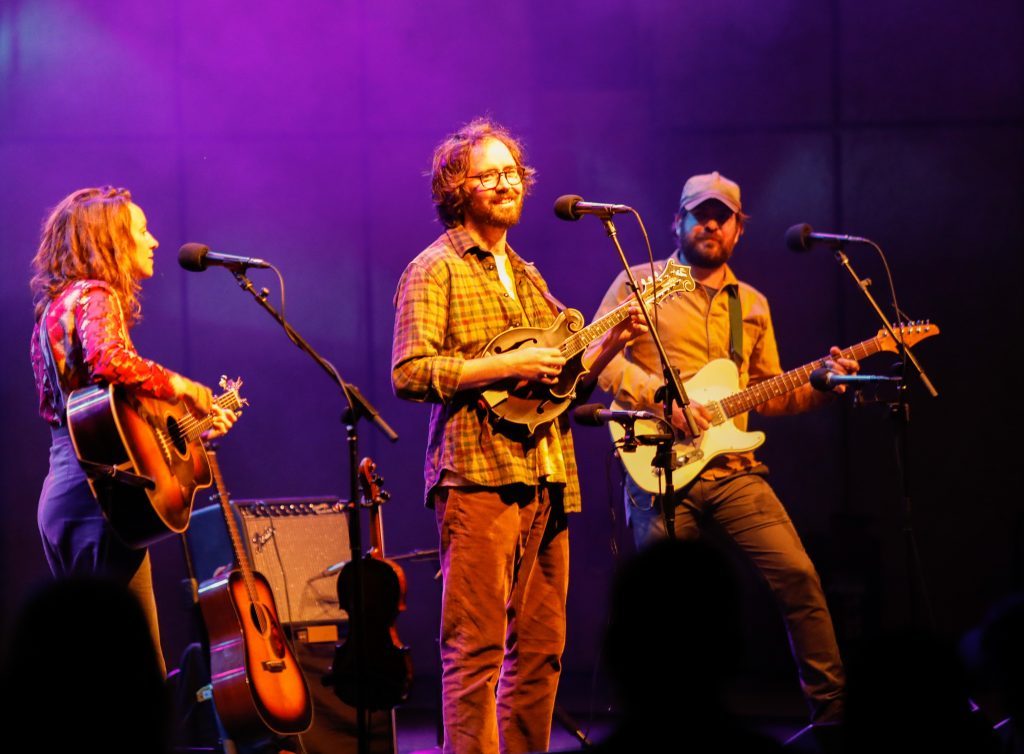 SCROLL DOWN FOR PHOTO GALLERY AND Q&A WITH THE BAND

On the most autumn-like evening of the summer, Mandolin Orange gave a performance as subtle and vibrant as a gentle wind whispering through golden leaves.

In the midst of a whirlwind summer tour and a freshly squeezed NPR Tiny Desk Concert, the duo stopped at Grand Rapids to make their Frederik Meijer Gardens & Sculpture Park debut, which included a magical opening set by Bonny Light Horseman, a charming and talented three-piece that performed a flawless set.

(Mandolin Orange also took some time this week to talk with Local Spins about their musical journey, ice cream and returning to Grand Rapids. Scroll down to read the Q&A with Emily Frantz below.)

Easing gently into the set, musical couple (and married couple) Emily Frantz and Andrew Marlin — backed by a full band including upright bass, drums and additional guitar — performed with the same nuance and restraint that is deeply ingrained in their music. 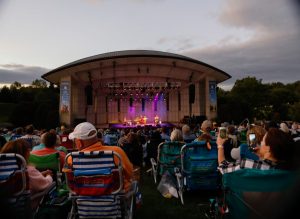 “The Wolves” was a somber yet groovy tune that grew into a bluesy number. At its most intense, Marlin strummed a driving mandolin rhythm while a groovy guitar solo danced against the longing refrain.

“There Was a Time” provided a wistful framework fit for reminiscing of lost love. Marlin took a few solo passes near the song’s conclusion, brandishing his impressive chops.

Perhaps it was the spell of cool air or the hypnotic trance inspired by a captivating set, but the crowd barely stirred, even keeping chatter at an impressive minimum. There was, however, a flurry of cheers and a blanket of applause at the start of “Golden Embers,” a favorite from the band’s most recent release, “Tides of a Teardrop.” Tasteful touches included a half-time breakdown and the slightest kiss of reverb on the snare drum (one of the many masterful techniques employed by the evening’s dazzling sound engineers).

“Time We Made Time,” saw the drummer and bassist pull a few tricks from their sleeves, including a percussive instrument made of goat toes and upright bass harmonics akin to a colony of seagulls.

Other highlights of the evening included a duo performance of “Mother Deer,” and a rocking rendition of “Take This Heart of Gold.” The evening concluded with a two-song encore rounded out by “Waltz about Whiskey,” a spirit-soaked number that proved perfect for singing along with the outstretched silhouette of a raised glass. 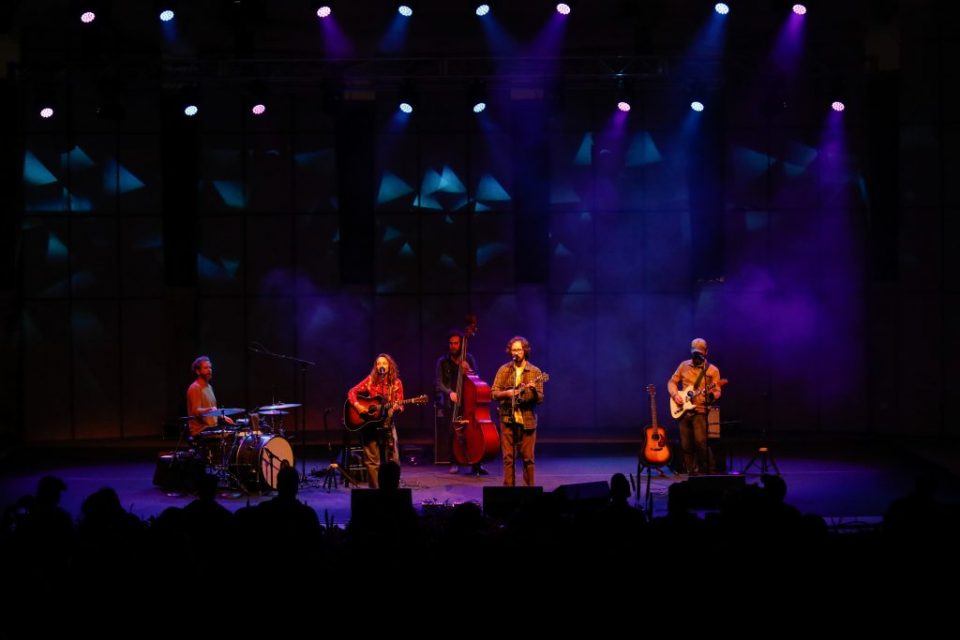 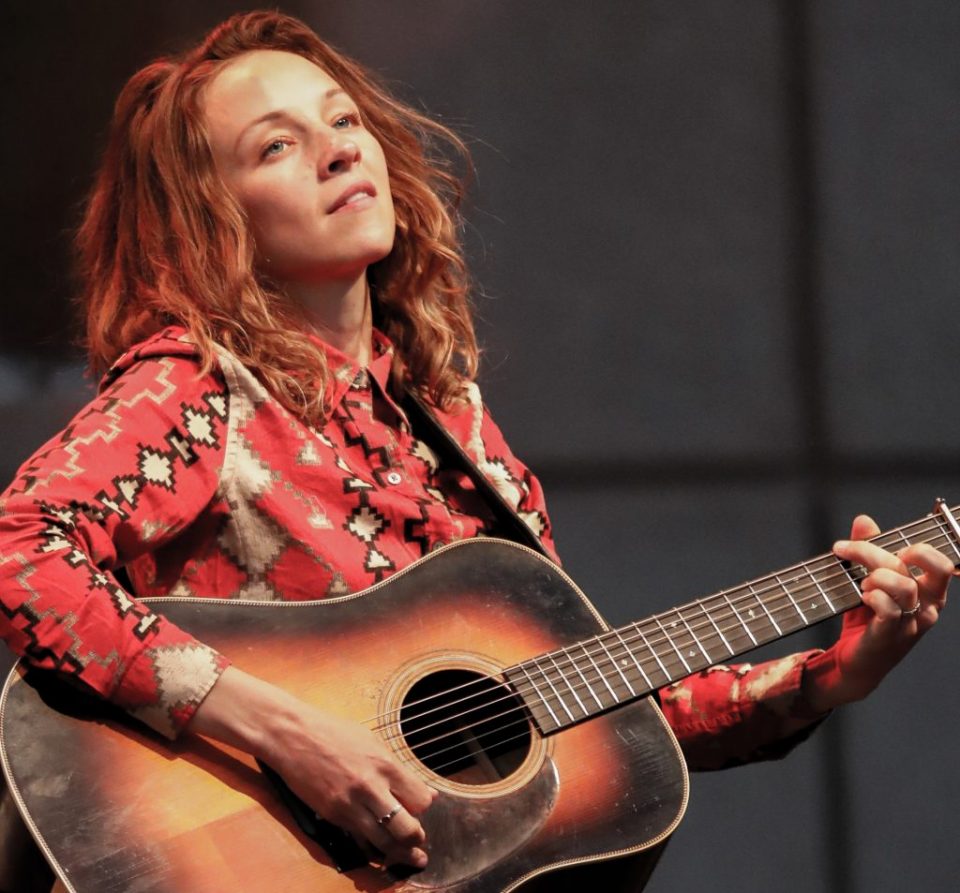 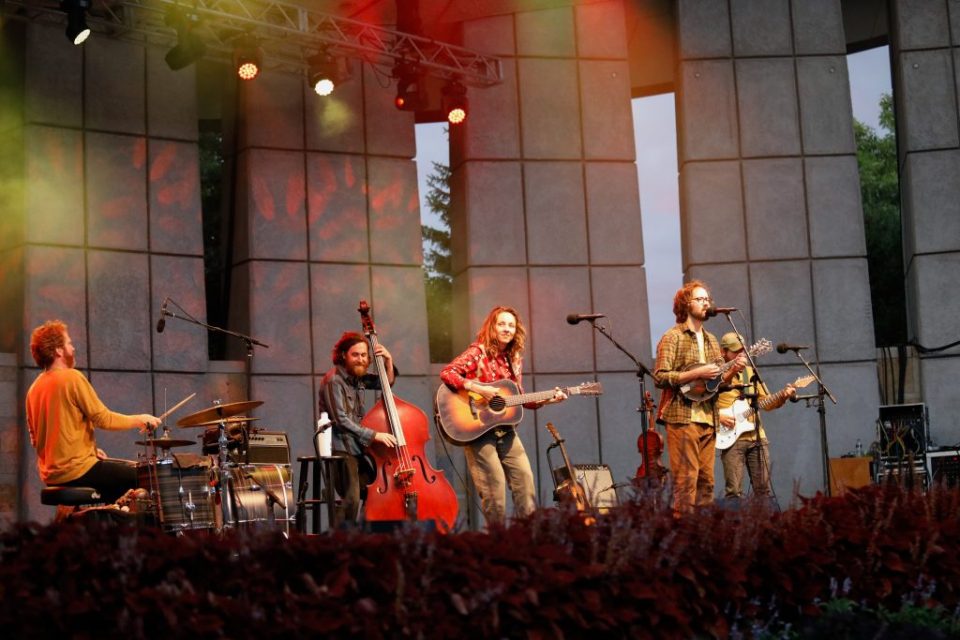 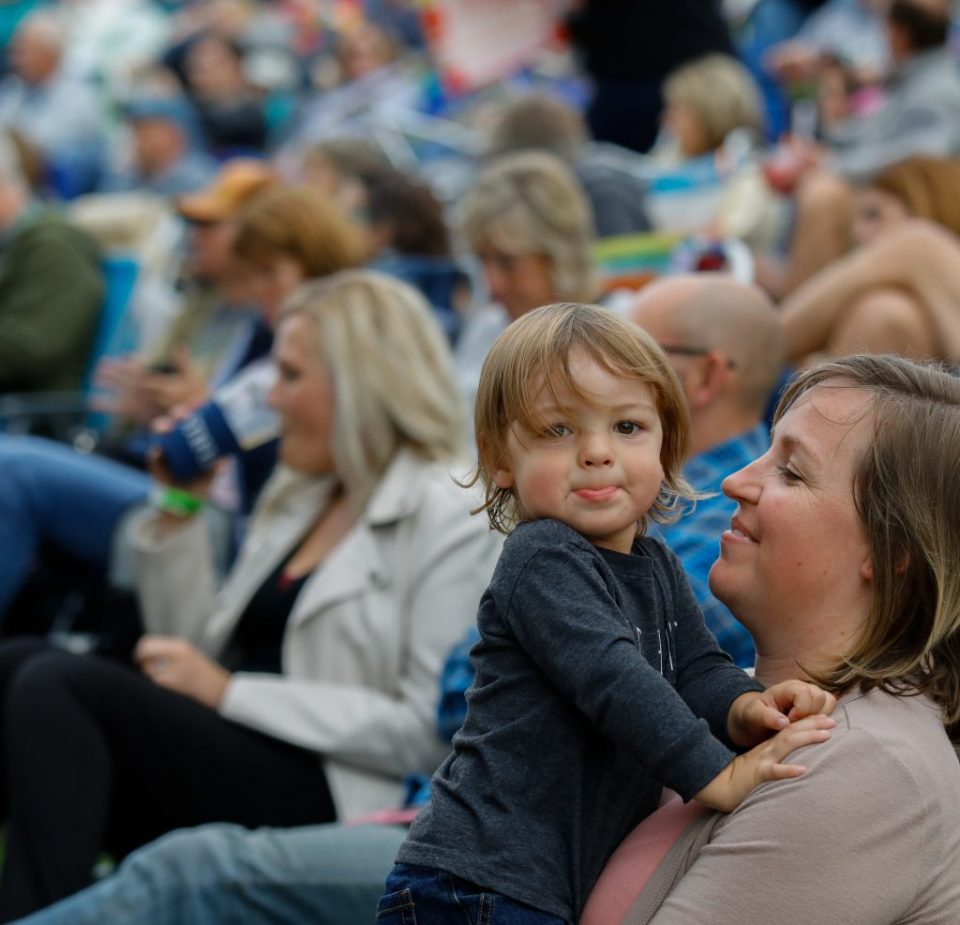 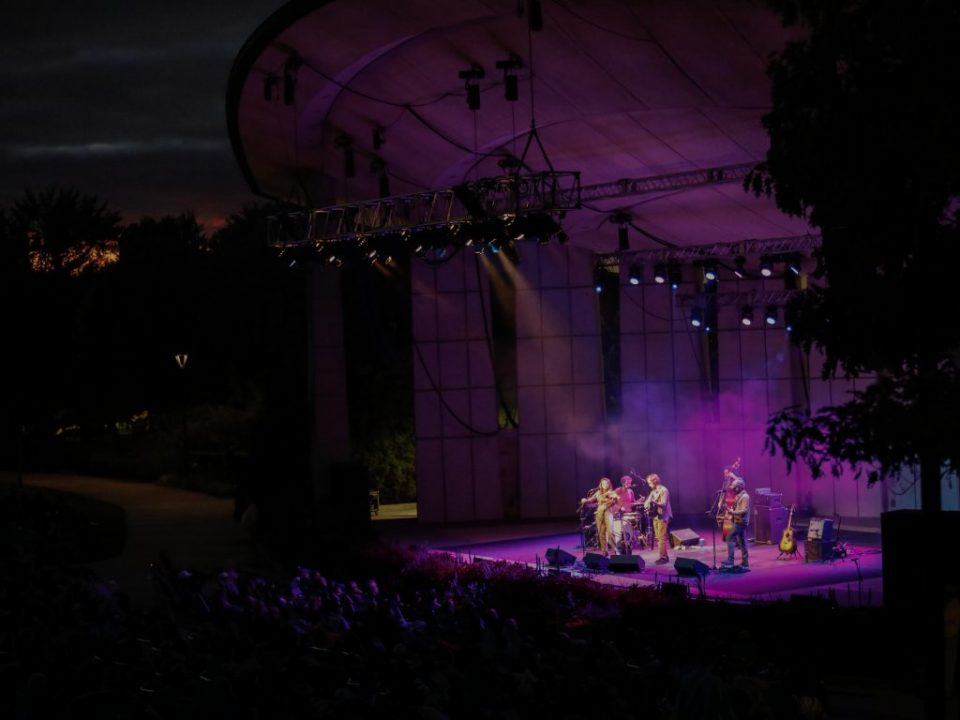 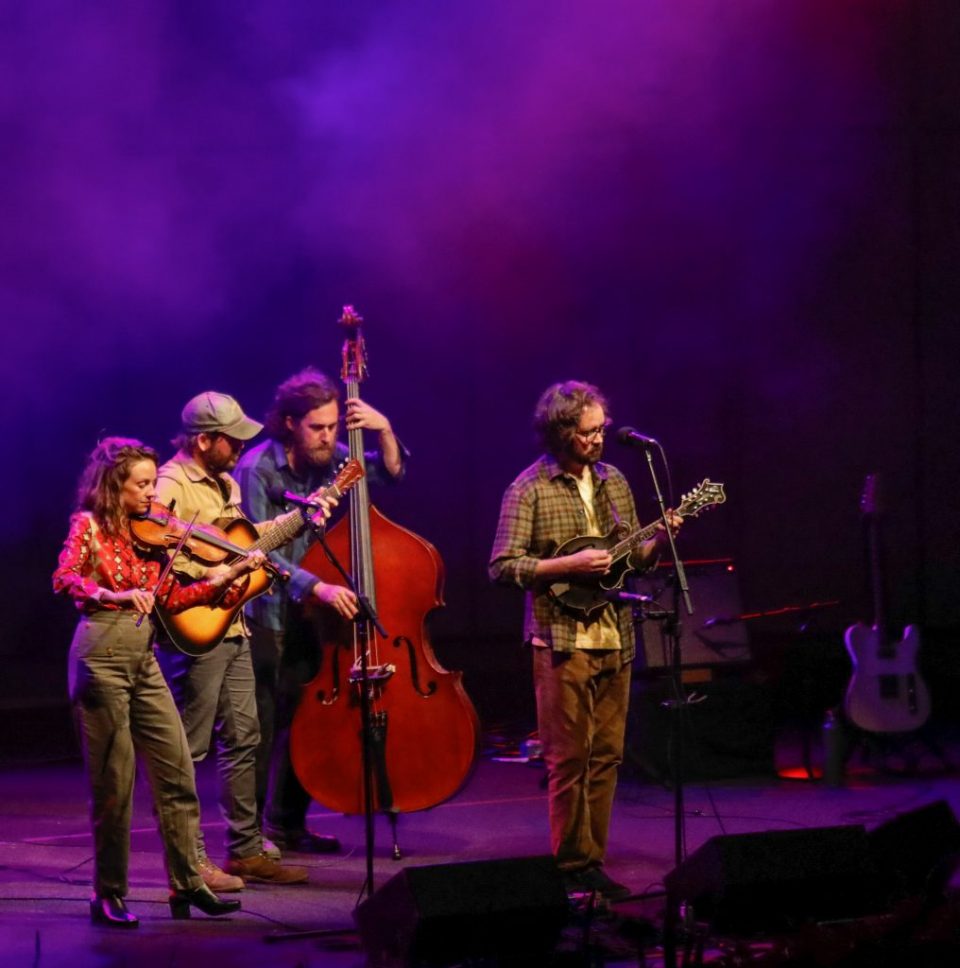 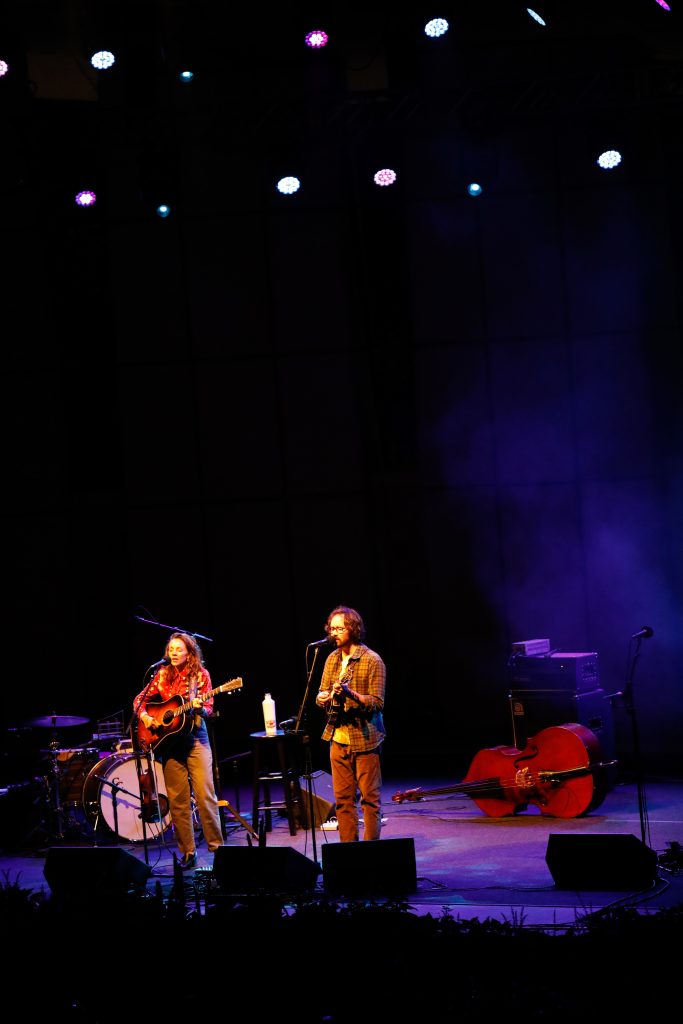 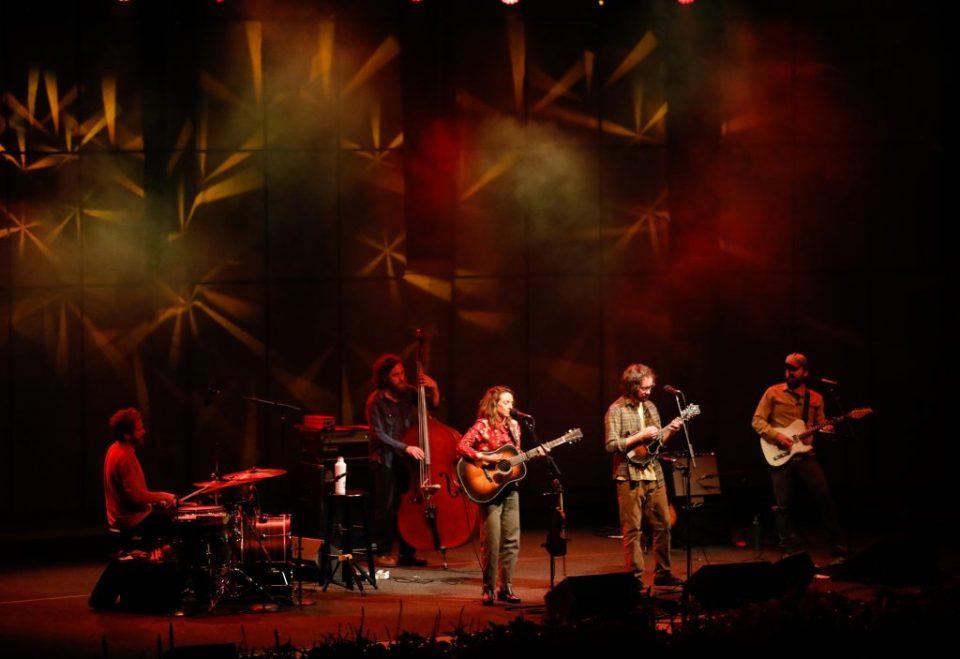 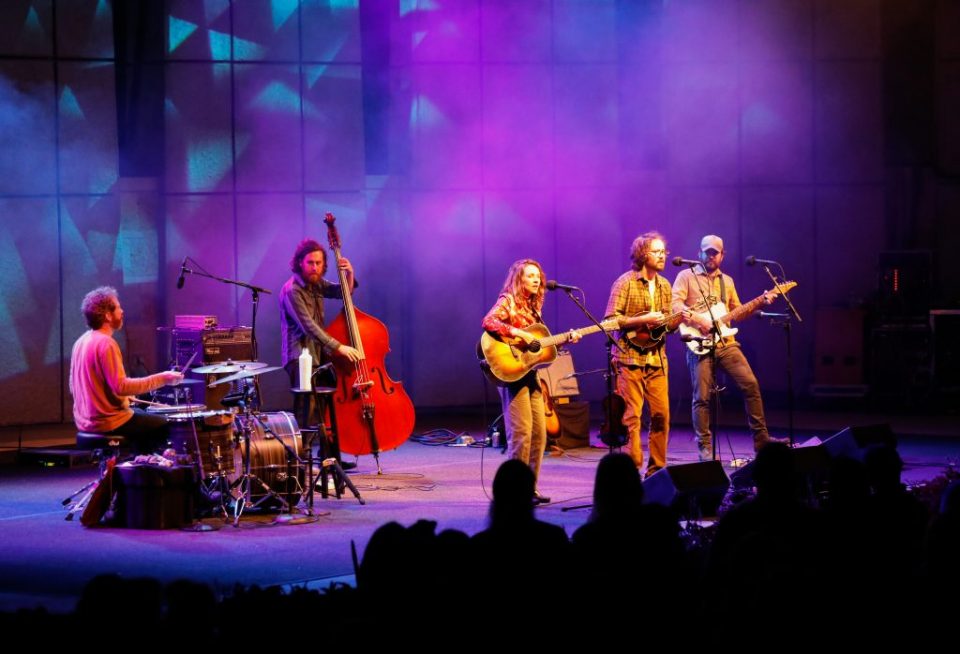 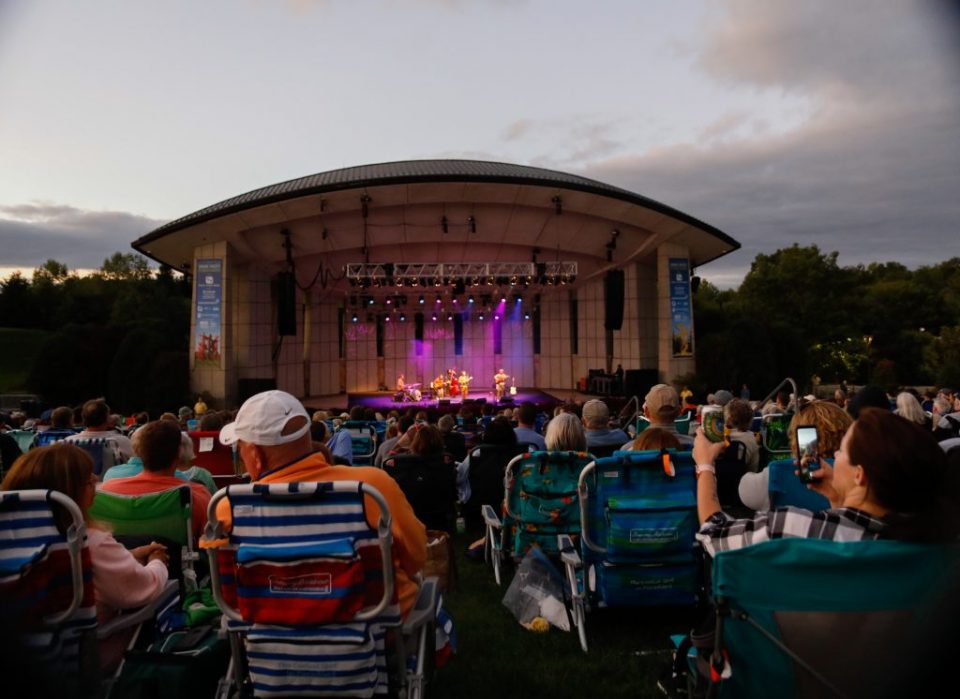 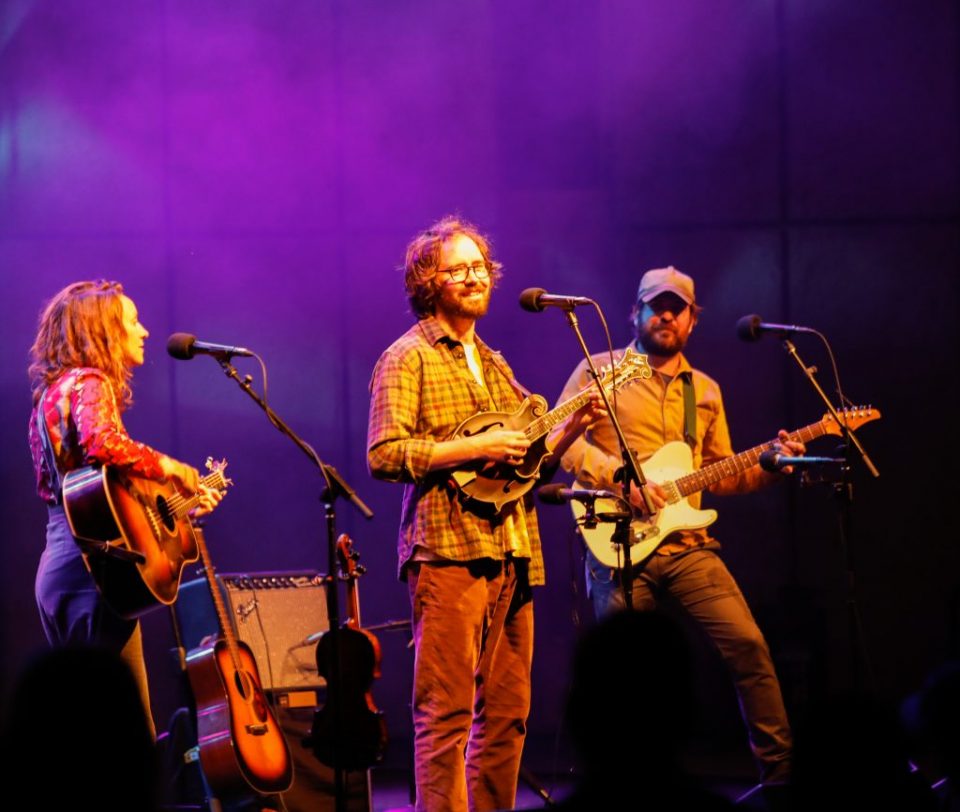 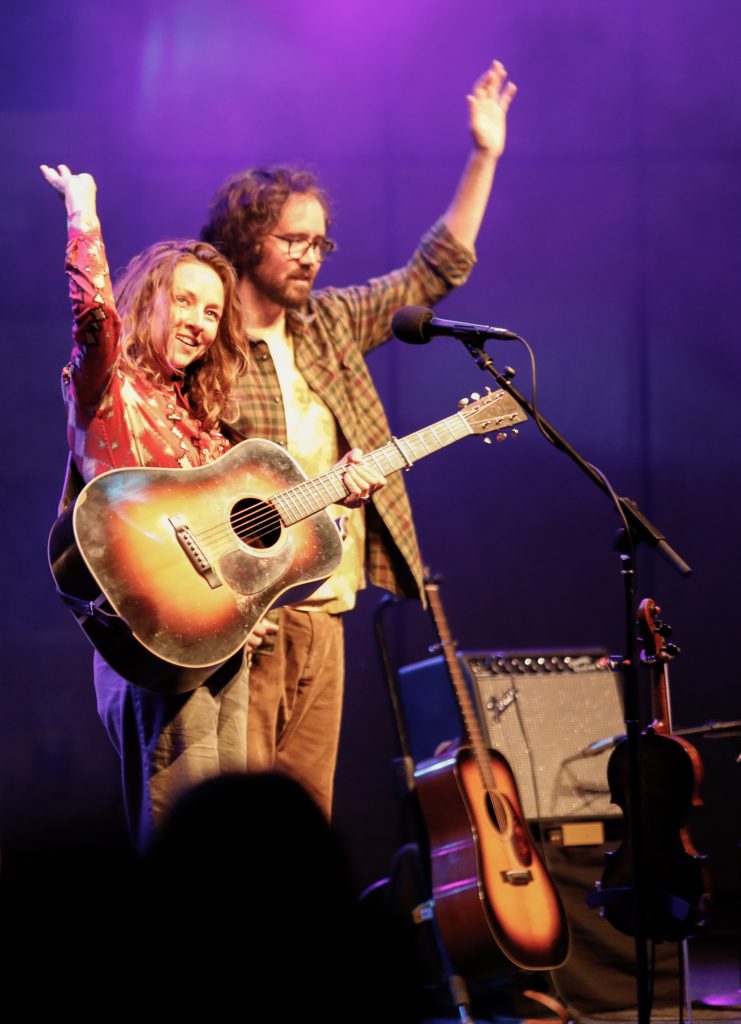 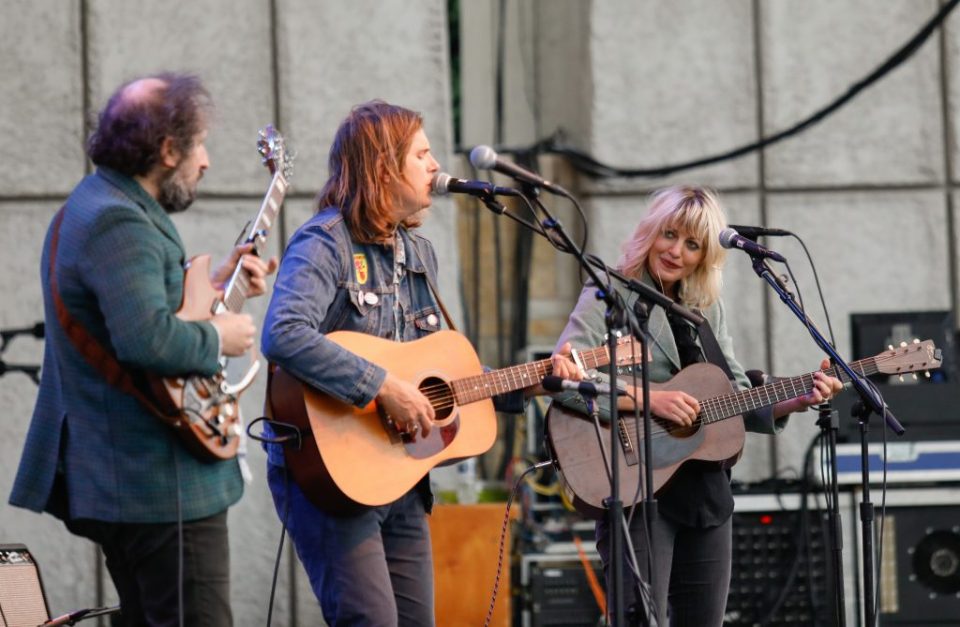 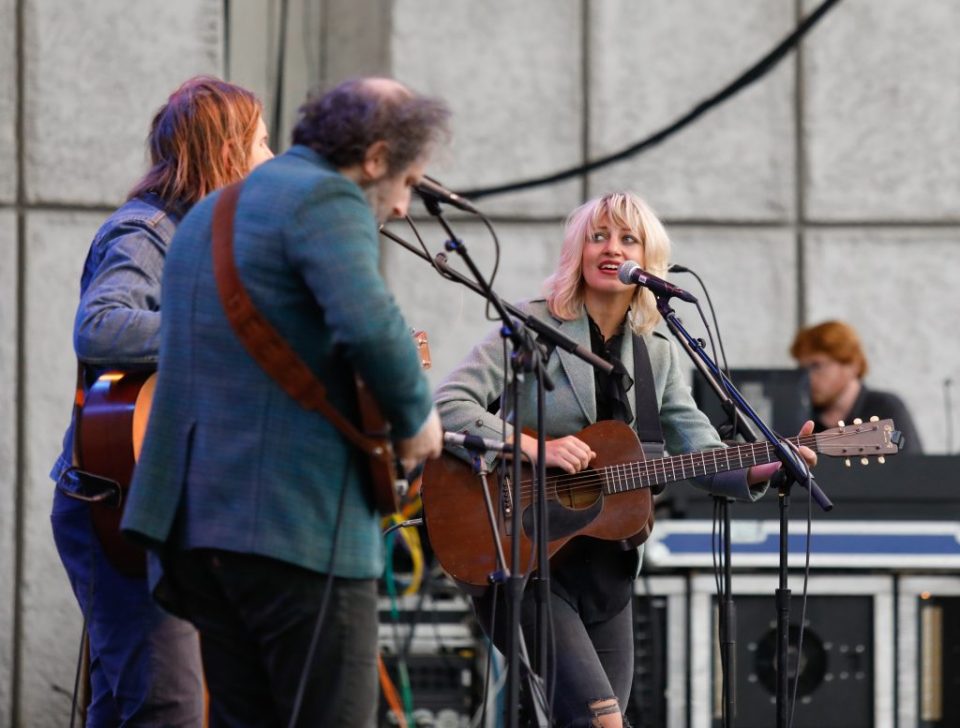 EDITOR’S NOTE: Just prior to the band’s arrival in Grand Rapids, Local Spins writer Ricky Olmos had a chance to interview the band via email. Here’s that Q&A.

LOCAL SPINS: I stumbled across Mandolin Orange back in September of 2015. Not in the usual way one discovers a band, like attending a show or streaming Pandora (it was 2015, remember), but in fact a friend of mine and then-bandmate, Jonny Carroll, opened your show at The Pyramid Scheme here in Grand Rapids. We talked about that show quite a bit afterward. Do you remember that tour stop? Do you remember what 2015 was like for you as a band?
Emily: Ah yes! Totally remember that show! 2015 was a fun touring year. It was the year we release Such Jubilee, and the year when we went on our first “real” tours with a booking agent, etc. The shows were small but we were feeling so cool in clubs like the Pyramid Scheme. I think our only other Grand Rapids shows have been at a really cool house concert festival called Lamp Light–not sure if it’s still going on. But needless to say it’s an honor to be back for a Meijer Gardens show.

LS: Jumping ahead almost exactly four years you’ve reached a number of milestones, including back-to-back headlining shows at the Ryman next week, an ever-expanding fan base and a plethora of high-profile festivals and sell-out shows around the world. How would you compare then (2015) and now?
Emily: Hopefully we’re just better at it. Touring is definitely a learn-on-the-job profession, and it’s been a really nice, steady climb for us. I think we are better at being on stage than we were then. Our music is not super performative, at least not in a stage acrobatics kind of way. It took us a few years to get the hang of presenting such patient, lyrical music on stage. I think the biggest part of it is gaining confidence, and getting to headline two nights at the Ryman, or open for folks at Red Rocks, gives us a lot of confidence in what we’re doing. 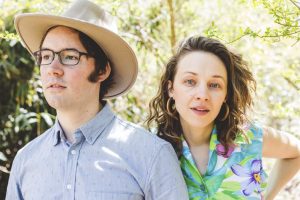 LS: Have any favorite gas station snacks?
Emily: Haribos! Gold bears are always a win, but lately their twin snakes have been the group favorite.

LS: Talk to me about ice cream: Let’s say you’re on a futuristic first-class rocket ship to a Martian colony with the most luxurious amenities, including a magical ice cream sundae bar with endless toppings. What ice cream and toppings do you choose? Spare no expense.
Emily: We keep trying to venture out but plain chocolate ice cream just cannot be beat. Every time I choose something else it’s good, but not as good. As people who eat ice cream almost daily, I’m pretty confident in that assessment.

LS: What’s one of your more embarrassing on-stage stories? (For me, it was last month when I tried to jump on a bass cab to play tambourine and obliterated the entire bass rig like I was Chris Farley in an SNL skit).
Emily: Ha. I’d guess many people’s embarrassing stage moments involve a tambourine. Andrew says his most embarrassing moment was the mandolin tone he was getting through a pickup at a Beaufort, N.C., gig back in (probably) 2010? He pulled the cord out of the pickup halfway through a song and I don’t think he’s used a pickup since.

LS: You recently recorded a session for NPR’s Tiny Desk. What was that day like?
Emily: So cool! It’s wild to see the full context of that room after looking at that little wall behind so many folks on Youtube. But all in all, the day felt a lot more relaxed than we might have guessed.

LS: You released your sixth studio album, “Tides of a Teardrop” in February. How do you feel about that record now that you’ve got a little distance from it?
Emily: It’s a special one for sure. It felt like the culmination of a lot of writing Andrew has done processing loss and grief over the last 10 years. It’s a more challenging record to stand on stage and sing every night, but I think for that reason crowds have connected to the songs in a very personal way, which has been cool to experience.

LS: What does the world need more of?
Emily: Ah, the world definitely needs less of a lot of things right now! More mandolin is our mantra.