The extraordinary event returns to Eastown with 33 diverse sets, plus classes and workshops, all unfolding in three homes. Get the lowdown here and see Local Spins’ “five acts to catch” at Lamp Light. 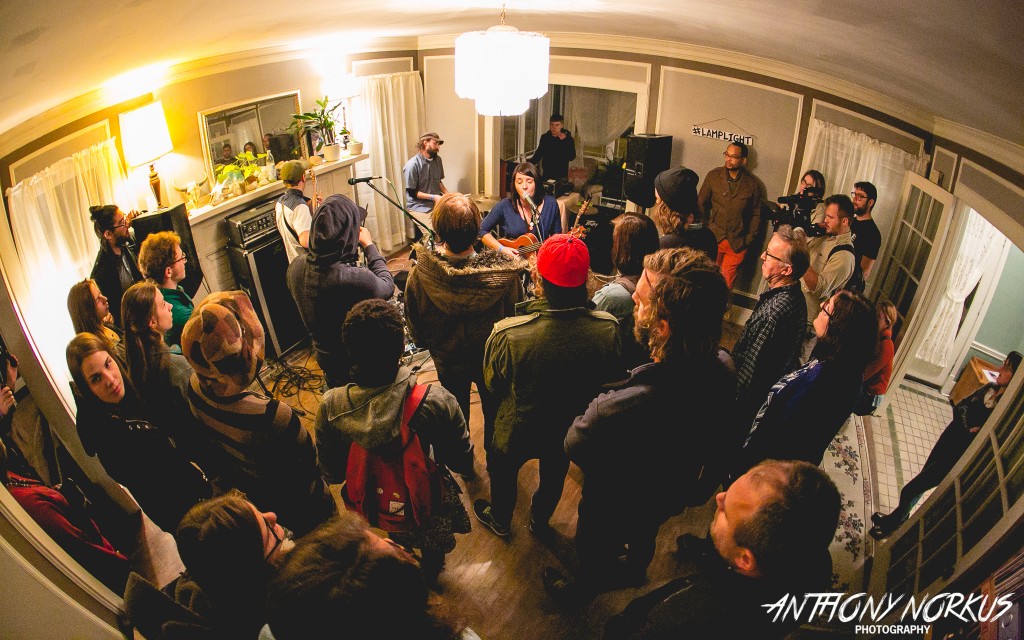 Surrounded By Fans Enthralled by the Music: Lamp Light unfurls for the fourth time this weekend. (Photo/Anthony Norkus)

SCROLL DOWN FOR ‘ACTS TO CATCH,’ MUSIC SAMPLES AND VIDEO

Strip away the stage and its many trappings, dim the beaming lights to a few scattered lamps, replace fog machines with slow-burning candles or incense. 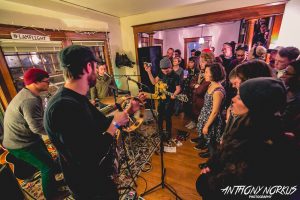 Forgo the expansive concert hall and enter the warmth of a living room, or a dining area and its creaky wooden floor, perhaps even a crowded basement with a ceiling requiring those entering to duck their heads beneath pipes and pull-switch lights.

In every scenario, fans are surrounded by others who are enthralled by the music. Everyone in the room becomes part of a community that’s engaged in the art taking place. Those who have experienced a house show firsthand often describe the experience as magical.

House shows illuminate the beautifully refined essentials of live music — namely, the artist and the listener — and that’s what Grand Rapids’ Lamp Light Music Festival is all about. 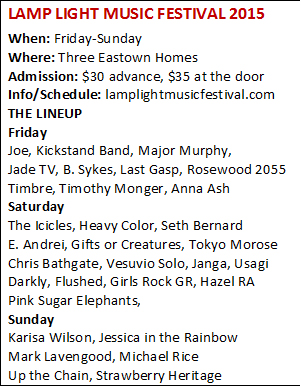 “House shows are usually more intimate and lend themselves better to fostering meaningful relationships with others,” said John Hanson, an organizer and founder of Lamp Light. “Being based on music alone and the propagation of creativity, they seem to yield a level of authenticity which I rarely see in bars or clubs, where other forms of commerce can sometimes overshadow the experience.”

Now in its fourth year, the festival runs Friday to Sunday in Eastown and features 33 local, regional and national bands that will perform at one of three houses, nicknamed Witch House, Brick House and Bird House. Tickets cost $30 and are available for pre-sale purchase at Vertigo Music on S. Division Avenue or online at brownpapertickets.com.

(Passes also may be purchased once the festival is under way for $35 at the door. For information regarding venue locations, visit lamplightmusicfestival.com. Check out a video that showcases Lamp Light below.)

“I thought about how I had so many connections to musicians and that putting together a festival in Grand Rapids would make sense. However, I had to shift my frame of thought about what a festival is and work within my means,” said Hanson, who also is immersed in the West Michigan arts scene through his videography work with area bands as well as heading up his own music project, Strawberry Heritage. 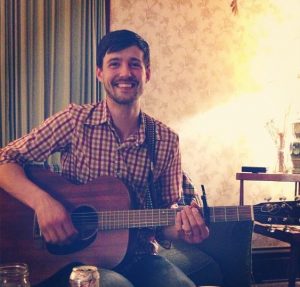 Realizing it was a unique resource to have a neighborhood so densely populated with “allies of the Grand Rapids DIY art and music scenes and a supportive business community,” Hanson concluded that all he needed was to conjoin the efforts of people and businesses in his community.

“If all of these people I know were to host concerts over a weekend, it would be a festival, our festival,” Hanson said. “So I asked, and people said yes, and the collaboration started.”

The event has grown, sparked more attention and gained traction as a mainstay year after year. A long list of sponsors include area establishments such as Vertigo Music, Harmony Brewing Company, Urban Roots, Wolfgang’s Restaurant, Field & Fire, Earthwork Music, Woosah Printshop & Outfitters, among others. Hanson has observed countless positive reactions to Lamp Light, and said the community has responded with overwhelming support and encouragement.

“It’s an incredibly spirited event and gives so many people opportunities to connect, share and engage. We love this city and this community and it’s all about coming together to celebrate what is uniquely ours; a culture of creators, artisans and collaborators.”

Well-known artists playing at Lamp Light include Chris Bathgate, Timbre, Seth Bernard, Big Dudee Roo, Gifts or Creatures, Mark Lavengood and Timothy Monger. But there are plenty of lesser-known, emerging acts on this year’s bill, too.

So, to whet your Lamp Light appetite, Local Spins has spotlighted five diverse West Michigan acts playing Lamp Light 2015. Listen to their music here, then catch them live in Eastown this weekend. 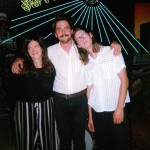 Major Murphy crafts a lush blanket of dreamy synths, warm guitars and muted percussion, draped over Jacob Bullard’s lead vocals to create a psychedelic portal that’s easy to get lost in. The young band recently released its debut EP, “Future Release,” and already has shared bills with well-known acts Frontier Ruckus and The Go Rounds. Created by Bullard as an outlet for his songwriting, the frontman quickly acquired the help of multi-instrumentalist, Jacki Warren and drummer Brian Voortman to flesh out the record and and add to live performances. 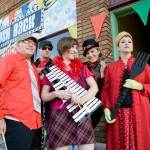 After taking a hiatus due to transitional phases within their personal lives, members of indie-pop’s The Icicles have returned “in full gear,” and are preparing to release their first album since 2012’s “Renegade Parade.” The Grand Rapids group, founded by guitarist and songwriter Gretchen DeVault and keyboardist Joleen Rumsey in 1999, has garnered a following with their airy, melodically diverse, tight-knit sound. Songs from the band’s repoitouir have also been featured in commercials by Target and Motorola.

Listen to The Icicles 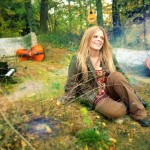 Jessica in the Rainbow

3. JESSICA IN THE RAINBOW
When: 1 p.m. Sunday
Where: Bird House

Mellow and ethereal, Jessica in the Rainbow’s songwriting and composition experienced on its first album, “Catalyst,” are true to the band’s title. The songs seem to float effortlessly among the clouds and through space with the lush, delicate vocals and colorful songwriting of Jessica Fogle tying it all together. A classically trained pianist with a degree in Musical Theater Writing from NYU’s Tisch School of the Arts, the Grand Haven artist boasts a long list of musical accomplishments that include writing the score for the movie musical, “Were the World Mine,” (a project that gained notoriety in its own right, having won 15 awards, including “Best Music” in the 2008 Nashville Film Fest) and an invite to be an artist in residence at Island Hill House in northern Michigan.

Listen to Jessica in the Rainbow

Haunting, with a sense of passion and sincerity, Tokyo Morose combines swirling, ambient sounds with synthesizers, live and sampled drum beats, grooving bass lines and dueling female/male vocals. The Grand Rapids band has made regular appearances at local clubs and released an album in 2012, “Sequence of Steps,” and has since accrued a following of fans privy to their carefully tailored and honed-in sound. 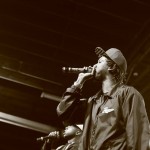 Intense lyrics and phonetic acrobatics drive Grand Rapids’ hip-hop artist B. Sykes’ music. Energetic and eclectic instrumentation provide a fitting landscape for each carefully crafted verse. Having released a brand new EP, “Young Black Jesus,” B. Sykes has kept a consistent list of performances this fall and is steadily cultivating a local fan base around his music.

Listen to B. Sykes