The longtime member of The Corn Fed Girls talked about her solo debut for Local Spins on WYCE, which also premiered tracks by Seth Bernard, .shi, Glen Danles, Aaron James Wright and other artists. 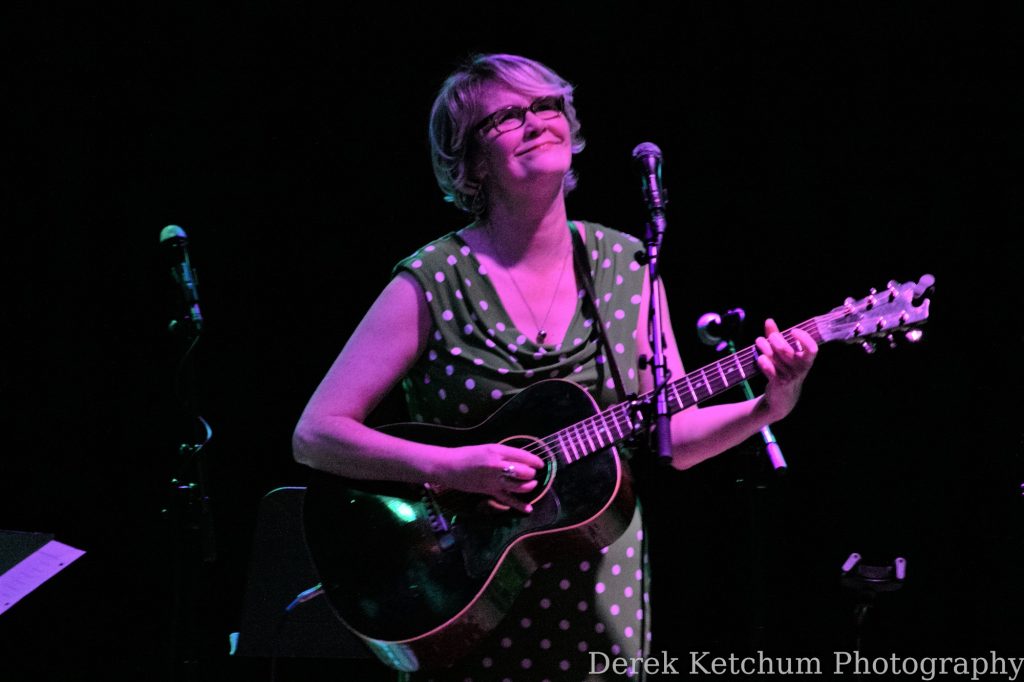 Kalamazoo singer-songwriter Darcy Wilkin finds inspiration for her Americana and folk music wherever she turns.

Since 1997, she’s been a member of The Corn Fed Girls, a “really fun and really cool” six-piece collaborative project full of “creative people.”

There’s also the music of the late John Prine, Wilkin’s “No. 1 guy” who always seems to “say exactly” what needs to be said in a song – though she also counts Gillian Welch, The Carter Family, Todd Snider and The Red Clay Ramblers as muses.

But make no mistake: Her father, Mark Sahlgren, and his bluegrass band, Sweetcorn, have “provided much of the soundtrack” for her life.

“The greatest influence on me, musically, is my dad. He’s a great writer and a killer guitar player,” Wilkin said. 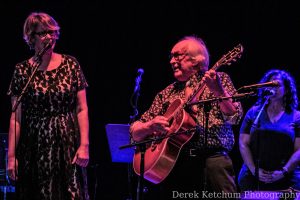 Influenced by Her Dad: Wilkin on stage with her father, Mark Sahlgren. (Photo/Derek Ketchum)

“It can’t be overstated. He’s the guy who taught me the chords that I know and right from the beginning. … I’m pretty much Mark Sahlgren’s daughter and that’s a great thing to be.”

After decades of performing with other bands – including her father’s Mark Sahlgren & The Fragile Egos – Wilkin recently stepped out with her debut solo album, packed with insightful, incisive and reflective songs written over the past 10 years or so.

As she puts it, she had “a bunch of songs rattling around” for years and wanted to show booking agents and festivals, “Here’s what I can do.”

So, the Kalamazoo native who’s spent time teaching abused and neglected children released “Bristol” early this year, just before the COVID-19 pandemic that shut down concert venues and halted most tours.

“I wanted to play more as a solo performer and I needed to have something to show folks what I do. That was part of the motivation for the solo album,” she said.

“Also, I had some songs I really liked, but for one reason or another, they didn’t necessarily fit with what The Corn Fed Girls were doing. I wanted to get them out into the world.”

The music on that album – which includes a compelling track inspired by research into Antebellum-era asylums – clearly has resonated with fans: “Bristol” landed on the Local Spins Hot Top 5 Chart of most-played regional releases at Grand Rapids’ WYCE-FM in March and May.

And Wilkin hasn’t been sitting still since that release: She performed two freshly penned works – “Lost and Found” and “The Willis House” – for this week’s edition of Local Spins on WYCE. Watch the video of her performance of “Lost and Found” here; scroll down to listen to the full radio show podcast.

Wilkin also has been live-streaming regular performances from her home during the coronavirus shutdown, although she conceded she’s “champing at the bit to play for live audiences again.”

“The live-stream format has been really interesting. There’s a slightly different set of skills needed to do it well. When one is used to playing out live and having a back and forth with people, an exchange of energy, there is a certain flow that one gets used to. Playing to people who are at home, watching me on a screen is different,” she said. 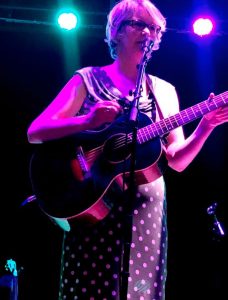 Eager to Get Back on Stage: Darcy Wilkin (Photo/Dan Lauterbur)

“But it’s also kind of freeing. No one is talking over me when I play. If I have a thing I want to talk about, I can, for as long as I like. And it’s a weirdly confidence-boosting exercise. If I can pull off playing alone and have it feel natural, and the audience can feel like we’re in a room together, that’s a great feeling.”

Still, she conceded: “I miss playing in front of people like crazy.”

“The biggest thing isn’t really the gigs that were lost, but the ones I have yet to be able to book. I have this record that I’m really proud of. Even though there are guest musicians on it, it’s a really good representation of what I do when I play solo,” she said.

“Now, I have the product to show people – venues, booking agents, etc. – but no one is doing much booking, because no one really knows what’s on the horizon. I am anxious to get the album in people’s hands so they can hear it.”

Learn more about Wilkin on her website and listen to “Bristol” online here.