After nearly calling it quits amid COVID, the Michigan band now gets re-energized with two saxophonists. The back story and Local Spins on WYCE podcast, with the debut of new tracks by Michigan artists. 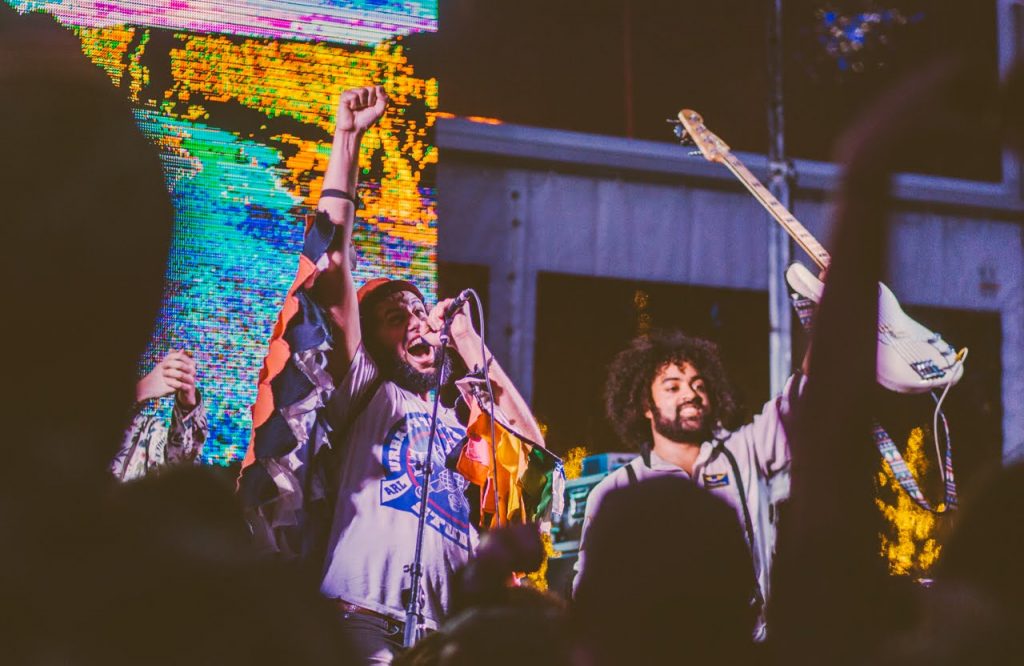 Back to the Stage: Joe Hertler and band will perform in Muskegon and Grand Rapids later this month. (Courtesy Photo/Polish Katie)

With touring and festival performances wiped out – and saxophonist Aaron Stinson choosing to step away from the popular Michigan band – Hertler became convinced earlier this year that “we were one of the casualties of COVID.”

“It was like, this is the end. It was really tough. I mourned it,” the Lansing singer and guitarist recalled, acknowledging that Stinson’s initial announcement to leave for family reasons hit Hertler hard.

“I struggled with that immensely. To me … he’s the co-frontman. There are people who come to the shows just to see Aaron. He’s like the spirit of the band in so many ways in a live sense, especially. I was just like, I don’t want to do it without him. He’s one of my best musical friends. It’s like someone leaving the family.” 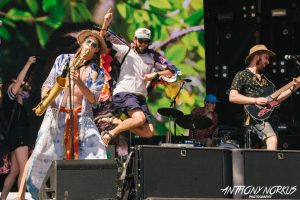 But shortly thereafter, after some discussion, the band brokered a solution: Stinson and the band’s new saxophonist, Caleb Elzinga of Byron Center, would both play Michigan shows and bigger concerts, turning the group into a seven-piece band. Elzinga, meanwhile, will join the Rainbow Seekers for any “hard touring” that takes place.

“It was like a massive sigh of relief,” Hertler conceded. “I’m excited for it. I’m really interested to see what they come up with.”

Fans will get a chance later this month “to see what they come up with,” too.

Joe Hertler & The Rainbow Seekers will perform three straight nights outdoors next weekend – Sept. 11-13 – at The Deck on the Beach in Muskegon, then finish up the month with a drive-in show at Grand Rapids’ Belknap Park on Sept. 25. Two of the Muskegon shows already are sold out.

First formed about a decade ago, the band – which fuses pop, soul, rock and folk into its musical stew – already has played a “test-run show” to work out some kinks.

“I’m really excited for these coming up,” Hertler said, adding that the shows will be socially distanced and require masks “to make sure these are safe” for attendees. “These next three shows are going to be awesome.”

STAYING POSITIVE AND FEELING AT HIS BEST WRITING NEW MATERIAL

Hertler has spent much of the pandemic creating new music in his home studio. He shared a demo for one of his new songs, “Last One Awake,” for this week’s edition of Local Spins on WYCE, describing the track as a stripped-down, atmospheric “COVID song” created during “sedentary times.” Scroll down to listen to the track as part of the full Local Spins on WYCE podcast.

Hertler conceded it was “a tough pill to swallow” at first to have “the very thing that defines you” as a musician taken away by the pandemic shutdown. But he’s adjusted to the ‘new normal’ and has continued to be productive.

“You just have to keep trying to do your best and stay positive. There are good days, there are bad days,” he reasoned.

“I’m not a tour dog. I don’t love touring; I love parts of it. I just like being in the room and working on music all day. I’m happy when I’ve written a song. That’s where I’m at my best. I’ve enjoyed that part of it a lot.” 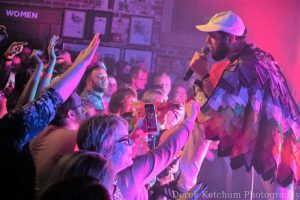 Consequently, Hertler estimated he has created demos for about 20 new songs and “definitely enough for a record” to follow up the group’s most recent album, 2019’s “Paper Castle.” The band also stages occasional retreats to practice and go over new material.

What emerges in the band’s music is a mix that’s “all over the place,” owing to the musicians’ wide range of influences.

Raised on a mix of artists such as Sting, Barenaked Ladies and Bela Fleck, Hertler said he frequently gets “really obsessed with a genre” – from hip hop to house and techno music to “songwritery Americana stuff.”

All of it has resonated over the years with the band’s audiences, who wave huge sunflowers at the group’s live shows while Hertler prances about the stage in his rainbow-colored wings.

“The connection you have with an audience, that’s almost like everything,” Hertler said. “People go to shows to feel connected.”

That makes the upcoming September shows a much-anticipated reunion of fans seeking a connection that’s been lost during the 2020 pandemic. Indeed, the Sept. 12 and 13 shows already are sold out; some tickets remain for the Sept. 11 and Sept. 25 concerts.

“It’s this very glorified and unique way to connect. That’s why we’re drawn to it,” Hertler said of live performances. “When we’re deprived of that, we’re missing something.”

In addition to an interview with Hertler, this week’s edition of Local Spins on WYCE – which showcases Michigan artists at 11 a.m. Fridays on WYCE (88.1 FM) – featured the on-air debut of tracks by Brother Elsey, Rachel Brooke, The American Hotel System and Emma Bieniewicz, as well as tracks from Bronze Wolf, August, Bruce Madden, Political Lizard and JRob (who performs at 3 p.m. Saturday outside Grand Rapids’ Studio Park as part of a “Summer in the City” show). Listen to the full radio show here.