The 19-year-old Cedar Springs singer-songwriter was featured for Local Spins on WYCE, which also debuted tracks by Annagail, I Believe in Julio, Brother John & The Lonely Roads, Rick Chyme and more. 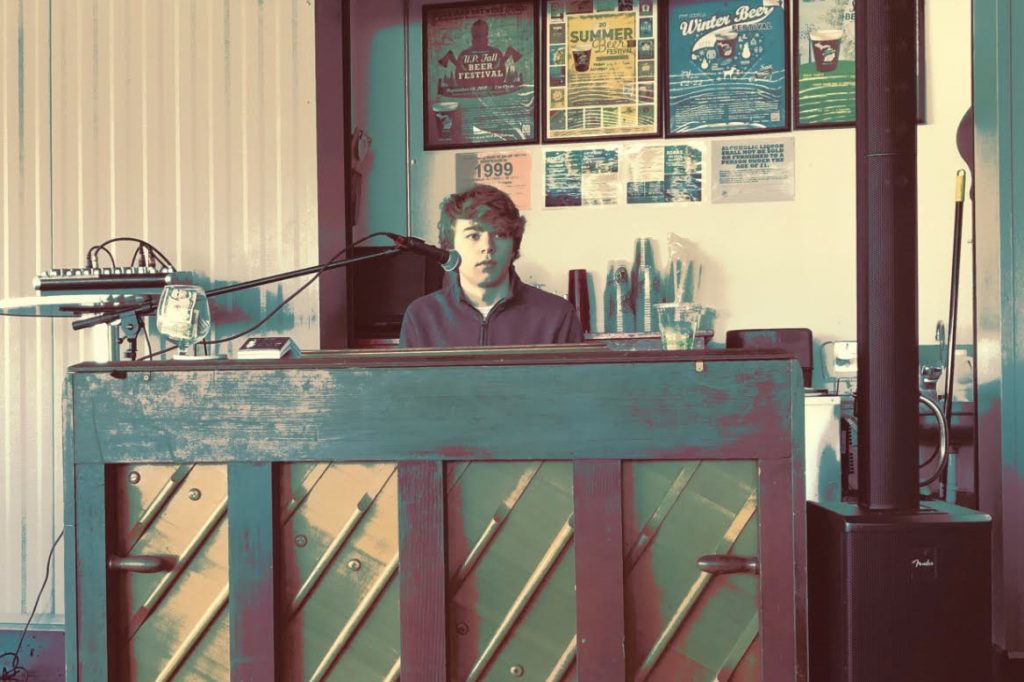 SCROLL DOWN FOR VIDEO AND THIS WEEK’S RADIO SHOW PODCAST

It could be in the genes.

Porter Kenyon’s great-grandfather, George Donoho, was a rising star of sorts, performing on country radio in the late 1950s and early 1960s in Jackson, Mich., just part of a long musical tradition in a family where Porter’s father, Adam, is a musician and his sister sings as well.

The 19-year-old pianist and songwriter from Cedar Springs recalls sitting in the living room as a youngster for family sing-alongs. 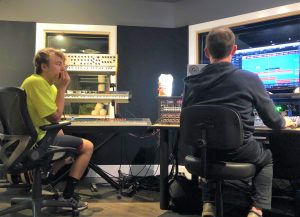 In the Studio: Porter Kenyon at Planet Sunday. (Courtesy Photo)

“I have good memories about that,” said Kenyon, who took up piano lessons in second grade, began writing songs at age 11, graduated from Cedar Springs High School in 2020 and is now studying mechanical engineering at Central Michigan University.

These days, Kenyon is creating his own memorable music, having released a series of piano pop-rock singles over the past two years with a big assist from Joel Ferguson at Rockford’s Planet Sunday Recording Studios.

“My first few songs have been a slightly slower-tempo piano rock,” said Kenyon, who cites Ben Folds, fun., The Beatles, Twenty One Pilots and Billy Joel as influences while attempting to “branch out” stylistically.

“I’ve been experimenting more with my writing styles and my latest song is more up-tempo and features more strings and guitar.”

For this week’s edition of Local Spins on WYCE, Kenyon debuted his sixth single, “Insane Asylum,” which officially doesn’t get released until Aug. 27. Scroll down to listen to that track, an earlier release, “Set You Free,” and the full radio show podcast, with Kenyon’s video for 2019’s “Things I Shouldn’t Have Said” here.

Kenyon conceded that he balances creation of his striking music with his love of math and mechanical engineering, with hopes of always “writing and recording my songs.”

He’s acquired his own recording gear and software, taking time to lay down new tracks whenever he can, even in his dorm room at college.

“I’m very thankful for where I have gotten so far, so my goal is to keep going and take those opportunities and see what happens,” he reasoned.

“I will keep learning as much as I can to try and keep becoming a better writer and musician. If my music got a little bigger, that would be really great and I’d be thrilled.” 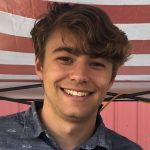 Kenyon already has earned attention from the Los Angeles-based site Spider Cues and his YouTube videos and Spotify tracks have racked up more than 10,000 views/listens. He plays regularly at Cedar Springs Brewing Co., with his next performance at 12:30 p.m. Sunday (Aug. 1).

And his knack for turning “random jumbled words” into compelling lyrics, paired with captivating melodies, continues to impress audiences.

“I would love for other people to also like the stuff that I make and for it to bring joy to them,” he said. “But in the end, I really just love writing and I’m gonna keep doing it no matter what.”

This week’s edition of Local Spins on WYCE – which spotlights local and regional music at 11 a.m. Friday on WYCE (88.1 FM) and online at wyce.org – also featured the debut of new tracks by I Believe in Julio, Brother John & The Lonely Roads, Jack Droppers & The Best Intentions, Creature of One, Annagail, Rick Chyme & After Ours and Brendan Benson (this week’s musician’s pick by Kenyon) as well as music from Joshua Davis, Asamu Johnson & The Associates of the Blues and Dalmatian Stone. Listen to the full radio show here.