Logging 14-hour days in the recording studio and challenging themselves to fashion fresh music that really matters, the boys in Brother Elsey were more determined than ever to “really set this collection of songs apart from the rest.”

Consequently, the Grand Rapids band of brothers’ new album, “You Don’t Know Anything” resonates with the sort of impactful charm reserved for top-shelf, pop-hued Americana and roots rock stalwarts. ‘We Felt These Songs Were Important’: Brother Elsey (Courtesy Photo)

“We put a lot of work into it. We felt these songs were important,” singer and guitarist Brady Stablein said of the band that also features Jack Stablein on lead guitar, Beau Stablein on bass and “honorary brother” Dalton Thomas on drums.

“With this record specifically, we spent a lot of time in the studio with no real time constraint, which is a nice thing. Having the freedom and the time to be creative in the way we wanted to really helped us cultivate this certain sound.”

It also meant having “full rein” over the process, fleshed out in the River 16 studio outside Toronto, Canada, about a week before the COVID pandemic shut things down in spring 2020.

For this week’s edition of Local Spins on WYCE, Brother Elsey showcased two of those songs – “Take a Chance” and “Heartland.” Scroll down to listen to the songs and the full radio show interview, with the band’s music video for “Dreamer” here.

As for the songs themselves and the album title, it “had a lot to do with the unknown and how to accept the idea that some things are just unknowable.”

That includes information about yourself, your relationships, society and the world around you, Stablein said.

“Maybe it’s better to leave things be then to keep diggin’ for some sense of control, whether that be with other people or yourself,” he said. “We thought that was a perfect way to encapsulate the feeling of the record as a whole.”

‘GOING BIG’ WITH RELEASE SHOW AT THE PYRAMID SCHEME

To “stay relevant” during the period of COVID silence, the band also decided to release a series of several singles from the project before officially dropping the full recording today (Sept. 24) with a release show at The Pyramid Scheme in Grand Rapids.

“For this show specifically, we’re going big with it,” Stablein asserted. “We’ve got a set that’s dynamic, entertaining and everything that people are hoping for from a Brother Elsey set and then some.”

After spending months “just honing our craft and getting better with each other,” the band recently returned from a string of shows with Michigan Rattlers and the brothers feel good about being back on stage. 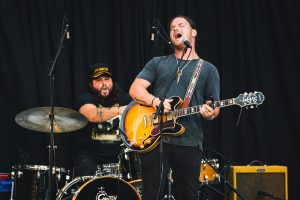 “There’s an obvious worry for us on the road regarding the virus, but we take it day by day and figure it out as it comes,” he said.

Figuring and working things out has been a trademark of these siblings with a unique musical camaraderie since 2010 when they’d “play on the street and busk for people” in the Detroit area, “just being weird kids” performing covers of songs by Never Shout Never and One Republic.

“We always tell people it’s easier than it looks from the outside,” Stablein said of the brotherly arguments that are inevitable.

“We have a good way of letting things go. … We say what’s on our minds and we don’t hold back. I think that allows for us to get to the point without really having to save each other’s feelings. We’ll get over it quickly.”

And after a long period of forced seclusion due to the pandemic, Brother Elsey is finally ready to unfurl the music they’ve spent so much time shaping and refining.

“We’ve definitely taken the time to focus on our sound, focus on the logistics of the band,” Stablein said.