The album inspired by iconic jazz guitarist Django Reinhardt topped an all-new roster of popular Michigan releases. See the complete chart and listen to songs from all of the featured artists. 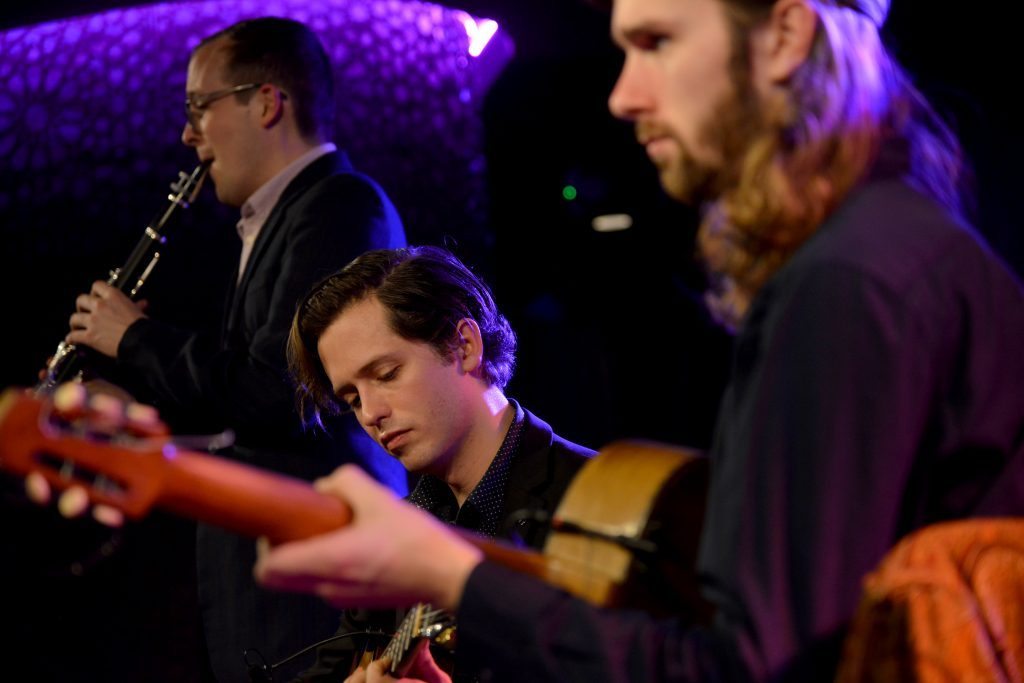 SCROLL DOWN TO LISTEN TO HOT TOP 5 ARTISTS, PLUS A DJANGOPHONIQUE VIDEO

Indeed, Brown was so captivated by this music that he launched something he calls “Djangophonique” during a time period when Ann Arbor’s Appleseed Collective was “slowing down” its intensive touring schedule. 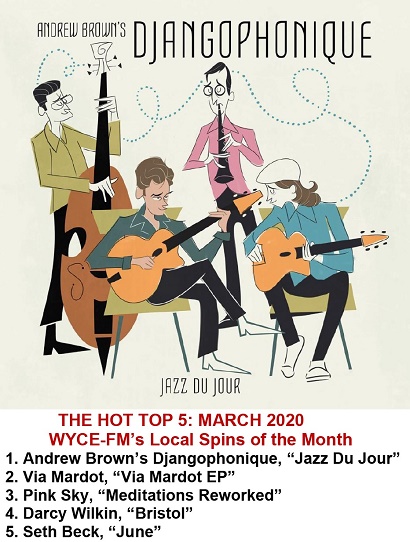 An All-New Roster of Albums for March

“I had more time to dedicate to learning this ethno-folk music style,” said Brown, who grew up in mid-Michigan as the son of a Motown session musician.

“The thing that really cemented for me that this is a style of music I’m in love with was that I traveled to music camps in this style where I have studied with some of the best players from all over the world: Angelo Debarre, Romane and Sebastian Gineaux from France, Gonzalo Bergara from Argentina. But also just met an entire scene of people interested in this music and learned so much from all of them.”

That deep affection led Brown to record a self-titled debut album steeped in Django jazz, and it didn’t take long for that project to make a splash: “Andrew Brown’s Djangophonique” debuted at No. 1 on the Local Spins Hot Top 5 Chart for March, representing the Michigan album receiving the most airplay last month on WYCE 88.1 FM in Grand Rapids.

“The reception I’ve gotten from fans old and new has been immense. More surprisingly than a lot of Appleseed fans really liking the music has been all the people who love the music of Django Reinhardt who maybe never heard of Appleseed who have come out of the woodwork,” Brown said. “The response to the content we have been putting out there has been overwhelmingly positive.”

The eight-track album topped an all-new Hot Top 5 chart of local and regional releases for March, with Olivia Mainville’s self-titled “Via Mardot” project (which also has been described as “manouche-inspired”) coming it at No. 2 and Pink Sky’s “Meditations Reworked” compilation featuring different electronic music artists’ take on the Grand Rapids duo’s songs entering the chart at No. 3. 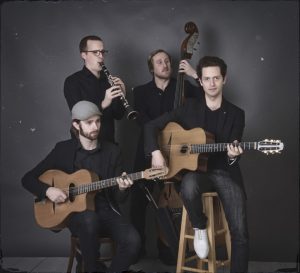 The Band: When it’s possible, Djangophonique is ready to share its music with audiences. (Courtesy Photo)

For Brown, Djangophonique is “definitely the new project” he’s focusing on, though roots music’s Appleseed Collective is still intact and recently released a new album, too. Depending on the impact of the current coronavirus crisis, Djangophique has some “very exciting gigs” coming up later this year.

“Either way, the band is ready to keep sharing this incredibly romantic and joyous music once we are able to do so,” he said.

But make no mistake, there was a steep learning curve to get to this point for the guitarist.

“The hardest part at the beginning was retraining my right hand: the entire picking technique of the style is completely different than what you might find in early American jazz guitar, electric guitar or bluegrass guitar,” he noted.

“It’s not flatpicking as it isn’t strictly alternate picking: It uses a lot of down/rest strokes where the full weight of the hand drops the pick through a string to come land on the next strings. Once I got a handle on that, it was a lot easier to begin the endless journey of learning Django’s solos note for note.”