Today, the leader of Hank Mowery & The Hawktones reveals the albums that have shaped his music, along with a current favorite legend who has him mesmerized. Listen to tracks from all of the recordings. 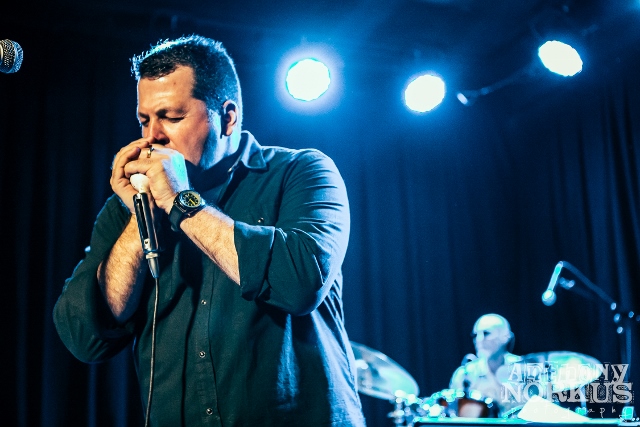 EDITOR’S NOTE: All musicians can trace their inspiration to key recordings that captivated them and influenced their careers. Writer Ross Boissoneau today showcases recordings that changed the world for Grand Rapids blues harmonica favorite Hank Mowery. Scroll down for a Spotify playlist of his picks as well as tracks from his own releases.

Hank Mowery grew up in a musical family, and found himself influenced by a variety of genres. “I grew up in a family that listened to a lot of different styles – bluegrass, old country, R&B, a lot of blues. My grandmother was the musical matriarch. She always liked to turn on blues.”

As for himself, he drank it all in. “I liked all kinds of stuff,” he said, eventually picking up harmonica and gravitating to the blues himself.

Later, as general manager of the Rhythm Kitchen Café, he jammed with the blues acts that came through and found himself mentored by blues harp greats. “It really was a special moment in time,” he said in a 2015 interview with Local Spins, “and it helped me immensely to see these guys and see them up close.”

After his friend and blues harmonica player Gary Primich passed away in 2007, Primich’s family asked Mowery to finish a recording he’d been working on. “Account to Me” features both Primich and Mowery originals with a couple blues covers.

“That jump-started us,” Mowery said, so he and his band the Hawktones began touring the Midwest. He also worked for years with late local guitar legend Junior Valentine and credits becoming an empty-nester with prodding him to write more songs.

Hank Mowery & The Hawktones are one of the featured bands performing for Local Spins’ week-long 10th Anniversary celebration in Mid-May. The band will perform during a special blues night at Tip Top Deluxe Bar & Grill on May 20 with Jake Kershaw. Tickets, $10, and details available online here. 2. Carole King, “Tapestry” (1971) – Another real big one early on was “Tapestry.” That comes from memories of my mom on Saturday (when) I was in elementary school. That would be blaring through the house. I remember it making her happy. It created a good feeling.
Listen: “I Feel the Earth Move” 3. William Clarke, “Blowin’ Like Hell” (1990) – This sent me in the direction to where I am now. It’s a wall of sound coming out of the recording. He had one of the biggest, fullest tones of anybody that’s ever lived, a unique sound no one else had. He played harmonica more like a horn player. It was West Coast swing rather than Chicago blues. It sounds like a horn section. His playing fit the songs so well, you felt the tune and made it better. It made me look at who else was out there and want to learn to play with better tone.
Listen: “Blowin’ Like Hell” Currently Loving: Leon Russell – I’m going down a rabbit hole with Leon Russell. I saw him at Rupp Arena (in Lexington). My mom took me to see Willie and Family with Leon opening (“The Red-Headed Stranger” was important to me.) I recently heard an interview (with Russell) that sent me down that path. He wrote for the Carpenters, Joe Cocker. I’m intrigued by really good songwriters. He was in the Wrecking Crew, his playing on “A Song For You,” I’m intrigued by all the stuff he did with Joe Cocker, and I go back to his stuff with Willie.
Listen: “A Song for You”

ALBUMS THAT CHANGED THE WORLD: Hank Mowery’s Playlist on Spotify