The iconic former frontman of Yes brought his national tour to 20 Monroe Live in Grand Rapids on Thursday to regale diehard prog-rock fans and he didn’t disappoint. Review, photo gallery. 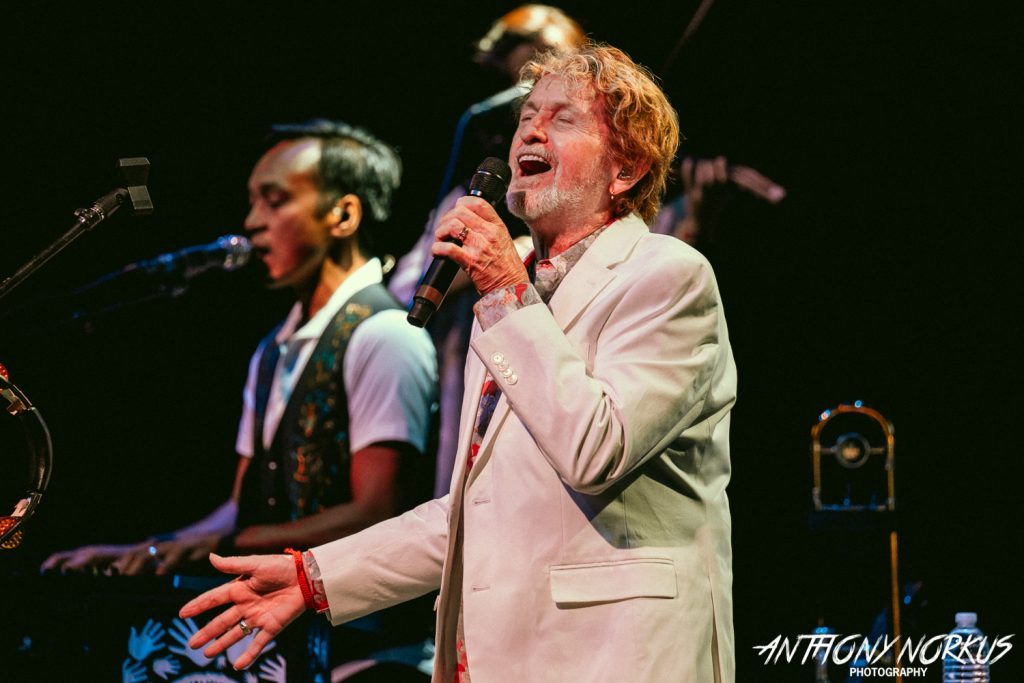 The Voice of Yes: Jon Anderson on stage with his band at 20 Monroe Live on Thursday. (Photo/Anthony Norkus)

A contingent of Yes-heads and casual fans descended on 20 Monroe Live in Grand Rapids on Thursday night to hear Jon Anderson, “the voice of Yes,” and the diminutive singer did not disappoint.

His voice was supple with just a hint of rasp, and in his natty white suit he was a focal point as well as a vocal point throughout the night.

As promised, there was a cross-section of material from Anderson’s career. It included Yes tracks dating as far back as “Time and a Word” (the band’s second album from 1970), Anderson solo material, even his work with Greek keyboardist Vangelis. 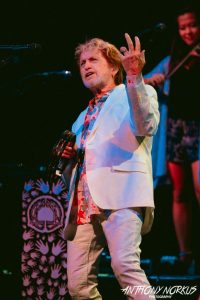 All of it was transformed in the hands of the malleable eight-piece band backing him. While the current version of Yes tries to recreate its classic sound, Anderson has decided to reinvent it, and with great success.

The show kicked off with Yes’s biggest hit, “Owner of a Lonely Heart.” With two keyboards, two percussionists and violin, there was plenty of sound to go around, and that was before Billy Meethers began wailing on baritone sax.

The show was off and running, and it led into “Yours Is No Disgrace.” Guitarist Tommy Calton pulled off all the famous Steve Howe licks, aided and abetted by Meethers on soprano sax and Jocelyn Hsu on violin, before the song took on a reggae lilt. Yes dabbled a bit in such sounds on “The Ladder,” but hearing a chestnut like, “Yours Is No Disgrace” reimagined in such a way was something else again.

And it wouldn’t be the last time.

Throughout the night, whether on Yes tracks, material he did with Vangelis (“State of Independence,” which was also covered by Donna Summer!) or material from Anderson’s new “1000 Hands,” the band swung back and forth from progressive rock drama to Calypso rhythms. And it worked.

A DISTINCTIVE VOICE THAT WAS STRONG AND STEADY THROUGHOUT

“Sweet Dreams” with a soprano saxophone? Violinist Jocelyn Hsu strumming a ukulele? Meethers switching from bari to soprano sax to flute, all in one tune? Why not?

Anderson turns 75 this year, but that distinctive voice was strong and steady all night long. Seemingly the only concession to age was when he took a breather, leaving the band to perform one instrumental before an intermission.

The tune was, of all things, “The Chicken,” made most famous by bassist Jaco Pastorius. With a band that drew members from Pastorius’s home base in south Florida, maybe it wasn’t that much of a surprise. Bassist Michael Franklin took the first solo, and Joe Cosas completely abandoned his keyboard for trombone as he and Meethers led the band through the funky rhythms. 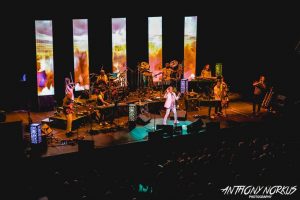 Throughout the night, the rhythms of drummer Rayford Griffin (Jean-Luc Ponty, Anderson Ponty Band) and percussionist Steady Joseph kept things moving. Cosas switched from keyboards to trombone to guitar to dobro to harp (!), while Calton adapted Steve Howe’s lines into his own. Album producer and Anderson’s musical director Michael Franklin was content to mostly provide the backing synth sounds, though his few solo spots showcased his nimble fingers.

Other highlights included an abbreviated version of “America,” Yes’ nod to Paul Simon, “First Born Leaders” and “WDMCF” from Anderson’s new album, and a reggae-ified, mostly acoustic treatment of “Long Distance Runaround.” Throughout the show, the new arrangements showcased the band’s and the songs’ versatility. Anderson had plenty of vocal help as well, since everyone save Griffin sang backing vocals at one time or another.

The audience erupted for “Starship Trooper,” one of the Yes’ most-loved songs. The five vertical video backgrounds, which had showcased different images all night, lit up with various topographic scenes from Yes artist Roger Dean’s phantasmagorical imaginings for Yes albums. Hsu’s searing violin provided another dimension to the song.

After bows, the band didn’t even leave the stage before the obligatory encore of “Roundabout.”

By now, the crowd was on its feet, and stayed there until the soothing sounds of “Soon.” The audience gave Anderson and company one final standing ovation before heading out into the night. 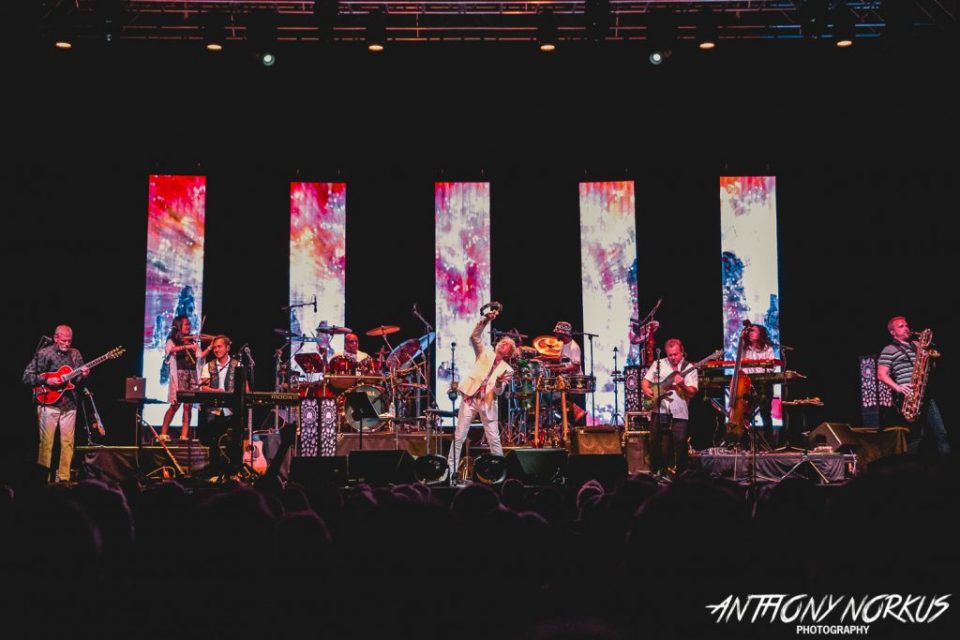 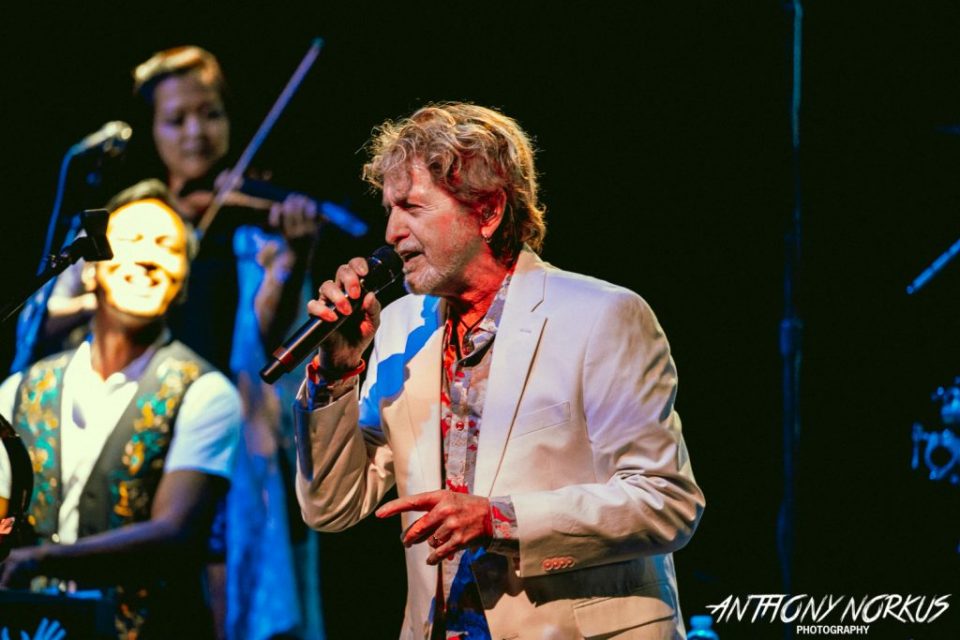 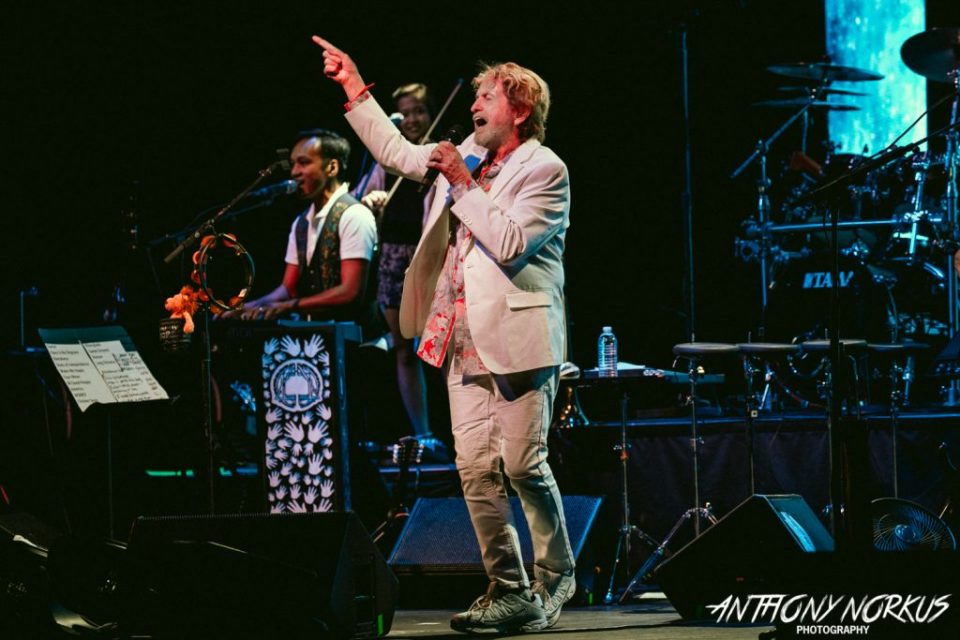 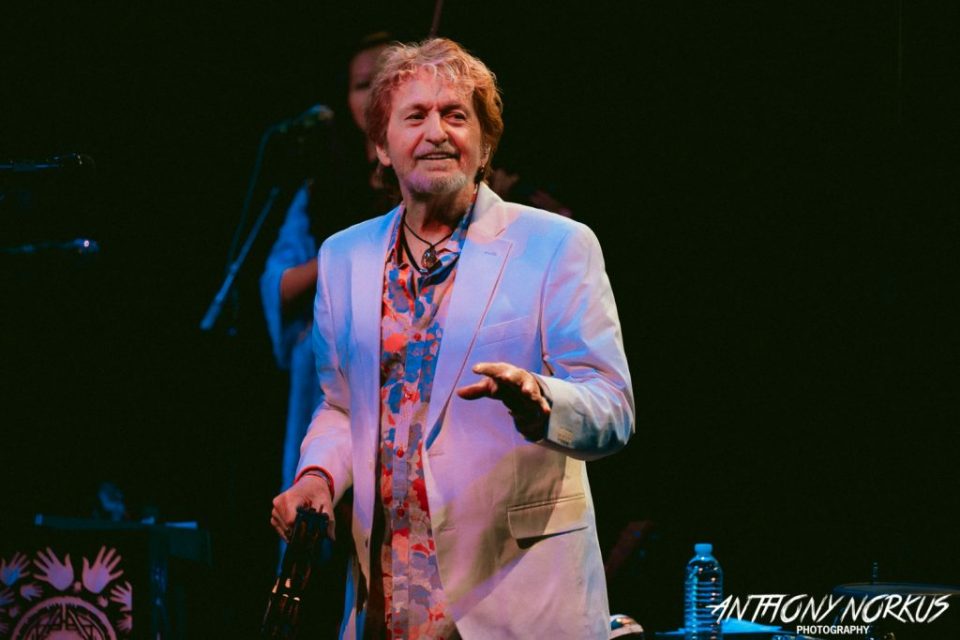 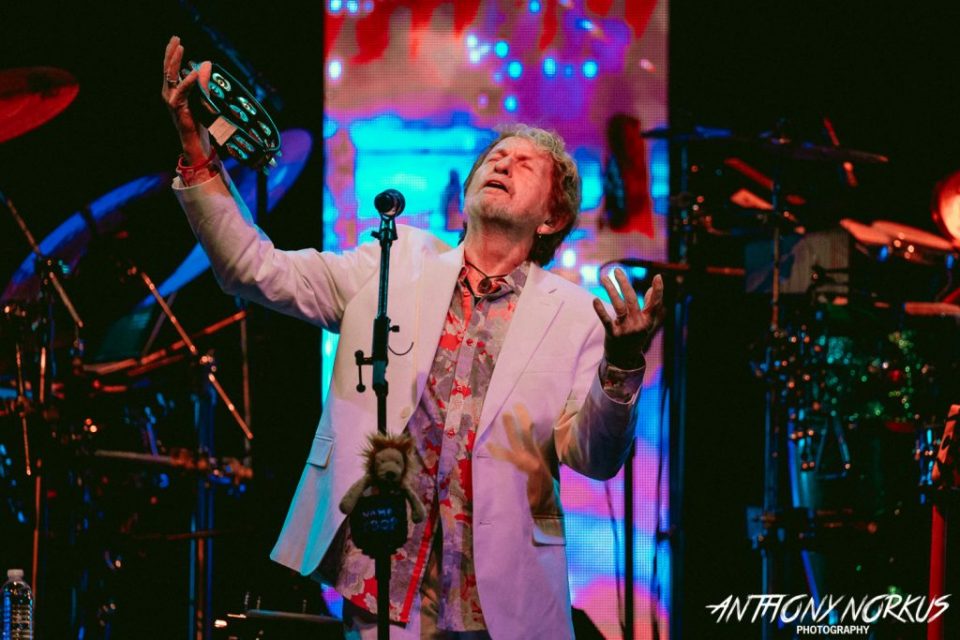 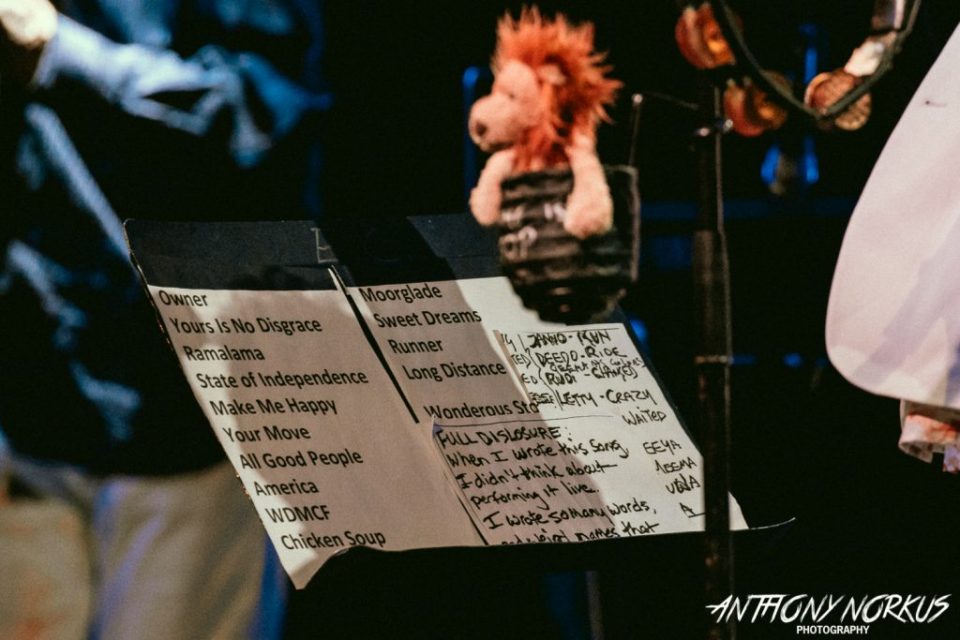 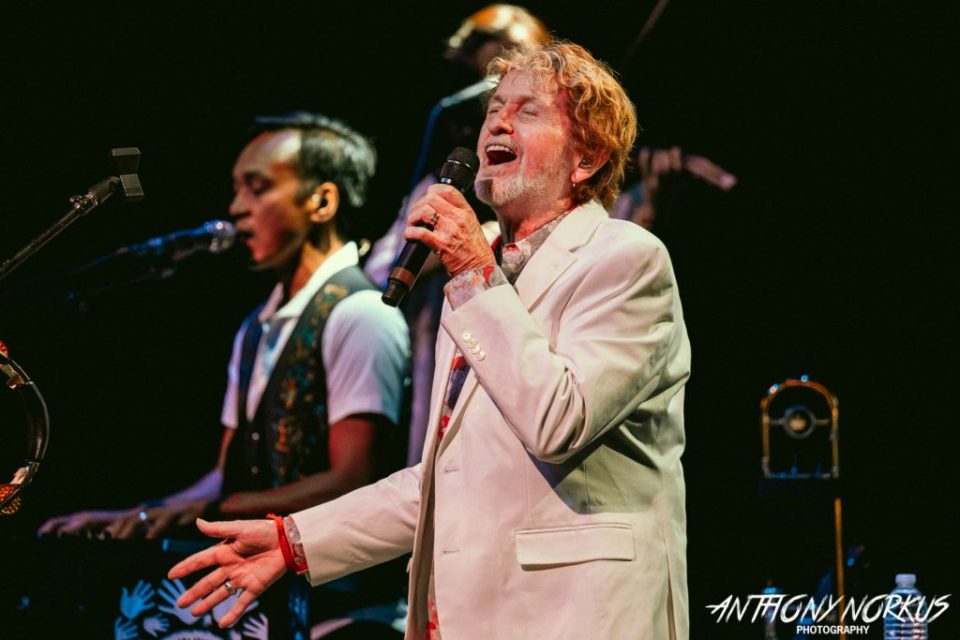 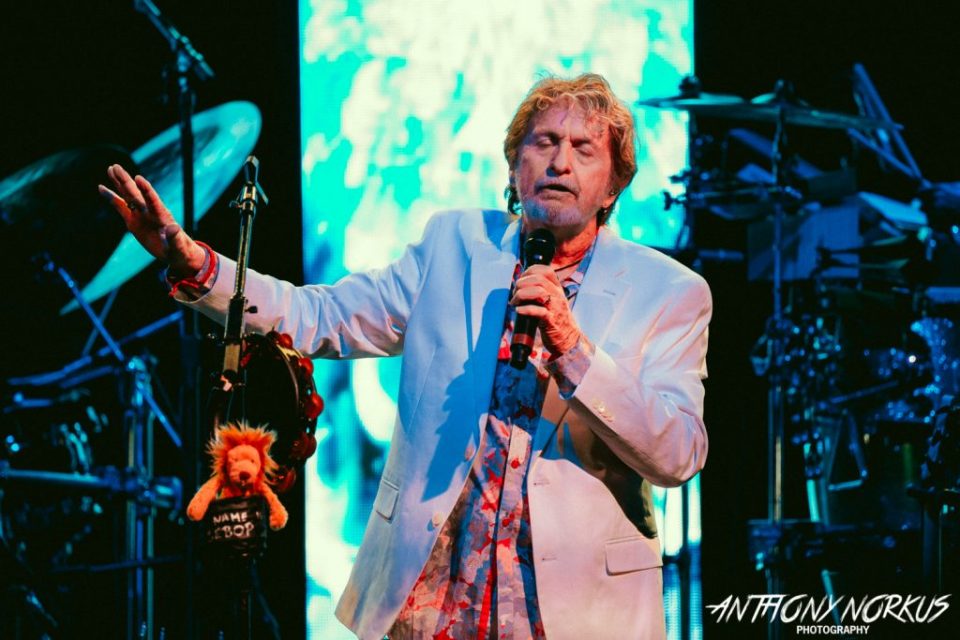 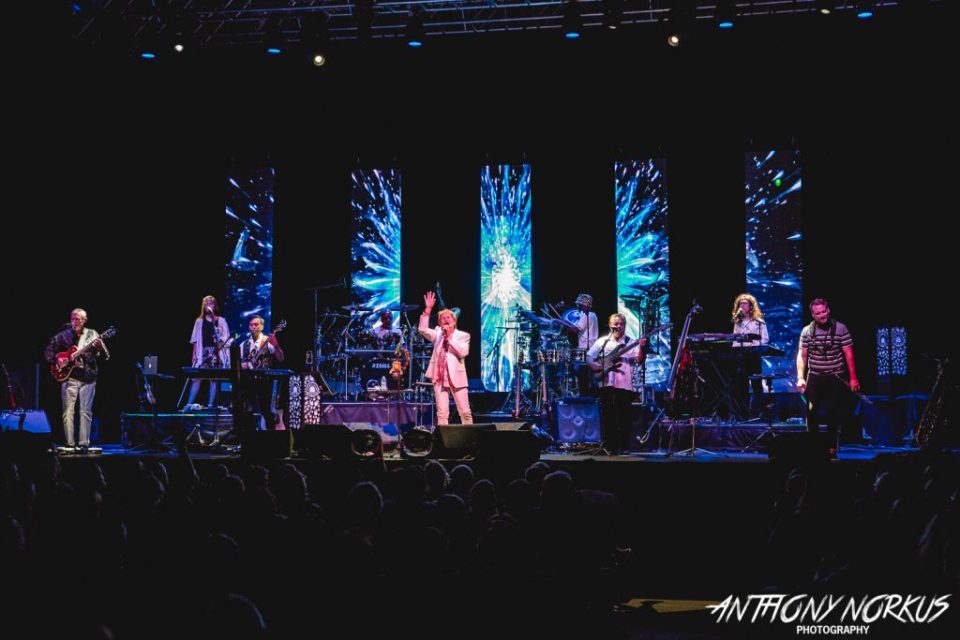 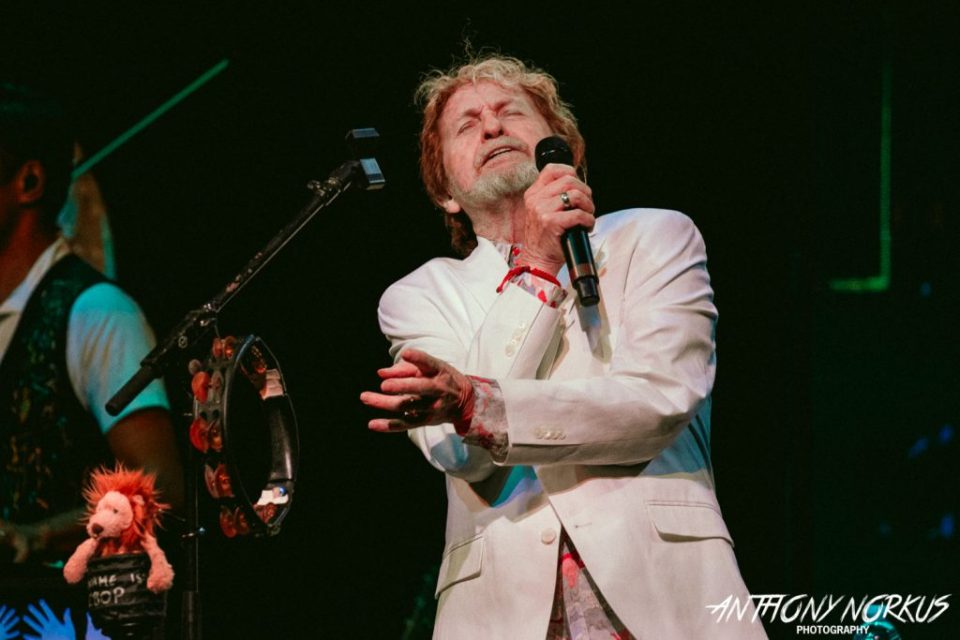 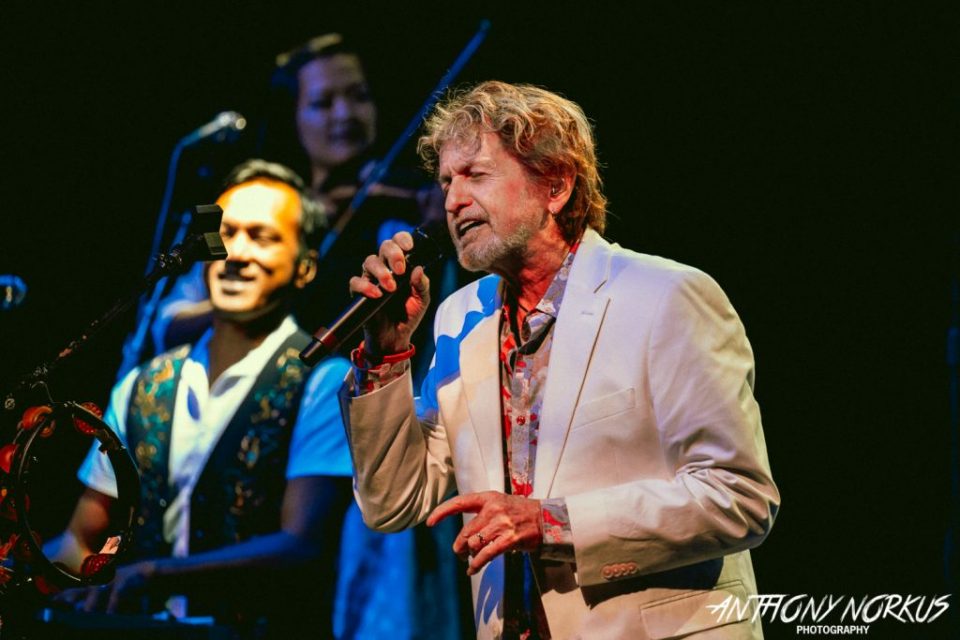 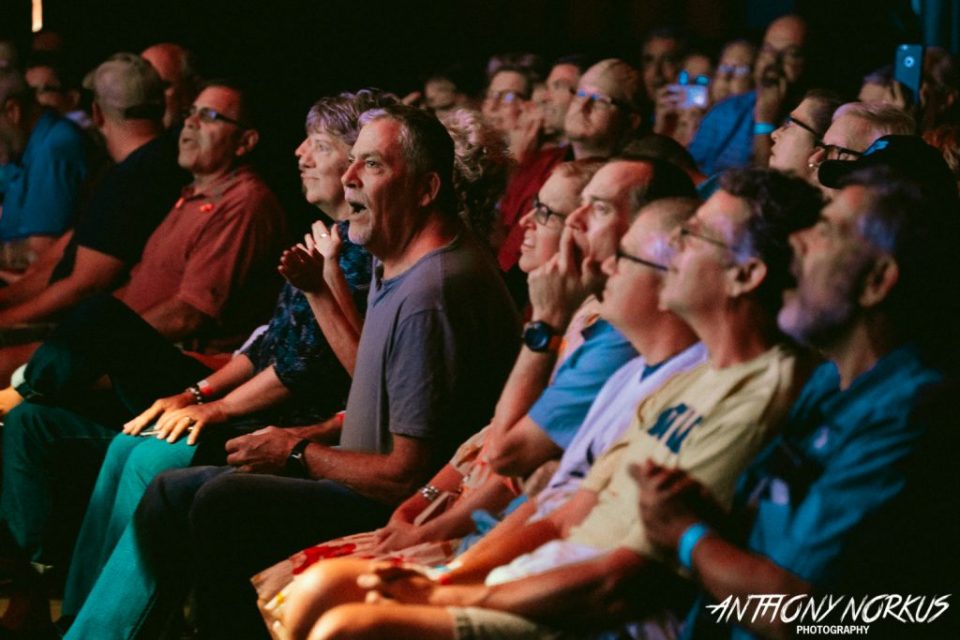 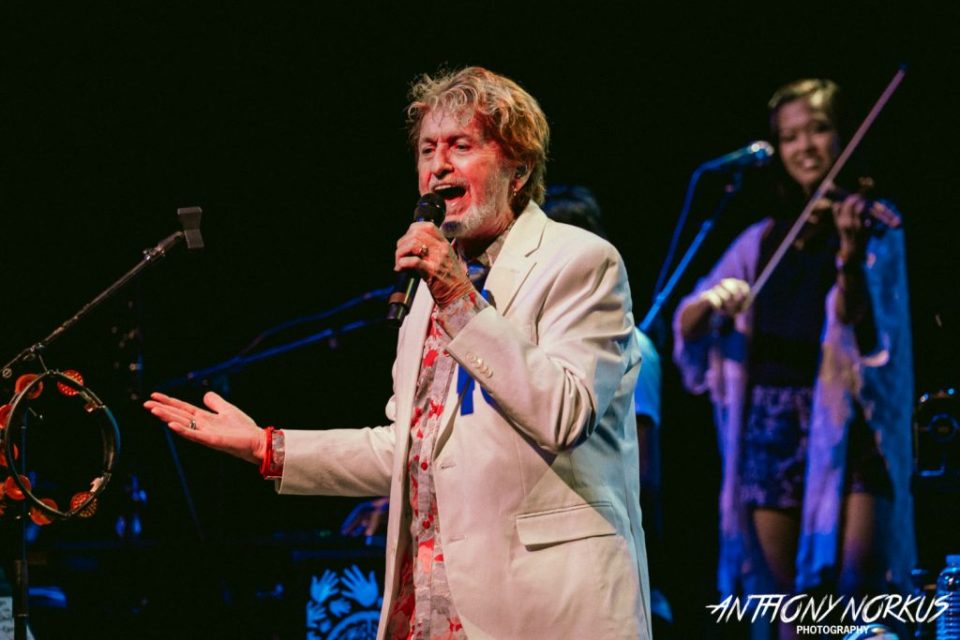 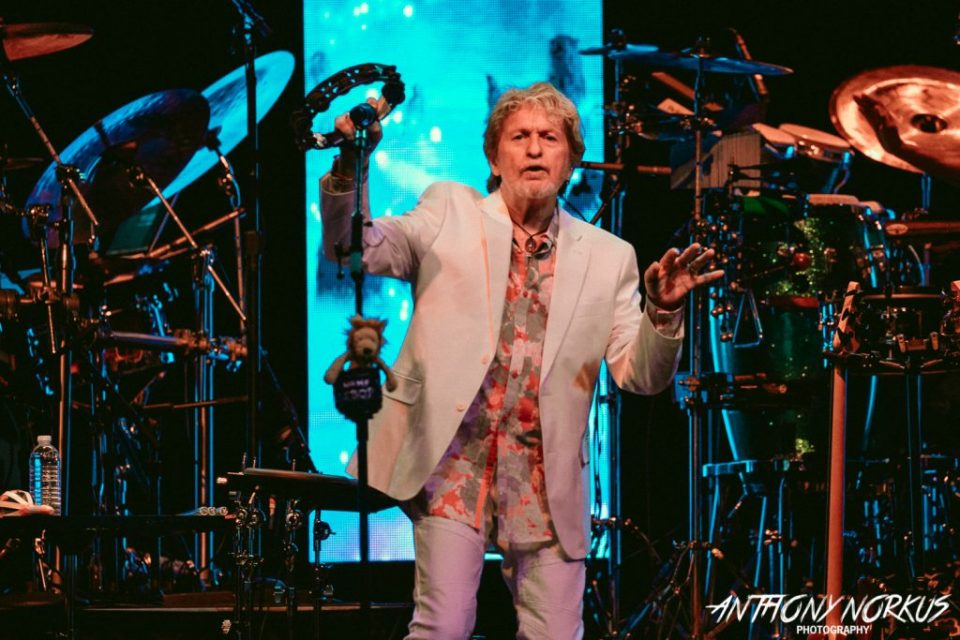 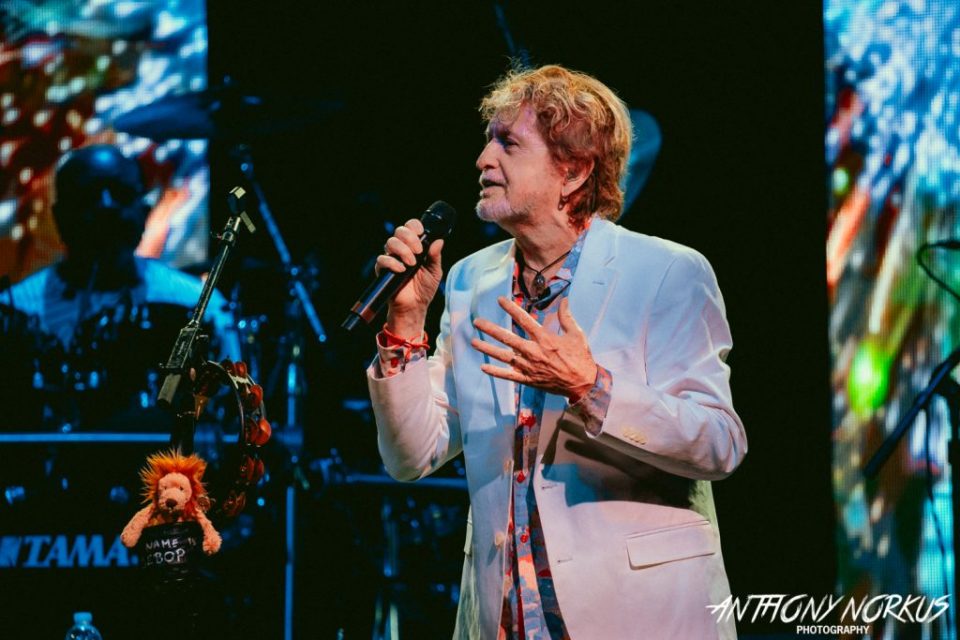 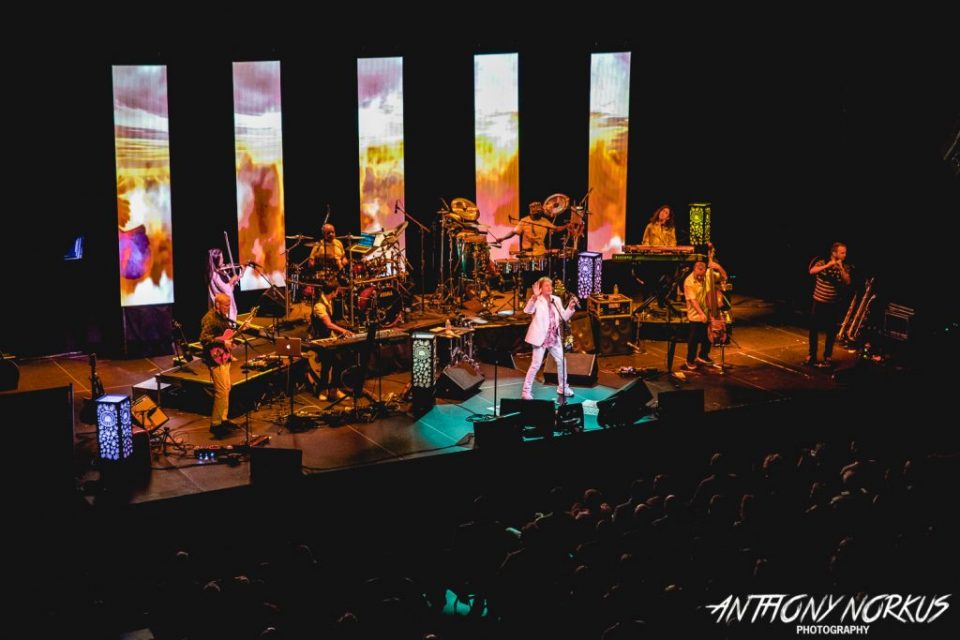 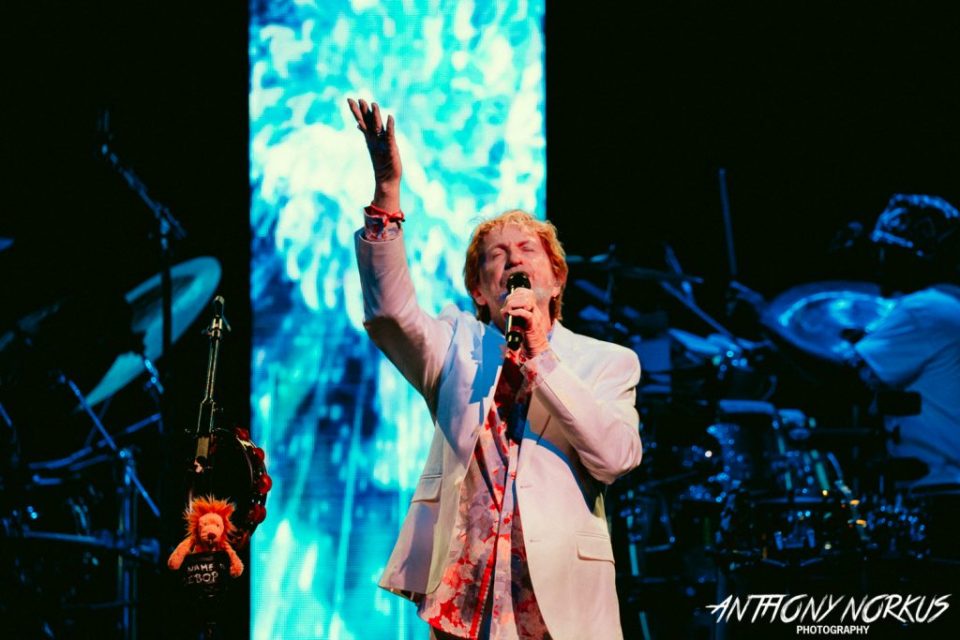