Local Spins exclusively premieres the video from northern Michigan’s Jake Allen. Plus check out new videos from other Michigan artists, including a May Erlewine song that got the attention of Bonnie Raitt. 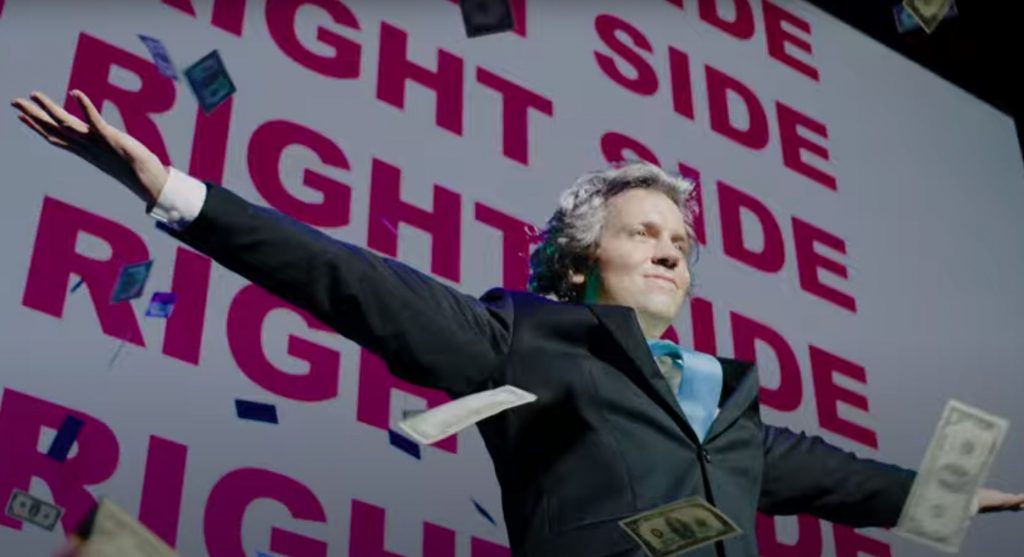 Con Man: “Jerry Allen” in the new Jake Allen video for “On the Run” debuting today at Local Spins.

For the second single from his lush and impressive new prog-pop album, “Affirmation Day,” Jake Allen wanted to create a video that depicted “the subtle and overt forms of con artistry we witness within the world” with a “Bonnie and Cyde-like trickster duo” that preys on distracted victims.

“I’m not a conspiracy theorist,” Allen says, “but I don’t doubt we are under many more spells than we realize.”

Shot on a shoestring budget around Lewiston, Gaylord, Johannesburg and Pestoskey over one-and-a-half days, the video for “On the Run” unfurls as an entertaining tale starring “somewhat comical villains” who take advantage of some unsuspecting victims.

“The project was a bit of a detour away from the normal ‘universe’ I’ve built around my music,” Allen explains.

“I let myself break my own rules and got into this concept based in a very realistic world with cars, money, politics; a place I usually don’t associate my music with. But it felt right for a song that’s about a perpetual identity crisis.”

The singer and acclaimed fingerstyle guitarist said he partnered with Local Spins to release the video — directed by Allen and Traverse City’s Jake Burgess — before the upcoming November election due to the political satire inherent in the story.

Allen’s fourth studio album was released Oct. 16 on his own label, Jake Allen Music, with distribution by Six Degrees Records. Check out the Local Spins review of “Affirmation Day” here.

VIDEO: Jake Allen, “On the Run”

Allen’s video is among several new videos released in October by West Michigan artists with new music to spotlight. Check out others below.

VIDEO: May Erlewine, “For the Change”

Ok, this isn’t a music video per se — just a way to listen to Michigan songbird May Erlewine’s timely new single, “For the Change,” timed as a pre-election, get-out-the-vote anthem. Not only does it feature striking backing vocals by Beth Nielsen Chapman (with Joe Hettinga, Caleb Elzinga, Michael Shimmin and Theo Katzman on board) but the song quickly got the attention of the legendary Bonnie Raitt who took to social media to promote Erlewine’s song as well as as tracks by Rosanne Cash, Maren Morris and Black Eyed Peas/Jennifer Hudson. Raitt wrote that she shared the “extraordinary songs/videos that speak so powerfully to some of the reasons this election is the most important of our lives.”

VIDEO: The Dave Marean Band, “Goes to My Head”

This video features a track from The Dave Marean Band’s 2020 EP, “Time Piece.”

Grand Rapids hip hop artist Lady Ace Boogie was joined at Dogtown Studios by Lokella and Callab for this “alternative” rendition of the track, “Stand Alone.” By the way, Callab will stage a release show for his latest album on Friday (Oct. 30) at Studio Park in downtown Grand Rapids. (The show was rescheduled from Oct. 23 due to weather concerns.)

Inspired by the book, “Be Here Now,” Brent Godfrey said he found the philosophy of Ram Dass to be of real benefit during the COVID-19 pandemic — appreciating all that’s around him while trying not to be distracted by “the political turmoil.” The song features Godfrey on vocals, cigar-box guitar and drum loop editing, with James Fraser on bass and Kris Pride on backing vocals.