After taking 2020 off due to COVID, Saturday’s afternoon event will boast performances by 46 bands in ‘some pretty unconventional places.’ The preview and schedule. 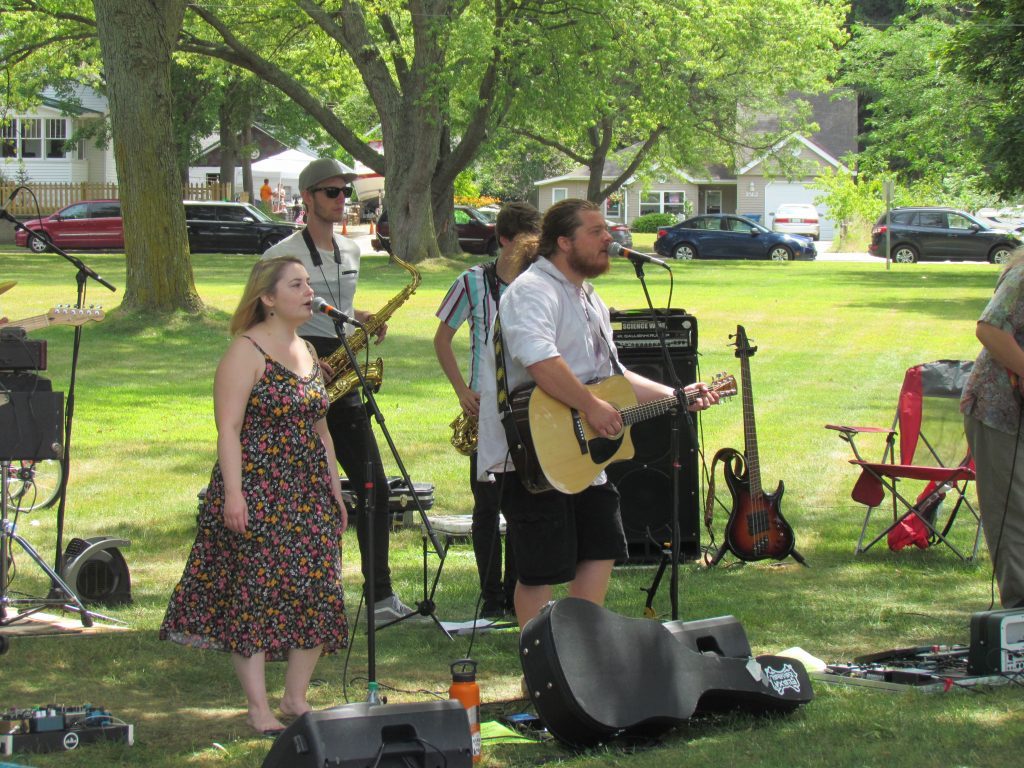 Back for Walk the Beat: Stone Soup & The Broken Teeth shown performing at the 2019 event. (Photo/Matt Marn)

SCROLL DOWN FOR WALK THE BEAT SCHEDULE

Like so many other music events and festivals in 2020, Grand Haven’s Walk the Beat was forced to take a COVID hiatus last year from its popular but unusual band competition and music showcase.

But on Saturday afternoon – a week after huge crowds flooded the lakeshore city for resumption of the Coast Guard Festival – Walk the Beat will be back, with 46 bands playing more than 20 sites on the city’s East Side, all vying for fan votes that could earn them 40 hours of recording time as the grand prize. 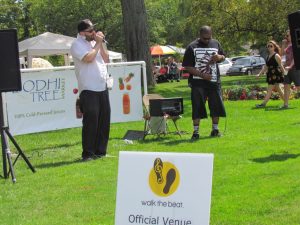 “We were on the edge of a public park, next to a restaurant, on a perfect summer day. We had such a great time playing outdoors, which is not our normal situation.

“My favorite part of the event is how surreal it is to have live music around every corner; you can catch something blowing in on the wind and follow it down the street and find a band that you had never seen before doing what they do best.”

Indeed, that’s the idea behind the one-day festival founded by David Palmer and now led by Bob Moore.

Not only does the event taking place from 1 to 5 p.m. Saturday spotlight a diverse array of regional talent but it also showcases a variety of businesses who host “stages” – from auto-repair shops to eateries to bars and more. Fans stroll from site to site listening to performers and voting for their favorites.

The band collecting the most votes will win 40 hours of recording time at Grand Haven’s Third Coast Recording Co.

A RAFFLE AND PERFORMANCES IN AN ‘OPEN-AIR COMMUNITY ENVIRONMENT’

Fans also can purchase raffle tickets, with a $5,000 grand prize and $10,000 in door prizes at stake. The annual event raises money to help young musicians get lessons, instruments and performance opportunities, as well as assisting local public school music programs.

The 2021 festival will boast performances by well-known acts such as The Moonrays, The Fast Hands Band, James Reeser & The Backseat Drivers, Benzing Graves Collective, Feeding Grizzlies, FlyLiteGemini, Asamu Johnson & The Associates of the Blues, Dalmatian Stone, Rachel Curtis Band and Tomas Esparza Blues Band, as well as a bevy of lesser-known emerging groups.

“I’m looking forward to this event,” said Esparza, who played the first Walk the Beat in 2015 and who’ll play City Auto Body at 3 p.m. Saturday, following a 1 p.m. set by Stone Soup & The Broken Teeth. 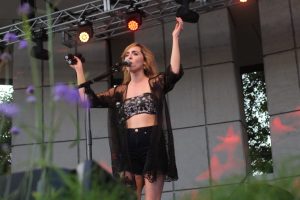 “We will showcase several of our original numbers and some blues standards with a twist of arrangement. The audience will hear what I’m trying to create: a Grand Rapids blues sound.”

Grand Rapids singer-songwriter Jamie Brackman will do double-duty on Saturday, playing a set at 1 p.m. at Redi Rental with Jared Tuitel, then joining progressive folk outfit Stoney Mountain Band at 3 p.m. at the same location.

Brackman said he loves “the open-air community environment” of Walk the Beat. “It’s fun to see people come out to support music in some pretty unconventional places.”

For first-time performers such as Lansing singer and one-time “American Idol” contestant Rachel Curtis, Saturday’s event offers an opportunity to “play my music for new ears on the west side of the state.” Curtis and her band plan to unfurl a mix of covers and originals, including her latest pop-hued releases, “I Don’t Like It” and “Strobe Lights.”

The Fast Hands Band from Grand Rapids makes its Walk the Beat debut on Saturday as well, calling it “a unique event to the area” that allows the group “to reach new people, take in other acts and just be part of such a great event on what is hopefully a beautiful weekend in Grand Haven.” 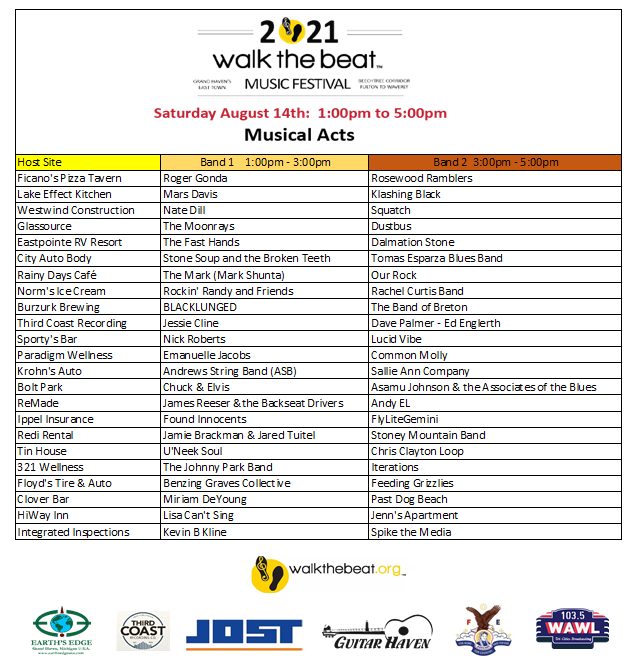