COVID-19 concerns are wreaking havoc with free community concerts in cities across the region, with some delaying shows and others canceling summer series, sometimes sparking angry reactions. 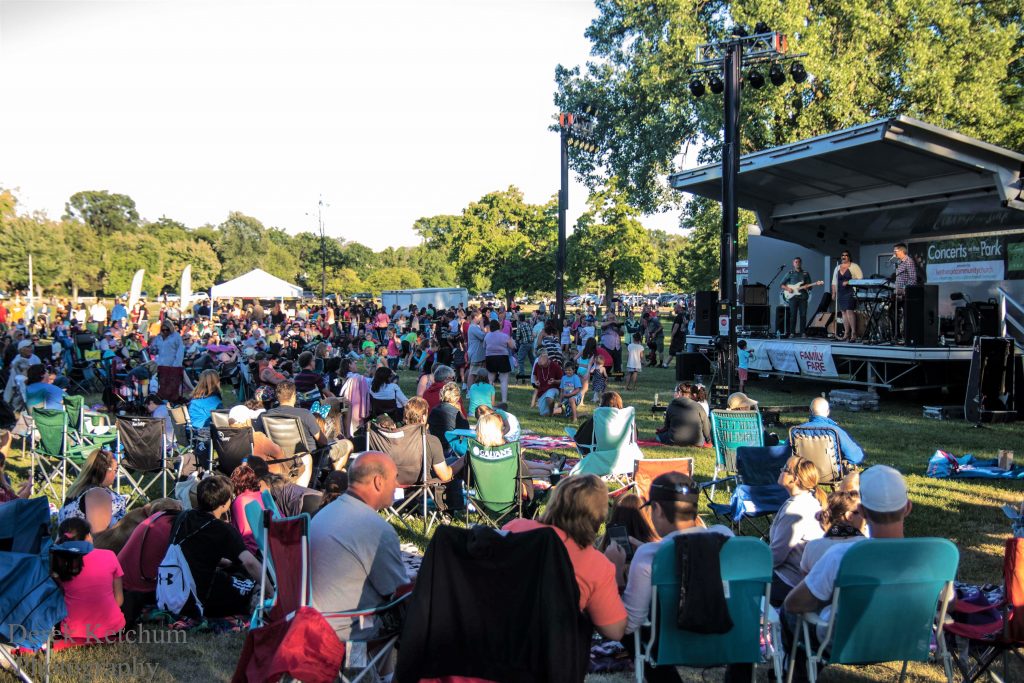 Not in 2020: Wyoming’s Concerts in the Park won’t take place this summer at Lamar Park due to COVID-19. (Photo/Derek Ketchum)

While Gov. Gretchen Whitmer announced Monday that restaurants and other businesses in northern Michigan and the Upper Peninsula may reopen as early as Friday (May 22), continued uncertainty, safety issues and rapidly changing conditions have forced concert organizers to make some difficult decisions to curtail or cancel their free series across the Lower Peninsula.

Some series have yet to make a call at all even though Memorial Day is right around the corner. Others, such as Rockford’s Rogue River Blues Series and Lowell’s Sizzlin’ Summer Concerts, have delayed the start of their annual weeknight concerts featuring regional stars until July, giving them more time to make a final decision.

Wyoming, South Haven, West Michigan Jazz Society’s “Jazz in the Park” and others have followed the lead of many summer festivals in canceling altogether. Even Grand Haven’s Coast Guard Festival and Walk the Beat (which takes place with local and regional acts in August) announced this week they would drop their 2020 events.

“Ultimately, we’re evaluating if we can make adjustments to the concerts to allow for physical distancing,” Drwencke said. “We expect to continue conversations over the next few weeks.” 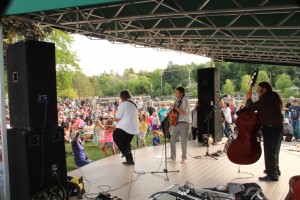 While some concerts are playing a waiting game, others are attacking the situation largely as planned, with some adjustments to keep audiences safe while enjoying the music.

Patty Williams, producer of the Sounds of Summer concert series in Cutlerville, said preparation for summer concerts begins early. That means calling off performances may undo planning done months prior to the shows. For Sounds of Summer, Williams worked with Byron Township to get the go-ahead for the series, but since then, developments in social-distancing, mask wearing and closures have changed the scene.

Despite these circumstances, Williams plans to hold the series, which kicks off in July. She also acknowledged that the pandemic is hard on everyone involved in hosting summer concerts — from the audience to bands to organizers.

“I am anticipating a great crowd,” Williams said. “Not only because of the fact everyone is anxious to get out and enjoy the normal life again, but also the musicians have taken quite a blow with their cancelled concerts.”

Other concert series, especially those with earlier kickoff dates, had little flexibility in making decisions.

Steve Jazwiec said it was difficult to announce the postponement of the series he organizes, the United Bank River Blues Series in Rockford. With four shows through June 30 canceled, Jazwiec said he still hopes to continue performances in July thanks to sponsorship collaboration.

Jazwiec said series organizers often have little power in the decisions they make regarding their concerts. In Rockford, city-distributed event permits and sponsorship limitations play into the feasibility of hosting a concert series amid a public health crisis.

“I feel like it’s a waiting game,” Jazwiec said. “It’s like Tom Petty (says), ‘Waiting is the hardest part.’ I was going to wait until May 1, but then everyone else was canceling much bigger events than us. It’s pretty much out of my hands. I can worry about it and be stressed about it, but it’s not my decision.”

CANCELING ‘A HARD DECISION’ BUT UNAVOIDABLE FOR SOME

Wyoming canceled its entire Concerts in the Park series for the summer, a popular Tuesday night event in the community. When the announcement was made on Facebook, some angry community members took to social media to complain. Others supported the decision.

“This is crazy. It’s outdoors,” one commenter wrote. “This is plain dumb. Whose decision was this?”

“Extreme to cancel for the whole summer,” wrote another.

“I know this was a hard decision, but you made the correct one,” another wrote. I’m sorry to miss them this summer, but we will plan to come next year. Thank you for all the planning and work you do each year so we can all enjoy the concerts.”

Community Enrichment Committee Chair Renee Gardner said her goal was to try to preserve the series. But with an audience that is older and more prone to contract COVID-19, the safest decision was to cancel to protect the community, her team and performers, Gardner said. 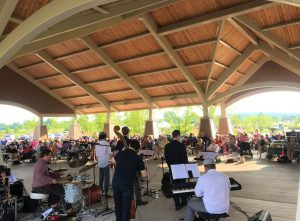 Jazz in the Park: This would have been the second year for the Monday jazz shows at Millennium Park Meadows but the series is canceled. (Photo/Autumn Babas)

“We have a great base of about 200 people that come no matter if it’s raining or shining,” Gardner said. “That demographic is above the age of 55, and that’s the target age. I don’t want to put my concertgoers at risk as well. I don’t want anyone to get sick because of enjoying a free event.”

While some members of the community questioned the decision, Gardner said the support of others has motivated her team to look into options to continue to provide music to Wyoming — either through a one-off concert in the fall or by preparing for next year’s festivities.

“Overall, our main concertgoers were really supportive,” Gardner said. “(Seeing that support) solidified my decision. My vice chair and I did not want to cancel. We fought hard, we thought about different scenarios, but the bottom line is that we don’t know what’s going to happen. Then having all of those positive comments go, ‘We get it. We’ll see you next year.’ That just really helped us go, ‘OK, we made the right decision.’”

Marketing and Communications Chair Jake Vanderheyden said WMJS and Jazz in the Park are largely supported by donor subscriptions, which trickled off due to the pandemic. Between a cut in funding and the loss of a premier summer series, Vanderheyden said the situation reflects the strain put on the music industry as a whole.

“We really need our community to invest in musicians, to invest in the society because if we don’t do it right now, it won’t be there when we get back,” Vanderheyden said.

Relax at Rosa, organized by Downtown Grand Rapids, opted for a flexible approach, moving its noon Thursday concerts online until they’re able to safely be held in person. Event coordinator Megan Catcho said that Relax at Rosa was meant to be a community-driven event, encouraging local businesses to take a break from the day and support Grand Rapids-based food trucks.

The switch to online meant Downtown Grand Rapids had to preserve that sentiment in a digital format. Between Facebook live-streaming and giving away gift cards to food trucks, Catcho said her team was satisfied with its adaptability.

“It was kind of a no-brainer,” Catcho said. “We have this money set aside, we’re ready to help support these businesses and performers, and we still want to bring this sense of community to Grand Rapids and the people of Grand Rapids. How can we do that from their homes?”

The only factor holding Relax at Rosa back are changing regulations. Because of the unpredictability, Catcho said the team is looking forward to in-person performances, but are unsure of when they will come. Still, she wanted to make sure the event was able to support the community and businesses, which is more important now than ever.

“Right now, we are in recovery and support,” Catcho said. “For us to still be able to support those performers and those food trucks that are small business owners was huge. That’s why we (paid) the full performance fee.”

Jazwiec said he is willing to fight for live music because it is part of the prescription the community will need when the time comes for healing together.

Check out the current list of outdoor community concerts that are still on the docket: Free Outdoor Community Concerts 2020 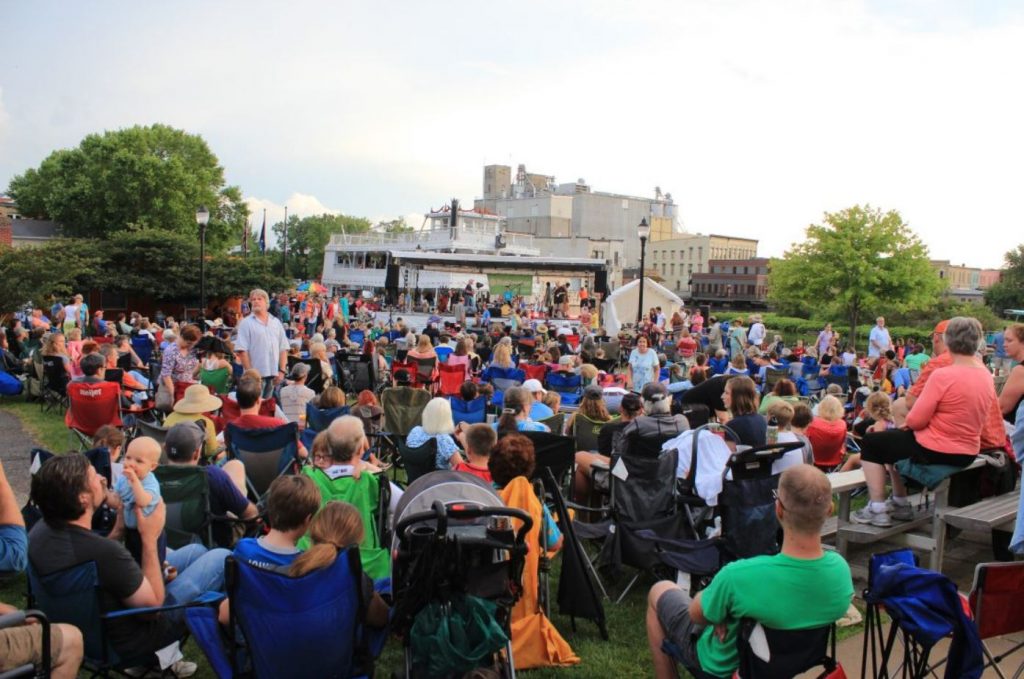