The Colorado jamgrass faves who play Bell’s Saturday boast strong West Michigan roots and say they’re in it for the long haul. Check out the Local Spins Artist Spotlight feature and videos. 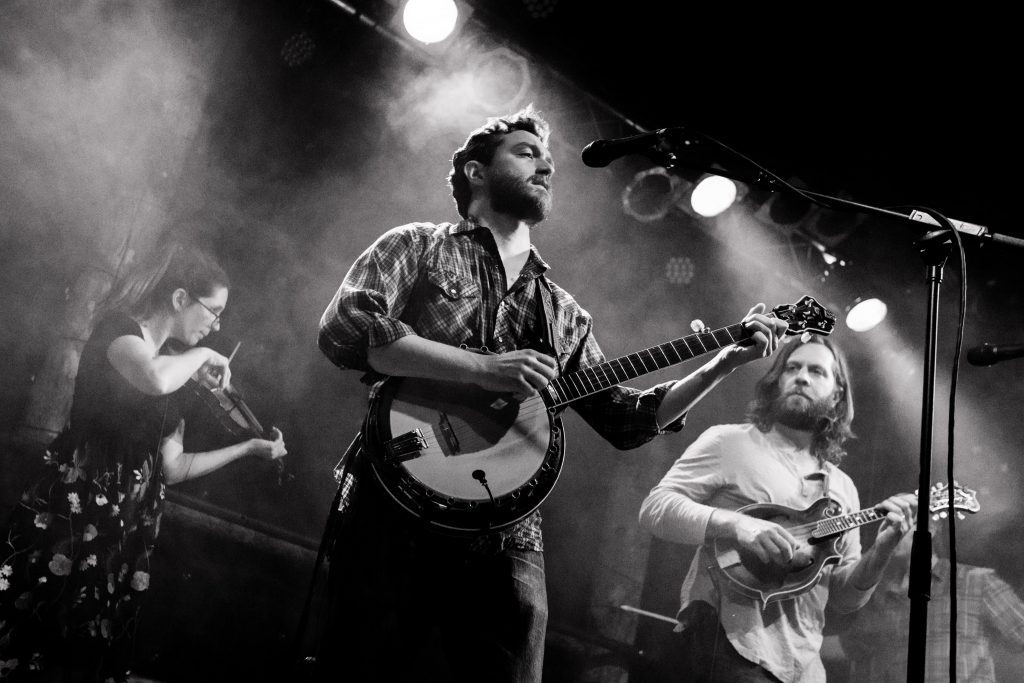 THE BAND: Trout Steak Revival
THE MUSIC: Jamgrass/Americana
WHERE YOU CAN SEE THE BAND: 8:30 p.m. Saturday (April 6) at Bell’s Eccentric Cafe in Kalamazoo, with Celestial

Speaking from telephone on a rainy day in Fayetteville, Ark., last week, it was just another day on the road for Trout Steak Revival’s Travis McNamara. 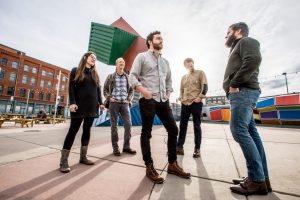 ‘Everyone Has Been Writing’: The band is working on a set of ‘great new tunes.’ (Photo/Tobin Voggesser)

“Prior to this it was beautiful,” he said. “We were in Tulsa, Okla., yesterday and had a couple hours off and I was walking around town. There were crocuses coming out and buds coming up. It was awesome.”

Such is spring. And such is the life as a musician as the tour bus rolls from one city to the next.

For McNamara and his Trout Steak bandmates that meant on to Missouri and then up into Illinois, over to Ohio and then onward to Kalamazoo where the band will close out their spring tour at Bell’s Brewery Eccentric Café on Saturday night.

For the banjo-plucking McNamara, along with the dobro/guitar-playing Will Koster, the trip to Southwest Michigan also resembles a bit of a homecoming. McNamara, who was raised in Grand Rapids, and Koster, reared in nearby Kent City, have been friends since the two were 11 years old.

FROM A SUMMER CAMP IN NEWAYGO TO A TELLURIDE TITLE

“Will is one of my oldest friends,” McNamara said. “We were campers at the same summer camp, Camp Henry in Newaygo. We would water-ski at camp and sneak out of cabins and go hang out with girls and stuff. Then in college we ended up being camp counselors there.” 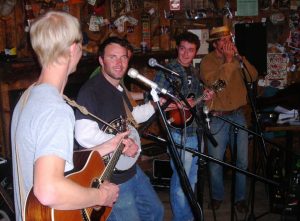 The Formative Years: Trout Steak Revival at the Bucksnort Saloon.

That’s where the two first met bassist Casey Houlihan of Kenosha, Wis., a fellow counselor. Late-night picking sessions between the three of them led to a fast-forged friendship. A few years later, they rendezvoused in Colorado, where all three moved after college, along with Houlihan’s college buddy, mandolinist Steve Foltz, a fellow Wisconsinite who attended the University of Minnesota with Houlihan.

“Everyone just kind of migrated out there, and we started playing music together out at the Bucksnort Saloon in Sinks Park, Colo.,” McNamara said. “I like to say it’s the greatest and worst bar in America. It’s basically a gutted-out cabin that they put a bar in out in the middle of nowhere in a town of like 800, and we were the house band for a bit.”

Still, the four, along with fiddler Bevin Foley — a Colorado native who joined up a few years later — began to make a name for themselves quickly in the Rocky Mountains. After releasing a pair of independent records in 2010 and 2012, the quintet captured the coveted Telluride Bluegrass Festival band competition trophy in 2014, earning them a spot on the festival bill the following year. They followed that with their two strongest albums to date, 2015’s “Brighter Every Day” and 2017’s “Spirit to the Sea.”

The band has continued to climb festival lineups since. They’ll appear at this summer’s Hoxeyville Music Festival in Wellston, Mich. — along with other major national festivals such as Northwest String Summit, Floyd Fest and Bluegrass in the Bottoms.

They returned to the studio at Mighty Fine Productions in Denver this winter and have plans to finish their next album later this summer and release it in the fall. 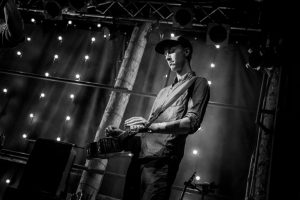 “We’re a band of five songwriters and everyone has been writing,” McNamara said. “We’ve got a bunch of great new tunes that we have been working on and road testing in little secret markets. I’m really excited. There’s going to be some darker stuff on there, some more exploratory stuff, some sweet stuff. We’ll see how it feels once it’s all put together. It’s definitely coming to take shape a bit.”

The sound, McNamara said, continues to evolve as the band grows together and independently of one another, and perhaps most importantly for them as well as their fans, is an honest one.

“The further we get into songwriting the more I want it to resonate with my own life and come from my own lived experience,” he said. “I don’t want to write a song about running a still because I’ve never run a still and I’m probably not going to.”

He also may be a little less likely to write about running a still as admittedly, he doesn’t really listen to a lot of bluegrass music.

“We play so much of it, and that’s the world that we travel in,” McNamara said. “It’s the opening bands that are playing before us, it’s the bands we are opening for, it’s the festivals that we go to. I get enough bluegrass in my life. When I listen to music, I am looking for other things. I love Radiohead, I love D’Angelo, I’ve been listening to Bonobo and Flying Lotus and I just try to hear other things. That’s the music I listen to that ends up speaking to me.”

‘LONGEVITY IS THE NAME OF THE GAME’

There’s no question that Trout Steak’s own brand of music has been speaking to others, however, and songs like “Brighter Every Day” and “The Light” are some of the most uplifting jamgrass songs being played on stages across the country, as well as a reason why the band’s fan base continues to get energized and grow at each stop.

Logging around 120 dates a year, McNamara is well aware there are other bands on the scene tearing up the pavement at a much faster clip, but for he and his bandmates doing a few less gigs is all by design. 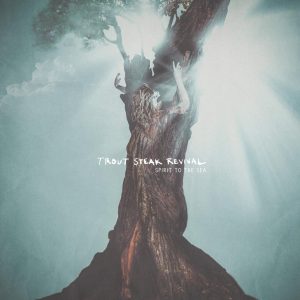 “Longevity is the name of the game for us,” he said. “We are trying to stay emotionally, mentally, physically and creatively happy, and trying to maintain good relationships back home.

“More power to bands that are out there doing 200 shows a year. They are road dogs, man. It’s hard living that much on the road … we’re not scared of working hard, but we’ve got to balance it all out.”

And as spring tour winds to a close, McNamara couldn’t be happier that it’s happening just down the road from where he grew up.

“I’m stoked to get back and see everyone,” he said. “I wish we could get back to Grand Rapids and Kalamazoo more, because I just love it here. We’ve got a bunch of buddies in Michigan that have always been real supportive, and my parents are going to come down. Plus, I grew up drinking Bell’s. They were kind of the first craft beer that I knew, and I have very fond memories of that.”

Tickets for Saturday’s show, available at bellsbeer.com, are $12 in advance and $15 day of show.