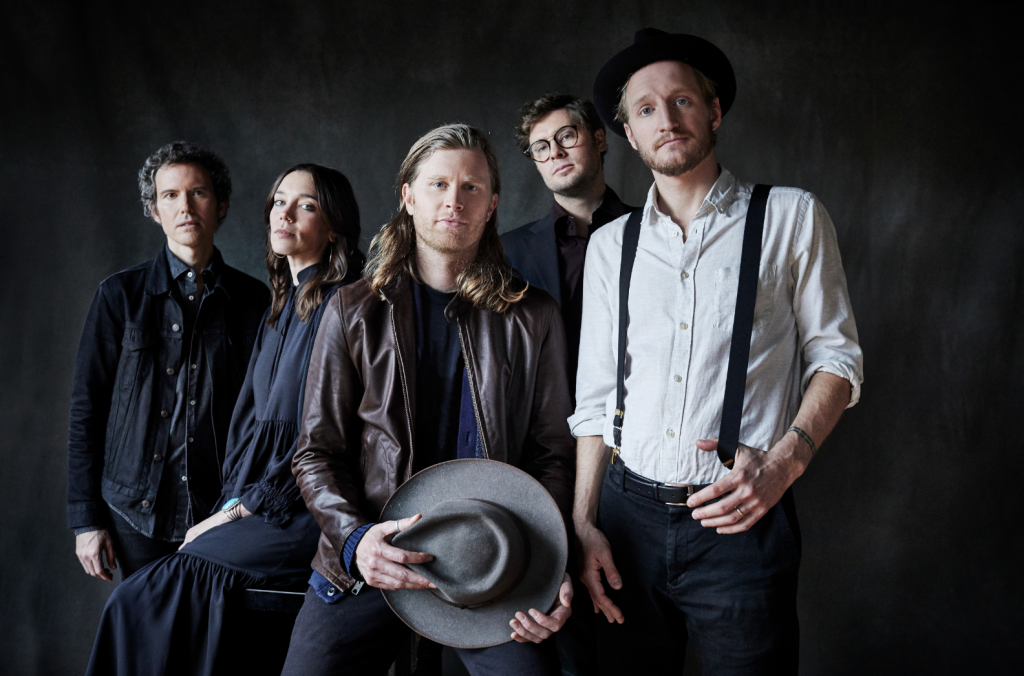 Touring Behind Their Third Album: The Lumineers make a stop at Van Andel Arena on Tuesday. (Courtesy Photo)

For a time, it was hard to go anywhere without hearing the beginning strums and shouts of the song, “Ho Hey,” followed by its catchy refrain.

The Lumineers swiftly took over the music world with their debut self-titled album and its adored single that dominated the previous decade. During the indie-folk band’s meteoric rise, it toured nonstop, surfed endless airwaves and sold millions of records. 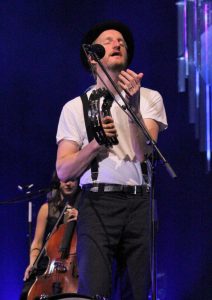 The band’s latest album, “III,” takes a conceptual approach. It’s comprised of a powerful collection of episodic EPs and is accompanied by a short film. The album grapples with topics of addiction through a family of characters, the Sparks, some of whom are based on individuals close to the band members themselves.

The multi-instrumentalist, who goes by Jer for short, spoke over the phone while on a windy walk in Asheville, N.C., covering topics that ranged from fame to fatherhood and film to sandwiches.

Local Spins: Hey Jer, could you set the scene? Where are you right now and what else do you have going on besides this interview today?
Jer: I’m in Asheville right now. We’ve been rehearsing. We’re really excited. These are probably the biggest shows we’re playing as a headlining band in the United States.

Local Spins: You recently had a birthday. How did you spend it?
Jer: Actually, it was pretty cool. We were in L.A. I went into the rehearsal space and I didn’t see anybody. I was like, ‘What the hell, where is everyone?’ I just started playing the piano, not really paying attention and the whole band and entire crew came out with a birthday cake and they were singing ‘Happy Birthday.’ It made me feel good, like something special was happening even though we were about to rehearse in a windowless rehearsal space in L.A.

Local Spins: What’s it like to have your family on tour?
Jer: It really changes everything. It’s great though. It’s a totally different atmosphere. Wes has a son about the same age as mine, so they’re both out which is really cool. I think it adds a levity to tour, like a lightness. When the little children are walking around, they put a smile on people’s faces. 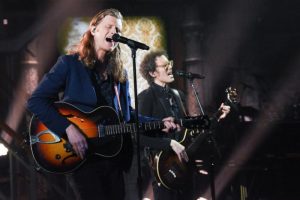 ‘Interesting Terrain to Navigate’: Lumineers have had to deal with the ups and downs of success. (Courtesy Photo)

Local Spins: In a previous interview, you guys mentioned that one of the most difficult things you had to go through was success. Could you expound on that a bit?
Jer: For me, I think it kind of messed with my head a little bit. When you see a lot of success quickly, it can just be hard to manage. Whether you want to admit it or not, you’re changing, and whether you want to admit it or not, people around you are changing. Even the way people interact with you. Now you’re in this big band or famous band or whatever you want to call it. At times, people maybe look at you differently or treat you differently, and that in and of itself is not necessarily a bad thing, I think it’s just you have to come to grips with it or come to terms with it. That doesn’t mean becoming a dick or having an ego or anything. But you do have to acknowledge these changes are pretty massive, and hopefully, you’re evolving and maturing instead of devolving and letting it ruin you. It’s interesting terrain to navigate.

Local Spins: What keeps you grounded and sane while on-tour?
Jer: There are a couple things. I do still like to write a lot of music or play a lot of music in the hotel room on a keyboard or guitar. This last year, I got really into playing computer games. I’ll bring a laptop out with me and play a game and it’s sort of this non-musical way to decompress, which I think for someone like me has been really healthy. Having my wife and son out now is great. I get off stage and it’s the most humbling thing in the world to see your son looking at you. 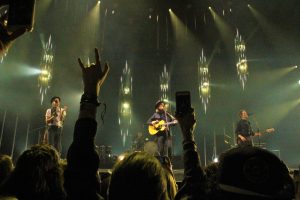 Returning to GR: The Lumineers on stage at Van Andel Arena in 2017. (Photo/Anna Sink)

Local Spins: The new album and accompanying film tackle addiction as one of its main elements. How do you hope it moves that topic forward?
Jer: I think one hope I have is that people can talk about it more. Addiction is a really nasty thing. Wes wrote about this amalgamation of characters, the main one being Gloria, who’s very much based on someone in his life who’s going through severe alcoholism. For me, it meant a lot because my older brother died of a heroin drug overdose when I was 14 or 15. He was 19 and he was my only sibling. The point of the album is not to be exploitative. This is very real stuff that affects a lot of people and that did affect me and Wes in different ways. I don’t think the point of the album is to say don’t drink, don’t do drugs. It’s more of telling stories and looking at how complicated addiction ism — loving someone who maybe is stealing from you or lying to you. You give them everything to save themselves and they still want to throw it all away. I think this album, subtly and kind of in a complicated manner, looks at all those complexities that exist when you love somebody who’s going through this addiction stuff.

Local Spins: How has becoming a father changed you?
Jer: It’s changed me in a lot of ways. I think maybe it’s made me a little bit happier or joyful. You start to see the world a little bit through the eyes of your child with this wonderment and curiosity that slowly gets taken out of you year after year of becoming an adult in society. It’s been really cool to see that. 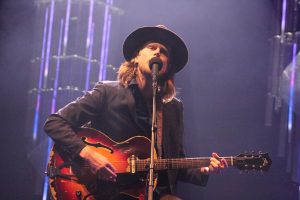 Chronicling the Effects of Addiction: The theme of “III.” (Photo/Anna Sink)

Local Spins: What are you watching right now?
Jer: I’m actually watching ‘Heroes,’ which was on NBC a while ago. The last movie I watched was ‘Joker.’ I bought it and within a 24-hour period I watched it twice on my iPad. I just remember I was absolutely floored by how beautiful the soundtrack was. And I think the woman who wrote it won an Oscar for the original soundtrack. I think it’s mostly based around the cello and some other strings. It made the movie so good. It reminds me sadly that nobody’s just 100 percent evil, and the best characters are always the ones that have that complexity. You’re like, ‘Man, the Joker kind of got shit on by a lot of people, he’s a victim, too.’ And no doubt he does terrible things in the movie, but I love that complexity where you feel for the guy and you almost can’t blame him for the way he turned out in the end.

Local Spins: Noticed you’re a fan of sandwiches. What’s your go-to sandwich?
Jer: There’s this sandwich from this place in Denver. I think it’s called The Local. It’s like chicken, avocado and mayo, maybe some lettuce. It’s just a quick takeaway sandwich. If a buffalo chicken wrap could be could be considered a sandwich, that’s my favorite in the world.

VIDEO: The Lumineers, “Life in the City”