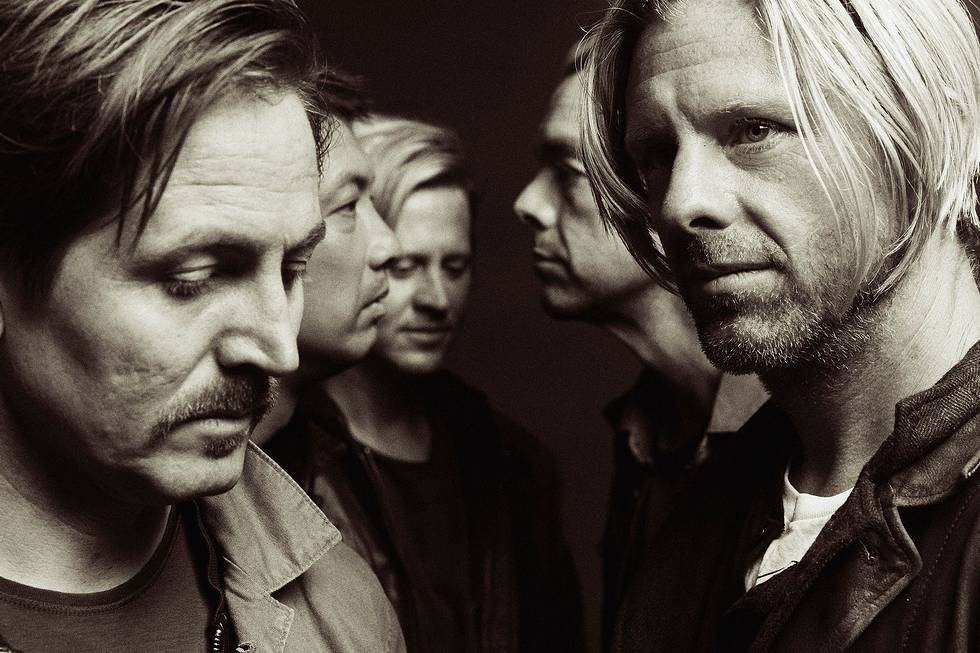 Back in Grand Rapids: Switchfoot’s 20-years-plus journey as a band has resumed with a U.S. tour.

SCROLL DOWN FOR “NATIVE TONGUE” VIDEO

The year is 2003. Apple has launched iTunes. The world is introduced to Captain Jack Sparrow. Boot-cut jeans and cargo pants provide both style and comfort. And you can’t go far without hearing “Meant to Live” rattle through somebody’s Grand Am radio speakers with its panned electric guitar intro and soaring choruses.

With its release of “A Beautiful Letdown,” Switchfoot exploded onto the national scene. The shaggy-haired surfers from California signed to Columbia Records, sold millions of records, took over radio and MTV, and won the hearts of fans around the world.

Switchfoot is an enigma: Over the course of 23 years the band has churned out 11 albums, won a Grammy, made a movie and toured the globe — all with its original five members (Jon Foreman, Tim Foreman, Chad Butler, Jerome Fontamillis and Drew Shirley). 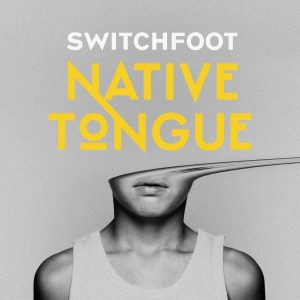 The band’s newest album, “Native Tongue,” (featuring artwork from Grand Rapids native Jordan Wetherbee) was released in January after a year-long hiatus, and includes a national tour that will bring the San Diego rock band to 20 Monroe Live at 7:15 p.m. Saturday, with Colony House and Tyson Motsenbocker also on the bill. Tickets are $38-$75 and available online here.

Local Spins caught up with Tim Foreman, who plays bass in the band and is one of the founding members along with his brother, frontman Jon Foreman, and drummer Chad Butler.

In a hallway backstage at Pittsburgh’s Carnegie of Homestead Music Hall, with a large cup of coffee described in such a way that the aroma seemed to almost drift through the phone, Foreman recalls the band’s catapult to mainstream success, savoring time at home during the hiatus, and keeping the band together for more than 20 years.

Local Spins: How does it feel to back on the road after the band’s hiatus?
Tim Foreman: Man, it feels so good. I think anytime you can push pause on something you’ve done for a while, it can give you a new perspective and appreciation. I just feel very thankful. Thankful to be doing what I love, and to get to do it with people that I love.

Local Spins: How did you use your time off at home?
Tim Foreman: I’ve got a family and the ocean is also very important to me when I’m home. The beginning of the hiatus was really building in a lot of time for those two pursuits, and what surprised me was just how much I really missed music very soon into the hiatus. So I started playing a lot of music as well, either my piano at home or my guitars. Then I started sneaking into the studio and writing, but it wasn’t for the purpose of any project, it was just for the joy of it. I started discovering little clues that my brother had been doing the same exact thing. So we started writing together, maybe half a year into the hiatus. We started writing a ton, but not for the goal of making an album. We didn’t really know what we were doing, other than it was bringing us joy and we were following it.

Toward the end of summer approaching the one-year mark on the hiatus, we wrote this song called “Native Tongue” that felt like a concept that could galvanize a lot of these other songs we’d written throughout the year. It felt like a theme to kind of build around. I think from that point on, the rest of the record kind of fell into place really quickly. The idea of getting back out and hand delivering these songs to the people who have been with us on this journey felt like a really exciting idea. (Scroll down for “Native Tongue” video.) 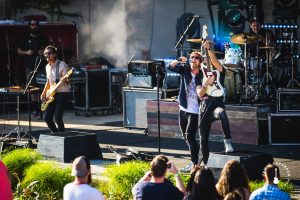 On Stage: Switchfoot played a sold-out show at Meijer Gardens in 2017. (Photo/Jamie Geysbeek)

Local Spins: How is living in the San Diego area different from the rest of the country?
Tim Foreman: The ocean is my favorite part of San Diego. For me, that can look like a variety of different things. I love to surf, so when there’s waves that’s my favorite thing in the world. And when there’s not, I also love diving. Yesterday when I was home I went lobster diving because there weren’t any waves. And I can’t describe to people who don’t experience that just what a gift it is to slip beneath the surface of the ocean and discover an entirely new world. One that’s been there all along, but most people will never see it. The mystery and just how large it is and how undivided it is, will never get old to me.

Local Spins: Do you remember what the early days of the band felt like? Particularly your first headlining tour and all the craziness during that time?
Tim Foreman: A lot of thoughts come to mind. I think first, to have other people connect with your music is an incredible experience. Because these songs for us, they’re not just songs, they’re not just a good time — they actually mean a great deal to us. We put a lot of meaning and purpose into what we write. So, to connect with other people on that level through the songs was a big honor. And it doesn’t always feel like that, especially in the early days when you’re playing small clubs and sometime there’s people there and sometimes there’s not. So to feel that really start to resonate and connect was an amazing feeling.

And I think there also another side of that: As a band, you spend so much time trying to light a fuse, a match, a spark, and then suddenly the fire leaps out of the fireplace and starts burning the house down. And we had to adjust to that as well. It went from a spark and people starting to resonate with us, to flying all over the world and this crazy blur of dealing with newfound fame and trying to adjust — as brothers to one another, as husbands — and to find a new normal. And to maintain who we were in the craziness. So there were some growing pains there for sure. You have to learn to not believe the hype, whether it’s good or bad, because it can be both, but either one can be really damaging. To really surround yourself with people who really know who you are and will tell you when you’re not being yourself, just to kind of have those compasses, because it’s really easy to get lost.

Local Spins: Was there ever a time that you questioned if you should be doing music?
Tim Foreman: I think it’s healthy to always question what you’re doing. I questioned it all the time and I still do. Not in a weird way, but I think that’s an important part of the process of being human, you know, taking stock of where you’re at and where you where and where you’re headed, and making sure those all still feel good. I think the weird things that come along with fame, for lack of a better word, is something I wouldn’t wish on anybody. We always wanted the music to forge a connection and a conversation. And that was something that really excited us — the community that can exist through songs.

Local Spins: You’ve dealt with some negative physical impacts of playing music, like carpal tunnel syndrome from playing bass. Have you noticed any other negative effects of touring or playing music – physically, mentally or even relationally?
Tim Foreman: I think what it comes down to is friction, because friction can be good or bad. In the moment it’s always bad, right? Then you get a little further down the road and maybe you’ve learned something from it, and maybe you’re better off because of the friction. With having carpal tunnel, I ended up raising my strap up a little bit from our punk rock days and the carpal tunnel went away. So you adjust. And I feel like fortunately, we’re in a place as band where we’re able to look at all the highs and lows of our journey and see moments where we’ve been carried by the other guys as well as moments where we carried them. There’s beauty in that bond that’s built through the friction and the struggles, and I wouldn’t trade any of it.

(Editors Note: Late last year, keyboardist Jerome Fontamillis was diagnosed with cancer and underwent surgery, which included the removal of a kidney. After a successful surgery, Fontamillis is now cancer-free and back on the road with band.) 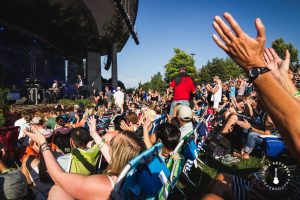 Connecting with Grand Rapids Fans: Switchfoot aims to do that again on Saturday. (Photo/Jamie Geysbeek)

Local Spins: What kind of effect did Jerome’s diagnosis have on the band?
Tim Foreman: Those life moments that we all have, with loved ones or maybe ourselves, dealing with life-altering or life-threading situations, it really brings what’s important into focus. It makes you thankful for what you have. It really lit a fire under me of wanting to make the most of every moment, which is a lot of what we put into our songs — you know, that’s a theme we sing about quite a bit. So to kind of sit with him on that journey was really heavy. It was a scary thing for all of us.

And to be on the other side, to have him come through with a fully successful surgery and to have him back out on the road, I can’t describe what a gift that is. It’s so easy to take those things for granted when everything is great, but when you’re faced with this really scary possibility, once you get to the other side it will never feel the same. Every time I see him on the bus, or on stage, it brings a new appreciation as to what a gift every day is for all of us. So in many ways this tour feels like a celebration of that: a celebration of Jerome being cancer-free and every day being full of possibilities.

Local Spins: Do you have any tour routines?
Tim Foreman: My favorite routine is to find a routine. Any routine at all on tour is better than no routine. You’re trying to establish some sort of anchor point to build off of. More me, getting some sort of exercise in whatever city I’m in is important. I usually jog. I’m not a big runner, but on tour it’s a good way to see a city. And I still love exploring and traveling. Most of these cities I’ve been to dozens and dozens of times by now. But there’s always new things to discover. So I think grabbing a pair of running shows, even if it’s 30 degrees outside like it is right now, it’ll feel warmer if you’re running.

Local Spins: Any content (books, movies, podcasts) you’re consuming right now?
Tim Foreman: With this cold weather I’ve been diving back into some old Sherlock Homes mysteries, which always kind of puts me into a cozy, kind of London vibe for cold weather.

Local Spins: Do you have a favorite song to play bass on during this tour?
Tim Foreman: The new album has been such a fun album to play live. Sometimes the songs uprise you in good ways and bad ways. And this tour has been a really amazing surprise because all of these new songs are working out great live. “Dig New Streams” is a song we’ve been working in and out of the set, and it’s such a different song for us. That’s always one I look forward to.