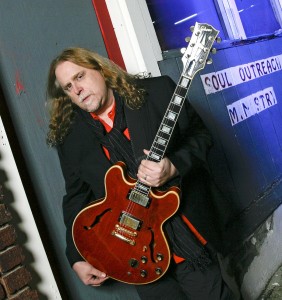 Gov’t Mule may have started as an Allman Brothers’ side project in the mid-1990s by guitarist Warren Haynes and late bassist Allen Woody, but it’s a full-fledged, full-bore touring powerhouse these days.

Haynes, a Rolling Magazine Top 25 guitarist of all time, has shared stages along with the way with icons ranging from Eric Clapton to Buddy Guy, and the band is making its only Michigan stop at Frederik Meijer Gardens & Sculpture Park on Thursday.

During a tour stop in his native North Carolina, Haynes took time out in the midst of the band’s current 2012 tour to talk with Spins on Music about the band’s growing legacy, its devoted fan base and a special upcoming “archival” release.

Q: I’ve often wondered how you juggle all your musical projects, between the Allman Brothers, Gov’t Mule, your own band and sitting with other groups. What takes priority?
A: Mule is the thing that works the most that demands most of our time and attention, but it’s really all the different camps working together and cooperating to make things as smooth as possible. Occasionally, you run into certain windows of time where more than one act wants to do something. We just have to figure it out. (Gov’t Mule plays Milwaukee’s Summerfest the day before the Grand Rapids show, followed by two more U.S. dates before heading to Europe in early July. Haynes then joins the Allman Brothers for about a month of shows through mid-August.)

Q: Naturally, there’s overlap between fans of all these groups. I’m guessing plenty of Allman Brothers’ fans also follow Gov’t Mule.
A: There is a lot of overlap, but I’m sure there are some people who are fans of one but not the other. I think the biggest difference is that Gov’t Mule is influenced by some music that came after the Allman Brothers. We don’t just limit our influences to pre-1969. The obvious difference is that the bands sound completely different because that’s what we wanted. We didn’t want a band that sounded the same as the band we were already in. 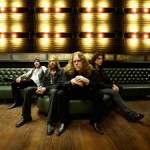 Q: Having seen you guys live, I’m impressed by the unique chemistry of this band. And is the idea behind a Gov’t Mule show that no two performances are ever alike?
A: We do a different set list every night. If we’re in a place for two or three nights, we won’t repeat anything over the two or three nights. A lot of people come back for two or three shows. It makes it exciting for sure. It’s what we prefer. It keeps us fresh. We don’t want to play the same thing every night anyway. It’s a bit of a challenge, but it’s one we’re up for. There are a lot of people I’ve met who say they’ve been to their 200th Gov’t Mule show. It’s quite a pleasant surprise for me. The Gov’t Mule fans are very hardcore in general.
There are songs that connect more than others. There are ones that the audiences is going to respond to and you try and include X amount of those per night. But you never know because this far down the line, this band’s been together 18 years, you never know what a fan is hoping for.
“Thorazine Shuffle,” “Mule,” “Blind Man in the Dark,” “Bad Little Doggie” and “Soulshine” get played more than the other because the audience kind of demands them more. Since every night is different, it’s an experiment to see how the set list is going to flow. Sometimes, we call an audible.

Q: Tell me a little bit about this archival Gov’t Mule release that’s planned later this year. I see on the Mule website you’re looking for old photos from fans.
A: There are three shows from 1996 that we’ll release in a very inexpensive bootleg box set. We went back and heard these three shows (recorded in Atlanta, Athens and Macon, Ga.) and they really capture the raw, visceral sound that Gov’t Mule had at that time. We were playing in smaller places to a smaller audience and the band was fresh and hungry. It’s a great three-show snapshot of where the band was at that time. It’s refreshing to hear it because I hadn’t heard it in so long and the band has evolved since then. But with all the space between me and those shows, it was really nice to revisit where the band was at that period. 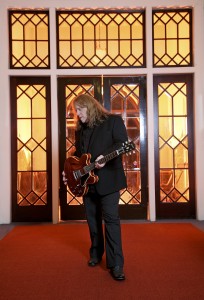 Haynes: "playing better ... and singing better" than ever. (Photo by Stewart O'Shields)

Q: You grew up in Asheville, N.C. Did you come from a musical family?
A: My dad is a good singer, but he never pursued it professionally. Both my older brothers are huge music fans and my older brother dabbled with the guitar, but they’re just more great fans with wonderful taste in music who turned me on to great music. When I was 12, I got my first guitar and started gravitating toward all the neighborhood kid musicians and meeting one friend who was a drummer and one who was a bass player and one who was a guitarist and learning to play together.

Q: Do you remember your first gig?
A: It was a walk-athon. It was great; it was a captive audience. They walked and at the end of the journey, they had to sit and listen to our band.

Q: Who were you inspired by at the time?
A: My first three heroes were Eric Clapton, Jimi Hendrix and Johnny Winter, in that order, chronologically. After that, I discovered everybody else that I grew to love. That’s what inspired me to play guitar in the first place. Prior to that, I had started singing based on my love of soul singers like Otis Redding, Wilson Pickett. When I discovered rock music is when I wanted to start playing guitar.

Q: Touring with country singer David Allen Coe starting when you were 20 years old must have been quite the experience. What did you learn from those years as a musician and a performer?
A: I think anytime you’re thrown into a situation you’re unfamiliar with, it’s going to be a learning experience. I had never played that kind of music before. I knew nothing of his music or his lifestyle or any of that, because I was quite young. It was quite a trial by fire. I’m sure every experience is a learning experience and anytime you’re with other talented musicians, you’re going to take something away from that.

Q: So you’ve had the chance to play with some of your heroes over the years. Which of these moments were most memorable?
A: I’ve been so fortunate that it’s almost too many to list. A couple of years ago, playing with Eric Clapton at the Allmans’ 40th anniversary was amazing. I’ve played with Bob Dylan, Johnny Winter, Billy Gibbons, B.B. King, Buddy Guy, Jeff Beck, so many of my heroes and the list is enormous and I’m very thankful for that.

Q: Do you think you’re more appreciative of your opportunities to play in front of fans and tour than you were when you were just starting out?
A: I feel basically the same way that I felt (then). I have the same kind of feeling and inspiration. I am very appreciative of the fact that I’ve been fortunate enough to be able to maintain a career after all these years. (But) it’s the same kind of feeling walking on stage. In some ways, you get better at it, you get more used to it and I’ve learned from every musical situation I’ve ever been in. I feel like I’m playing better than I ever have and singing better than I ever have.