Erlewine releases her new recording exclusively for Michigan fans first, playing release shows in Grand Rapids, Spring Lake, Kalamazoo and beyond. Get the back story and album review at Local Spins. 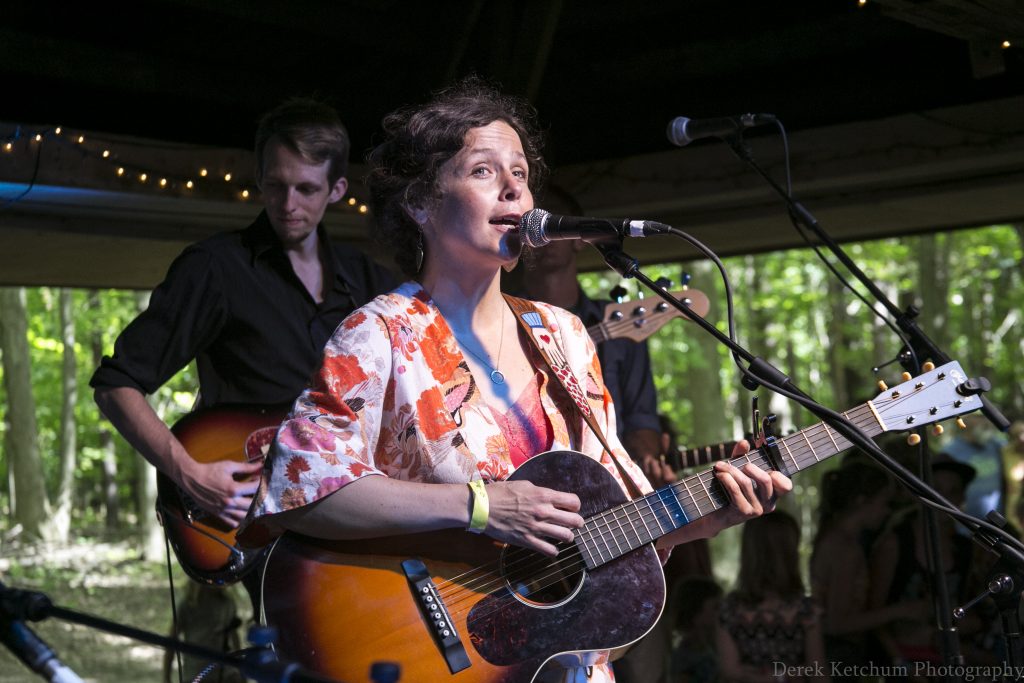 ‘A Soundtrack to Embrace it All’: May Erlewine’s new album boasts contributions from a unique set of musicians. (Photo/Derek Ketchum)

SCROLL DOWN FOR VIDEO OF THE SINGLE, “NEVER ONE THING”

Through more than a dozen albums over a 15-year career, singer-songwriter May Erlewine has emerged as the voice of Michigan’s indie-folk scene – a highly respected and collaborative artist whose thoughtful and powerful music already has inspired a generation of fans.

So, it’s no surprise that her latest album, “Mother Lion,” takes another step forward, incorporating support from a producer in the studio for the first time, bringing in a fresh lineup of backing musicians and reinforcing Erlewine’s belief in the healing power of music.

“It is born from triumphant tenderness and glorious vulnerability. We wanted to be bold in our efforts to feel,” Erlewine said of working with friend and producer Tyler Duncan.

“These times are made of love, anger, joy, sorrow, dissonance, harmony, compassion, rebellion, grief, healing, togetherness, isolation. We wanted to build a soundtrack to embrace it all, especially those feelings that don’t have a lot of room to be in our society.”

The Big Rapids native who lives in the Traverse City area will host a series of album-release shows in Michigan this month, starting with a show Friday at Bay Theatre in Suttons Bay and followed by a concert at 8 p.m. Saturday at St. Cecilia Music Center, 24 Ransom Ave. NE, in Grand Rapids. Tickets for the Grand Rapids show are $20 in advance or $25 at the door; get tickets and details online at mayerlewine.com/events.

She’ll follow that with several more shows across Michigan, including an Oct. 14 appearance at Bell’s Brewery Eccentric Café in Kalamazoo and an Oct. 19 concert at the Seven Steps Up listening room in Spring Lake (as well as tour stops in Ann Arbor, Cadillac, Lake Orion and East Lansing). Get tickets for the Bell’s show online at bellsbeer.com, with tickets for the intimate Seven Steps Up show at pindropconcerts.com.

After limiting October release of the album in her home state, Erlewine plans to digitally release the recording nationally on Nov. 1.

“I wanted to release it in Michigan because this is my home and I wanted to share it with my statewide supporters. I’m still a bit analog in my thinking, and the tangible act of handing the record to my community felt really good,” she said.

“I am working hard to get Mother Lion to as many ears as possible. I have a beautiful team of people lifting the music up as well as my community sharing and supporting the record.”

‘GIVING VOICE TO THE TIMES’ WITH BOOST FROM MEMBERS OF VULFPECK

The new album, which Erlewine describes as “giving voice to the times in a deeply emotional sense,” boasts contributions from several musicians with the Ann Arbor-based funk band Vulfpeck – Theo Katzman, Joe Dart and Woody Goss – as well as singers Lindsay Lou Rilko of Lindsay Lou & The Flatbellys, Antwaun Stanley and others.

“It’s funny. We didn’t wake up one morning and say, ‘Hey, let’s make a May record with a Vulfpeck backing,’ ” she explained. “We actually spent months picking the musicians that fit the mission. We slowly arrived at each musician, one at a time, with a lot of intention. It ended up that three of them are from the ‘Vulfscape,’ but that was not why they were asked.

‘Lucky to be a Musician in Michigan’: May Erlewine

“It was because of their incredible sensitivity and also their level of interest in the project and the songs. This album certainly showcases their skill set. The band is a funky sensation/revolution, but to back that up, these are truly some of the best and most sensitive musicians that I have had the pleasure to play with.”

Erlewine said those songs are “very personal,” but also reach into “a very global grief. That is where the songs came from.”

“I have never performed with this combination and they were all chosen with great care to bring these songs to the stage,” she said, noting that it’s a much different outfit than her band, The Motivations, which creates “a wholesome, groovy dance party” that’s a departure from her usual folk approach.

Instead, the Michigan album-release shows for “Mother Lion” are described as “intimate, listening-room style shows.”

“I feel lucky to be a musician in Michigan. We have one of the most collaborative and passionate music scenes I have ever witnessed. I feel we are standing on the shoulders of some great work and walking down a generous path paved by our elders,” she said.

“I am hoping to serve and continue down the path with all of my heart and passion. I feel I am carrying a torch, and so I do so with care and intention. I am honored to stand on any stage and grateful for any open ear and open heart present.”

VIDEO: May Erlewine, “Never One Thing”