From folk to country to metal, this August round-up of new releases by Michigan artists covers the gamut, from The Outer Vibe to Westrin & Mowry. Check out the reviews and audio samples. 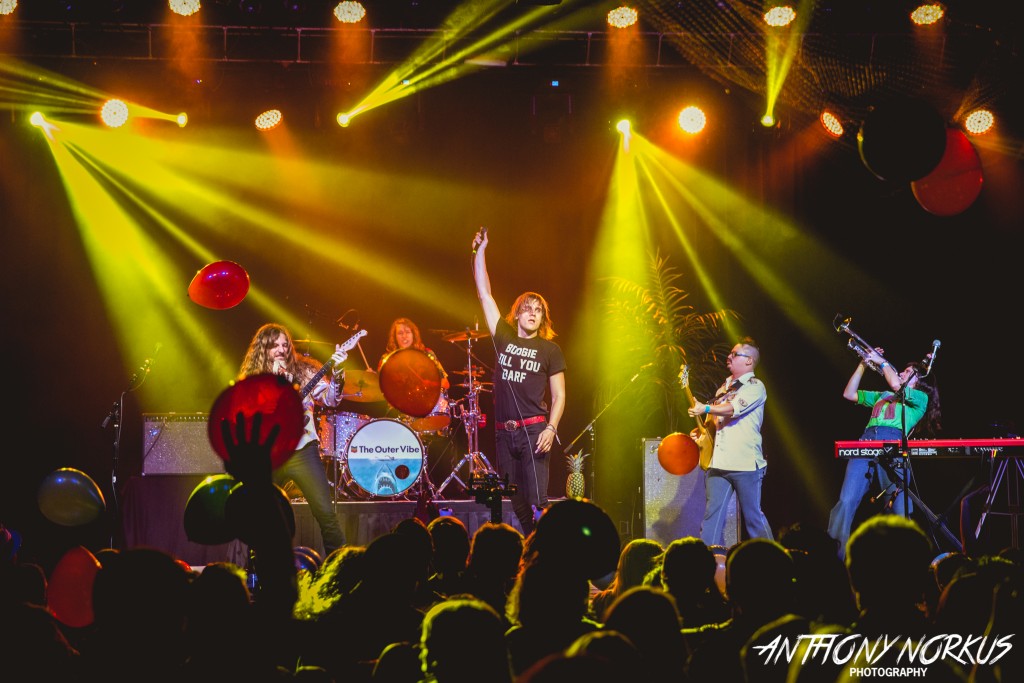 Live Triumph: The Outer Vibe uncorked an April spectacle at The Intersection, captured in a live album. (Photo/Anthony Norkus)

Like some of the best albums from the ’70s, “Panacea” deftly weaves in elements of blues, country, soul, honky-tonk and more into its rock tapestry without ever sounding like that’s what The Legal Immigrants are trying to do. That’s the beauty of this Grand Rapids band and chief songwriter/frontman Joe “Boots” Bockheim. It all just spills out naturally, like some sweet and strong magical potion touting the healing power of rock ‘n’ roll. Part of that can be attributed to the fresh, muscular production and recording by Tommy Schichtel of Goon Lagoon studios. But it also speaks to Bockheim’s clever and insanely catchy songs which ascend to new heights on the band’s third album. From the opening, raw blues-rock fury of “Today’s Catastrophe,” to The Beastie Boys-meet-Iron Butterfly party thrasher, “Hollywood,” to the poignant, Led Zep- and Beatles-inspired epic closer, “Impossible,” it’s a sonically pleasing affair boasting Ben Taber’s impeccable guitar work and the rhythm section tandem of Kevin Kitsch and Marcus James. For listeners, it means that this album may be the perfect salve for what ails you, or as the band puts it on the medicine-show cover for “Panacea”: “Good for man or beast.” – John Sinkevics
Website: http://www.thelegalimmigrants.com/
Upcoming Shows: Sept. 12 at the Eastown Street Fair in Grand Rapids
Listen: “Hollywood”

As familiar as Kari Lynch may be to West Michigan country audiences, “Little Games” reveals that her talent spans more than just a single genre. Her opening musical tale, “West Texas Ground,” resonates with twangy rock and Americana textures, followed immediately by the bluesy rock ballad, “Nothin’ That a Shot Won’t Fix.” And traces of indie-pop and folk emerge elsewhere on this well-crafted, 10-track affair recorded at Nashville’s Sound Emporium Studios with Andy Sheridan. Of course, Lynch isn’t shy about flaunting her country roots, either, with classic hooks propelling the tracks “Can’t Move On,” “This is Gonna Hurt,” “One More Hit” and “Two to be Lonely,” the closing honky-tonkin’ track that features a robust duet with Travis Stinson. And if all was fair in the world, “Sweetheart” would be a No. 1 hit on country radio. But that’s the nature of that ultra-competitive genre, and Lynch’s chart success may still be coming. Because on “Little Games,” Lynch proves her mettle as a first-rate songwriter and collaborator whose striking voice simply elevates her music. – John Sinkevics
Website: http://karilynch.com/
Upcoming Shows: 5 p.m. Friday (Aug. 26) at Coral Gables in Saugatuck; Aug. 31 at Two Old Hippies in Nashville; Sept. 5 at Arts, Beats & Eats in Royal Oak; Sept. 8 at Elk Brewing in Grand Rapids
Listen/Watch: “Sweetheart”

Guitarist and singer Tony Gebhard has created an album that hard rock and heavy metal fans will relish, created by a blind musician and Jenison native who proclaims on his website: “Not handicapped, handicapable.” Songs like the personal and poignant “Dead Eyes” and “Calling Out” take listeners on a roller-coaster ride of brutal verses and melodic choruses. The title track, “Father Forgive Me,” meanwhile, unfurls as a seductive journey of punishing guitar riffs — both dauntingly melodic and fierce — with jarring vocals. The final track, “Home,” changes direction with a light instrumental melody, concluding the album with a sense of serenity and closure. Gebhard proves on this musical foray that he’s a force to be reckoned with.– Hunter Gamble
Website: http://www.tonygebhard.com/home.html
Listen: “Father Forgive Me”

The Outer Vibe
“Live at The Intersection”

The Outer Vibe long ago established itself as one of Grand Rapids’ best, most watchable live bands. So it’s no surprise that when the rock/pop group finally unleashes a live album, it bristles and smolders with the sort of uber-energetic glow that drives its on-stage demeanor. From the opening salvo of “Boy” to the closing splendor of the nationally spotlighted single, “Shining Like a Diamond,” this is 70 minutes of pure Outer Vibe deliciousness, including on-stage banter and invigorating new material such as “Why Don’t You Listen.” It’s also apropos that the 13-track CD was captured at Grand Rapids’ The Intersection, which has essentially served as The Outer Vibe’s home club. As such, this is a rambunctiously sumptuous career retrospective. – John Sinkevics
Website: https://theoutervibe.com/
Upcoming shows: 2 p.m. Sept. 17 at the Cottage Bar Chili Cook-Off in Grand Rapids; 5:30 p.m. Sept. 17 at Perrin Brewery in Comstock Park; Sept. 24 at the Wurst Festival in Dorr
Listen/Watch: “Pink Moon,” Live at The Intersection

Michael Dause
“The Sound of Self-Destruction”

From the lilting, alt-rock-fueled “Doors” that introduces “The Sound of Self-Destruction,” it’s clear that Michael Dause isn’t up to his usual indie-folk tricks. The drummer for The Accidentals proves definitively on his second full-length solo album that there’s much more to this multi-instrumentalist than that engaging smile frequently flashed behind his kit. This nine-track fusillade of atmospheric pop, prog-rock, new wave and indie-rock not only shows off Dause’s suave vocals but his impressive song arrangements — a flurry of complex rhythms, multi-instrumental glory (Dause plays guitar, bass, drums, piano and tin flute) and some surprisingly catchy hooks amid a moody mélange of original material. Produced by Dause, mixed at Traverse City’s HaloHorn Studios and recorded over a four-year period, the album does feature guest appearances by The Accidentals’ Sav Buist and Katie Larson on “I Fell,” but this album has more in common with artists such as Death Cab for Cutie, The Police, Neutral Milk Hotel and Beck – and that puts Dause in very good company indeed. – John Sinkevics
Website: http://www.michaeldause.com/
Upcoming Shows: Sept. 14 at SpeakEZ Lounge in Grand Rapids, Sept. 16 at Earthwork Harvest Gathering outside Lake City
Listen: “Rain in a Bookcase”

Jonny Carroll
“Leaving on the Light”

Jonny Carroll has the kind of voice that grabs you from the get-go. Part Art Garfunkel, part Michael Penn and part Glen Hansard, Carroll infuses every word with poignant passion and heartfelt emotion. And while his voice will draw you in, it’s Carroll’s songs that will keep you there. The tracks “Leaving on the Light” and “When I’m Alive” – among others on this seven-song recording – are at once haunting, melancholy and hook-filled, the sort of material that rolls through your cranium and demands that it be played again. In his own understated yet powerful way, Carroll has crafted one of West Michigan’s most impressive EPs of 2016. – John Sinkevics
Website: https://www.facebook.com/JonnyCarrollMusic
Upcoming Shows: Friday and Saturday at Bistro on the Green on Mackinac Island;
Listen/Watch: “Leaving on the Light” (Live/Jacksonopolis)

East Lansing folk duo Westrin & Mowry manage to make folk and Americana sound fresh and new. Raspy yet clean vocals, lilting acoustic guitars and subtle use of violin and steel guitar come together to make an album all its own. “Love Already Gone” paints a beautifully poignant portrait with its delicate use of violin. “Rogues for Love,” although simple in sound, leaves a powerful lasting impression with its gorgeous vocals and moody instrumentation. All in all, Brian Westrin and Peter Mowry have created a simple, charming and stirring experience. – Hunter Gamble
Website: http://www.westrinandmowry.com/
Listen: “Rogues for Love”