The June festival at Shagbark Farm features Greensky Bluegrass, Peter Rowan and more. Plus, Memorial Day weekend’s Buses by the Beach will return this year and has revealed its lineup, too. Poised to celebrate its return after a two-year hiatus in a brand new West Michigan location, Camp Greensky will fire up Shagbark Farm in early June with Greensky Bluegrass, Little Feat, Sammy Rae, Peter Rowan and Steppin’ In It.

Organizers announced this week that the June 2-4 festival outside Caledonia will offer up three straight nights of performances by Kalamazoo progressive bluegrass faves Greensky Bluegrass, with a host of other national and regional stars in the lineup.

The iconic and eclectic Little Feat will bring its 45th anniversary tour behind “Waiting for Columbus” to the festival on Saturday night, joining rock guitarist Steve Kimock & Friends, TK & The Holy Know Nothings, Jon Stickley Trio and phoffman (aka Paul Hoffman of Greensky Bluegrass) on that day’s bill. Little Feat played the second night of its “Waiting for Columbus” tour at Kalamazoo State Theatre in early March. In addition to Greensky, Thursday’s opening salvo will feature the return of Michigan’s ever-popular Steppin’ In It, a rootsy super-group which celebrated its 20th anniversary in 2018.

Weekend passes — $75-$185 – are available online here, with day pass options also on sale. All tickets previously purchased for the 2020 festival when the pandemic forced its cancellation will be honored for 2022.

The band gushed that it’s “thrilled” to welcome fans to the festival’s new home at Shagbark Farm south of Grand Rapids, a site that hosts the annual Cowpie Music Festival in August. The farm presented Greensky Bluegrass for a special three-day event last July.

Bruzza called the site “nothing short of fantastic.” View coverage of past Camp Greensky festivals at Local Spins here.

The week before Camp Greensky, another festival with a devoted audience will return after a long hiatus, too.

Bus Benefit 2022, hosted by Buses by the Beach, recently announced its lineup for a lakeshore event that will help kick off this summer’s festival season over Memorial Day weekend.

The festival will rev up its engines at Camp Blodgett south of Grand Haven for the first time since 2019 with sets by regional artists Nicholas James & The Bandwagon, The Waverlys, Patty PerShayla & The Mayhaps, Nathan Walton & The Remedy, Roosevelt Diggs, Elijah Russ Collective, Ernie Clark & The Magnificent Bastards, Loren Johnson and The Fat Animals. 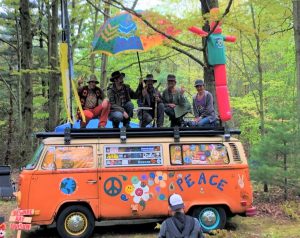 The May 27-30 event which raises funds for the Phoenix Society for Burn Survivors attracts a large contingent of VW bus owners as well as Michigan music devotees.

“We’re thrilled to be returning to Buses by the Beach,” said Thomasma, a longtime attendee and performer at the festival along Lake Michigan.

Rustic camping, a raffle, silent auction, family and children’s activities and a community breakfast also are part of the Bus Benefit. View the daily schedule and get details here.

Earlybird tickets (available through April) are $75 for the weekend, with advance tickets rising to $95 in May and $125 at the gate that weekend. Get tickets here.

And check out the full roster of summer festivals in Local Spins’ Michigan Music Festivals 2022 Guide.