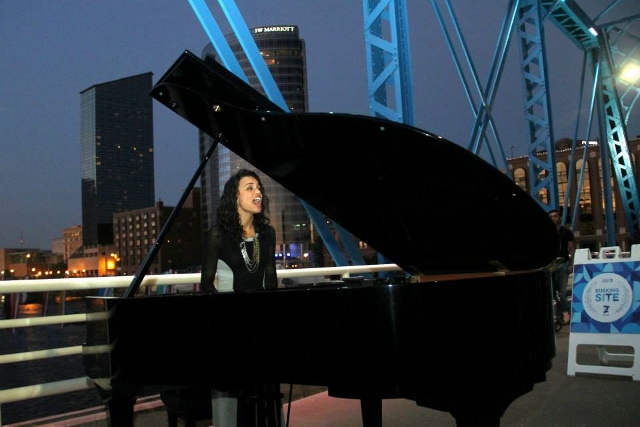 Bridge to the Top: Amanda Vernon won the pop/electronic category in the song contest hosted by St. Cecilia Music Center. She performed last week on the Blue Bridge. (Photo/Kathy Barth)

The Top 10 vote-getters in ArtPrize are still stumping for public support to win the big kahuna, but five West Michigan songwriters/bands who entered compositions into the international art competition already have won $2,000 prizes for their musical artworks from St. Cecilia Music Center. 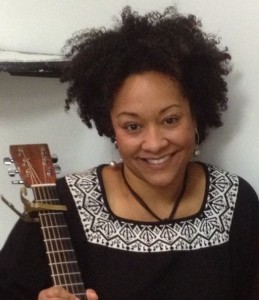 As a result, each artist will receive $2,000 as part of a separate award from St. Cecilia Music Center, along with $1,000 in recording time at Mackinaw Harvest Music in Grand Rapids.

It’s the second year that St. Cecilia has awarded cash prizes to songwriters who garner the most ArtPrize votes and the third year that songs have been part of the ArtPrize competition. Fifty of the entrants performed at St. Cecilia during the ArtPrize Musicians’ Showcase the first weekend of ArtPrize.

Wilson, aka Karisa Sprite, was “elated” by the award and “so grateful for my band members (Jake Gerard, Fred Knapp and Russell Gorton) who performed with me and helped make the live performance so special” as well as St. Cecilia executive director Cathy Holbrook for “making it possible and comfortable, and all the friends who voted.” She also stressed that she hoped the attention could “bring some awareness” to the Children’s Assessment Center (which helps young victims who’ve been sexually assaulted) for whom she wrote the song.

Bear Yovino, who represents Brad Fritcher + trois, reports that the band – which he calls “a hidden treasure” in West Michigan – was “stoked” upon hearing the good news about the award, which Yovino says is proof that “the growth of the band will come sooner than anticipated.” 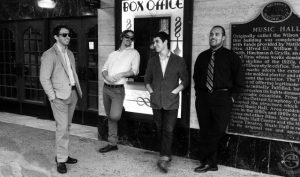 “We now have an open door to record the new album, provide hard copy CDs for sale, and maybe offer a limited edition vinyl. We are all very thankful,” he told Local Spins. “This could not have come at a better time for everyone involved. … They are professional, true to themselves, true to their music, and true to their fans.”

For Bouwsma-Schultz, the win left her “very grateful” for the support of friends, family and new fans who heard her sing during ArtPrize. She produced the song with help from her husband and keyboard player Scott Schultz. “This song is very personal, moody, and different than what I often do so people were hearing me in a different way,” she noted. “I’m glad they enjoyed it. … I feel like I have a very supportive community.”

Hansen, meanwhile, concedes he was “somewhat surprised” by winning the classical category because past winner Shannon Wood had entered again, along with composer Alexander Miller.

“There was some stiff competition. My work was designed to be fun, light and to call musicians for all ages together in to an inter-generational musical experience,” he said. “I believe my goal was met had the work won or not. But it was a thrill to have so many people vote for it and vote for the concept. I did spend some money pulling this all together, so the prize money will help defray those costs. And I’ll throw a party for all those that played. It has been a great musical ride.” 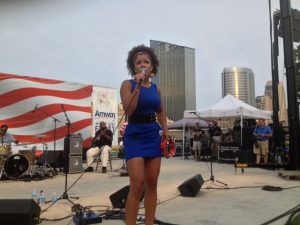 (He and his band, along with the Hark Up Horns Big Band will perform again at 6 p.m. Tuesday at Rosa Parks Circle.)

All of this year’s winners have a West Michigan connection, whether living in Grand Rapids or, in the case of members of Brad Fritcher + trois, attending Grand Valley State University and Grand Rapids Community College.

Read more about last week’s ArtPrize Musicians’ Showcase featuring more than four dozen song entrants online here and watch some video highlights below. Many of them also have performed at ArtPrize “busking” stations around town, with Vernon perhaps uncorking the most dramatic set on a grand piano delivered to the Blue Bridge over the Grand River by Keyboard World (as you can see from the photo at the top of this post).

Not surprisingly, Vernon called news of her win “a wonderful moment,” because she heard the announcement live on television with her family, which broke into “huge applause.” Catch Vernon live during Local Spins Live at 10 a.m. Wednesday on News Talk 1340 AM (WJRW) when she’ll be my musical guest. 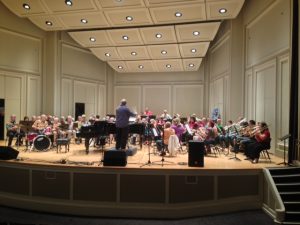 Chris Hansen directed a very big band at St. Cecilia during the showcase.

• Folk/Country: Karisa Wilson’s “The Courage of One” (Listen to it online here.) For more about Wilson, read her Musicians’ Soundboard guest column at Local Spins and visit her website at karisawilson.com.

• Rock/Blues: Molly Bouwsma-Schultz’s “In My Heart (To the Moon)” (Listen to it online here; here’s the link to Blue Molly’s website.)

• Pop/Electronic: Amanda Vernon’s “Cleaning and Scrubbing” (Listen to it online here and visit her official website.)

• Classical: Chris R. Hansen’s “The Grand Rapids Shuffle” (Listen to it online here and find more about Hansen at his Facebook page.)