The veteran artist releases his CD at Louie’s Back Room Friday night (May 12), with a sneak preview for Local Spins on WYCE, which also featured new tracks by Mid-Life Crisis, Willamena, Mark Lavengood, Jake Kershaw, J. Snell, Tail from the Crypt and more. (Podcast, videos) 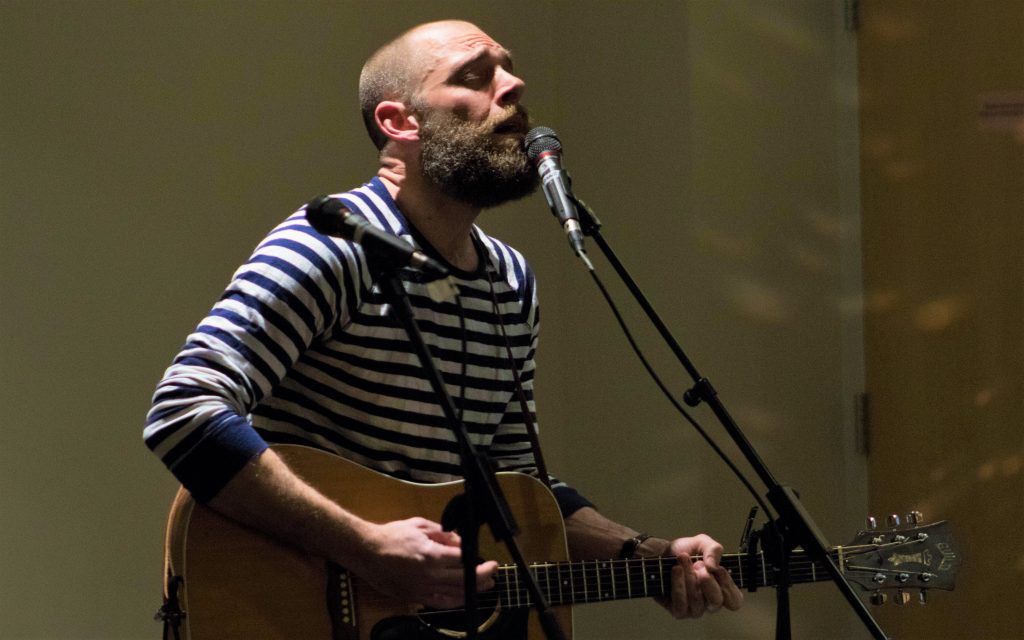 SCROLL DOWN FOR VIDEOS, PODCAST

For a veteran singer-songwriter who has tugged at the heartstrings of listeners for more than three decades, it’s saying a lot that Kalamazoo singer-songwriter Brian Koenigsknecht considers his latest album the best of his career. 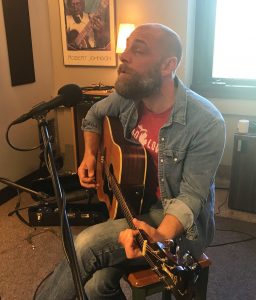 On the Air: Brian Koenigsknecht performing for Local Spins on WYCE. (Photo/Local Spins)

“I feel that it is my best work ever and I really can’t wait to share it with the world,” Koenigknecht says of “From the Shallows to the Deep,” a melancholy but uplifting collection sparked by the ups and downs of coping with bipolar disorder and his father’s stroke while embracing Michigan’s robust music community.

“I have always wanted to move people with my voice and songs, to make them feel something or remember someone they haven’t thought of in some time. I have always been as much of a music fan as a musician.”

To that end, many members of Kalamazoo’s music community who count Koenigsknecht as a fan will be on hand and performing Friday night (May 12) when Koenigknecht officially releases the new album at Louie’s Back Room/Trophy House Grill.

“This album is about the Kalamazoo music scene as much as it is about me. Many of these artists struggle every day with feeling their art is relevant. I want to put on a show that showcases not just the album, but everyone who appeared on it.”

Koenigsknecht previewed that show this week with his Local Spins on WYCE debut. Listen to the radio podcast here and watch a video below. (This week’s episode of Local Spins on WYCE also featured the debut of new songs by Mid-Life Crisis, Mark Lavengood, Willamena, J. Snell, Tail from the Crypt, Jake Kershaw, Olivia Mainville & The Aquatic Troupe and Hannah Rose & The Gravestones, plus music from Patrick Carroll, the “musician’s pick” of the week.)

For Koenigsknecht, 43, the journey leading up to his third solo album actually started at age 9 when his father taught him how to play Neil Young’s “Heart of Gold” on guitar and harmonica. He grew up playing with the family at churches, festivals and schools, and started writing music and playing coffee houses while a student at Northern Michigan University in Marquette. 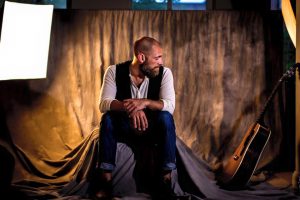 As Much of a Music Fan as a Musician: Brian Koenigsknecht (Photo/Casey Spring)

He moved to Kalamazoo in 1998, establishing himself as in-demand act and as a member of the band Pillar to Post. His voice has been compared to David Gray and Ray LaMontagne, and he’s performed regularly at venues ranging from Bell’s Brewery to Kalamazoo State Theatre.

“I write songs inspired by my life, the lives around me and a world that I am grateful for and feel is worth saving with the hope to move the listener to feel, to think, and to action,” he says, noting that his latest album actually started with a sobering concept.

“My new album began as a suicide letter really: If I were gone tomorrow, how would I want people to remember me? I had almost given up on music, my family and life. Coming to terms with my depression and reaching out for help, I began to turn my life around,” he says.

“I turned to doctors for my bipolar disorder and my family for support and to the Kalamazoo music community for inspiration.” 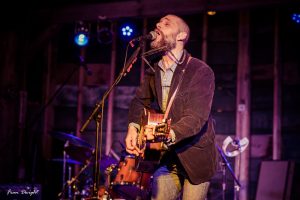 Showcasing the Kalamazoo Music Scene: Koenigsknecht’s CD-release show will do that. (Photo/Fran Dwight)

The resulting project of deeply personal tunes – recorded and produced by Brad Frank (Pillar to Post) at Knob and Tube Sound Studio in Kalamazoo – at once dark and hopeful. Assisting Koenigsknecht in the studio were several special musical guests, including Samantha Cooper, Megan Dooley, Matthew Borr, Carrie McFerrin, John Ford and others.

“This new album was the source of therapy. I was writing stories or ideas and it wasn’t until I put them all together and found the constant theme of a darkness searching for light,” Koenigsknecht offers.

“The healing began after the writing when I began asking for help not only with the album, but my depression. So many wonderful musicians offered their time and love to these songs. I grew closer with all of them and now as I perform these songs, I feel the healing. … ‘From The Shallows To The Deep’ has changed my life for the better, for my family and my friends. And that makes it a success to me.”

VIDEO: Brian Koenigknecht, Promotional Video for “From the Shallows to the Deep”