The celebrated Grand Rapids film and music critic gets fans ready for Slayer’s farewell fusillade at Van Andel Arena on Tuesday with a scary-good soundtrack of metal mayhem, in vintage Serba fashion. 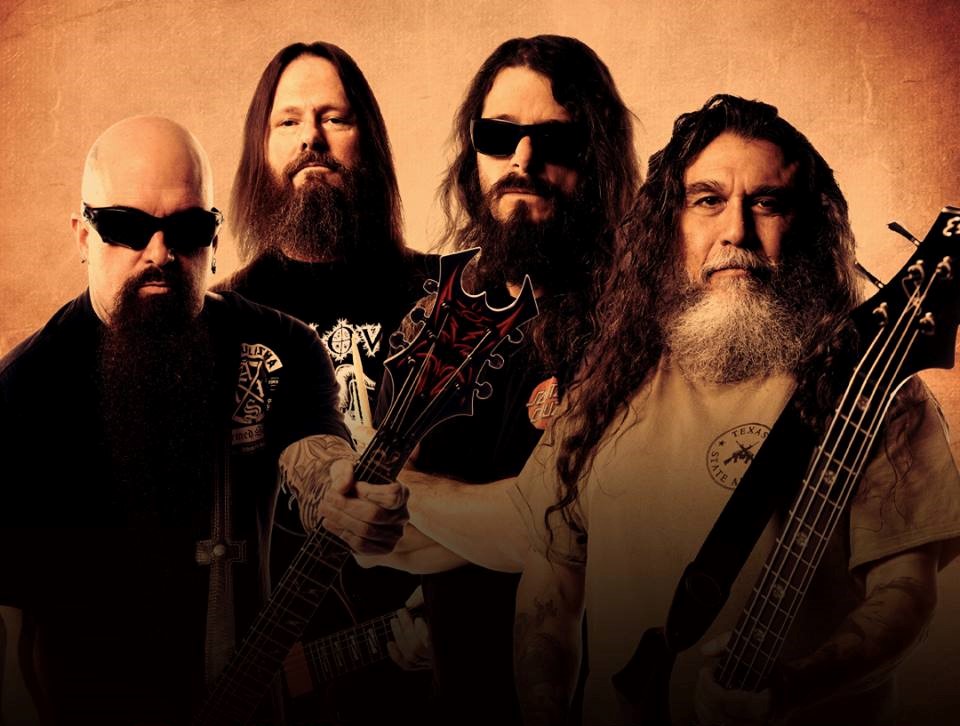 It’s the type of assaultive lineup that flares the ol’ tinnitus months before the show even happens. If all goes as planned, it’ll be a right proper retirement party for Slayer, who are calling it quits after 35-plus years of hailing Satan.

The tour flies on flaming demon wings to Van Andel Arena Tuesday, and in anticipation of the inevitable aural bloodletting, I summoned my Dad Thrash/Bullshit Old Guy Metal self by pouring six Miller High Lifes into the fabric of an old denim jacket and reciting the lyrics to “Master of Puppets” backwards thrice. The entity then assembled the following annotated primer playlist: two tracks for each band (even Lamb of God, whose appeal in 2018 mostly eludes me), one an essential, universal favorite of rivetheaded punters, and the other, a deeper cut, a gem we hope gets dropped into the set list.

Turn it up, rip the knob off, and regret the repair bill.

“Angel of Death” (from “Reign in Blood,” 1986) – Like Venom, your evening’s hellish headliner wholesale carved a career from the bleeding marble of Satanic hooey, its album covers oozing and dripping with terrifying depictions of existential post-biblical zombie-Christ armageddon horror. Of course, it was all bullshit, purposeful provocation delivered with conviction, but designed to sell T-shirts; I mean, they don’t actually believe this baloney like King Diamond does. That’s why Slayer’s serial-killer and war-is-hell terrible-truth tracks cut the deepest – case in point, “Angel of Death,” an unblinkingly terrifying illustration of Nazi anti-human Josef Mengele. The song is hyper-speed thrash with double-bass beats and squealing-rodent guitar solos that define the core Slayer aesthetic co-opted by an endless legion of deathly metallic proteges. Recorded with then-innovative reverb-free kick-in-the-face directness by Rick Rubin, it opens with a blood-curdling Tom Araya scream surely intended to emulate the people on the business end of Mengele’s infamously inhumane medical experiments. Of course it’s a controversial song, bringing up the question as to whether Slayer was engaging in exploitation or simply depicting the human creature’s capacity for evil. It’s more of the latter and a little of the former, I’d assert. But every Slayer concert from here to eternity will feature “Angel of Death” prominently.

“Spill the Blood” (from “South of Heaven,” 1988) – The eternal question: Fast Slayer or slow Slayer? The correct answer is yes. All of it. Please. Thank you. “South of Heaven,” the track, initiated the eerie, slow-bleed songwriting formula the band employed as a reaction to playing so famously fast on “Reign in Blood” – therefore, the Slayer power ballad, for lack of a more respectful phrase. Dig deep on “South of Heaven,” the album, and you’ll find closer “Spill the Blood,” a coagulated gem of laconic, evil vocals, tyrannical drums and big ugly chords hanging open like a freshly butchered kill. And the pick scrapes! Jesus, the pick scrapes. They’re unholy.

“Redneck” (from “Sacrament,” 2006) – There’s a thick, hairy groove embedded in this put-up-yer-dukes rager, Lamb of God’s biggest commercial hit. Frankly, it sounds like Pantera worship. Maybe that’s why it’s popular. If I sound unenthused, it’s because LoG is the tour’s weak link, despite being a considerable draw. (Maybe this mostly new-millennium band isn’t old and Dad Thrash enough.) Admittedly, the big riff in this cut is pretty irresistible, tickling the mosh cockles despite my resistance to the one-dimensional vocal scrapes and macho lyrics.

“Black Label” (from “New American Gospel,” 2000) – Turn-of-the-century Lamb of God has a chaotic quality to it that’s more appealing than their later material. “Black Label” thrashes mighty at a few different speeds within a complex arrangement, and the production is absurdly parched, dry as a sack of year-old peanut butter cookies. Again, the vocal is all dehydrated warthog howls, and I’ll be damned if it isn’t another backwards rub down the cat’s back.

“Caught in a Mosh” (from “Among the Living,” 1987) – Somewhere in this propulsive pit agitator is a metaphor illustrating the quagmire of stupidity that modern society can be – how often do you feel caught up in the absurd mania, the mosh, of life? (The correct answer is “every day,” friends.) This is peak Anthrax: a riff almost off the rails, an angry lyric tempered by bits of spitting comedy, bashing hardcore drums, and the don’t-eff-with-me NYC sensibility roiling around in the subtext. It’s perfectly written and executed thrash. If it’s not one of the first three tracks on the classic thrash mix blaring from your Trans Am tape deck, consider your license to headbang revoked.

“Lone Justice” (from “Spreading the Disease,” 1985) – Although Anthrax’s rep is for thrashing hard and thrashing mighty, its early work reflects the classic metal of Sabbath, Priest and Maiden. “Lone Justice” is a melodic true ’banger with a lean arrangement, tasty bass playing and power riffs. It’s all bone and muscle, metal in its purest form.

– This thrash classic is the full weight of an avalanche of sides of beef falling on you. Thrash gone too wild can be thin and tinny, rolling out the headbanger polka barrel, but Testament always reeled off riffs that take some serious benchpressing, even when they’re fired off lickety-split. “Disciples of the Watch” is the quintessential Testament battery, 51% savage and 49% smart, fissures erupting with every thundering riff. It’s made even heavier by Chuck Billy’s roar – when he dragon-bellows “OBEYYYYY” you’ll swear the guy has the lung capacity of an Olympic swimming pool.

“Sins of Omission” (from “Practice What You Preach,” 1989) – A slight nudge of the ball in the Testament pinball machine, and the transition from “Disciples” to “Sins” is made. It’s an accomplished track, sophisticated in its aggression, sneakily melodic, complex without being showy – 51% smart, 49% savage. Alex Skolnick’s lead guitar work is exquisite, invigorating in a tasteful way, layered atop an onslaught of elaborately crocheted Eric Peterson riffery. Honestly, Testament was a consistent source of thrash for the discerning ’banger, and a dozen-and-a-half tracks could fill this slot in the mix (even some great stuff from the last decade’s return-to-relevancy period). But “Sins of Omission” makes the cut for being a true fan favorite, a one-time live staple plucked from the deep end of a reasonably popular record. You won’t find any sin on this playlist, thank you.

– The “godfathers of grindcore” experimented with extreme brevity early in their career, work that can be interpreted as a punk-derived reaction to progressive rock, conventional song structures and, well, anything remotely comprehensible. The lyric addresses an unavoidable element of the human condition via a frustrated roar and blast of noise, which function as primal release. Perhaps there’s a metaphor embedded in this track, a representation of life feeling very, very short in retrospect, a universal howl of pain addressing the cruel concision of our existence. Of course, by now you’ve spent a significantly longer time reading these words than you would have spent listening to the song, which is less than two seconds long. It’s surely a misrepresentation to call “You Suffer” Napalm Death’s biggest, most popular song, but it certainly is the band’s most notorious composition.

“Metaphorically Screw You” (from “Apex Predator – Easy Meat,” 2015) – Throw a poison dart at any portion of Napalm’s 15-album, three-decade-plus discography and you’re likely to hit a nuclear blosh that’ll take your head clean off with one swing of a knotted shillelagh. I eyeballed their “lost” album, 2000’s ultra-savage “Enemy of the Music Business,” for a mean one (news flash: they’re all mean), but decided to bookend golden-oldie “You Suffer” with something from Napalm’s latest, “Apex Predator – Easy Meat,” to illustrate the band’s vitality so deep in its career. “Metaphorically Screw You” synthesizes any and all feelings of political dismay into two minutes of graceless violence. Lyrically, it’s quite adroit, because these are angry, aging, well-spoken men with serious chips on their shoulders due to a general worldwide proliferation of inequality, injustice and other cruel civil concepts. Not that they’re hippies or something – no, they want better policy, you homunculi. Napalm has mountains of this type of stuff. Mountains. It’s easy to admire from afar, but much better up close and with a pneumatic drill. Fire up the entire discography for a whole day of priapic raging socialist metal.

THE SLAYER FAREWELL TOUR PLAYLIST BY JOHN SERBA AT SPOTIFY


John Serba is a veteran film and rock critic, formerly of MLive.com and The Grand Rapids Press. Read his current work at johnserbaatlarge.com, and listen to his Bullshit Old Guy Metal podcast here. And come back to Local Spins Wednesday for his review of Slayer’s Grand Rapids show.