The Michigan band going ‘really hard’ this summer will join three other regional faves at the unique West Side venue on Friday. The Local Spins interview with frontman Joe Hertler, plus show details. Loving Those Outdoor Shows: Joe Hertler plans to hit it out of the ballpark musically. (Photo Anna Sink)

The last time I sat down with Joe Hertler was in a hotel room full of musicians at Mile of Music Festival in Appleton, Wis. We sipped late-night beers in the corner of the room, exhausted from a whirlwind of sets at the festival.

This time we meet via video link. Hertler is at home in his studio in Lansing, surrounded by gear and recording equipment. Just over his shoulder in the corner of the room is an upright piano with a microphone hovering overhead where Hertler has spent much of his pandemic time.

“This is where I sit all day. I wouldn’t want it any other way. I’ve been practicing the hell out of the piano. Probably playing it three hours a day. I’ve been going really hard,” Hertler says.

Joe Hertler & the Rainbow Seekers aim to go “really hard” on stage Friday (Sept. 3) at Sullivan Field on Grand Rapids’ West Side. The show, billed as “Ballpark Jam ‘21,” will also feature sets by The Legal Immigrants, Groove Ground and The Hacky Turtles. 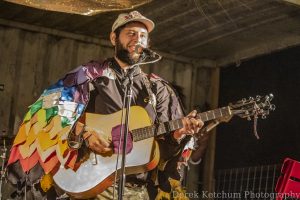 Touring the Country: After a busy summer, Hertler and band play a half-dozen dates in September. (Photo/Derek Ketchum)

Tickets are $26 and available online at eventbrite.com. Gates open at 5 p.m.; attendees are encouraged to bring blankets and bag chairs.

Food and beverages will be available for sale on-site. The show is hosted by Fans of Valley Field, an organization dedicated to restoring and revitalizing the historic field, and Pik-Nik, a production adoption company based in Grand Rapids that’s hosted previous performances at the historic field located at 650 Valley Ave. NW.

“Outdoor shows are where our band thrives. I like playing outside. There’s a lot of cool history at Sullivan Field. The people behind it are awesome,” Hertler says of Friday’s mini-fest.

“We’ll be testing out some new material. There’s no comparing a Michigan show to anywhere else. It’s going to be good to perform at home and feel like we’re a part of our state.”

FESTIVALS, CAMPING, PADDLING AND RECORDING A NEW ALBUM IN NASHVILLE

The Rainbow Seekers have stayed busy throughout the pandemic, writing and recording, and as of late playing shows around the country. Most recently, the Lansing band trekked out to the much-admired Summer Camp Music Festival in Chillicothe, Ill.

The band — which unfurls a distinctive blend of soul, funk, pop, rock, folk and more — plays six shows or festivals across the Midwest in September alone, including a return to Bell’s Brewery Eccentric Cafe in Kalamazoo on Sept. 24.

When he’s not seeking rainbows and sonic bliss, Hertler spends time outdoors, camping and kayaking and going on hikes. Michigan’s beauty has also found its way into his songs. 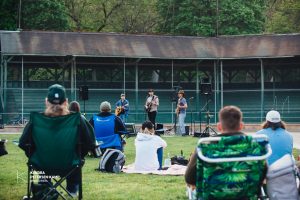 Back at the Ballpark: The Hacky Turtles played Sullivan Field in May, too. (Photo/Kendra Petersen-Kamp)

“I’m a big paddler. Floating is cool. You’re literally on top of the water. It’s like magic. I grew up canoeing and my dad was a big paddler. So it was like reconnecting with something from when I was younger. I love it,” Hertler says with a smile.

His other hobbies include reading, PC video games, cooking, and as of recently, playing the piano. Looking ahead, Hertler and the Rainbow Seekers plan to continue tracking a new LP and performing nationally, while eyeing the ramifications of the continued COVID-19 pandemic.

“We’re playing a bunch of shows around the country. Hopefully, they don’t get canceled. The vast majority of them are outside. We’re recording a new record in Nashville that I’ve been working on for the last two years,” Hertler says of the follow-up to 2019’s “Paper Castle.”

“It’s been really fun going down there and recording. We’re working better together than we ever have. Things feel really smooth. It’s been really reinvigorating. It’s got me pumped.”